Out of the corner of my eye I’ve been watching the progress of creeping drought across a wide swath of the lower 48 states during the fall and winter, and I don’t like what I am seeing in the proverbial tea leaves. Usually La Nina regimes, which we currently have, lead to drier than average conditions across the southern tier of states going into the spring.  Lack of built up snow cover can lead to drought across the northern tier.

Here is the current snow cover:

Notice that there is a “snow hole” over the Dakotas where there is an ongoing long term drought.  Snowfall generally has been less than average over the Midwest and central and southern Rockies, but I’ve seen a lot less this time of year in my 30+ years of being a meteorologist.

By now we all know that global warming leads to longer and more intense periods of extreme drought. What particularly catches my eye is the drought beginning to unfold in Texas. Amarillo, for example, hasn’t seen rain or snow in well over a record shattering 100 days:

Quoting from this Texas Tribune article:

Billy Bob Brown has been farming in the Amarillo area for nearly half a century, and this is the longest dry spell he’s ever seen.

The region hasn’t received measurable rainfall in more than 100 days, according to the National Weather Service, and Brown is worried about the fate of his crops. He already can’t grow corn because it’s been so dry.

“I remember when I was growing up in the 50s and there was three years of drought,” said Brown, who is 78. “This is the worst I’ve seen since then.”

Even areas affected by Harvey are now classified as being in a drought. Also, Southern California is back in a drought classification after the rain that brought an end to the five year drought from 2012-2017 ended last spring. My young up and coming meteorologist friend from Pasadena, Edgar McGregor, has been taking notes of what has been going on with the RRR…the ridiculously resilient ridge:

No rain for Southern California in the heart of the wet season. The past 7 years in a row have recorded only 75% of average precipitation at best, 30% at worst for the LA foothills. I wonder if the RRR is the first case of a climate tipping point. @Weather_West 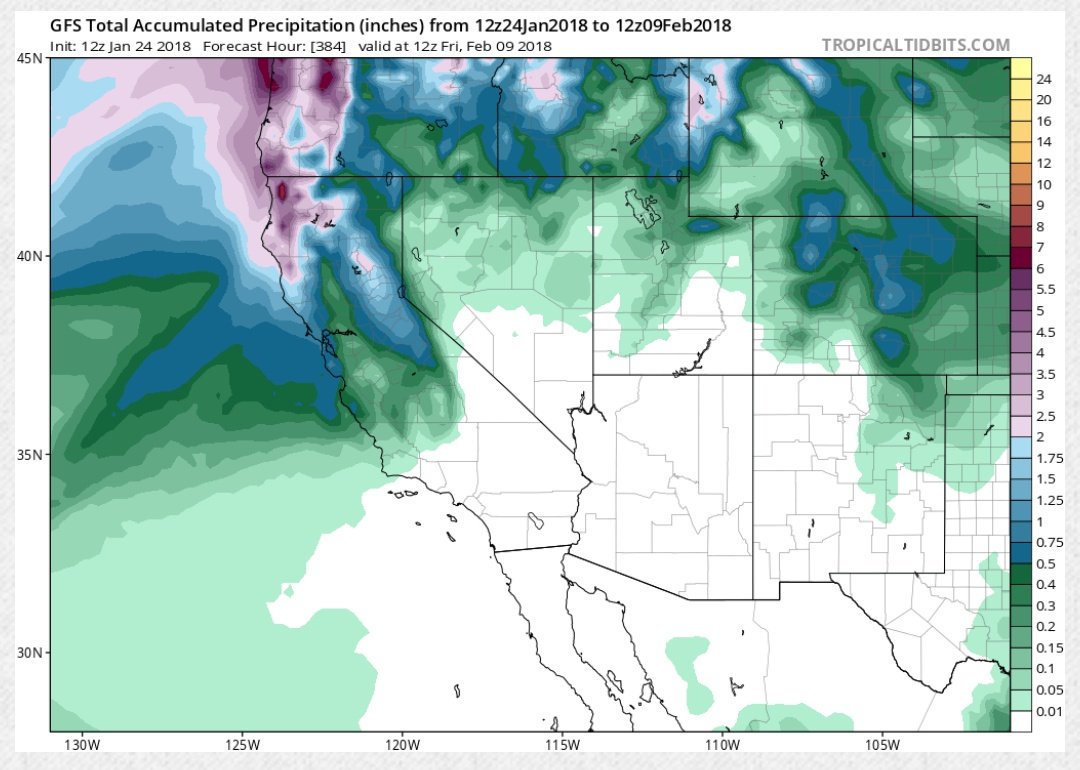 The last time that the U.S. had significant, widespread, continental drought was in 2012, which began on the heels of a near record La Nina in 2011. We’ll see how this one evolves into the spring.

I still don’t see a weather pattern warm enough to produce widespread reports of record ETs, but there may be a few ahead of the next front from the Rockies into the Plains by next Tuesday:

Of course, if I see any reports of extreme temperatures, I’ll post them here