This December I and other meteorologists have been guilty of pointing to usually reliable models and ensembles going out in time to the “medium range” and beyond forecasting big pattern changes to colder weather, and in California’s case wetter weather. Today I’d like to propose that as the globe’s average temperatures have risen, and in particular that of the Arctic’s rising precipitously faster, traditional met models are having a hard time adjusting to new teleconnection regimes such as the “Ridiculous Resilient Ridge.” Weather forecasters should think twice, maybe three times before relying on models forecasting well below average temperatures or breaks in droughts.

I’m starting to see notes such as this:

Despite the incessant posts of impending cold-doom, here are the temperature departures from average for the first 3 weeks in December… 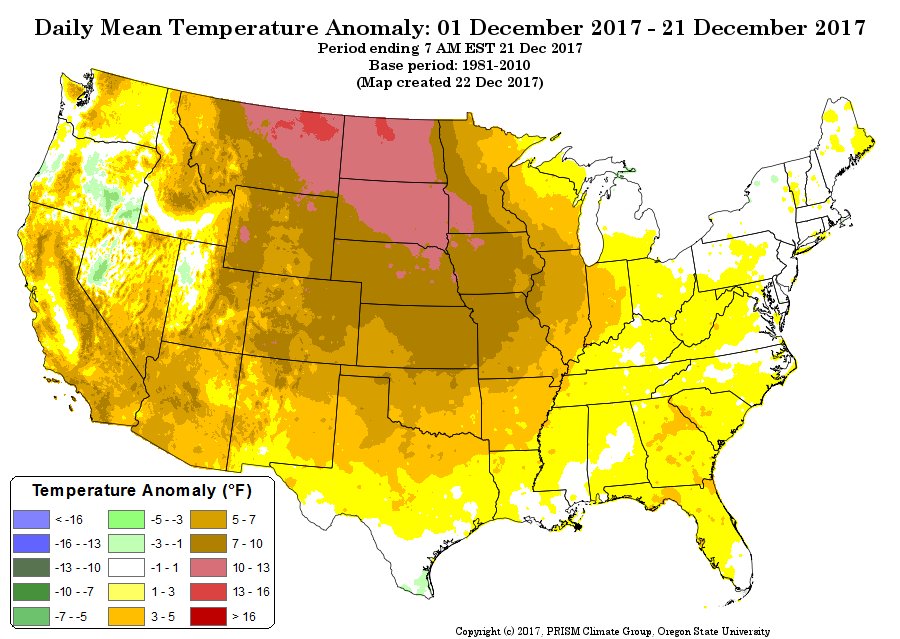 Currently we have a weather pattern across the northern hemisphere that is a head scratcher. Typically when one sees this much ridging over the West and a polar vortex near Hudson Bay, one traditionally trained such as yours truly, would expect to see a cold pattern in the eastern and southern U.S. That just hasn’t happened for late December:

Let’s compare a couple of old and new models valid for Christmas. Here is the latest GFS:

Notice that there are red, above average geopotential heights on the Pivotal chart stretching eastward from California to the Carolina’s. Here is an older version of the GFS valid for the same period:

The differences between the two charts are somewhat subtle to any untrained observor, but notice that the second older chart has the vortex much further south with a deeper trough in the Southeast. This difference is strong enough to go from a temperature regime from this newer forecast:

Here is Dr. Mann’s take on this subject:

“Climate change is built into a NWP run in the sense that the initial condition (i.e. assimilated data) has it already built-in. But the model physics must constantly be “nudged” back toward reality (e.g. what is done in a reanalysis such as ECMWF or NCEP).”

For more in depth reading on this topic see:

Here is the conclusion from the article:

Many examples of ‘stuck’ weather patterns during the past few years come to mind. Deep troughs in the jet stream hung over the U.S. east coast and western Europe during the winters of 2009/2010, 2010/2011 and 2012/2013 bringing a seemingly endless string of snow storms and bone-chilling cold. In the early winter of 2011/2012, in contrast, these same areas were under ridges, which brought unusually warm and snowless conditions, while at the same time a deep trough sat over Alaska, producing record snowfalls. During summer, persistent weather patterns have caused severe droughts and heat waves over the Northern Hemisphere’s continents. The record high temperatures in Europe and Russia have been linked to early snowmelt in Siberia [36]. When Hurricane Sandy tracked up the eastern seaboard during late October 2012, a high-amplitude trough-ridge pattern was in place over North America and the North Atlantic, creating the flow that steered the storm on its unprecedented westward path into New Jersey. A large ridge in the northwest Atlantic generated a strong surface high-pressure cell that, together with Sandy, formed the steep pressure gradient that caused an expansive area of destructive tropical-storm-force winds from Delaware to Nova Scotia. Sandy occurred after a summer of record-shattering Arctic sea-ice loss, but whether the two phenomena were connected is unclear [37].

While it is difficult to say with any certainty that AA is the cause of any particular extreme weather event, these are the types of phenomena that are expected to occur more often as the world continues to warm and the Arctic continues to lose its ice. Clearly, much additional research is needed to understand better the mechanisms by which mid-latitude weather patterns will respond to anthropogenic climate change, and particularly if and how they may be influenced by AA. There is also much to learn about the interplay among AA and modes of natural variability (such as the El Niño Southern Oscillation, Pacific Decadal Oscillation and Atlantic Multidecadal Oscillation). The recent flooding in the UK (winter 2014) and the North America ‘Snowmageddon’ (February 2010), for example, were apparently caused by a combination of Arctic and tropical influences on the jet stream’s configuration [20,21]. Progress can be made by assessing the behaviour and trends in weather patterns by region and season, as the globe—and particularly the Arctic—continue to warm in response to unabated emissions of greenhouse gases.

So, I’d like weather forecasters to shed any cold bias in the future before jumping on the “cold model bandwagon.” In an ever increasingly warm world our reputation depends on it.

Now I really am scared of climate change. I wonder if we can make it through winter without any rainfall at all.  Imagine L.A. going a full year w/o rain. We turn into a desert, and then there is no going back.
Somebody help us…. please… 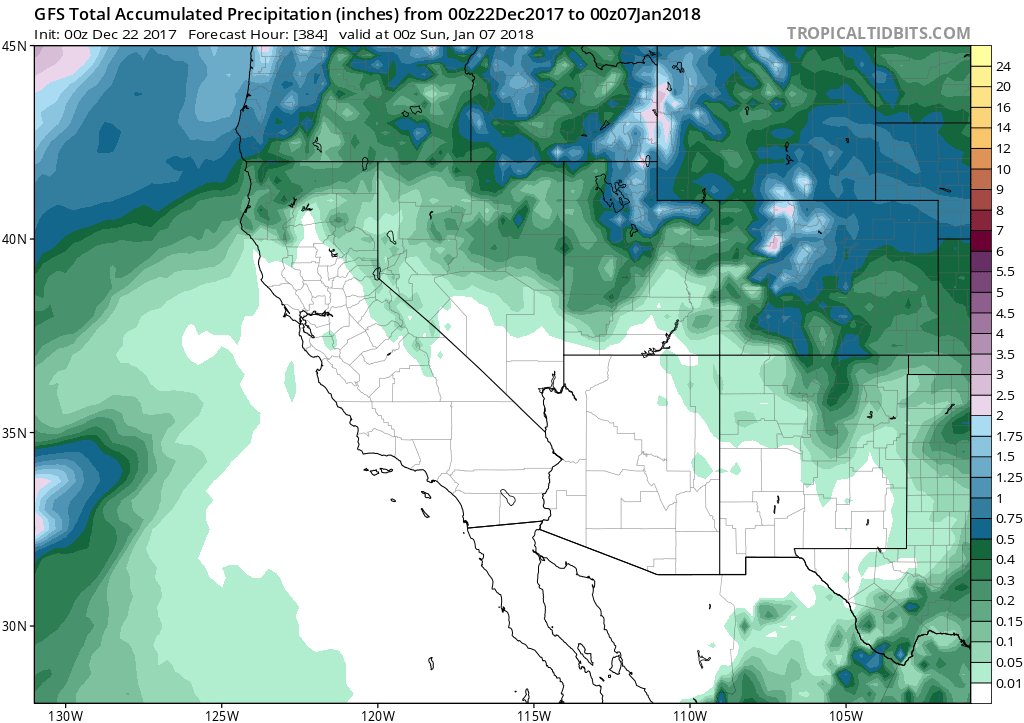 With no rain sight for days, the #ThomasFire is poised to become the largest in California’s history 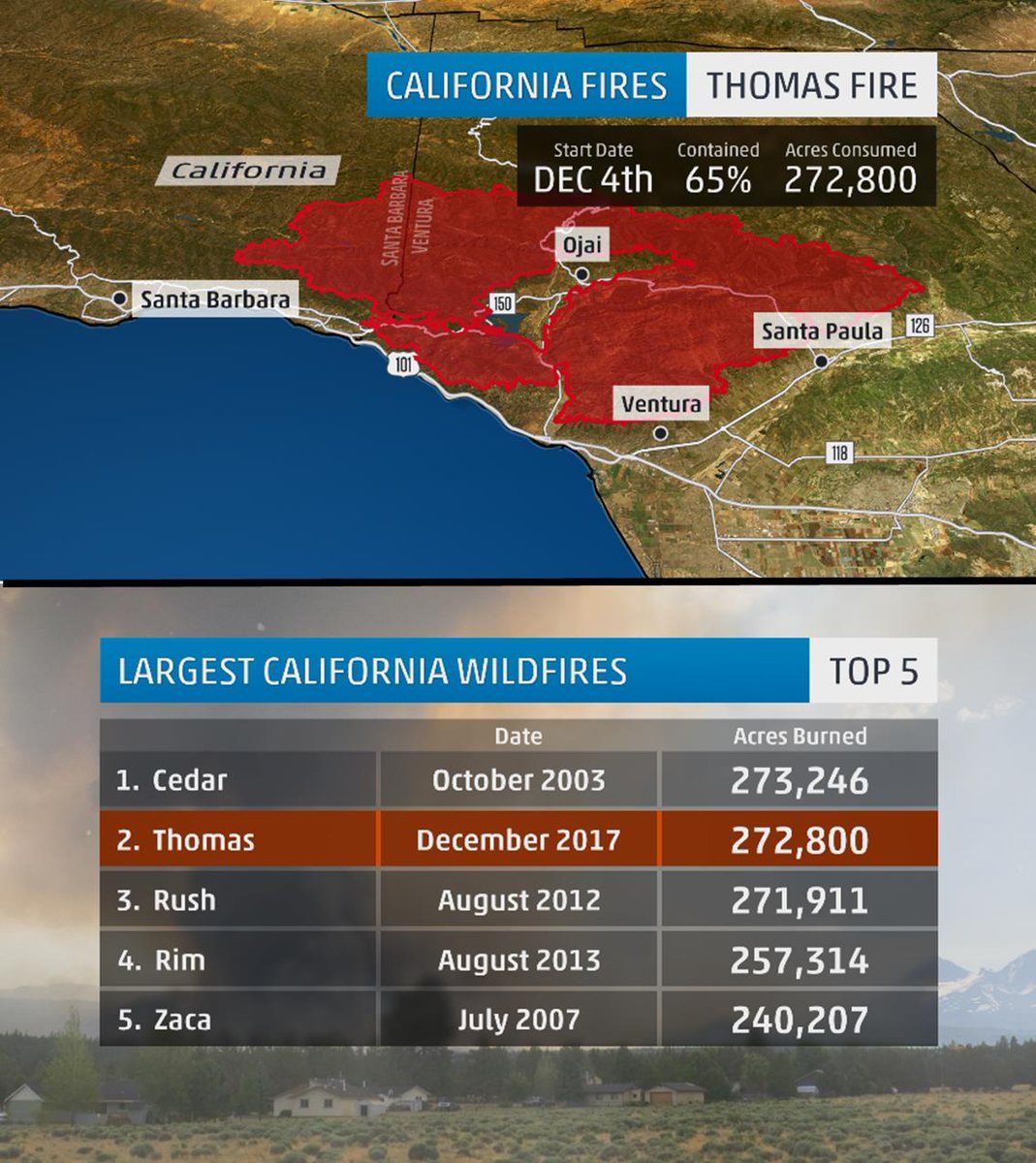 I may add more pertinent information as it crosses my radar later today.

Humbug! It’s close to Christmas, and it’s the first official day of winter, so I’m going to report that traditional snow cover and cold weather are not changing. ER…no. As we all know all four seasons are warming  perceptively as of 2017. Here is one study from Climate Central saying as much:

Growing up in the 1960s and 1970s I can remember much colder times in December across my home state of Georgia. December days with flurries in the air seemed like they were much more common in Atlanta, although there was very little accumulating snow to put people in a traditional holiday spirit. We did see, though, a record shattering mid-December heavy snow event earlier this year, much to my delight for a change.

Some would say that the warming since 1970 has resulted in less travel snarls for the holidays due to less ice and snow across the country, which is true. However, as I often point out, record warmth might be welcome during the winter, but definitely not in August. A warming winter is just another  sign of climate change, segwaying into this note from Bob Henson:

At the risk of being a meteorological Scrooge, the Christmas/New Year’s cold wave doesn’t look like a record-shattering event. Even daily record lows may be hard to come by. Up thru 12/17, this month has seen 87 U.S. daily record lows…and 1292 record highs. 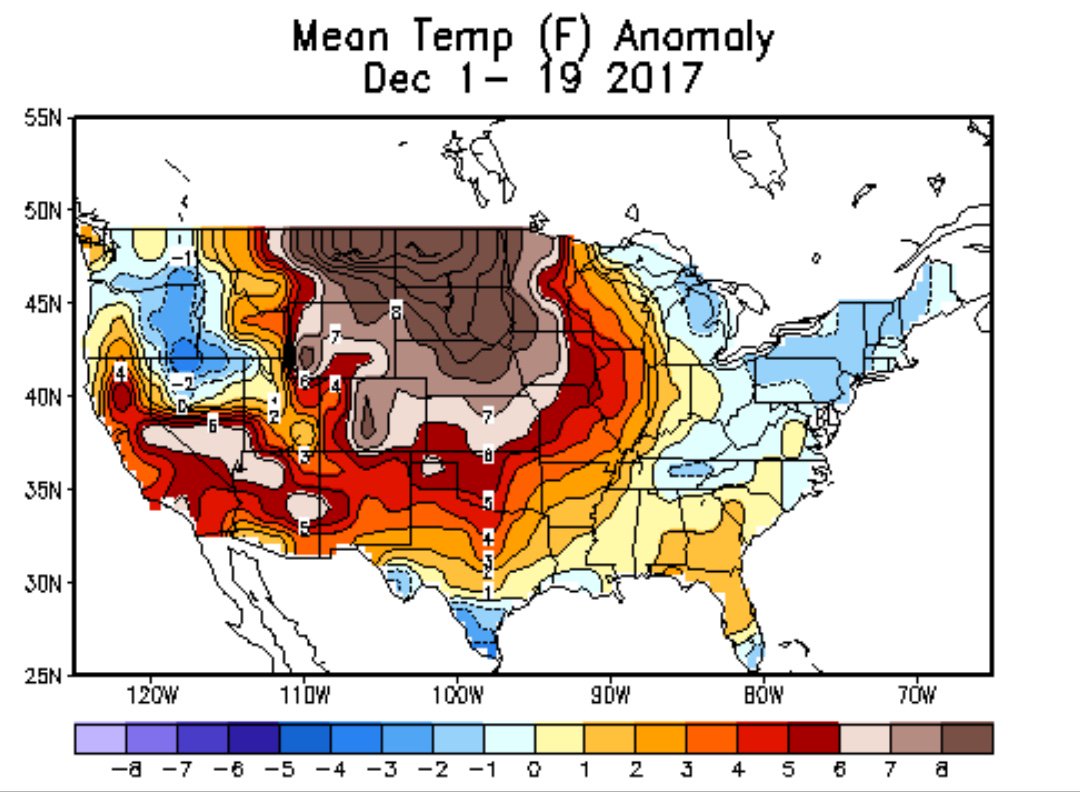 Well, yours truly bought into some chilly looking models for Christmas, as Bob pointed out. This pattern should produce only a few record lows on Christmas Day:

The Hudson Bay low is strong but did not dig as far south and west as both the European model ad GFS had forecast. What we should see is a near average temperature pattern across the U.S. instead of arctic chill except across the northern tier of states:

Oh well. I’m sure that there will be an arctic outbreak affecting the South before winter’s end…just not this Christmas.

I was listening to Trump’s tax “victory lap” speech this morning and was struck about the President’s and other Republican’s insistence on drilling in the ANWR region of Alaska, which is a vast crude oil reserve on Federal land. I’m definitely in Bill McKibben’s camp of leaving carbon in the ground, but from what I have seen of human nature, anything that can be mined or drilled fairly easily for profit won’t be left alone.

The Arctic National Wildlife Refuge (ANWR or Arctic Refuge) is a national wildlife refuge in northeastern Alaska, United States. It consists of 19,286,722 acres (78,050.59 km2) in the Alaska North Slope region. For those not familiar with ANWR, here is where it is located:

The drilling provision was seen as key to getting Sen. Lisa Murkowski, Alaska Republican, on board with the tax bill.

“Opening the 1002 Area and tax reform both stand on their own, but combining them into the same bill, and then successfully passing that bill, makes this a great day to be an Alaskan,” she said in a statement after the measures passed. “I thank all of the senators who spent time learning about our opportunities and needs, and who joined us tonight in voting for Alaska. We are grateful for their support and eager to take the next steps for this pro-jobs, pro-growth, and pro-energy legislation.”

Drilling in ANWR has become of the most high-profile fights in history between energy advocates and environmentalists. Those who favor oil drilling say only a small portion of the pristine area will be affected, and that exploration can be done safely; environmentalists maintain that opening any piece of ANWR to drilling sets a dangerous precedent, and they contend that an ecologically disastrous spill is inevitable.

Yes, the tax bill, which has passed Congress, will open more lands for drilling…tisk tisk. Any oil drilled from Area 1002 would have to be transported southward, which may lead to spills potentially harming wildlife. Development may also spoil pristine vistas, which were set aside as a refuge before any oil was found way back during the Carter Administration. Here is some more information from Reuters:

“Nobody knows how much oil the refuge contains, but the U.S. Geological Survey estimated in 1998 that the 1002 area held about 10.4 billion barrels of recoverable crude.

But a global oil glut that has kept domestic oil prices at levels below $60 a barrel may prevent wide success in ANWR. In a lease sale this month for land in Arctic Alaska, less than 1 percent of the 10.3 million acres (4.2 million hectares) received bids from oil companies.”

Now we will wait and see how many records will be set by the first major arctic outbreak of the season. I’m amazed at who few record low points the “cold team” have scored so far this December looking at the “record scoreboard:”

Note that the red colors are boldly highlighted for December 2017 on the chart. The data is bodly highlighted on the scoreboard if the ratio of DHMX to DLMN records are more than 10 to 1. Most of the 1292 record warm reports have come from the western U.S. this month.

After a multi-day break, Thurs/Fri will bring yet another stretch of critical fire weather conditions for the scorched hillsides near L.A. (RH dipping below 10%, winds gusting to 50mph+) http://www.spc.noaa.gov/products/fire_wx/fwdy2.html … #ThomasFire 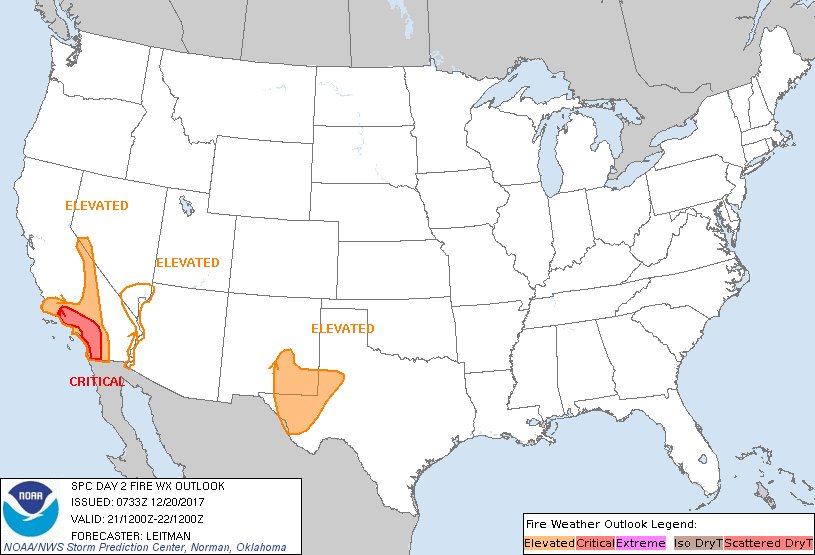 Hmm. That model based forecast of an arctic outbreak going southward to the Gulf Coast by Christmas by yours truly isn’t doing so well. Here are the latest 2 meter temperatures valid for the 26th:

I may add more pertinent information if it crosses my radar later today.