Friday March 9th… Dear Diary. The main purpose of this ongoing post will be to track United States extreme or record temperatures related to climate change. Any reports I see of ETs will be listed below the main topic of the day. I’ll refer to extreme temperatures as ETs (not extraterrestrials)😊. Here is today’s main climate change related topic:  (If you like these posts and my work please contribute via the PayPal widget, which has recently been added to this site. Thanks in advance for any support.)

The last couple of days I’ve come across some items that are so ridiculous that they nearly made me burst out laughing, but since people are gullible they really aren’t that funny. Let me share them in social media form.

First, of course, we have Trump officials trying to claim that their “expertise” is greater or better than some climate scientist’s wealth of knowledge:

A Trump appointee with no scientific background said USGS glacier experts were “going outside their wheelhouse” for accurately stating glaciers are dramatically shrinking due to climate change https://www.washingtonpost.com/news/energy-environment/wp/2018/03/07/trump-official-said-scientists-went-outside-their-wheelhouse-by-writing-climate-change-dramatically-shrunk-montana-glaciers/ … 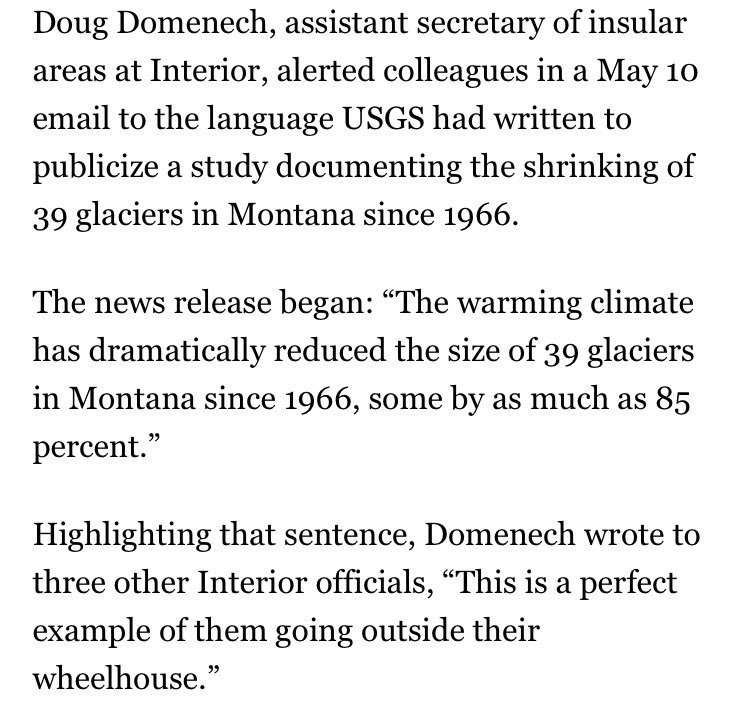 Are doctors “outside their wheelhouse” when they diagnosis an illness?!?

Scientists are the physicians of the planet. It’s running a low-grade fever, and we have the diagnosis:

It’s real, it’s us, and the impacts are becoming increasingly serious.

6:57 AM – 9 Mar 2018
Sometimes I think I have gone down the “Rabbit Hole” in Lewis Carroll’s Alice in Wonderland living in an alternative world of lies and deceit when it comes to the subject of climate change. Those who want to profit from what I will term “brown energy” have no shame in their efforts to dismiss the benefits of green energy, even going to the lengths of saying that some renewables are bad for the environment. Let’s go from the sublime to the ridiculous:

Holed up behind his $139k doors, Interior Secy Ryan Zinke has developed a theory that wind turbines are warming the planet.
https://www.ecowatch.com/ryan-zinke-wind-turbines-2544468642.html
Also from the Ecowatch article in association with our avian friends and this wind turbines:

Here’s a graph from Zinke’s own agency for measure. Note how oil pits kill far many more birds than turbines.

“Look those people in the eyes that are starving and tell them you can’t have electricity,” said Perry in remarks after his big speech to the oil and gas industry at the annual CERAWeek energy conference in Houston. “Because as a society we decided fossil fuels were bad. I think that is immoral.”

Speaking of social media it saddens me to know that my good friend Dr. Michael Mann has less followers than an up and coming  expert, Ryan Maue from the next generation of scientists. Don’t get me wrong, Ryan is a great innovator when it comes to improving short range meteorological model graphics, but we disagree on the severity of the climate change problem. I guess money talks when it comes to oil, coal, and gas:

Dr Michael E. Mann is one of the world’s premier climate scientists. But he has less twitter followers than @RyanMaue who according to Desmogblog is funded by Koch’s CATO. Retweet and follow Dr Mann to bring the universe back into its appropriate, just, benevolent balance.

Michael E. MannVerified account @MichaelEMann
Replying to @PeterWSinclair
Saudi Arabia, Russia & Wikileaks.
No, I’m talking about the fake scandal know as #climategate that was used in attempt to scuttle Copenhagen climate talks in 2009.
6:09 PM – 8 Mar 2018
I could go on and on here, but let’s stop. Anyway the old writing is on the wall for the lies swirling around brown energy. Money combined with innovation and not rhetoric should actually change things for the better:

“In the future, people will talk about energy in terms of kilowatts per hour instead of oil per barrels.”
https://www.bloomberg.com/news/articles/2018-03-08/the-battery-will-kill-fossil-fuels-it-s-only-a-matter-of-time

For the first week of March 2018 daily high maximum have been outpacing those of daily lows, but there have been relatively few reports. Canadian air flowing into the Northeast and South in the wake of Quinn was not of the record cold variety. I really don’t see a weather pattern in the next week leading to either much record warmth or chill across the lower 48 states, although true spring will be delayed in the East due to a highly amplified ridge/trough configuration: