Thursday March 29th… Dear Diary. The main purpose of this ongoing post will be to track United States extreme or record temperatures related to climate change. Any reports I see of ETs will be listed below the main topic of the day. I’ll refer to extreme or record temperatures as ETs (not extraterrestrials)😊. Here is today’s main climate change related topic:

Increasingly I and other climate scientists come across new tech solutions to the global warming problem, which have great intentions, but just aren’t great panaceas. In my book the best solutions are A) mitigation or turning to green energy and infrastructure including energy efficiency ASAP and in order to reduce the level of CO2 in the air B) planting trees: 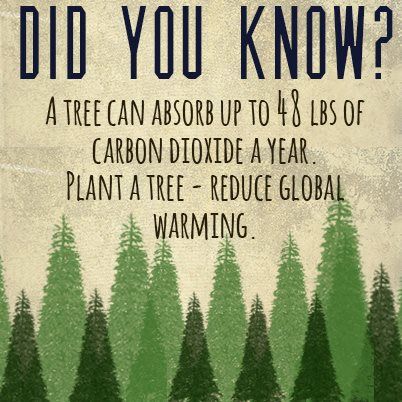 1:01 AM – 29 Mar 2018
I contend that a great partial solution would be the greening of rooftops, which is happening across many cities in order to “turn down” the global thermostat:  https://guyonclimate.com/2018/03/25/extreme-temperature-diary-march-25-2018-topic-the-global-thermostat-revisited/
Don’t get me wrong. All options should be on the table, and I’m not ready to be as dismissive as some of my colleagues, but any climate engineering scheme should not be an excuse for continuing to pollute or for delaying curtailment of carbon emissions.  So what is this week’s scheme? Putting salt in higher levels of the atmosphere:  https://www.livescience.com/62140-can-salt-stop-climate-change.html?utm_source=twitter&utm_medium=social

Quoting from the article: Sprinkling large amounts of salt into the atmosphere could stave off climate change, a group of researchers has proposed.

They’ve suggested that, because salt is highly reflective, it could potentially reflect sunlight back into outer space, helping to cool the Earth, they wrote in a report presented at the Lunar and Planetary Science Conference in Texas on March 21.

But other climate scientists aren’t so sure. This idea falls into the category of geoengineering — a deliberate, large-scale attempt to change the environment as a means to counteract climate change. [Top 10 Craziest Environmental Ideas]

Sprinkling large amounts of salt into the atmosphere could stave off climate change, a group of researchers has proposed.

They’ve suggested that, because salt is highly reflective, it could potentially reflect sunlight back into outer space, helping to cool the Earth, they wrote in a report presented at the Lunar and Planetary Science Conference in Texas on March 21.

But other climate scientists aren’t so sure. This idea falls into the category of geoengineering — a deliberate, large-scale attempt to change the environment as a means to counteract climate change. [Top 10 Craziest Environmental Ideas]

“It’s an interesting idea,” Michael Mann, a distinguished professor of meteorology at Penn State, told Live Science. But “most of these [geoengineering] schemes,though potentially appealing at the surface, are seen to be fraught with potential unintended consequences when you look at them in more detail.”
Essentially plain old table salt if ground into very small particles and released into the upper troposphere would not block infrared heat released from Earth and reflect some in coming solar radiation. My big questions are how much salt would be needed for such a scheme to be viable and how much energy would it take to get X amount of salt near the tropopause? I hope that the climate problem doesn’t eventually call for “desperate measures.”
Here is another geoengineering solution:

Question for everyone … What do think of my idea to remove C02 using Klaus Lackner’s material in car and home air filters? I understand this idea would be one of many actions needed to reverse climate change. Thank you – Rich #myccnotes#hope7cchttps://youtu.be/HBatnQZvN64 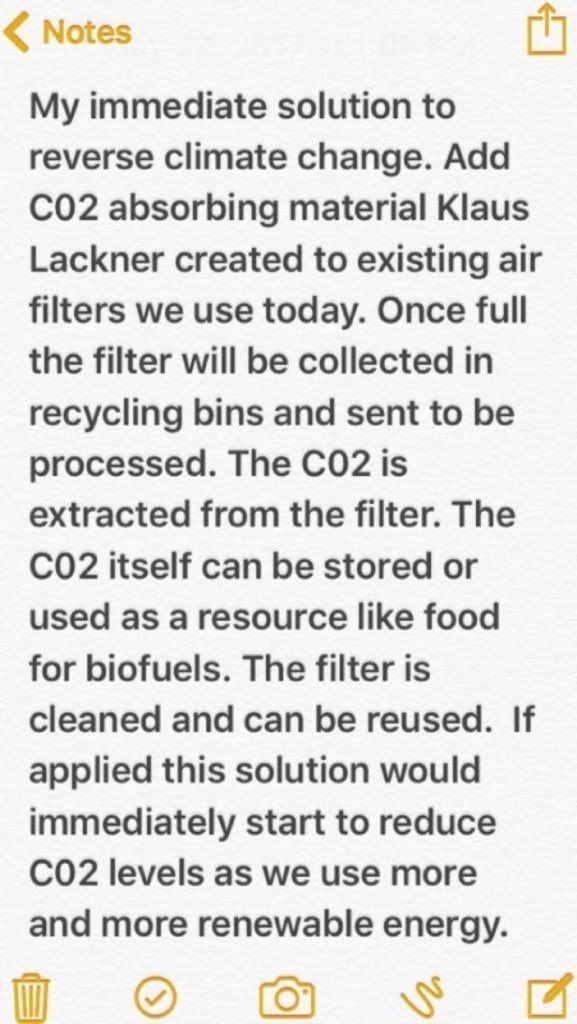 3:59 AM – 29 Mar 2018
Looking at this tweet I did a little research and found out that Klaus Lackner has been a proponent of geoengineering for a long time:
http://www.pbs.org/wgbh/nova/tech/lackner-carbon.html

Q: Capturing CO2 is an interesting idea, but plants and trees leave behind freshwater and oxygen instead of some undesirable waste product. Is there any research being done on mimicking the process of photosynthesis? Or perhaps in the genetic engineering of plants/trees, which have an accelerated photosynthesis cycle? C. Tam, Vancouver, British Columbia, Canada

Lackner: There is research in such fields, but it is worth pointing out that all the plants and trees in the world are not enough to absorb all the carbon that people have released and are expected to release over the next 100 years. The world has consumed 300 billion tons of carbon since the beginning of the industrial revolution and is consuming seven billion tons per year today. The entire biomass on Earth amounts to 600 billion tons. Forty years from now we would have to have doubled the standing biomass in order to absorb all the CO2that will have been emitted by then. I doubt that we can double the total biomass without severe ecological consequences. This is why carbon capture and storage is one important tool in our toolbox.

Well, let’s not throw “salt on the wound,” so to speak.😉 Nice try techies, but until we come across better solutions than my points A) and B) I won’t be recommending any engineering to turn down the global thermostat even though Mr. Lackner makes a fair point. Mr. Dabney agrees with me:

Paul Dawson @PaulEDawson
The problem with Geoengineering solutions to Climate Change is the unintended consequences, we haven’t been too good at spotting these ahead of time!
#ActOnClimate #ClimateChangehttps://futurism.com/our-attempts-reverse-climate-change-geoengineering-leave-planet-worse-off-when-started/…
7:12 AM – 28 Mar 2018
………………………………………………………………………………………….
It has been a quiet month in the extreme temperature department across the U.S., but not so in southern Asia. Pakistan just set a national high max for the month of March:

this 29 March 2018 is a new national monthly record high temperature for #Pakistan ! Highest temperature ever in March in the country.
Previous record : 45.0C on 28 March 1991, also at Chhor. 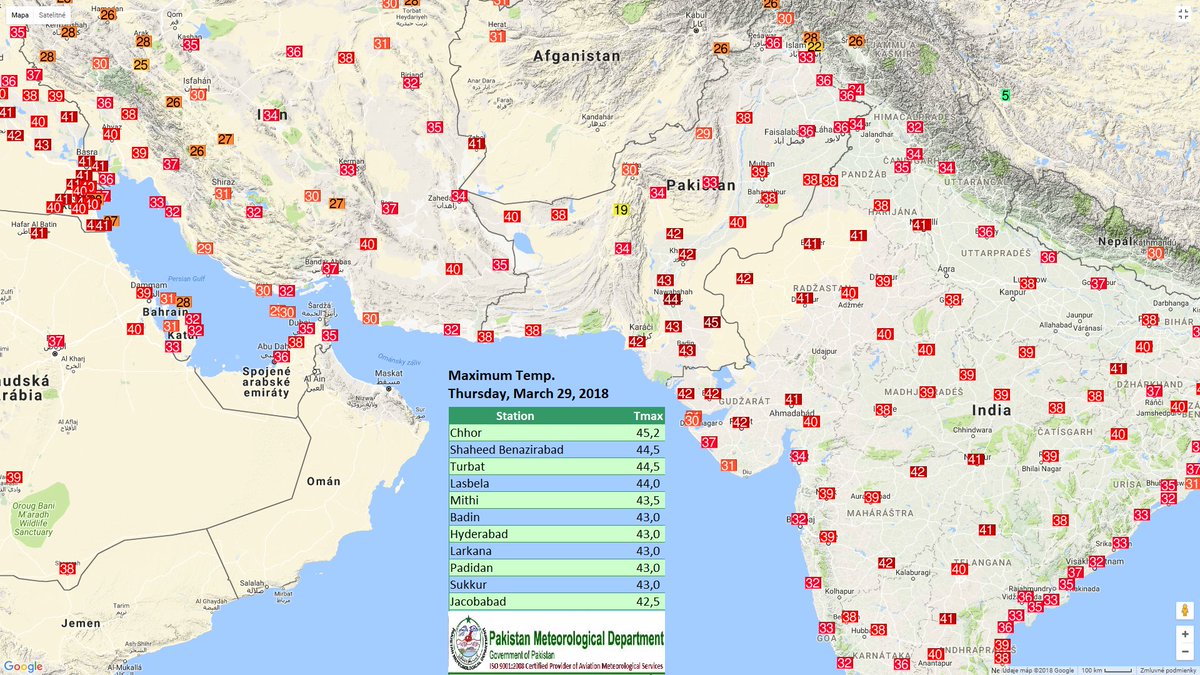 Zdenek Nejedly @ZdenekNejedly
Replying to @EKMeteo
11:04 AM – 29 Mar 2018
(If you like these posts and my work please contribute via the PayPal widget, which has recently been added to this site. Thanks in advance for any support.)
The Climate Guy