Friday April 6th… Dear Diary. The main purpose of this ongoing post will be to track United States extreme or record temperatures related to climate change. Any reports I see of ETs will be listed below the main topic of the day. I’ll refer to extreme or record temperatures as ETs (not extraterrestrials)😊. Here is today’s main climate change related topic:

March Roared Into a Chilly April

NCEI released their monthly U.S. climate assessment this morning indicating that March 2018 had near average temperatures for the United States as a whole, however the weather during that month was anything but normal. There were also three billion dollar damaging events during the first three months of 2018:

On prior March posts I noted that the four nor’easters had a climate change signal due to warm Atlantic sea surface temperatures. The lack of southern Rockies snow, southwestern drought, and warmth was in association with the dipole and could be due to climate charge. We know now that just about every weather event is influenced by carbon pollution, but it remains very difficult to link most such as the billion dollar disaster that occurred in the South. I do think that due to changes in the polar vortex weather in general is getting more volatile, thus the number of billion dollar natural disasters are increasing:

Temperature and record count wise March 2018 had aspects indicating that the month had conditions across the continental U.S. that was only slightly above average with the Southwest seeing most of the heat:

Since the start of a La Nina event in the fall of last year there has definitely been a cooling trend across the globe and in the United States. You can see this trend on my “record score board,” which has been updated through 4/5/18:

That 37 month streak of more daily record highs than lows was broken in January. March 2018 got ranked at a mediocre 76, or the 49th warmest March on record since 1895 for the CONUS. This month, relatively speaking  has started off about as anomalously cold as November 2014. We shall see if the trend continues as we go through the spring into the summer.

Here is an oddity that I just tweeted:

Question my #climate friends. In light of this cold start to #April, why are April and May the coolest months, relatively speaking, this decade for the U.S.? @MichaelEMann @BernadetteWoods @bhensonweather @Weather_West @AlaskaWx @Climatologist49 @ClimateOfGavin @capitalweather 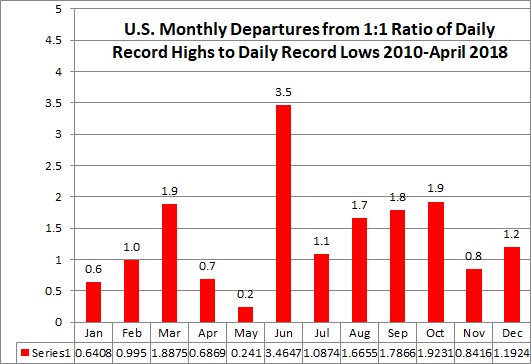 1:23 PM – 6 Apr 2018
I don’t think that “cool springs” are a coincidence this decade due to perhaps a “mini-climate episode” happening the last several years when the average temperature of the planet is around 1.2F above preindustrial conditions. At this temperature level perhaps the polar vortex is buckling more during spring than in winter ushering shots of cold air such as the current one over the Midwest. This mini-climate episode may disappear as the planet gets warmer. This is just a thought with no real science to back it up besides record counts and temperature averages. Perhaps investigating this hypothesis can aid researchers to better understand the more subtle aspects of climate change. Fraser McLeod brings up a good point:

Vortex is already established in winter and spring. Not established in fall. Early disintigration of the vortex affects spring temps more than temps at any other time of year. Causes Arctic outflow, cooler spring temps?
2:05 PM – 6 Apr 2018
Also:

I believe we are beginning to see a start of a longer term trend that will increasingly displace polar air masses as the latent ocean heat takes hold of the Arctic Ocean and as Greenland melt impacts traditional ocean/atmosphere heat exchange in the North Atlantic.
2:10 PM – 6 Apr 2018 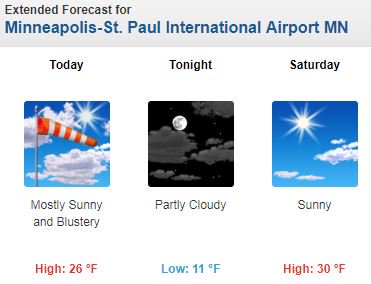