Thursday April 5th… Dear Diary. The main purpose of this ongoing post will be to track United States extreme or record temperatures related to climate change. Any reports I see of ETs will be listed below the main topic of the day. I’ll refer to extreme or record temperatures as ETs (not extraterrestrials)😊. Here is today’s main climate change related topic:

By now my met friends are aware of an “atmospheric river” set to pummel Central California and points northward tomorrow. Bob Henson of Weather Underground does a good job with the particulars in association with this system:

Also, an uncommonly cold pattern has persisted from late March into early April across much of the Midwest and Northeast. Get an eyeful of theses record low maximums expected tomorrow:

Some ridiculous cold for early April about to invade Upper Midwest. Projected high in Minneapolis Friday of 21 would be coldest in recorded history during April. More info: https://wapo.st/2q8rMhJ  h/t @RyanMaue 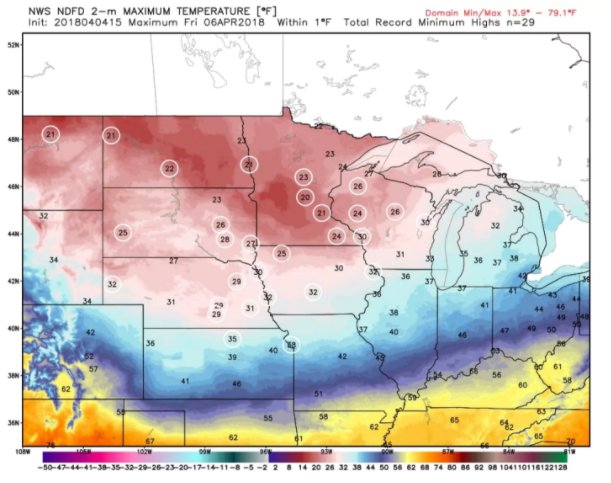 If I didn’t know any better, I’d say that global warming was over…but I know better.😉  So what’s up with the weather?

First let’s put the cold weather into context looking at the Northern Hemisphere as a whole the next five days:

Hmm. The deepest blue cold anomalies reside from south-central Canada into the northern Plains. Just about everywhere else it’s warm. Notice something else? A big warm anomaly centered over the North Pole. Arctic warmth has been quite apparent from winter into late spring, which I contend has been affecting the jet…a signature of climate change. Let’s look at a Penn State model ensemble anomaly chart to see if it looks typical for April:

As a meteorologist the first thing that looks odd is how highly amplified the pattern looks for early April. There is a big warm red anomaly near the pole with a parade of three blue cold pockets, which are in association with strong storm systems across the northern and central Pacific. The red pocket is forcing the jet ad those three storms further south.Note one poised to move into the West taping that atmospheric river. The biggest cold pocket has set up south of Greenland and stretches southwest into the northern Plains. This pocket has and will be responsible for record cold in the Midwest. The whole look of this hemispheric chart is that of a polar vortex punctured with warm holes forcing the jet south.

Around and over the U.S. the 500 millibar pattern looks like that of a typical February, so it’s no wonder that we see weather resembling that of winter at the surface:

On the forecast surface chart we see that atmospheric river coming into California while a 1040 millibar arctic high moves into the northern Plains tomorrow. Quoting Daniel Swain: