Monday April 16th… Dear Diary. The main purpose of this ongoing post will be to track United States extreme or record temperatures related to climate change. Any reports I see of ETs will be listed below the main topic of the day. I’ll refer to extreme or record temperatures as ETs (not extraterrestrials)😊. Here is today’s main climate change related topic:

Happy tax day everyone. Speaking of filing stuff NASA has processed temperature data from around the planet for March 2018 indicating that last month was the 4th warmest March on record since measurements began being taken in 1980. The warming trend on this graph is pretty stark: 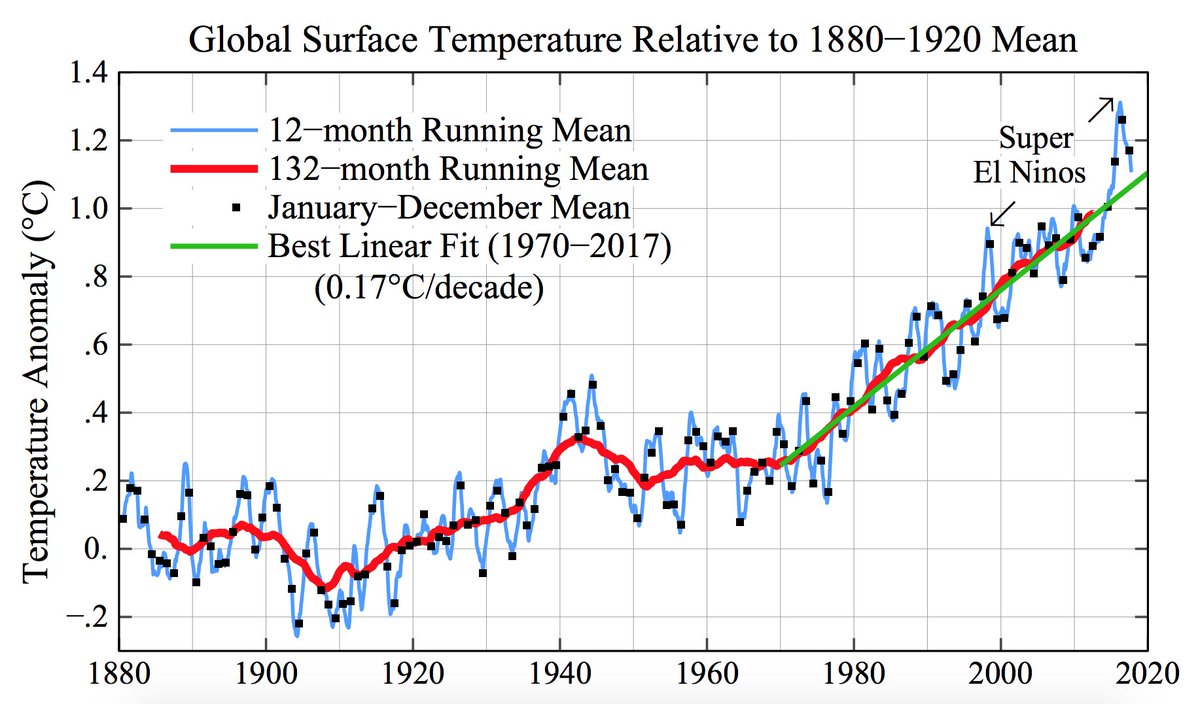 The planet, however, has cooled down just a smidgeon since the super EL Nino of 2016 perhaps allowing one huge cold pocket to develop right over North America, fooling some people into believing that global warming isn’t occurring, or at the very least letting some to the conclusion that existential threat of climate change isn’t  a big deal. A wry look crosses my face every time cold weather affects the media. It’s disgusting that when it is cold in the U.S. the media drops climate change coverage but when it is hot the issue gets put back on the front burner (pun intended).

Here we see the cold pocket this time around:

Where’s Spring you ask? Nearly everywhere except much of North America. Here’s the difference from normal across the globe for April 1-14 this year. 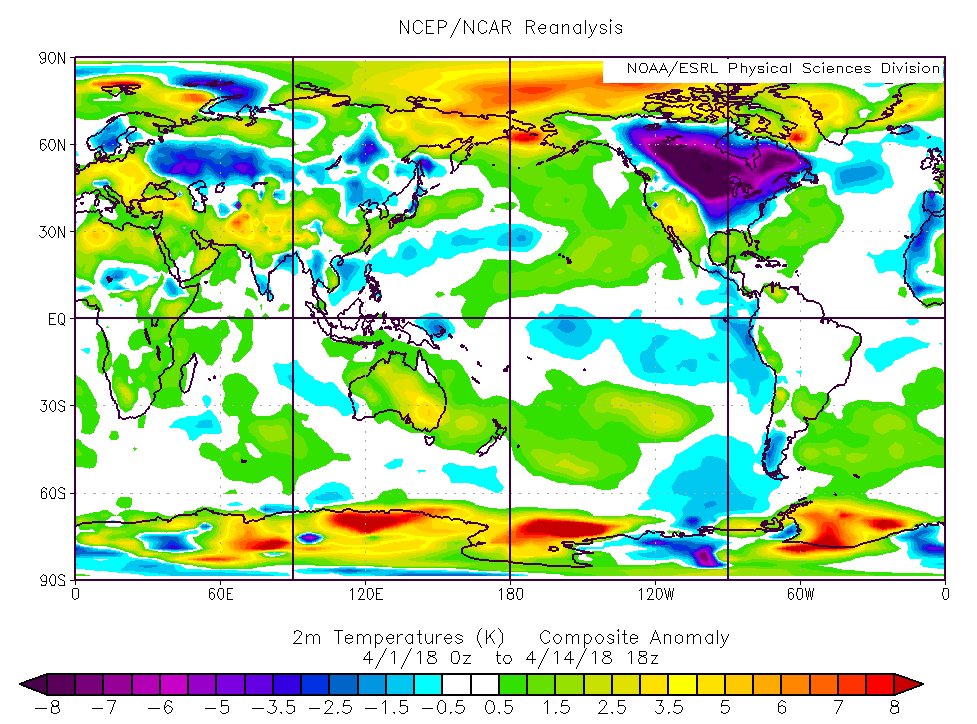 The first half of April was the coldest on record in Minneapolis and 4th-coldest in Chicago. 260.1 GWHDDs is the 8th-highest total since 1950. Not cold everywhere though–4th-warmest on record in Phoenix and Miami, 3rd warmest San Diego and Las Vegas 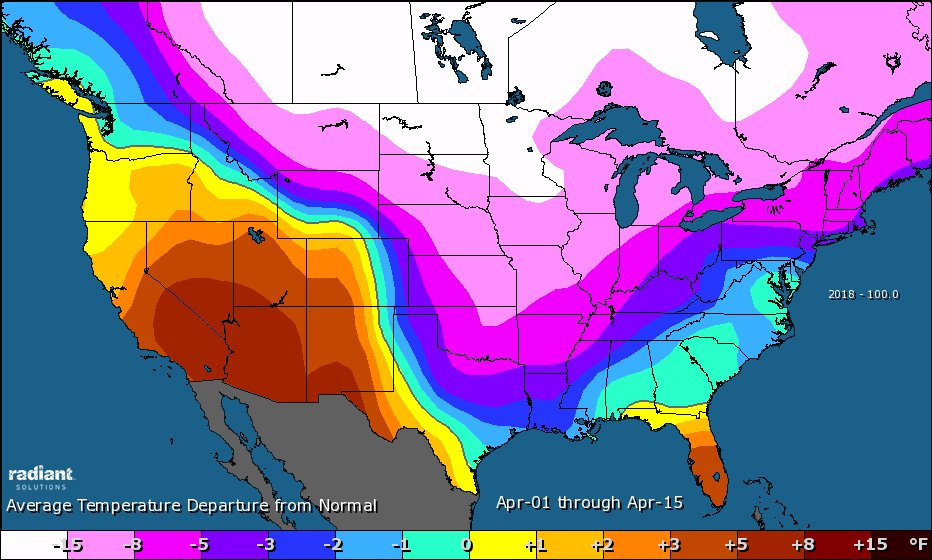 7:43 AM – 16 Apr 2018
Snow really puts a damper on talk of global warming, even though heavy snow is a sign of heavy precipitation, which is a climate change signal:

Here is a look at the snow totals from the HISTORIC winter storm from late April 13 to early April 16. #wiwx #whereisSpring 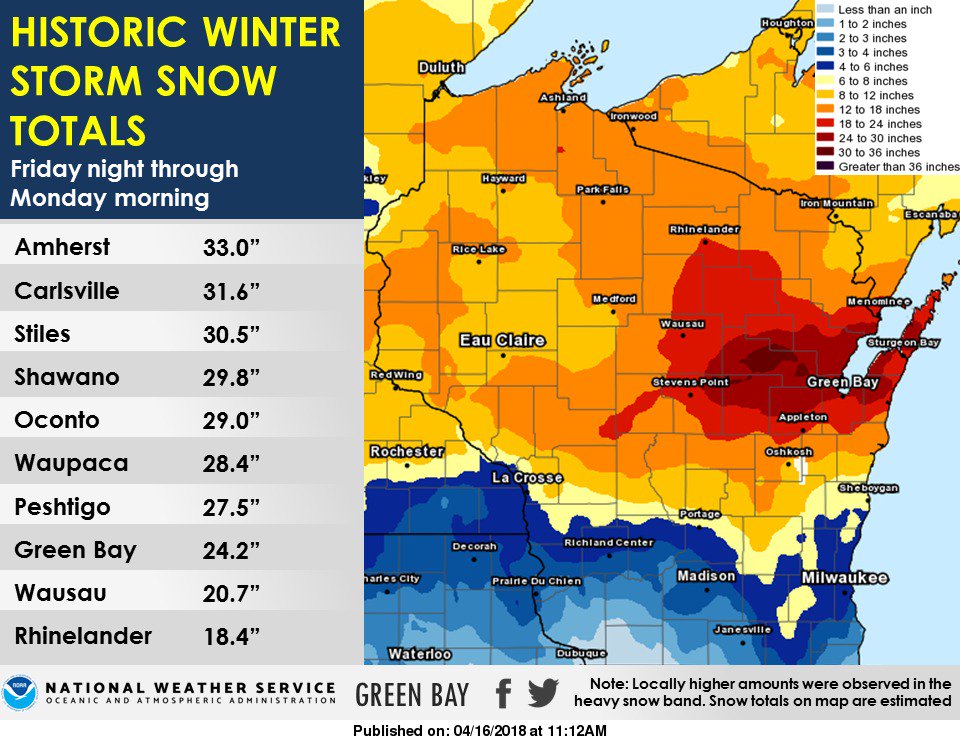 9:12 AM – 16 Apr 2018
One problem most on air meteorologists are faced with that I haven’t expounded on is simply the lack of time to explain climate change. It would take a lot of time to delve into some nuances of a warming atmosphere, which ironically might be possible for Xanto, as named by The Weather Channel. I tried a few days before the storm here: https://guyonclimate.com/2018/04/07/extreme-temperature-diary-april-7-2018-topic-climate-change-and-a-spring-storm/
To make a long story short, or as about as short as an OCM can talk in a few sentences while showing one graphic, Xanto got pinched off from the jet stream becoming stronger as it turned into a closed low because it got trapped underneath warm air aloft to the systems north. (And by the way also, many would argue that there would be way too little proof to associate any facet of Xanto with carbon pollution). I would add that heavy snow around Green Bay might be a signal, but I admit one would be hard pressed to make that argument. Not many people know what most  graphics on the below 500 millibar chart represent. For that matter, most probably don’t know what the term 500 millibars represents. (Here’s my primer from this site:               )  The dry, firey side of Xanto in the Southwest, obviously, would be easier to link but again would take time on air. One could also say that the number of snowstorms have been decreasing with time in a given area, and that springs are arriving earlier taking yet more time. Explaining climate change can get complicated when trying to link cold, stormy events, perhaps a big percentage why there is so much denial.

(On the chart Xanto is a closed low milling eastward through the Midwest early Monday morning.)
In conclusion, there will probably be enough cold air in the atmosphere to produce early and late season snow in the lower48 states for at least another decade. The world may only have one decade to uniformly deal with AGW. Ugh.