Wednesday April 18th… Dear Diary. The main purpose of this ongoing post will be to track United States extreme or record temperatures related to climate change. Any reports I see of ETs will be listed below the main topic of the day. I’ll refer to extreme or record temperatures as ETs (not extraterrestrials)😊. Here is today’s main climate change related topic:

In this life it’s essential that in order for a problem to get resolved responsible parties need to be held accountable. If little Susie is crying her parents want to know why so that there is no danger for their little girl. If their little Johnny has been making Susie cry by pulling her hair, well, Johnny is probably going to get a good spanking. Will that spanking change Johnny’s behavior? Perhaps. At the very least the spanking is an early life lesson for Johnny about crime and punishment.

In the adult world we know that some people and organizations will continue bad behavior until getting caught, singled out, and then punished financially for crimes. Punishment can and most often takes the form of fines and in the corporate world loss of profits via getting a bad reputation. “Brown energy” companies, even though doing a lot of good by helping to fuel the Industrial Revolution, are squirming coming up with a lot of excuses for their misbehavior, denying that there is a climate problem simply to avoid financial punishment whether it takes the form of a carbon tax, leaving money in the ground, or going to the expense of investing in green energy. Did you know that there are only about 90 companies worldwide that deserve to get spanked? Here is a list from 2016: http://www.sciencemag.org/news/2016/08/just-90-companies-are-blame-most-climate-change-carbon-accountant-says

Last month, geographer Richard Heede received a subpoena from Representative Lamar Smith (R-TX), chairman of the House of Representatives Committee on Science, Space, and Technology. Smith, a climate change doubter, became concerned when the attorneys general of several states launched investigations into whether ExxonMobil had committed fraud by sowing doubts about climate change even as its own scientists knew it was taking place. The congressman suspected a conspiracy between the attorneys general and environmental advocates, and he wanted to see all the communications among them. Predictably, his targets included advocacy organizations such as Greenpeace, 350.org, and the Union of Concerned Scientists. They also included Heede, who works on his own aboard a rented houseboat on San Francisco Bay in California.

Heede is less well known than his fellow recipients, but his work is no less threatening to the fossil fuel industry. Heede (pronounced “Heedie”) has compiled a massive database quantifying who has been responsible for taking carbon out of the ground and putting it into the atmosphere. Working alone, with uncertain funding, he spent years piecing together the annual production of every major fossil fuel company since the Industrial Revolution and converting it to carbon emissions.

The results showed that nearly two-thirds of the major industrial greenhouse gas emissions (from fossil fuel use, methane leaks, and cement manufacture) originated in just 90 companies around the world, which either emitted the carbon themselves or supplied carbon ultimately released by consumers and industry. As Heede told The Guardian newspaper, you could take all the decision-makers and CEOs of these companies and fit them on a couple Greyhound buses.

Heede’s carbon accounting is already opening a new chapter in climate change litigation and policy, helping equip plaintiffs who believe they have suffered damages from climate change to claim compensation. “Rick’s work really helps connect the dots,” says Marco Simons, general counsel of EarthRights International, a Washington, D.C.-based legal group that defends the rights of the poor. “He hasn’t sought out the spotlight, but I think his work is tremendously important.”

I invite all to read the rest of the article, which includes a fascinating carbon counter animation. So what is happening to that carbon? Here is a nice chart in association with carbon sinks:

The cumulative carbon budget from 1870: 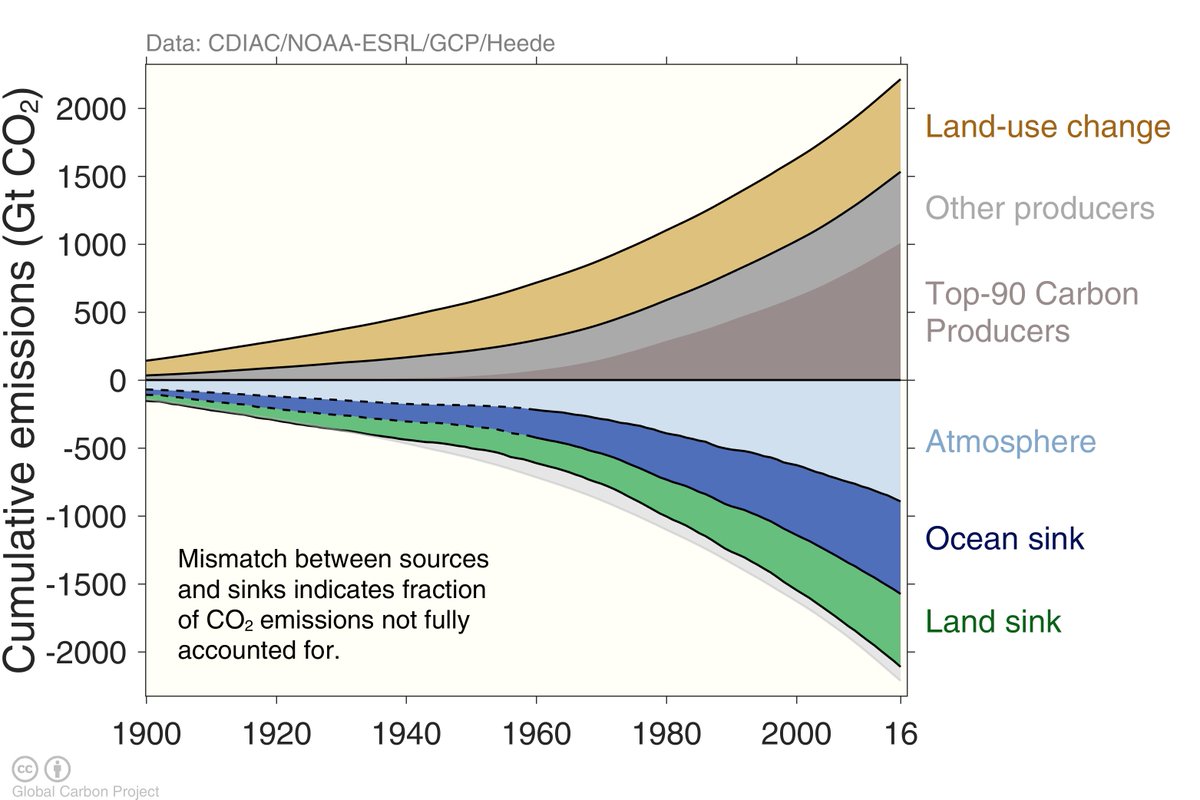 12:03 AM – 18 Apr 2018
Next, what would be the appropriate punishment for these 90 companies? Just enough so that they turn away from the production, marketing and selling of brown energy, or something much more drastic like Nuremburg trial nooses? Here I would like all to think about the plight of Johnny. Should Johnny change his hair pulling behavior growing to love his sister, he is probably taking a big step to become a good young man. In the case of energy companies we should treat them like Johnny spanking  him with fines. However, If Johnny continues to be a bad seed after becoming an adult, well, Arnold Schwarzenegger has the right idea:
https://www.washingtonexaminer.com/policy/energy/arnold-schwarzenegger-will-sue-oil-companies-for-first-degree-murder
As we go down the road this century the punishment for polluting carbon will become more severe fitting the crime. Since relatively few people are being killed and displaced, so far, courts are just in the beginning phases of seeing how gruesome the known crime of carbon pollution is. I’d advise companies to switch to producing energy just to protect their very existence. Otherwise, guess who will be back.
……………………………………………………………………………
In other news today March 2018 was the 5th warmest March since records began being kept by NOAA in 1880.
For a thorough post on this news see: https://www.wunderground.com/cat6/march-2018-earths-5th-warmest-march-record
I might add some relevant ET information later today.
(If you like these posts and my work please contribute via the PayPal widget, which has recently been added to this site. Thanks in advance for any support.)