Thursday April 19th… Dear Diary. The main purpose of this ongoing post will be to track United States extreme or record temperatures related to climate change. Any reports I see of ETs will be listed below the main topic of the day. I’ll refer to extreme or record temperatures as ETs (not extraterrestrials)😊. Here is today’s main climate change related topic:

Most of my posts are somewhat dour given the state of climate change and politics swirling around the subject. There’s just not that much good news coming out of the U.S. due to the Trump Administration with an EPA under siege by Scott Pruett and a new emphasis to prop up fossil fuels. Well, today I can continue to report that the cost of solar is coming down, which hopefully will put coal for electricity generation out of business in a few years, some good news for a change. Climate Central has come up with an article and graphic indicating the decline:

Job growth in solar is soaring, with more than 370,000 Americans working in the solar energy industry, an increase of 300 percent since 2012. Correspondingly, the total amount of solar generated in the U.S. has skyrocketed over the last decade from 1.1 gigawatts in 2007 to 47.1  gigawatts last year.

Solar energy is powering key facilities in communities across the U.S.  Local K-12 schools are embracing solar for its cost benefits as well as its educational aspects. More than 5,400 schools have installed solar in the U.S., with a cumulative capacity of more than 900 megawatts. Houses of worship are increasingly welcoming solar. According to Interfaith Power and Light, solar has been installed in houses of worship from Texas to Minnesota, and from Maine to California. Solar energy is also becoming more widespread in sports stadiums, with five of the top 10 solar-powered sports venues in the world located in the U.S. The Indianapolis Motor Speedway leads the way with more than 39,000 panels capable of generating 9000 kilowatts of power. The top ranked NFL stadium is the home of the Super Bowl champion Philadelphia Eagles — Lincoln Financial Field — with 11,000 panels generating 3,000 kilowatts.

More solar farms are being built every year. Here is one that came on line yesterday with this headline:

To make matters even better researchers have recently discovered a new process for manufacturing material that should make the solar cell very cheap with this headline:

Professor Marin Alexe from the University of Warwick said:

“Extending the range of materials that can benefit from the bulk photovoltaic effect has several advantages: it is not necessary to form any kind of junction; any semiconductor with better light absorption can be selected for solar cells, and finally, the ultimate thermodynamic limit of the power conversion efficiency, so-called Shockley-Queisser Limit, can be overcome. There are engineering challenges but it should be possible to create solar cells where a field of simple glass based tips (a hundred million per cm2) could be held in tension to sufficiently de-form each semiconductor crystal. If such future engineering could add even a single percentage point of efficiency it would be of immense commercial value to solar cell manufacturers and power suppliers.”

The only downside to this good news is that some power companies will continue to do dirty work to delay or prevent the solar revolution, particularly when it comes to micro grids. Power companies could become passé if enough electricity could be generated for each individual factory, building or house to meet any needs within a relative small community:

Who would want to rely on a middleman if cheaper energy can be generated at the street or village level? Every person owning an edifice within a micro grid community would be responsible for their own power, a libertarian view, which some would definitely be seen as an improvement upon relying on a “central” power source by many people. It’s no wonder that power companies are scared stiff of solar given the billions of $ at stake.

In the old ET or extreme temperature department the “cold team” has been racking up the points mainly in the Midwest this month:

Brrrr… 2/3rds way through April and just about everywhere in Northern Plains on pace for coldest April ever recorded! 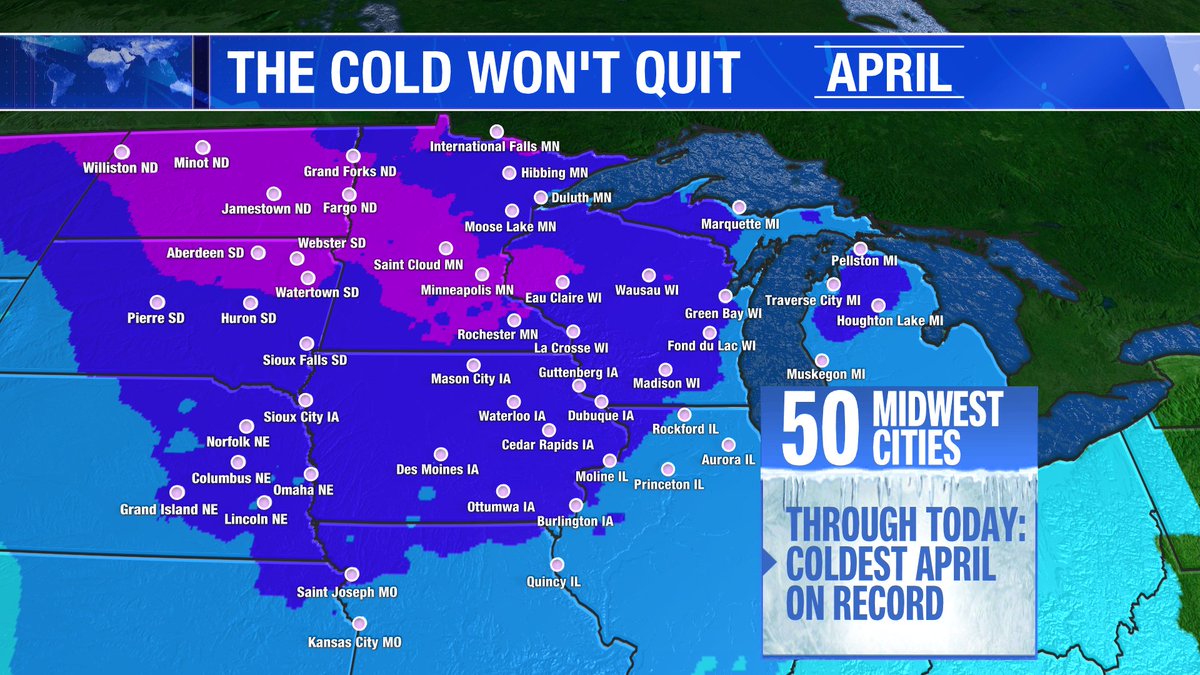