Monday  May 21st… Dear Diary. The main purpose of this ongoing post will be to track United States extreme or record temperatures related to climate change. Any reports I see of ETs will be listed below the main topic of the day. I’ll refer to extreme or record temperatures as ETs (not extraterrestrials)😊. Here is today’s main climate change related topic:

Whiplash…From Cold to Hot and Wet

Unusual and what I suspect climate change phenomena have been occurring across the United States the last couple of months. Extreme conditions running the gambit from record cold to record heat have been occurring across the Midwest from April into May. Record rainfall has been falling in the eastern U.S. One could chalk up some of the phenomena to extreme weather, but what we have seen the last two month is on the edge of typical climatology. Here are some items that I have seen pertaining to what I will term “climate change whiplash.” I do emphasize this point: A region will undergo true climate change when its weather more often than not is out of bounds with what is typically expected for a season.

First, it’s gotten very warm this May from coast to coast: 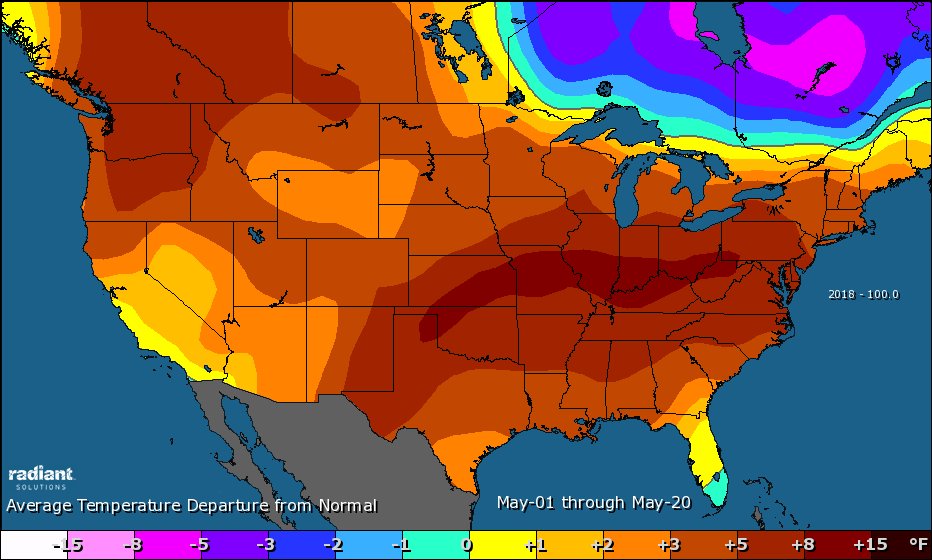 Note the co-location of the excessive temperatures in the Central/Southern Plains over/adjacent to drought areas. Local feedbacks are beginning which will perpetuate and intensify #drought in the region. #okwx#txwx#kswx@GPGrazing 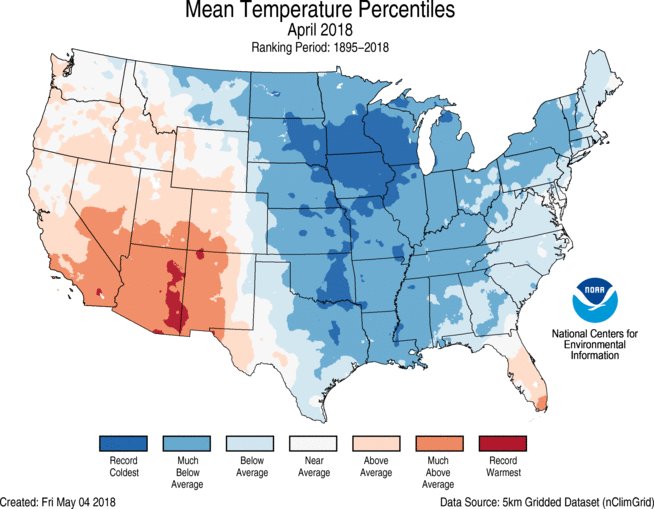 NWS WichitaVerified account @NWSWichita
After one of the coldest Aprils on record, it’s turning out to be one of the warmest Mays on record across the region, with month-to-date average temperature anomalies around 10 degrees warmer than normal. #kswx
4:49 AM – 21 May 2018 from Oklahoma City, OK
We can see the effect of going from a very cold weather regime for April to a hot regime for May looking at record temperature counts on my “record scoreboard.”For this data set all monthly ratios of  > 10 to 1 DHMX to DLMN or > 10 to 1 DLMN to DHMX are in bold type. The rankings are for the lower 48 states with the warmest ranking since 1895 of average temperatures being 124 and 1 being the coldest as of 2018.  Blue colors represent cold months and red warm. Those months with counts close to a 1 to 1 ratio of highs to lows are colored black.

With a ranking of 13 April 2018 was relatively the coldest month since November 2014. Note that as of this post, May 21st, we see another catalogued bold month, May 2018, with a ratio of DHMX to DLMN records above 10 to 1….whiplash indeed. I could make the argument that unless global temperatures decrease drastically any cold pockets or cold weather that does develop will be replaced by an above average temperature regime in a fairly short timespan, and this indeed has happened over portions of the U.S. this spring.
Another dipole has developed such that there has been a nearly continuous flux of moisture moving up the Atlantic Seaboard this month. As we know one signature of
climate change is heavy precipitation.  These statistics are raising a few eyebrows:

It has been a very wet last 10 days across most of the Eastern US, especially the mid Atlantic and southern Appalachian regions. 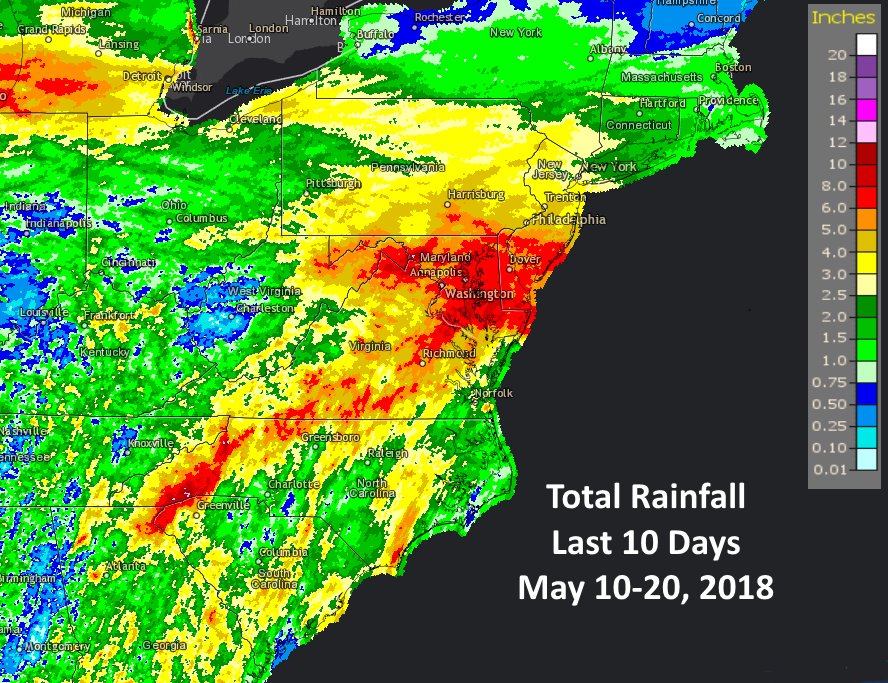 Total rainfall rankings for the week of May 12-18, from South Florida, Carolinas to the Mid-Atlantic.  This graphic from the Southeast Regional Climate Center, shows it was the wettest on record for numerous sites from Key West to Maryland, with many other sites in their top 10! 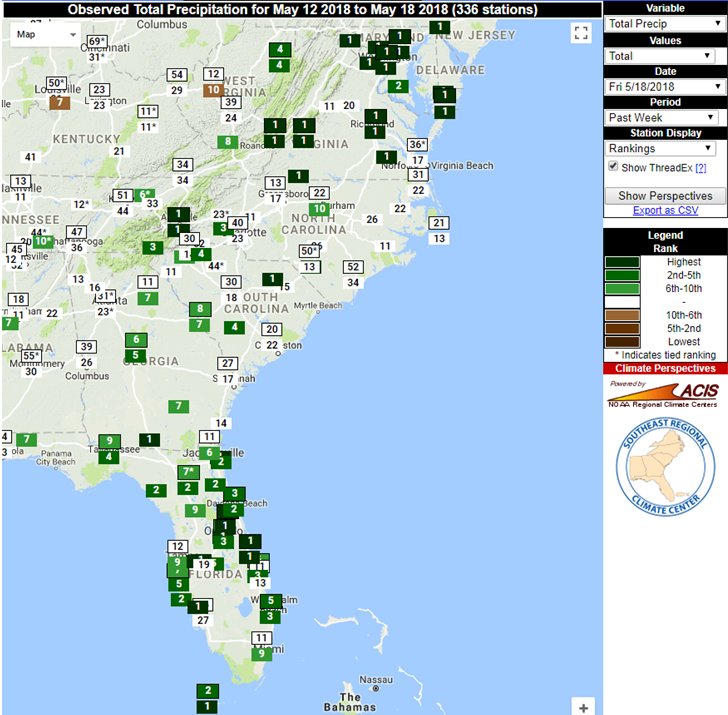 #Asheville has recorded their wettest May on record already (9.67 inches) with  still 11 days to go.. They are only 4.08 inches from matching the wettest month all time back in August 1940 with 13.75 inches. http://www.sercc.com/perspectives?station=avlthr … #CLIMPER #avlwx @NCSCO @NWSGSP @NOAANCEIclimate 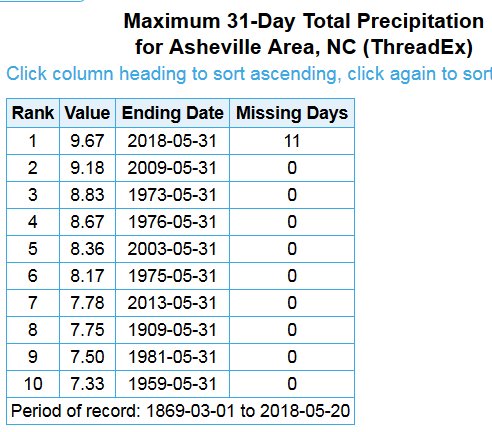 8:09 AM – 21 May 2018
The rest of this month we will see yet more warmth except across portions of the Gulf which might be affected by a tropical entity. I’ll post information about that tomorrow.

Today was the 9th day in a row of sub-100 degree high temperatures for #Phoenix! Enjoy the 90s for a few more days because excessive triple-digit heat will return later this week for the foreseeable future. #AZWX 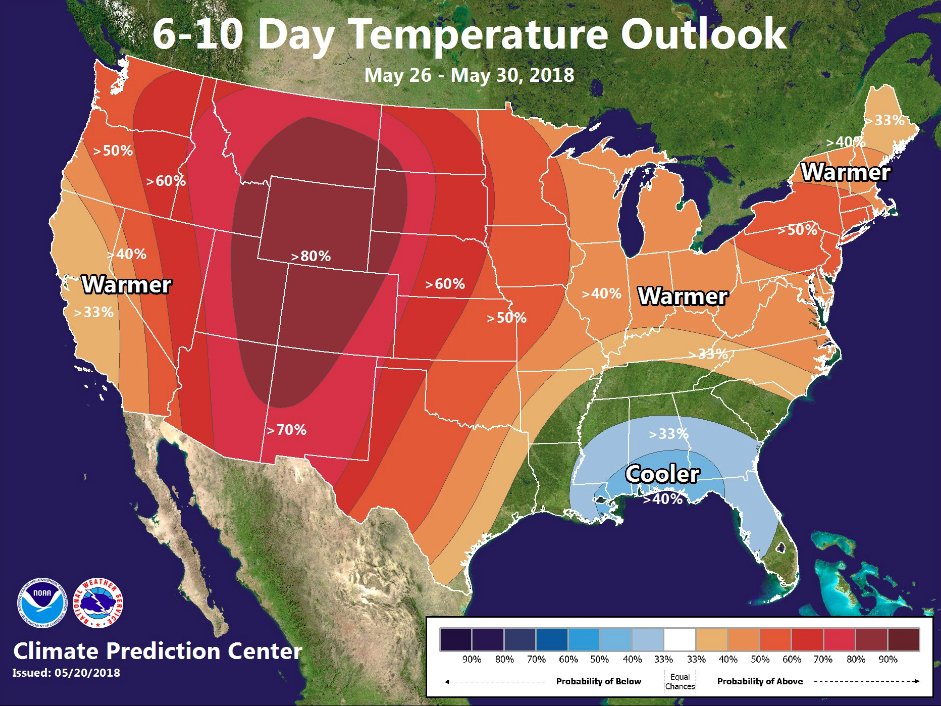 9:22 PM – 20 May 2018
The last few years, and for a relatively short, recent time, more and more climate scientists are coming on board with the notion that extreme weather can at least partially be attributed to climate change. The last two months in the United States have plenty of fodder for folks to point to and hash  out.
Another strange or rare occurrence is the lack of tornadic activity during what is typically a peak in May. I’ll chalk this up to  an abundance of warm air aloft over the CONUS slowing the jet stream:

Wow! Pretty impressive for the week before Memorial Day to have nothing more than marginal risks of severe weather (or the equivalent) for the entire Day 1-8 period. http://www.spc.noaa.gov/products/outlook/ … 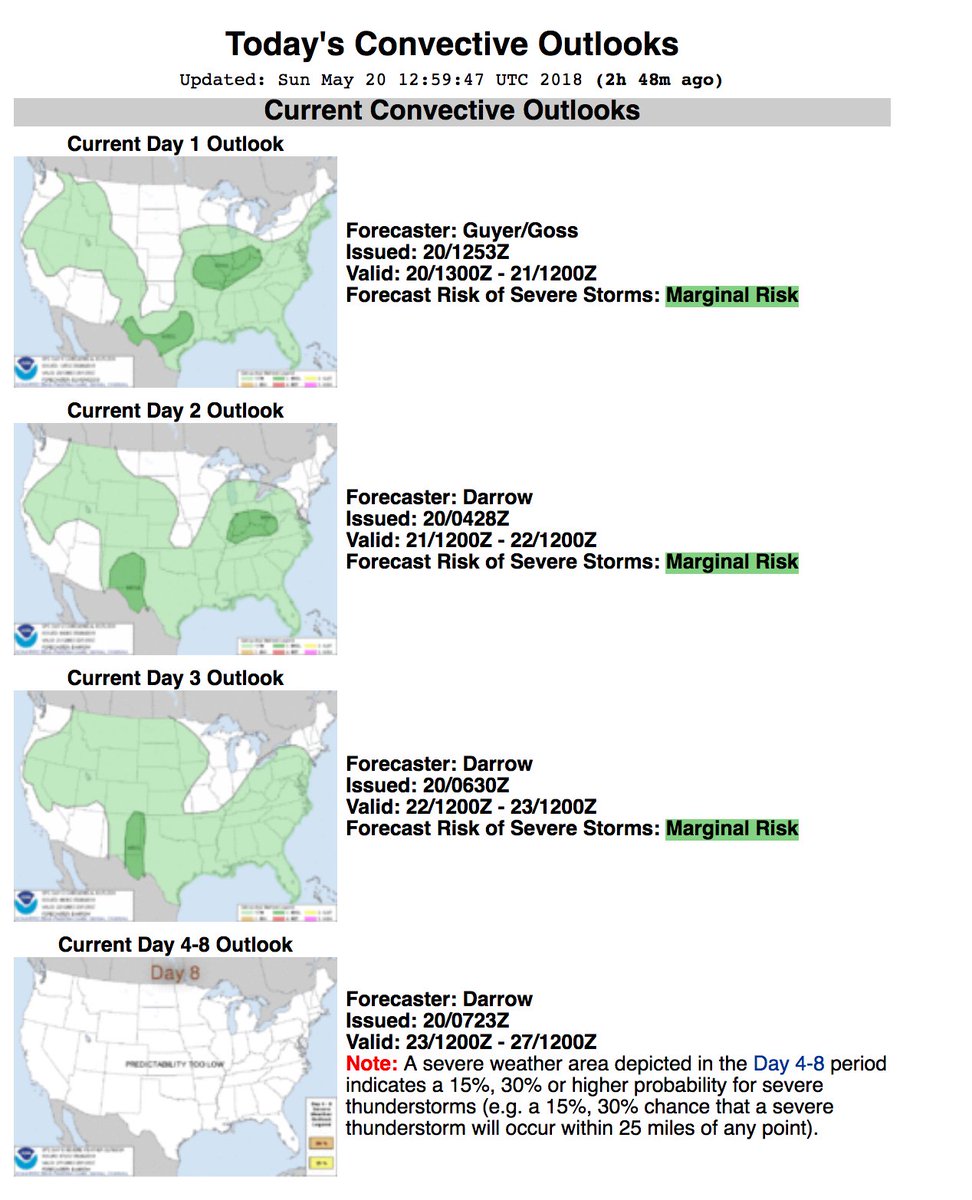 During the summer typically the number of tornadic storms goes down. We appear to be having summer in May.
On a positive note the first heat wave of this season ended late last week.  These forecast highs are below dangerous levels from coast to coast:

I may add more relevant material to this post later today.