We don’t care! There is too much money to be made by leaving this stuff in the ground. So what if the rest of the world thinks oil and coal are pure poison for the environment. You nations are real pushovers and marks, kowtowing to socialistic, green wimps. God gave us good, clean coal to start the Industrial Revolution. If oil weren’t in the ground in the first place we would still be traveling by horse. We don’t need to change. Just drill baby drill!

These are perhaps some of the thoughts going through Trump’s vacuous head as he refused to meet with the rest if the G7 leaders in Canada over the weekend on their meeting about climate change mitigation. Inside Climate News has a good article on the administration’s isolationist policy:

Here are a few quotes from the article:

“Trump skipped the G7’s formal discussions on the global warming crisis. And in the summit’s communique, the United States refused to join in common statements by the other six nations reaffirming their commitment to the Paris climate agreement, which he wants to abandon. Instead, the U.S. unilaterally promoted fossil fuels. And in the end, Trump renounced the whole communique in a Twitter tirade.”

“Canada, France, Germany, Italy, Japan the UK and the European Union reaffirm their strong commitment to implement the Paris Agreement, through ambitious climate action; in particular through reducing emissions while stimulating innovation, enhancing adaptive capacity, strengthening and financing resilience and reducing vulnerability; as well as ensuring a just transition, including increasing efforts to mobilize climate finance from a wide variety of sources,” the communique states.

The communique says they also focused on, among other things:

U.S. negotiators wrote their own paragraph for the climate section that focused on promoting the burning of fossil fuels:

“The United States will endeavor to work closely with other countries to help them access and use fossil fuels more cleanly and efficiently,” it said. “The United States believes in the key role of energy transitions through the development of market-based clean energy technologies and the importance of technology collaboration and innovation to continue advancing economic growth and protect the environment as part of sustainable, resilient and clean energy systems.”

The Trump regime is in their statement after the G7 conference trying to divide the environmental movement driving the transition to renewable energy. They clearly deny AGW in the statement, but appeal to those who want cleaner air & may not comprehend AGW. Very devious.

Noted scientists have commented on what steps other leaders besides Trump in the United States are doing for the climate:

“President Trump’s wrecking ball approach to international diplomacy left him utterly isolated at the G7 summit,” wrote Alden Meyer, director of strategy and policy at the Union of Concerned Scientists.

“Leaders from the other six countries didn’t even try to paper over their strong disagreements with Trump on trade, climate change and other important issues,” Meyer wrote. “They are joined by thousands of mayors, governors, business leaders and others who are moving forward with ambitious climate action and pursuing the tremendous economic development and job creation benefits that clean energy technologies provide. As communities across the U.S. confront the costly and harmful impacts of climate change, it’s these leaders—not President Trump—who are acting in the true economic, environmental and national security interests of the American people.”

The events over the weekend in Canada and quotes from the Inside Climate News article lead me to believe that Trump is isolated and passé on the environment. Led by young adults and others protesting climate polluters this summer, and because of other issues, there should be enough political outcry to flip the House this fall. Should the House fall to the Democrats Trump and his brown energy cronies will be held in check in 2019. November 2018 is still months away and gerrymandering is rampant throughout  the  U.S., so I won’t be shocked if Republicans retain control of the House, but I’ll be unpleasantly surprised. Once corruption and abuse of power gets uncovered in 2019 by Congress our system of government may finally oust Trump via the 2020 election or even impeachment. This is not to write that brown energy interests won’t try to politically worm their way into energy policy once Trump is long gone during the 2020s, though. Anyway all, take heart, continue to protest peacefully, and be patient.

In other news Canada after hosting a contentious, hot G7 is literally heating up:

Very hot day on the SW shore of Hudson Bay today, with 30+°C in several places and some new records. One tenth of a degree away from the hottest recorded in June for Churchill! #MBwx #NUwx #Nunavut #Manitoba 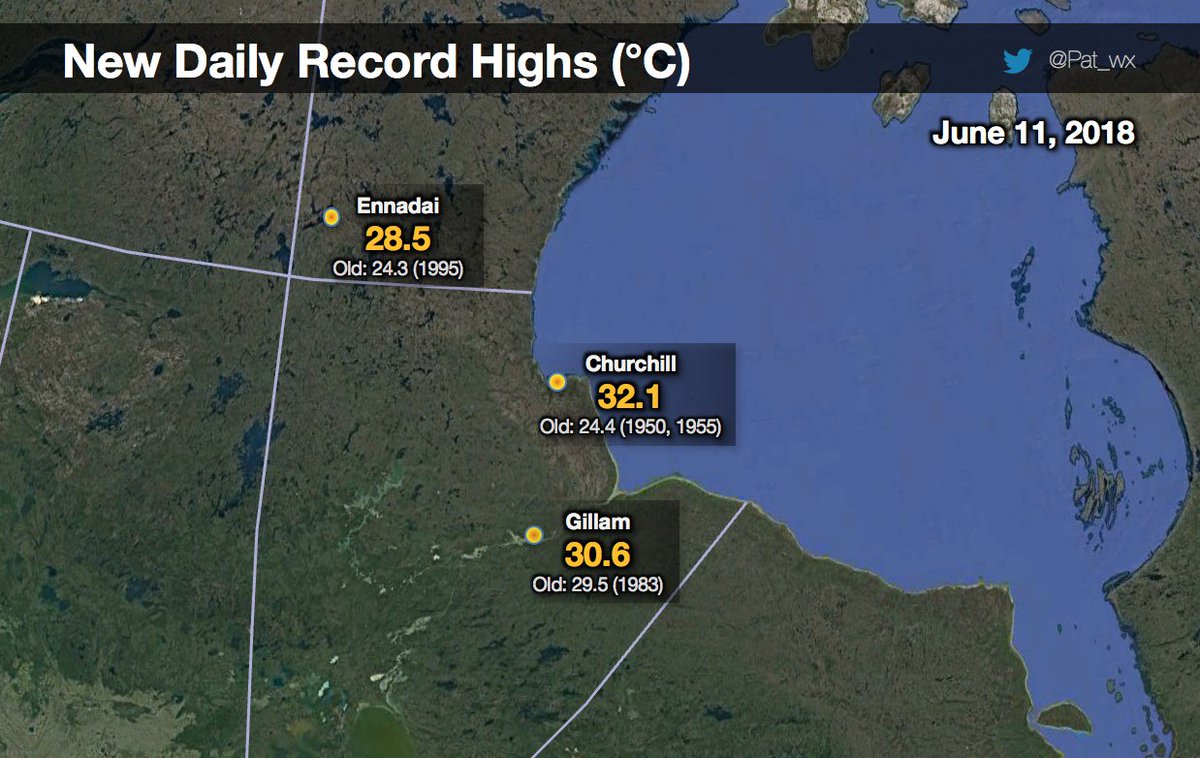 I’m not a climate scientist, but climate scientists deserve tremendous credit and appreciation. Despite unprecedented scrutiny, as well as political and economic pressure to discredit, harass and block their work, they have preserved in their pursuit of the truth of global warming and its causes. They do so without any axe to grind, or any personal gain but because its the right thing to do. Some claim they do it just to get funding for their work, but that is absurd as there are a lot easier paths to funding studies of the physical/earth sciences than pursuing climate science in this day of age.

Despite the name change, go hug a climate scientist anyway. The generations to come will appreciate it.

As far as heat episode #3 goes the Southwest will continue to bake tomorrow while Texas and the southern Plains simmer in fairly typical June heat:

A weather pattern change will bring both heat and some wildfire relief to the Southwest and Rockies late this week.