Yet another month is coming to an end, so it is time for me to present my “Record Scoreboard.” My, time is flying by fast with one more month of boreal summer left, August. I’m afraid that due to carbon pollution, though, summer and early fall can’t end soon enough for many people, especially in the fire ravaged West. Anyway, here is the latest data on the scoreboard for the United States as of 8/27/18:

All monthly ratios of  > 10 to 1 DHMX to DLMN or > 10 to 1 DLMN to DHMX are in bold type. The rankings are for the lower 48 states with the warmest ranking since 1895 of average temperatures being 124 and 1 being the coldest as of 2018. Blue colors represent cold months and red warm. Those months with counts close to a 1 to 1 ratio of highs to lows are colored black. Counts for July 2018 are similar to those of June 2018 with a ratio of just under 6 to 1 of  RDHMX to RDLMN,  a climate change signature. So far in the NCEI records site (https://www.ncdc.noaa.gov/cdo-web/datatools/records) we see the following daily record counts for July 2018:

Nights are warming faster than days, and data from July 2018 reaffirms what we already know as climatologists.

I saw this information from Rob Elvington indicating that July 2018 across the lower 48 states was well above average: 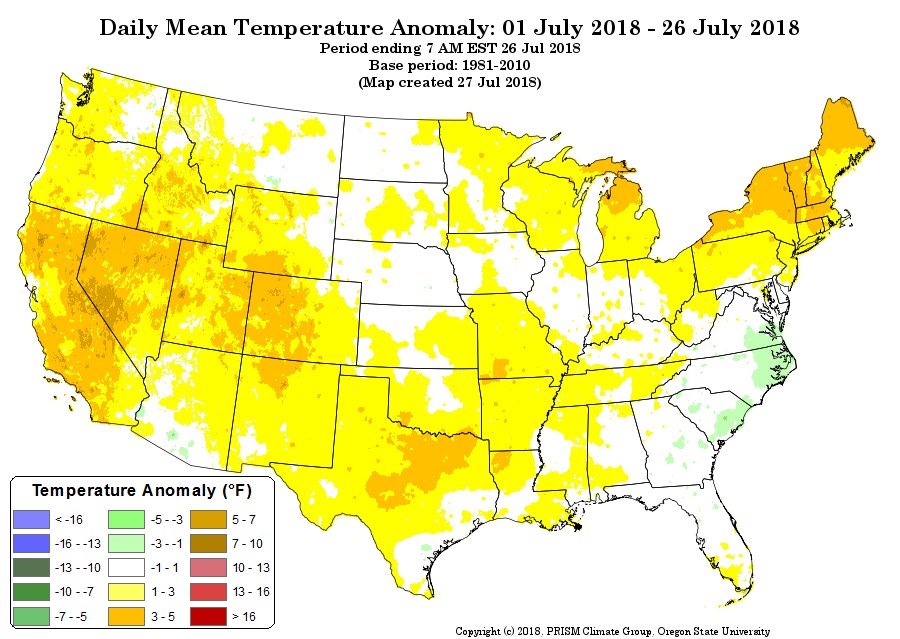 Will July 2018 get pegged as one of  the top ten ranked Julies since 1895 similar to what we saw in May and June? We will know when NCEI issues their climate summary around August 8th.

We have seen a lot of record heat this summer and year, but looking at the record scoreboard not astounding numbers. 2012 and 2016 remain the most jaw dropping years for heat in the U.S. not only this decade but since rankings were started by NCEI in 1895:

Globally with all of the hullabaloo behind all-time record reports I’m a little surprised that this NCEI total as of 8/27/18 isn’t higher:

Perhaps se will see many more all-time reports come into the system into early August.

Our western heat wave is slowly waning. In fact the National Weather Service has discontinued all heat advisories except in Washington and in the Snake River Valley of Idaho:

On Tuesday heat won’t be a major weather concern in the U.S. except in the West:

Elsewhere across the planet I did see an ominous sign as we head into August: 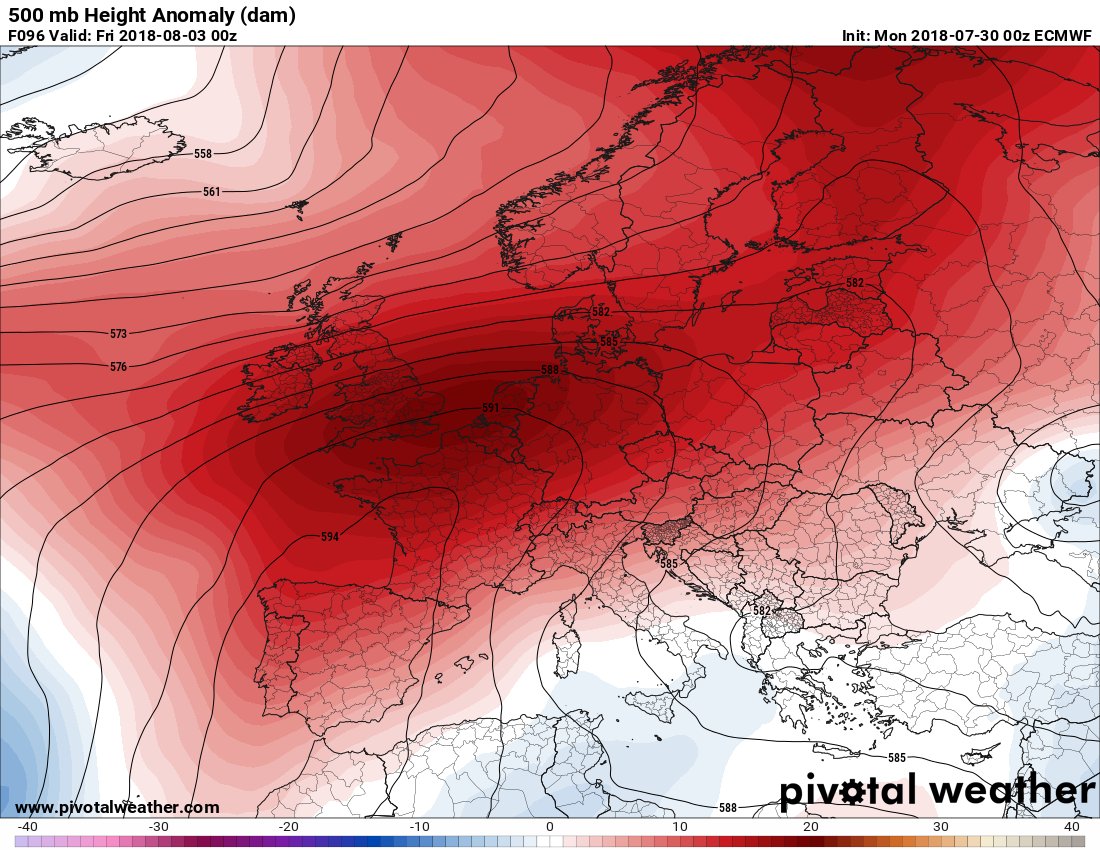 I’ll be adding relevant news items to this post as the day progresses such as this from Weather Underground:

What’s made wildfire a year-round threat in California? https://bit.ly/2LyBeYq

“The impacts of #climatechange are no longer subtle,” #PennState‘s @MichaelEMann told @CNN. “We are seeing them play out in real time in the form of unprecedented heat waves, floods, droughts and wildfires. And we’ve seen them all this summer.”  http://ow.ly/sFTE30l63vQ 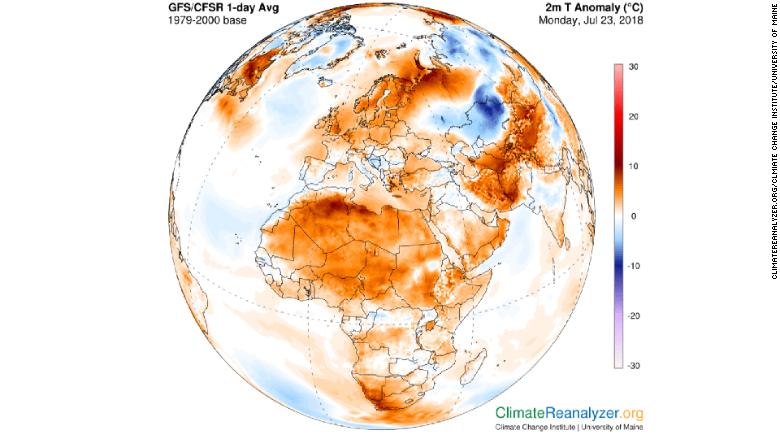 11:01 AM – 30 Jul 2018
Here are some “ETs” from the recent heat wave in Europe as reported and quoted from Weather Underground:
https://www.wunderground.com/cat6/2018-European-Heat-Wave-5-Times-More-Likely-Due-Climate-Change
“The great northern European heat wave of 2018 continued to set all-time records on Friday, July 27, with Norway bearing the brunt of the record heat. According to weather records expert Maximilliano Herrera, dozens of all-time heat records fell at stations with a long period of record (POR) in Norway, some falling by a remarkable 4°C (7°F)—a very rare margin to break an all-time heat record by. Mr. Herrera, along with weather records experts Etienne Kapikian and Michael Theusner, have put together the following list of stations that set notable all-time heat records July 25 – 27. These stations had at least a 40-year period of record (POR).”

Norway (a very partial list, with just the most important records):

At least nine other stations with a POR of at least 40 years set all-time heat records for the month of July on July 26.

Some of the above records are posted in this Axios piece by Andrew Freedman:

Six of California’s most destructive wildfires have struck in the past 10 months: https://wxch.nl/2LMgw6M 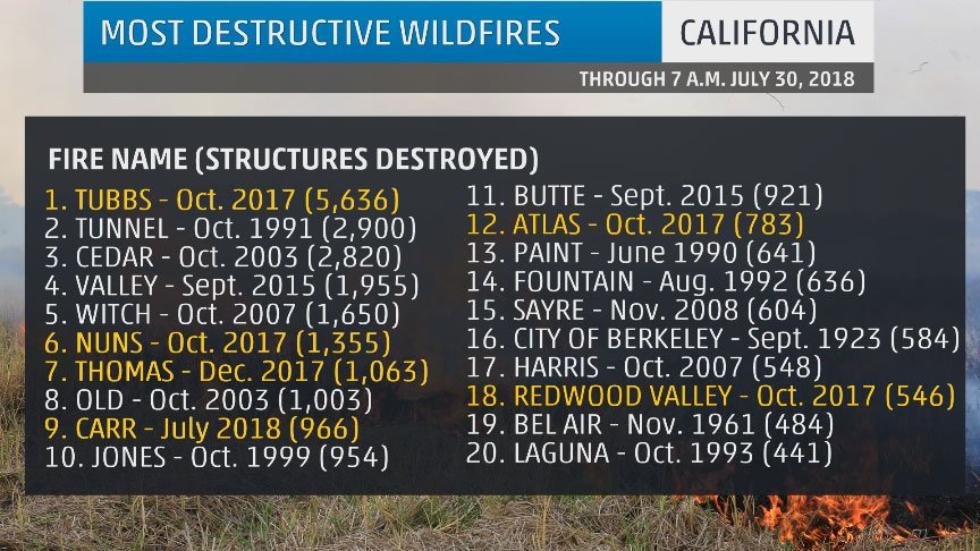 This also means that today is the 15th day this month that we’ve reached at least 90° in Portland. This is the most in any July on record at Portland airport. In fact, it’s the most in ANY month since records began at PDX in October 1940. #pdxtst #orwx

NWS PortlandVerified account @NWSPortland
In case you missed it, the high temperature so far at Portland is 92°F. This marks the NINTH day in a row with an afternoon high temperature of at least 90°. This stands alone as the 2nd longest such streak at Portland airport since records began in Oct 1940. #orwx #pdxtst
Show this thread
6:38 PM – 30 Jul 2018

Thank you for the 16 states that have & are sending fire resources to California to help battle the #CarrFire, #MendocinoComplex, #FergusonFire, #WhalebackFire and #CranstonFire. These resources will be helpful in increasing containment on these large wildfires.

Our heat wave continued un the West with the most “extreme” temperatures occurring in the Pacific Northwest.  Maxes sere average to below average east of the Rockies with no significant heat issues.
(If you like these posts and my work please contribute via the PayPal widget, which has recently been added to this site. Thanks in advance for any support.)