Friday August 17th… Dear Diary. The main purpose of this ongoing post will be to track United States extreme or record temperatures related to climate change. Any reports I see of ETs will be listed below the main topic of the day. I’ll refer to extreme or record temperatures as ETs (not extraterrestrials)😊. Here is today’s main climate change related topic:

Perhaps the one zone to watch across the planet for early signs of true climate change is the Sahel in Africa. The Sahel is a semiarid belt extending from western and north-central Africa extending from Senegal eastward to the Sudan, forming a transitional zone between the arid Sahara Desert to the north and a belt oh humid savannas to the South. As the planet heats due to carbon pollution the Sahara is getting hotter and drier, encroaching upon the Sahel from the north. We have also learned that a hotter atmosphere holds more moisture and releases heavier downpours. Some climate models suggest that savannas to the south will be moving north also encroaching on the Sahel making the region more tropical, which would not necessarily be a bad thing. What is some of the latest science concerning the Sahel tipping point?

On Steffen’s chart the Sahel becomes a net heat producer rather than a cooling factor for the planet once global averages get to between +3 to +5 above preindustrial conditions. Obviously if the Sahara expands great chunks of the Sahel, which breaths in carbon due to its flora, will be gone. Increasing drought in the northern Sahel is expanding the Sahara southward across countries such as Sudan, which are quite poor and can ill afford to deal with the climate crisis.  I wrote about “The Great African Green Wall” earlier this year letting all know that despite poverty many people across the Sahel know what is at stake, putting up a good fight against the invading Sahara:

Here are some excerpts:

I saw this graphic indicating that some areas of the planet are trying their hand at mitigation to thwart the worst effects of climate change: 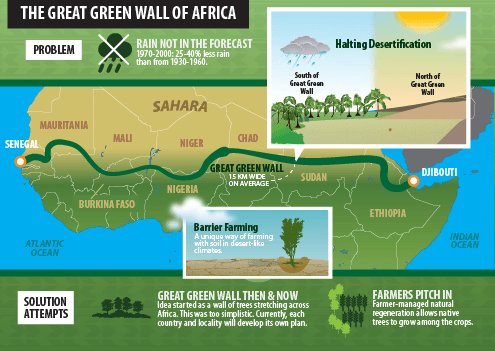 6:56 PM – 25 Jun 2018
Unlike China’s Great Wall of old keeping out foreign invaders, this new great wall will inhibit desertification, being a testament to our times, and historically could be a make or break project for 21st century civilization. If successful in the next few centuries one area of the world will have proven that things can be done sustainably against climate change.
If not and the Sahara eats up the Sahel area, no matter how much planting is done, this litmus test will indicate that too much global warming will have taken place for such a bulwark to have a long term effect. Nature will have won the mitigation and perhaps adaptation wars, not only in Africa but world wide.
One big question I have, though, is whether or not increased heavy rainfall, as we have seen from climate change, will offset increased Sahara heat. Perhaps the huge and expensive effort to create the green wall isn’t necessary. One particular study cited earlier this year says yes, the Sahara is expanding:
https://weather.com/science/environment/news/2018-03-31-sahara-desert-expanding-climate-change
Quoting from the article:
“The trends in Africa of hot summers getting hotter and rainy seasons drying out are linked with factors that include increasing greenhouse gases and aerosols in the atmosphere,” said Ming Cai, a program director in the National Science Foundation’s Division of Atmospheric and Geospace Sciences, which funded the research. “These trends also have a devastating effect on the lives of African people, who depend on agriculture-based economies.”
The latest study says that the Sahara is winning against any process that might green the Sahel:

“The desert has expanded southward during summer by about ten percent, so it’s a fairly significant increase in the desert expanse over this 93-year period that we analyzed.” (Click on the picture for the article.)

5:59 PM – 18 Aug 2018
Another study indicates as that the Mediterranean area warms the Sub-Saharan monsoon increases greening the Sahel, though:
https://phys.org/news/2016-07-warmer-mediterranean-sahel-green.html
Quoting researchers from this article:

Global Warming may very well expand the Sahel northward due to increased precipitation around the periphery of the Sahara because of added atmospheric moisture, but our best science indicates otherwise. Perhaps these factors will be a wash, and the Sahel will not be affected severely despite planetary warming. The large, ongoing planting project in the Sahel designed to fight desertification should continue as a precaution, with a side benefit of naturally taking some carbon out of the air.

Today I have added a link to this article saying that perhaps climate change will be a good thing for the Sahel:

“Climate change can be a good thing. At least for the arid Sahel region in Africa, where rainfall has been increasing as the world warms up. But to avoid dire negative consequences, precautions must be taken now.”

I’m going to file this issue under my growing “how bad how soon” AGW list. I’ll post any other info or other’s thoughts on the Sahel as they cross my radar in this post.
………………………………………………………………………………………
On Saturday there won’t be too much change from the temperature profile from Friday with the most anomalous heat remaining in the West:

Yikes! This corresponds to the lower 48 states also having its warmest May-July period on record.

The last three months have been the warmest May to July observed in Europe since at least 1850.

This was a heat wave on top of long-term warming.

However, if the recent rate of warming continues, then by 2040 a typical summer in Europe might be just as warm as 2018 has been.

“The amount of toxic wastewater produced by #fracking is just unbelievable”
https://www.motherjones.com/environment/2018/08/the-amount-of-toxic-wastewater-produced-by-fracking-is-unbelievable/ …
@MotherJones 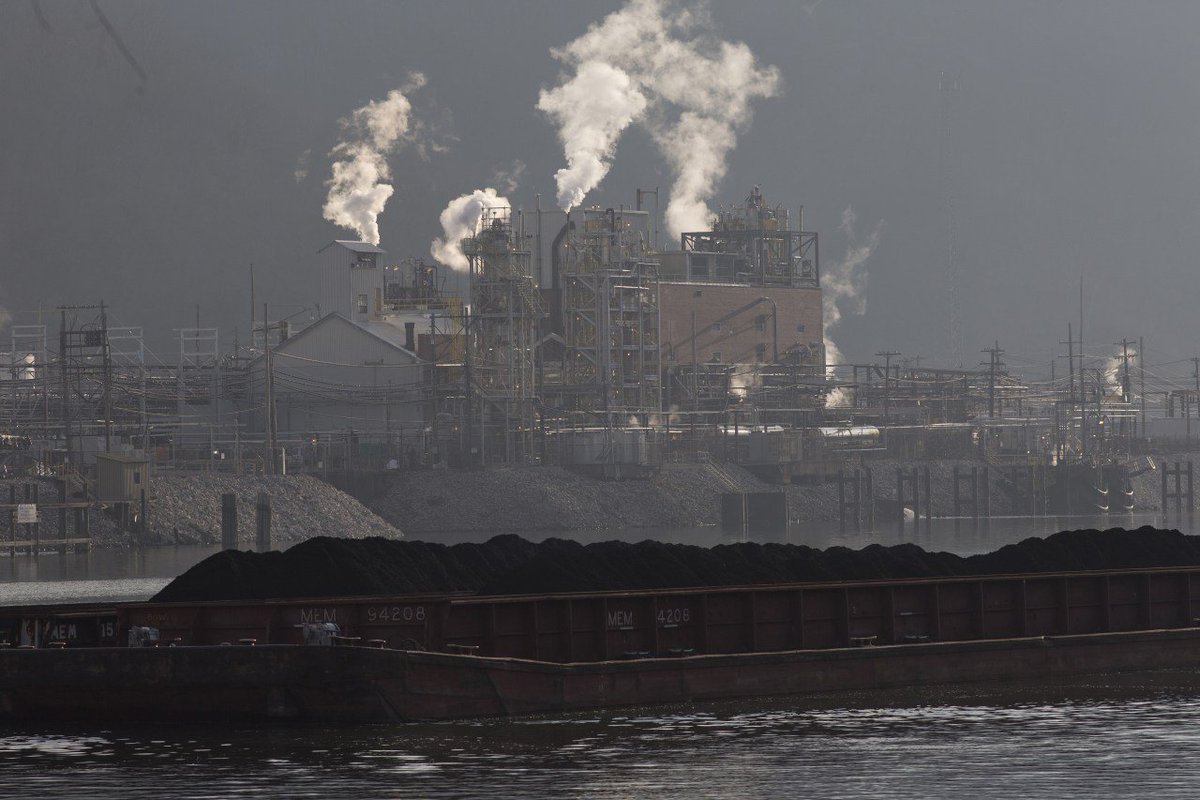 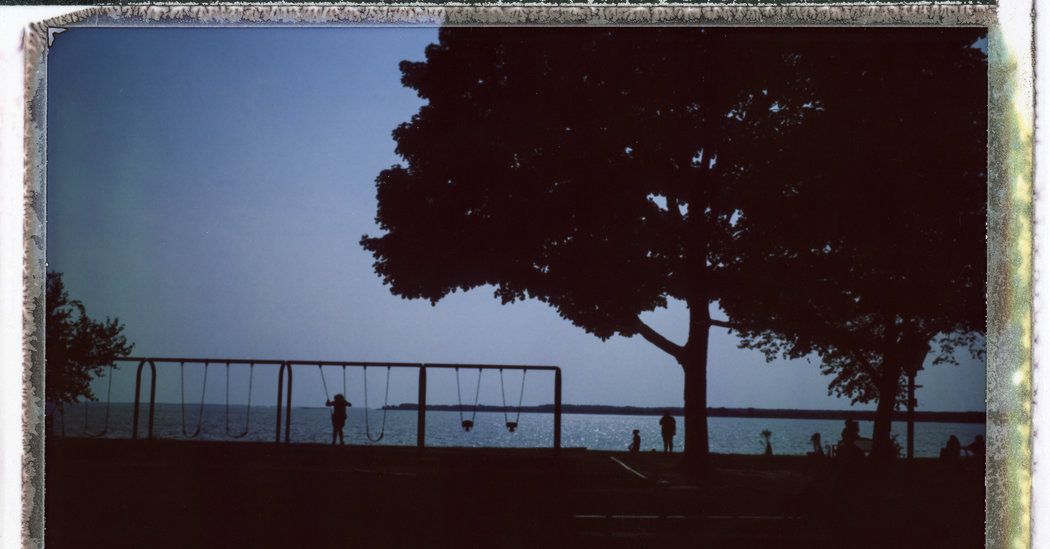