Wednesday August 29th… Dear Diary. The main purpose of this ongoing post will be to track United States extreme or record temperatures related to climate change. Any reports I see of ETs will be listed below the main topic of the day. I’ll refer to extreme or record temperatures as ETs (not extraterrestrials)😊. Here is today’s main climate change related topic:

Looking at the strength, scope, and dead on approach of Maria to Puerto Rico last year deep down most meteorologists following the system knew that the unfolding disaster would rival if not surpass the devastation left by Katrina in 2005. We optimistically were scratching our heads when only 64 deaths were reported across the island in the wake of the storm. That figure just didn’t stack up looking at aerial photos and knowing the fact that the majority of Puerto Rico was without power for months. Now a year after category 4 Maria directly hit Puerto Rico that figure has been adjusted to 2975 deaths, mostly from poor, elderly, sick, and disabled people not able to get much help in the wake of the storm. If humanity is going to eventually tackle and solve the climate problem we must recognize the consequences of global warming, not proverbially sweep facts and truth underneath the carpet. In this country this is not the age of science and even facts and truth ruling the roost, though.🤨

Yesterday many an article was written on the “actual” number of fatalities that can be blamed in Maria. Here is one:

Quoting some from this article:

The big picture: The new study, released Tuesday, found that Hurricane Maria and its aftermath resulted in an estimated 2,975 deaths on the island from September 2017 through February 2018. However, it also noted that excess, storm-related deaths may have continued beyond that period.

According to the new study, the original figure stemmed from the government’s classification of deaths directly attributable to the storm — like those caused by “structural collapse, flying debris, floods and drownings” — rather than those that occurred in the hurricane’s aftermath.

The Details: Deaths in the wake of the Category 4 storm were caused in part due to the complete collapse of the power grid and lack of health care services in rural areas of the island. Previous studies by other research groups also found a far higher death toll than the government initially estimated.

How they did it: A key component of the study was an excess mortality study, which involved analyzing past mortality patterns from 2010 to 2017 in order to predict the expected number of deaths had Hurricane Maria not occurred, and comparing this to actual deaths observed.

The researchers also needed to project forward mortality with and without the hurricane, which required taking account for the massive migration off the island in the storm’s wake. For observed deaths, the study relied on records for all deaths between September 2017 and February 2018 from the Puerto Rico Department of Public Health.

What they found: The study estimated that total excess deaths after the hurricane, when accounting for off-island migration, amount to 2,975 for the September 2017 through February 2018 period.

“The results of our epidemiological study suggest that, tragically, Hurricane Maria led to a large number of excess deaths throughout the island. Certain groups – those in lower income areas and the elderly – faced the highest risk,” said Carlos Santos-Burgoa, the principal investigator of the project and a professor of global health at GW Milken Institute School of Public Health.

After the death figure was revised I am sure that finger pointing will continue with calls for justice coming from many quarters. We know that the poorest among us with the least resources will be hurt the most by climate change. Katrina and Maria, two storms that affected the poor the most, are a couple of the first body blows that climate change will give humanity over the course if this century.

“[T]here’s no way for us to compare what happened in regards to excess deaths in Puerto Rico to any other past disaster,” writes @JohnMoralesNBC6 in thoughtful, informed and important perspective on Hurricane Maria’s death toll:
(Click on the picture to see the article.)
10:42 AM – 29 Aug 2018

Thankfully the Atlantic 2018 hurricane season, so far, has been much less active than that of 2017 partly because sea surface temperatures in the Cape Verde area are below average. SSTs from northern Africa to the Lesser Antilles are one of the few areas on the planet with cool anomalies. Nevertheless, there are warm anomalies from the Caribbean northward to Florida:

Oh, and by the way SSTs have warmed in the Cape Verde area considerably from that of earlier in the season:

Since it is the height of the Cape Verde season some tropical systems will form from that region in September but may not threaten Puerto Rico we hope. What has been persistent are higher than average SSTs extending northwest from Puerto Rico to Florida this year. We can make a strong connection to these high SSTs (and fertilizer) to a climate change problem currently plaguing Florida: 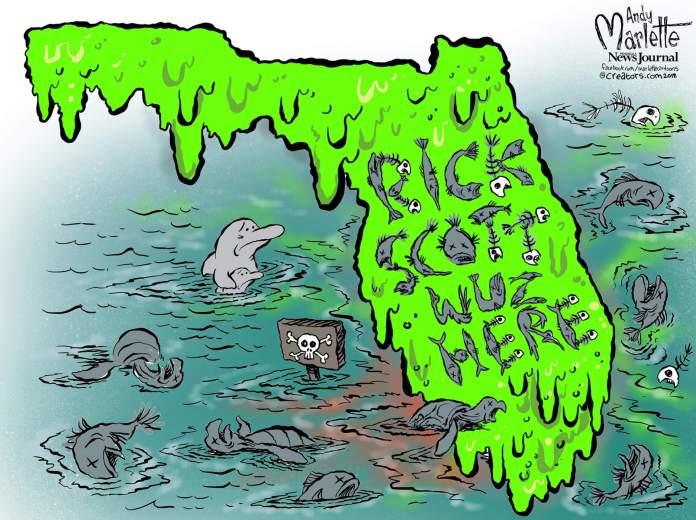 7:23 AM – 28 Aug 2018
Here I will quote some from Allan’s linked article:
Florida is in the middle of an ecological emergency right now, as well as being in an actual declared state of emergency. Between massive algae blooms and the red tide, Florida’s economy could take a body blow unlike anything short of a hurricane. From ABC News:
“As Florida reckons with two algae phenomena, one being the blue-green nutrient-rich algae in Lake Okeechobee, and the other being the naturally occurring red tide in the Gulf Coast shores, experts say Florida has never seen anything like what’s being experienced this summer. With a number of policy and funding rollbacks from current elected officials running for office, they don’t know when it will get better. “The bloom may have naturally occurred, but naturally it might not have gotten as intense as it is now if didn’t have those nutrients from human sources that fueled the growth,” said Karl Havens, director of the Florida Sea Grant College Program and a professor at the University of Florida IFAS. Those harmful nutrients being nitrogen and phosphorus seeped in the soil and wetlands north of Lake Okeechobee from pollutants like under-treated sewage water, leakage from home septic systems, and fertilizers from generations past after the state restricted the agricultural industry from using them.”
And people there are beginning to point green-slimed fingers at their elected officials—most notably, at Governor Rick Scott, who is running a strong race to unseat incumbent Democrat Bill Nelson, but now literally is having a load of dead fish dropped in his lap.
I contend that above average SSTs have exacerbated the algae bloom in Florida. Connecting the climate change dots, carbon pollution is partially responsible for Florida’s green, slimy woes.
I’ll emphasize my main point for this post here. Politicians who are human, whether we like it or not, are our leaders who must work with the private sector to solve problems, recognizing them for what they are, not denying that they don’t exist. Those who sweep problems like climate change underneath the carpet must be swept out of office. One sweep deserves another.
………………………………………………………………………………………………………………………………………….
On Thursday the worst of the record heat will break in the Northeast:

Marginally dangerous heat will persist across the southern half of the U.S.

A front cooled most of the Midwest. Temps soared as high as the upper 90s ahead of the front in the Northeast. A low grade heat wave continued across the South. Temperatures were near average across most of the West.

Here are some major ET reports for today: