Tuesday August 28th… Dear Diary. The main purpose of this ongoing post will be to track United States extreme or record temperatures related to climate change. Any reports I see of ETs will be listed below the main topic of the day. I’ll refer to extreme or record temperatures as ETs (not extraterrestrials)😊. Here is today’s main climate change related topic:

Connecting The Climate Dots…California To Hawaii

More than any other large area of the United States the West has been hit the hardest by climate change related weather both in 2017 and 2018. Most recently Hurricane Lane brought another “once in a 500 year flood” to Hawaii. California has been scared by numerous conflagrations like the Carr Fire the last couple of years mostly due to long heat waves. This week there has been a plethora of articles tying in climate change to events from the West. Let’s highlight some for posterity in the Extreme Temperature Diary.

Switching to the Washington Post we see this: https://www.washingtonpost.com/news/capital-weather-gang/wp/2018/08/27/hawaiis-rain-from-hurricane-lane-topping-50-inches-ranks-among-most-extreme-on-record-in-u-s/?utm_term=.67b91f8070e6

(The Washington Post) – Hurricane Lane, which collapsed in spectacular fashion as it drew close to Hawaiian Islands, could have been much worse. Had it held together and edged slightly farther north, severe rain, wind and surf would have bombarded Oahu and Maui. Instead, those islands were grazed.

Even so, bands of torrential rain repeatedly slammed into the Big Island’s eastern half over a period of five days. The total amount of rain, measured in feet, soared to historic levels: 51.53 inches were measured on Mountain View, about 15 miles southwest of Hilo.

This preliminary total ranks as the third highest for a tropical storm or hurricane in the United States since records began in 1950, according to the National Weather Service office based in Honolulu.

The rainfall from Lane ranks right up there with that of Harvey, which is in keeping with what is expected with climate change exacerbating extreme precipitation events. Lane had been a category 5 system getting much closer to Hawaii than is typical. Strong hurricanes usually die before getting within a few hundred miles of Hawaii mainly because average sea surface temperatures are cool enough to protect that state. Not any more. Current SSTs are well above average in a stripe from Hawaii to Southern California:

This universe and planet act on cause and effect with each in place domino falling to produce an outcome. Besides hot weather leading to fires there is another nasty event this warm water is causing…dead fish (burning fossil fuels leads to a worse greenhouse effect and global warming leading to higher SSTs and then oh the stench):

California State Parks scientists are running tests to determine the cause, but officials suspect higher-than-normal water temperatures played a role.

The die-off comes amid a summer of extreme heat across California that has included record ocean temperatures from San Diego to Los Angeles and beyond.

Warming water temperatures can alter the marine food chain in various ways — bringing about toxic algae that make crabs, for example, dangerous to eat. Researchers are also seeing more warm water animals, such as jellyfish and stingrays, off the coast.

So we can see a strong connection between Hawaiian heavy rainfall from Lane and the Malibu fish die-off looking at above average sea surface temperatures. The third item for this trifecta of unpleasantness is new findings indicating that California will be far worse off due to climate change than previously thought. If the last two years are any indication California may have seen the last vestige of any “normal” year of weather prior to the start of this decade:

In short: “Heat waves will grow more severe and persistent, shortening the lives of thousands of Californians. Wildfires will burn more of the state’s forests. The ocean will rise higher and faster, exposing California to billions in damage along the coast.” Please read the entire article for the rest of the grim details called out by governor Jerry Brown. Also, here is the link to the assessment: http://www.climateassessment.ca.gov/state/docs/20180827-StatewideSummary.pdf

On the subject of wildfires, tonight I’m going to leave you with one chart from the assessment that speaks for itself:

Tomorrow I will connect some climate change dots between Florida and Puerto Rico. I bet you guys already know what I will be writing about. Yep, deaths from Maria and algae blooms.

Tomorrow more near record heat will persist in the Northeast: 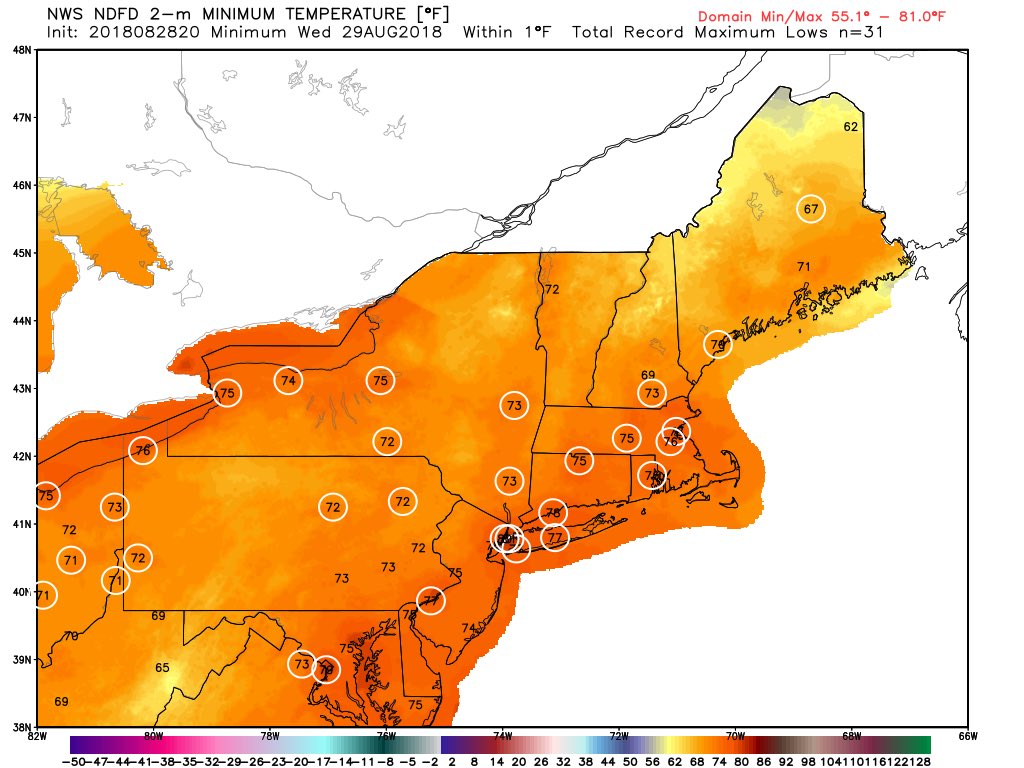 Maxes were within a few degrees of records along the East Coast. Above average temperatures and high humidity were felt across most of the Plains, Midwest, and South. A cooling trend was aiding firefighting efforts in the West. Early fall weather spread through the northern Plains.

This is the biggy for the week:

“The consequences of higher temperatures on the US economy may be more widespread than previously thought,”