Friday August 31st… Dear Diary. The main purpose of this ongoing post will be to track United States extreme or record temperatures related to climate change. Any reports I see of ETs will be listed below the main topic of the day. I’ll refer to extreme or record temperatures as ETs (not extraterrestrials)😊. Here is today’s main climate change related topic:

This is the last day of boreal summer 2018, so as usual I am beginning to see climate summary messages trickle onto social media, which I will post today. This is not to write that summer weather is over for the U.S. and for that matter Europe. Far from it. A warmer than average first part of September should have most in summer attire long after Labor Day comes and goes across the Northern Hemisphere. Speaking of Europe, I saw these messages today:

After somewhat more unsettled August, the Scandi Block will be back in business in September. The pattern resembles much the one in July. 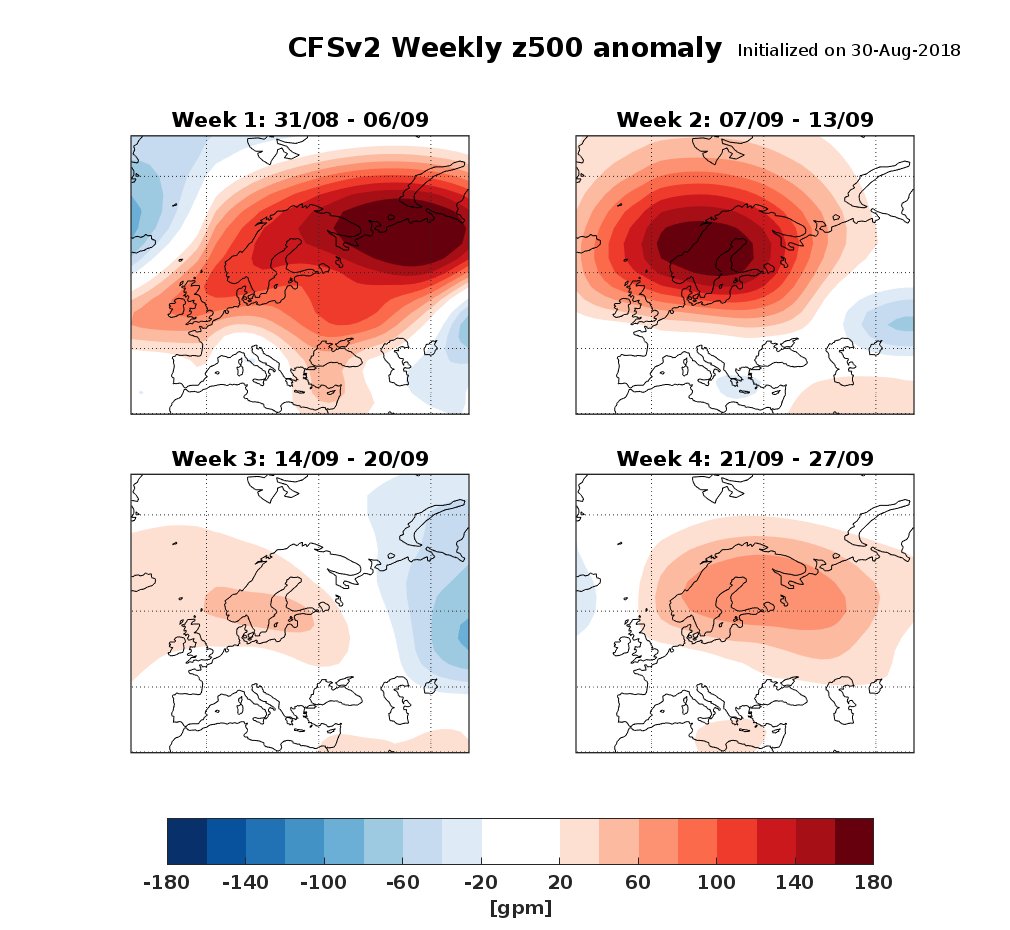 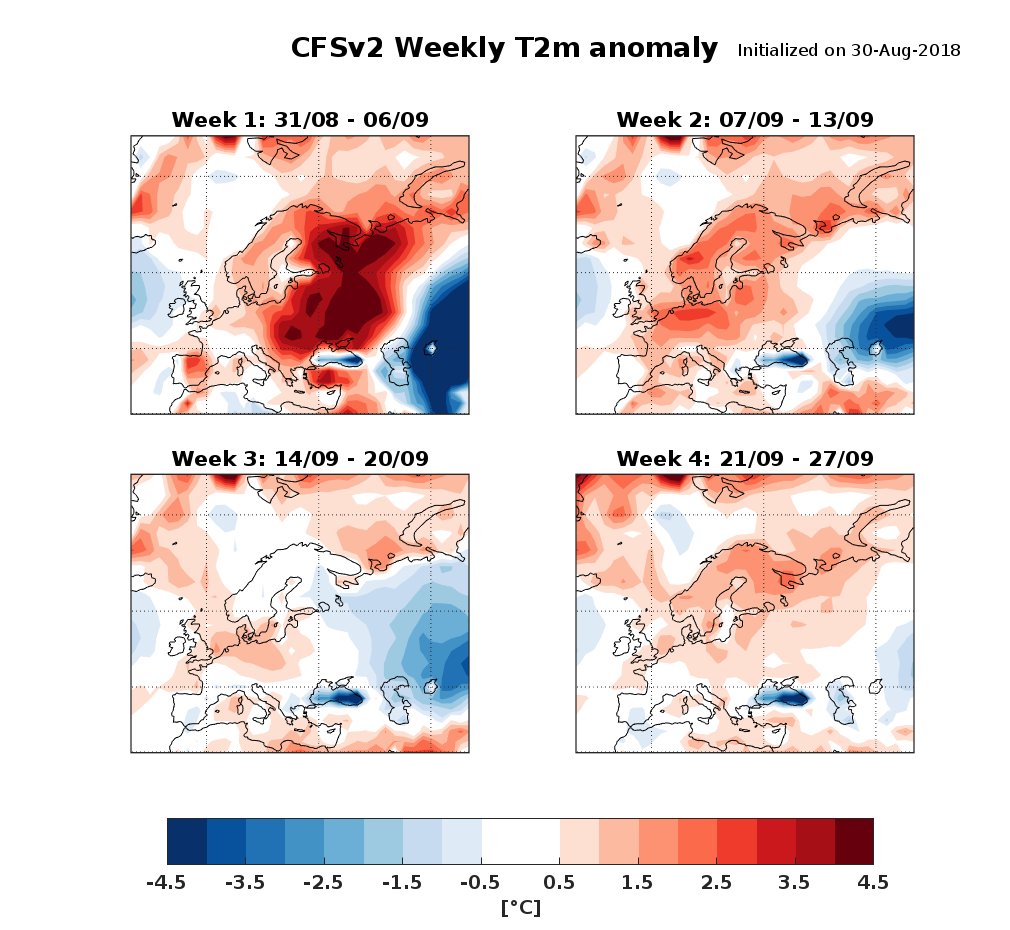 The warm spell April to July 2018 over Europe has been truly and worryingly exceptional compared to the last 40 years.. (data: @ECMWF Era-Interim). Thanks @frejaandTIH . @CopernicusECMWF 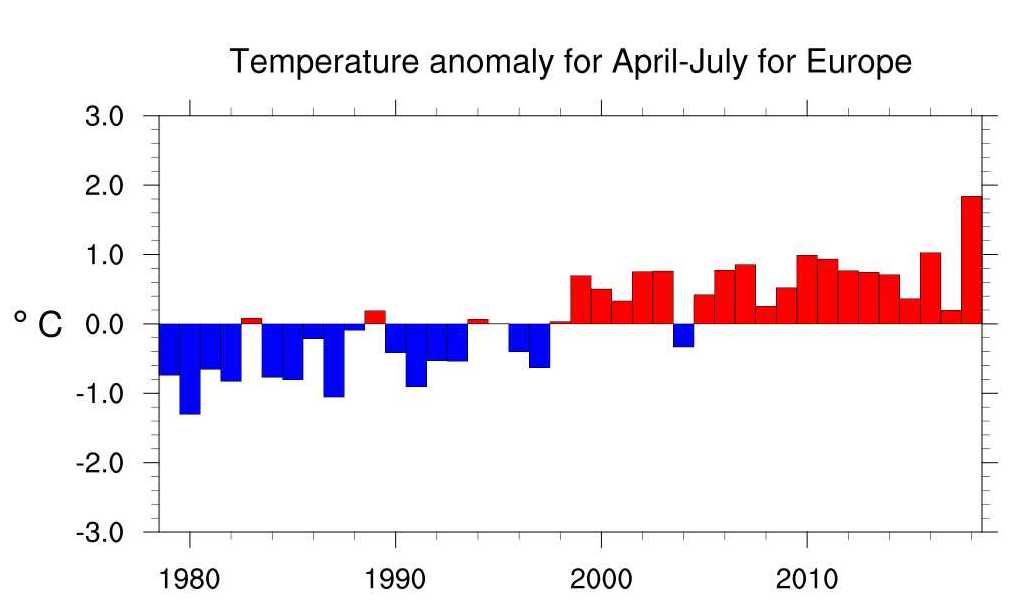 The last four months have been exceptionally warm across Fennoscandia. In fact, people living in the capitals of #Finland

have never experienced such a warm May-Jun-Jul-Aug period. #heatwave2018 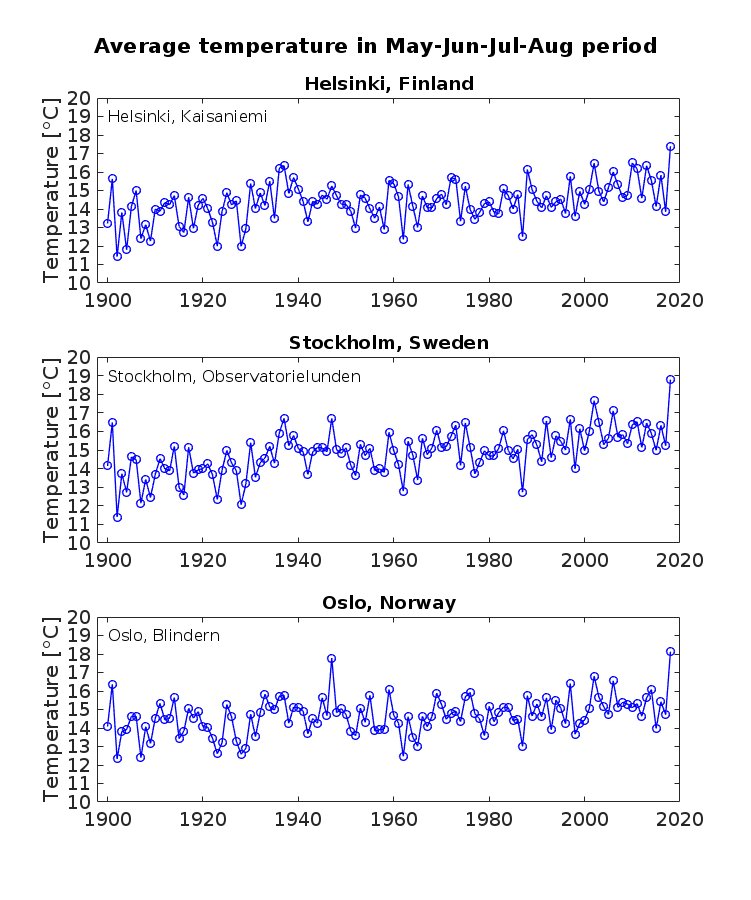 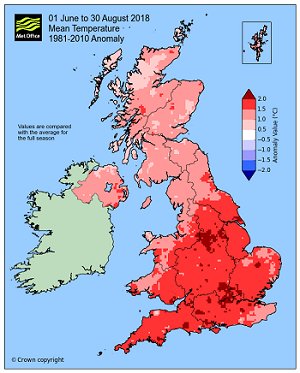 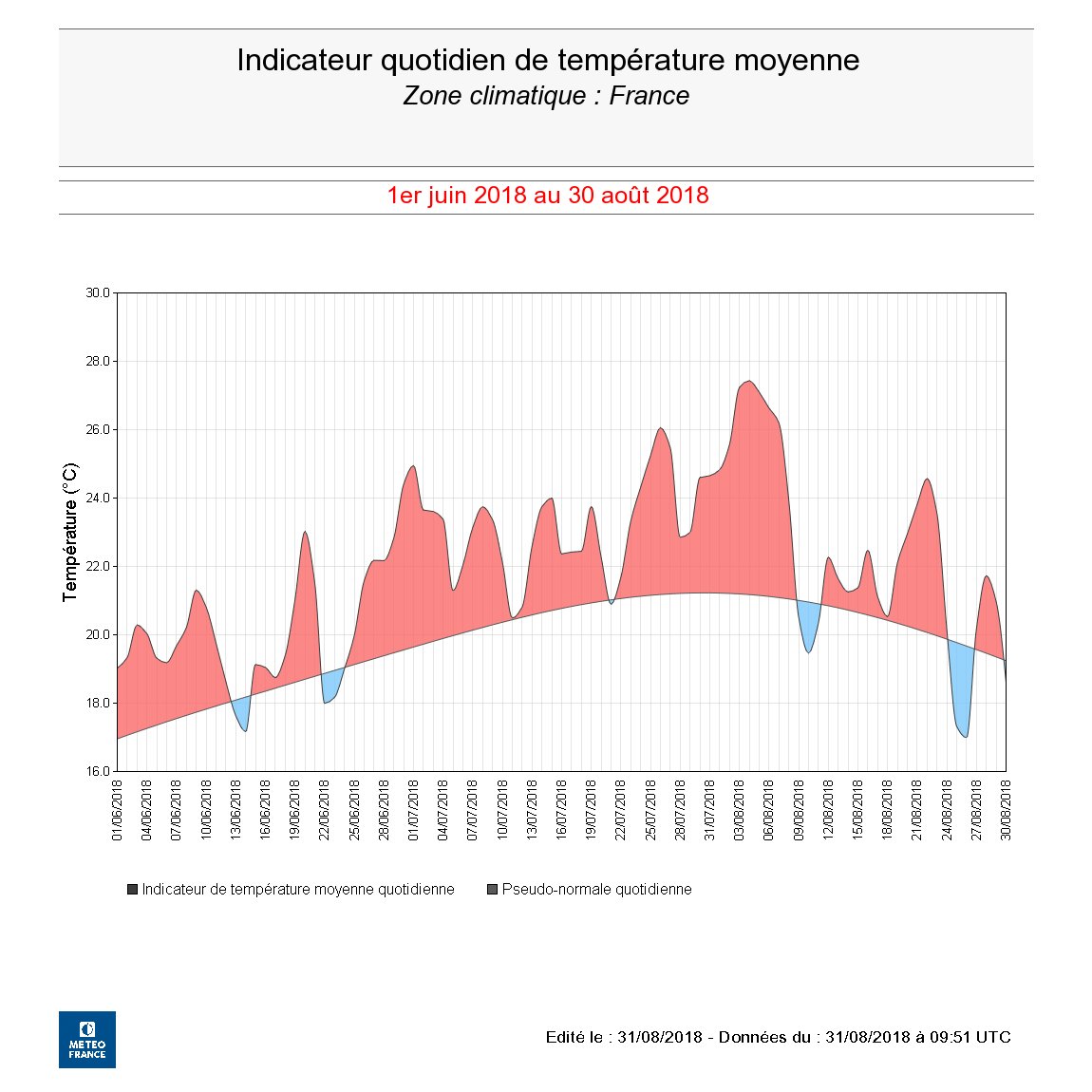 A phenomenal heat record: so hot were the past five months in Germany! The old record from 2003 was beaten by a full 1.6 °C! Scale on the left shows the temperature deviation from the first 30 years of the record, the color curve the data smoothed over 11 years. 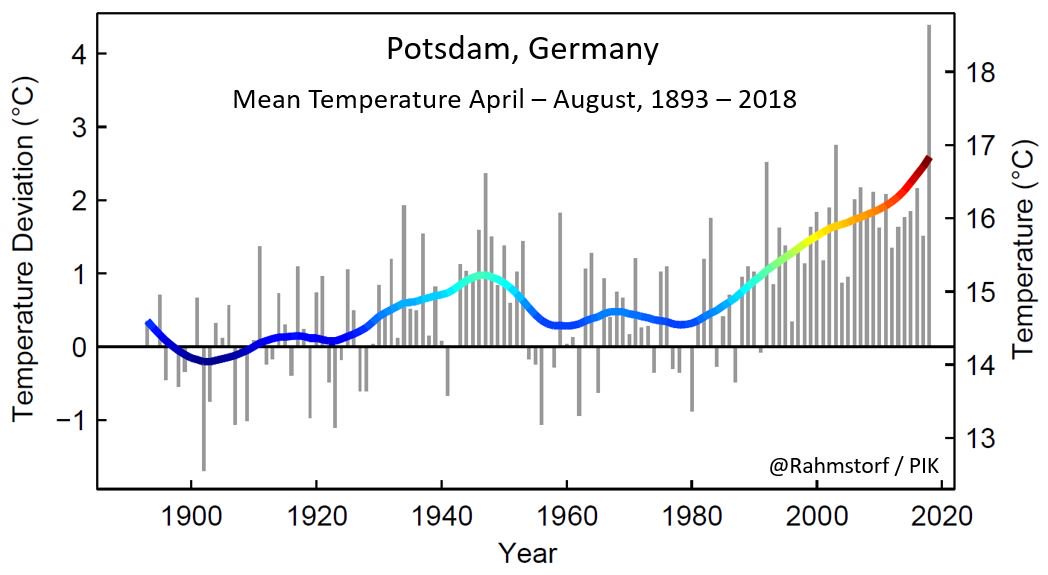 3:09 AM – 1 Sep 2018
Once climatology for Europe has been assessed next week I am sure that many countries besides the Netherlands had their record warmest summer. Only the summer of 2003 , which had one the worst heat waves in my memory for Europe, stands in the way of some territories not getting ranked as number one.
This has definitely been the summer of record heat across the Northern Hemisphere:

YIKES! All the global heat records broken this summer [so far] on one map https://buff.ly/2MG1dwJ via @axios 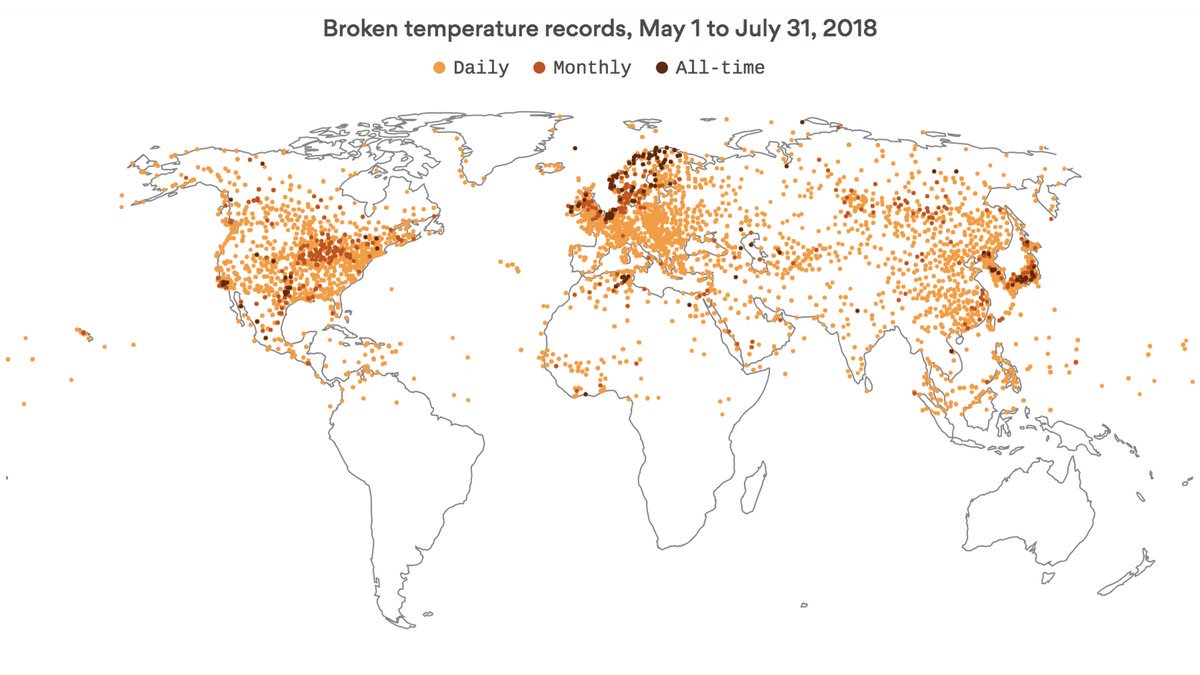 Each of the last four summers have seen 5000-7000 daily record highs with only 1000-2500 daily record lows. That’s a lot of extra, well above average heat. In a world that is neither warming or cooling we would expect about the same number of record highs and lows to be reported across the country. If  the North American ridge, which sett up around the western third of the U.S. this year, had been centered further east, I’m sure that numbers for 2018 would be even more skewed towards warmth. My home town of Atlanta, for example, hasn’t seen a max above 94F since the summer of 2016. I’m living in a little climate change oasis.😉

Well, although #August will wrap up with near-average rainfall, it was #Miami‘s coolest August in 15 years! (keeping in mind that “cool” means an avg high of 90°, an avg low of 76.9°, and obscene humidity and heat indices).

Last August was the hottest on record. #climate #flwx 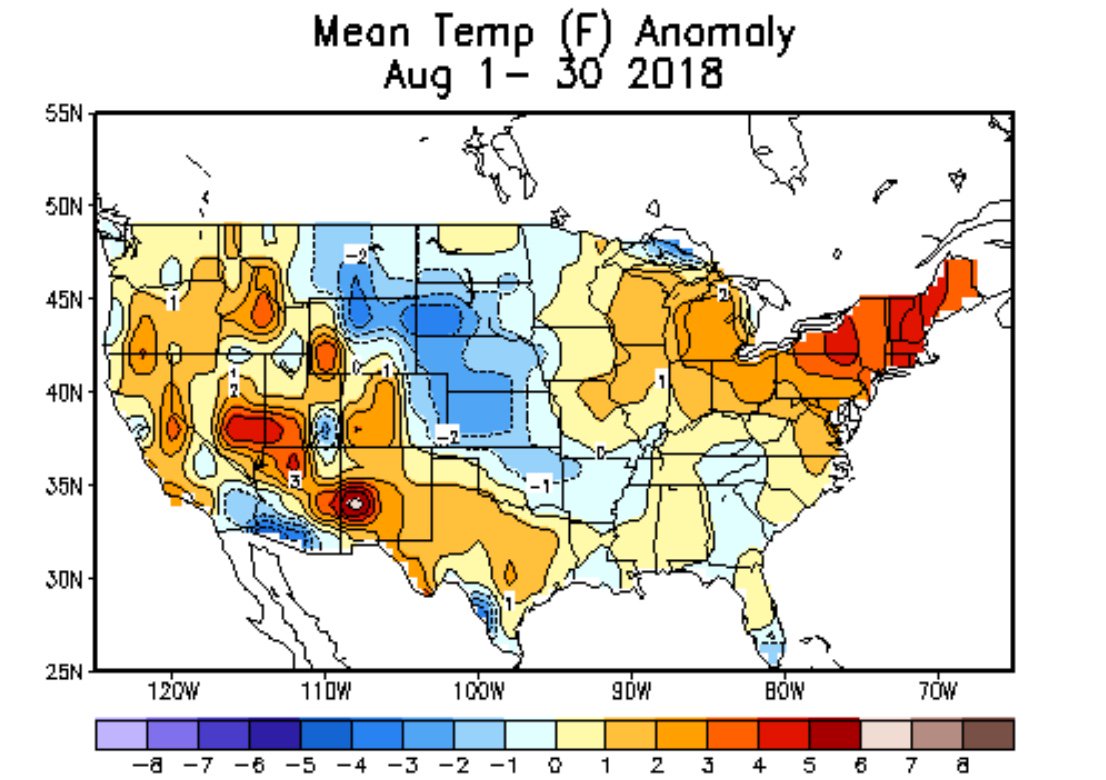 I’ll be adding more summer 2018 climatological tidbits to this post through Saturday.

Tomorrow will be a fairly typical early September day across the United States: