Overnight Florence went through an eyewall replacement cycle. The good news in association with this is that Florence didn’t attain category five status. The bad news is that when a hurricane undergoes one of these cycles the wind field spreads out, so their is now a potential bigger threat for a greater area of the coast to see very high winds well in excess of 74 mph winds (hurricane threshold force). It’s certain now that Florence will make a North Carolina landfall coming very close to that states coast by Thursday evening.

What we still don’t know is whether or not the strength of Florence will be anywhere from CAT 2-5 at landfall. I think the most likely strength will be in the CAT 3-4 range. Florence may attain a historic CAT 5 strength later today well out to sea. Very subtle things like light wind shear and yet another eye wall replacement cycle may keep Florence from attaining CAT 5 status despite even higher sea surface temperatures ahead of the thing today through Thursday. It is also looking very likely that unlike Hugo from 1989 Florence will stall, unfortunately producing extreme, historic rainfall across a good chunk of real estate in the Carolinas and Virginia into the Appalachians. Both the Hurricane Center and the National Hurricane Center will be refining forecasts as we move forward towards an eventual landfall.

Here are some of today’s messages, which will be kept for posterity, in association with Florence. As I have been writing, I’m not going to second guess the National Hurricane Center, the best and most trusted source, unless guidance greatly deviates from their forecast. Usually if models go in a different direction NHC will make adjustments. I will snapshot model scenarios, but all reading this post should follow NHC as presented by The Weather Channel to get the best forecast.  I will group information in this fluid post under each six hour period in which model guidance is processed. The latest guidance will be at the beginning of the article with archived prior messages kept towards the end of Tuesday’s Diary. I’ll label each group with the time models are processed. So here we go:

Information coming in after the 00Z Wednesday models from 9/11/2018 were processed:

Oh mercy! The operational 00Z WED EURO bounces #HurricaneFlorence off the NC coast on Friday with the system moving southwest to #Savannah before finally moving inland Sunday. Now my home state of #Georgia is in play on this very weird looking model run. There are no words… 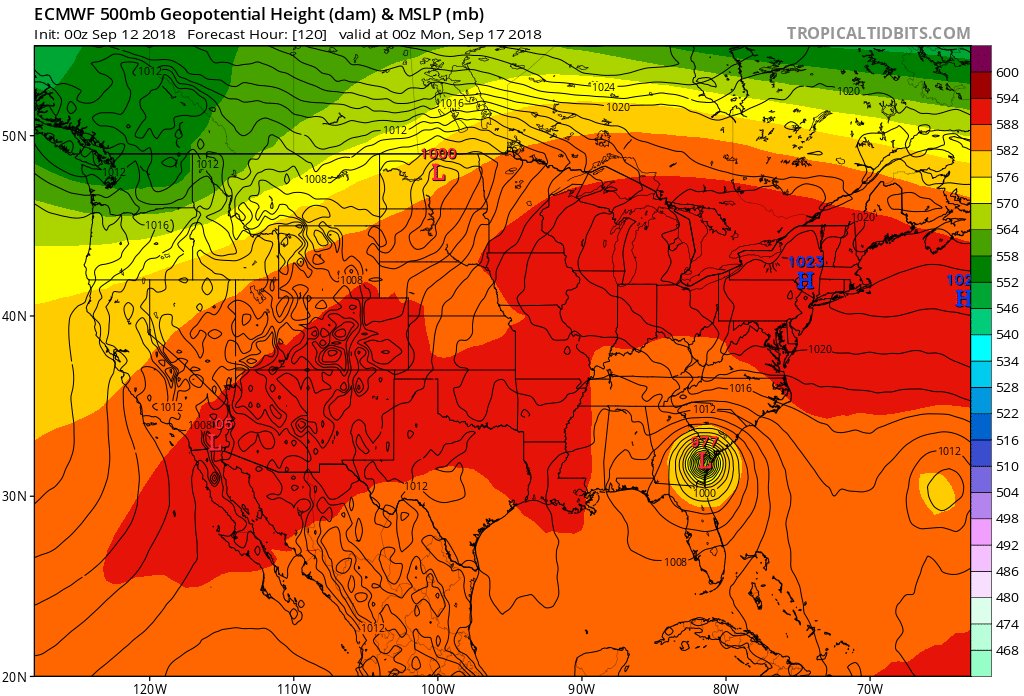 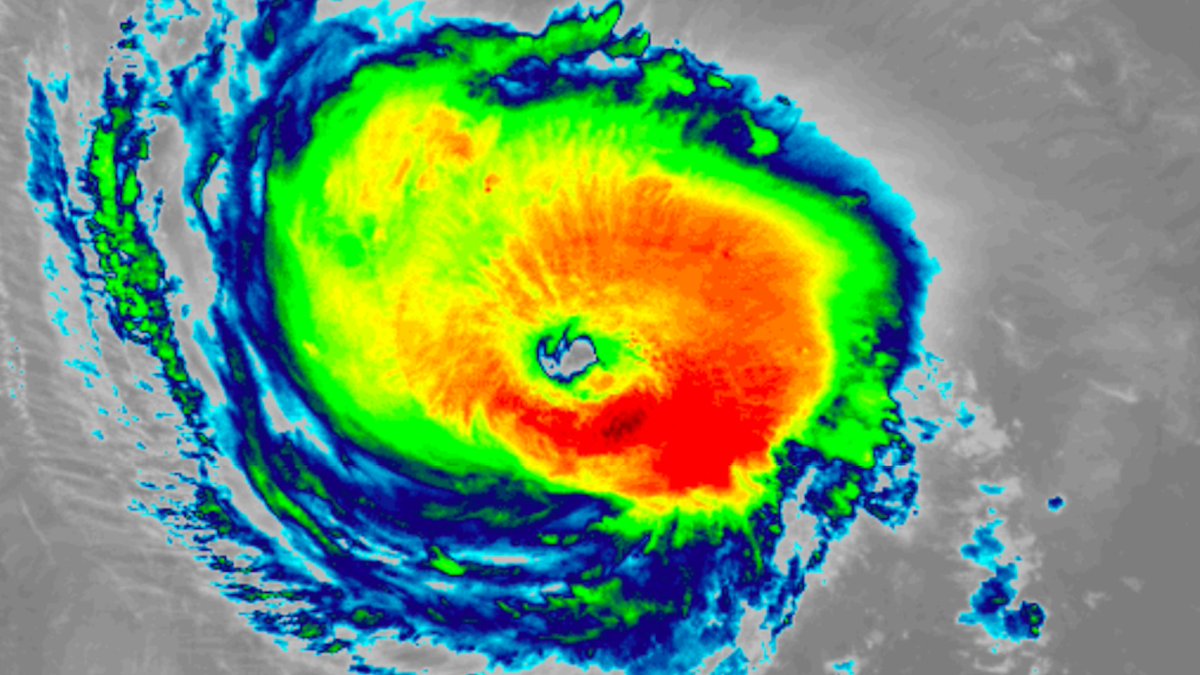 Hurricane Florence GFS model 10 day forecast 12 am EST. A strong high pressure ridge coming off the N East coast dips down behind Florence from a low pressure trough in the E Central Atlantic & steers Florence NW and then NNW, with a landfall of a CAT 4 hurricane at the Far 👇👇 pic.twitter.com/xQJqqDr36n

The right-wing media’s batshit crazy hurricane commentary has begun.
Rush Limbaugh on Hurricane Florence: “this is made to order for the climate change/global warming crowd … all to heighten the belief in climate change”

00 WED GFS operational run is trending slightly north with initial #HurricaneFlorence stab at the coast at near CAT 4 strength early Friday then retrogrades system southwest along coast much like that of the 18Z TUE model….another #ghastly but plausible solution. 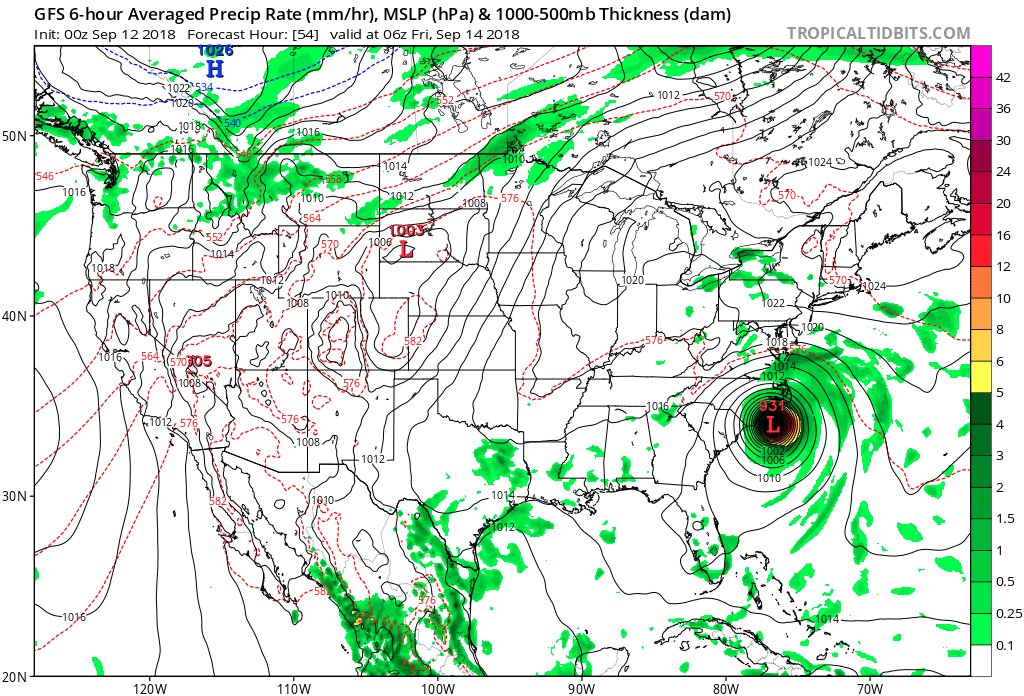 Information coming in after the 18Z Tuesday models from 9/11/2018 were processed: 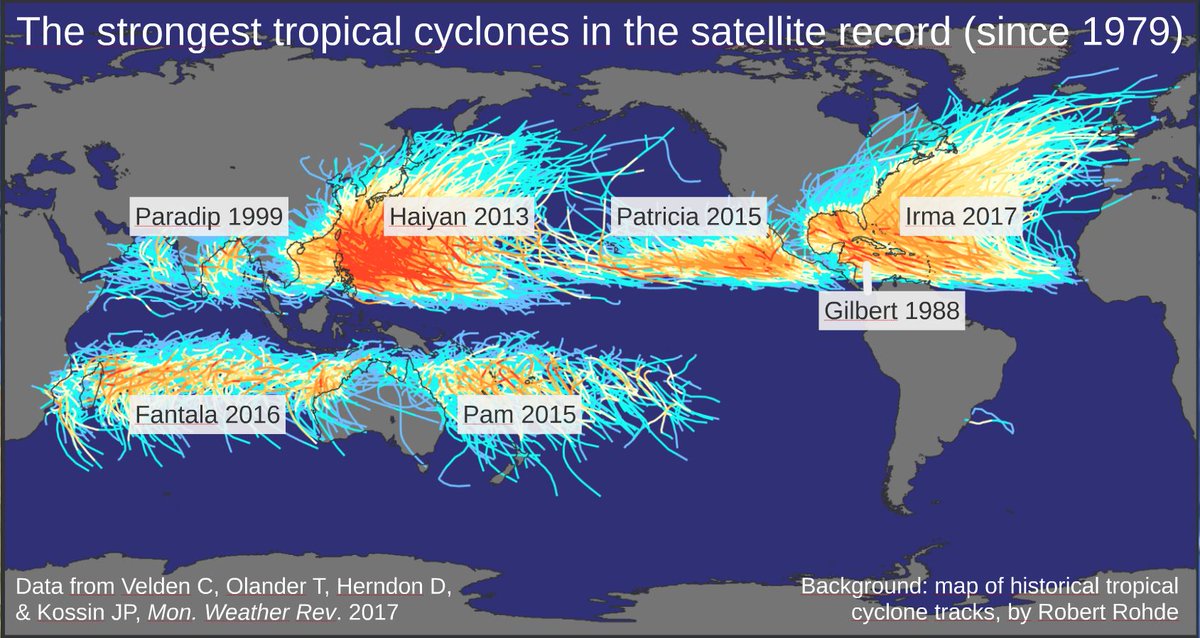 We have some new wrinkles in the forecast due to slower, meandering solutions from the 18Z run. Florence appears to be getting stronger as of this writing, so if it going to make a run at CAT 5 it will do it tonight. From the TUE afternoon NHC discussion:

“During the next 24 hours or so, Florence is expected to remain in a
very favorable environment consisting of low shear near 5 kt, an
expanding upper-level outflow pattern, and above-average SSTs of
29.0-29.5 deg C, which should result in additional strengthening.
By 48 h, the decreasing forward speed along with the large
inner-core wind field should induce some upwelling and gradual
weakening. Although the GFS- and ECMWF-based SHIPS intensity models
are indicating an increase in the southwesterly shear to near 20 kt,
this could be due to the SHIPS model capturing Florence’s own
strong outflow from the GFS and ECMWF model fields. Despite the
weakening shown at 72 hours, Florence is still expected to remain a
dangerous hurricane through landfall. After Florence moves inland,
the slow forward speed of less than 5 kt should cause a rapid spin
down and weakening of the hurricane’s circulation.”

Consider what it’ll be like if #Florence meanders near coast. Many hours to maybe DAYS of winds of tropical storm force or stronger, storm surge, and flooding rains will severely test one’s endurance, with power out lasting into the aftermath. More reason for plenty of supplies!

#GlobalWarming more like #GLOBALWARNING It is happening! It’s real
Get involved check 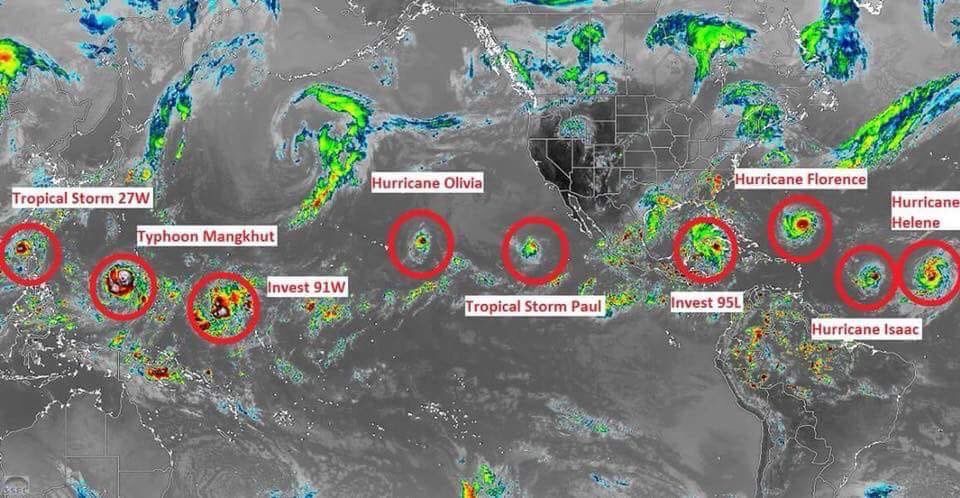 What will hurricanes look like in the future? It all depends on how we tackle climate change today http://bit.ly/2oATbYn  #Florence
4:37 PM – 11 Sep 2018

Barometric pressure readings have been kept in #Wilmington since 1871.  The lowest pressure ever measured here occurred in Hurricane Floyd back in 1999.  Could #Florence break this record? 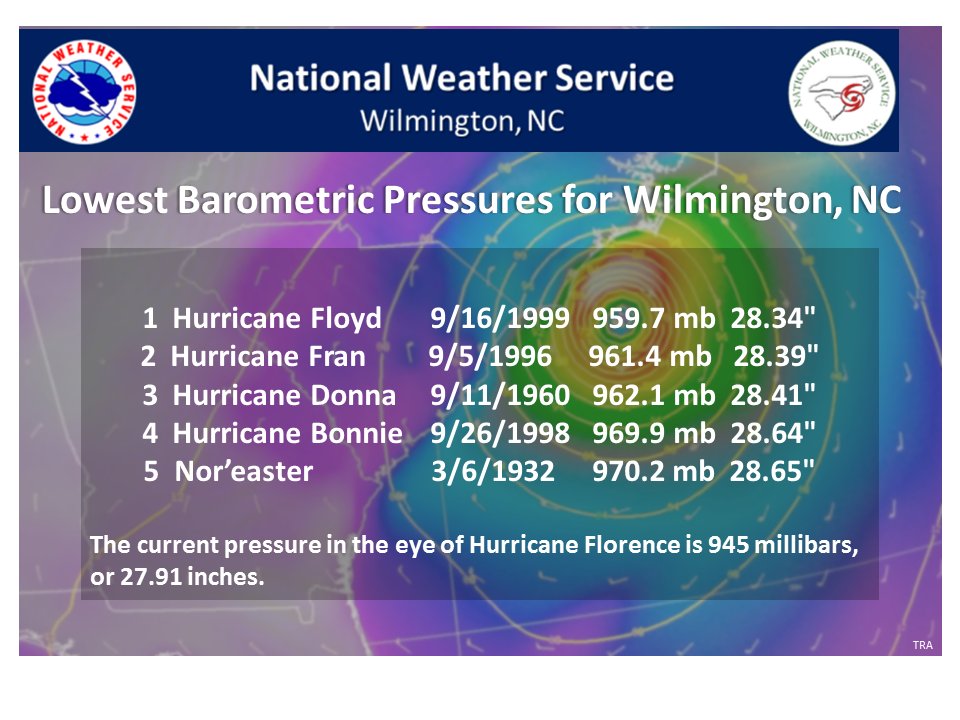 Where #Florence will head after reaching the Carolina coast is still up in the air—but titanic rainfall amounts are in the cards https://bit.ly/2N5h4Gd 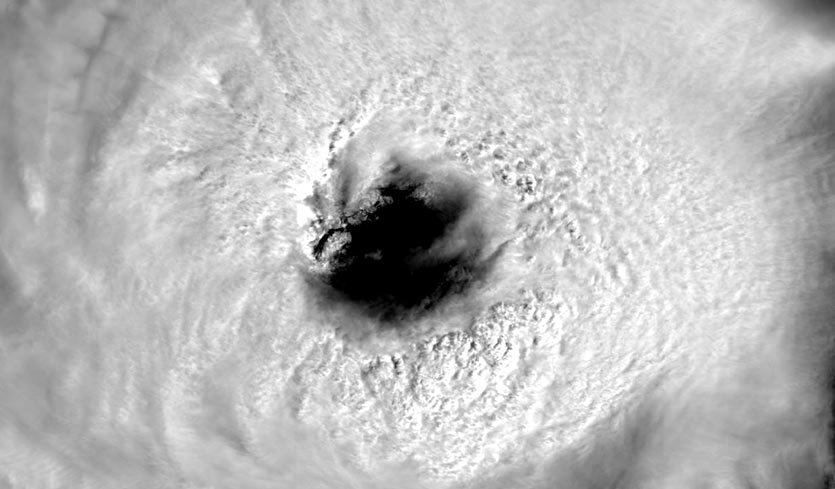 NWS WPC‏Verified account @NWSWPC
Life-threatening, catastrophic flash flooding and significant river flooding is likely over portions of the Carolinas and Mid-Atlantic states from late this week into early next week, as #Florence is expected to slow down as it approaches the coast and move inland. 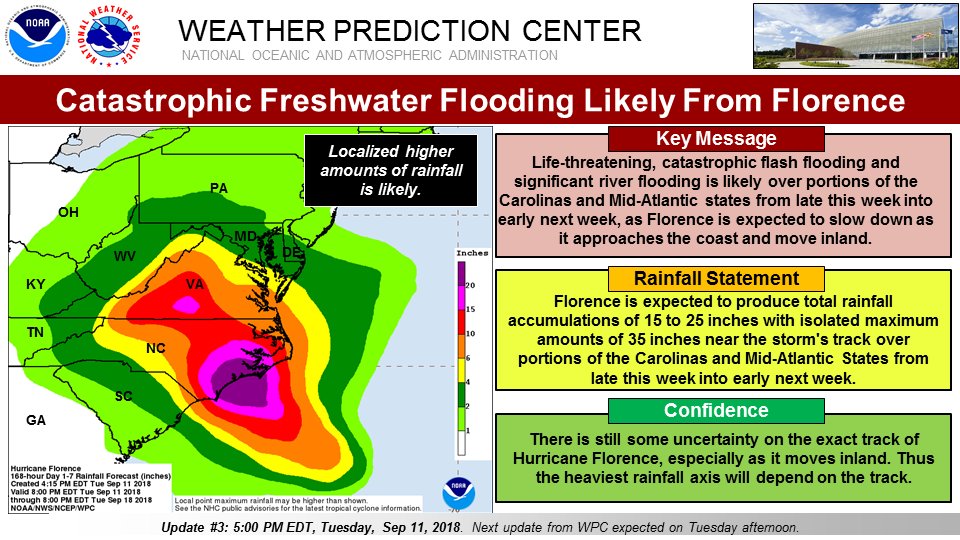 Exceptionally warm ocean surface temperatures are a necessary condition for the formation of extremely powerful hurricanes. 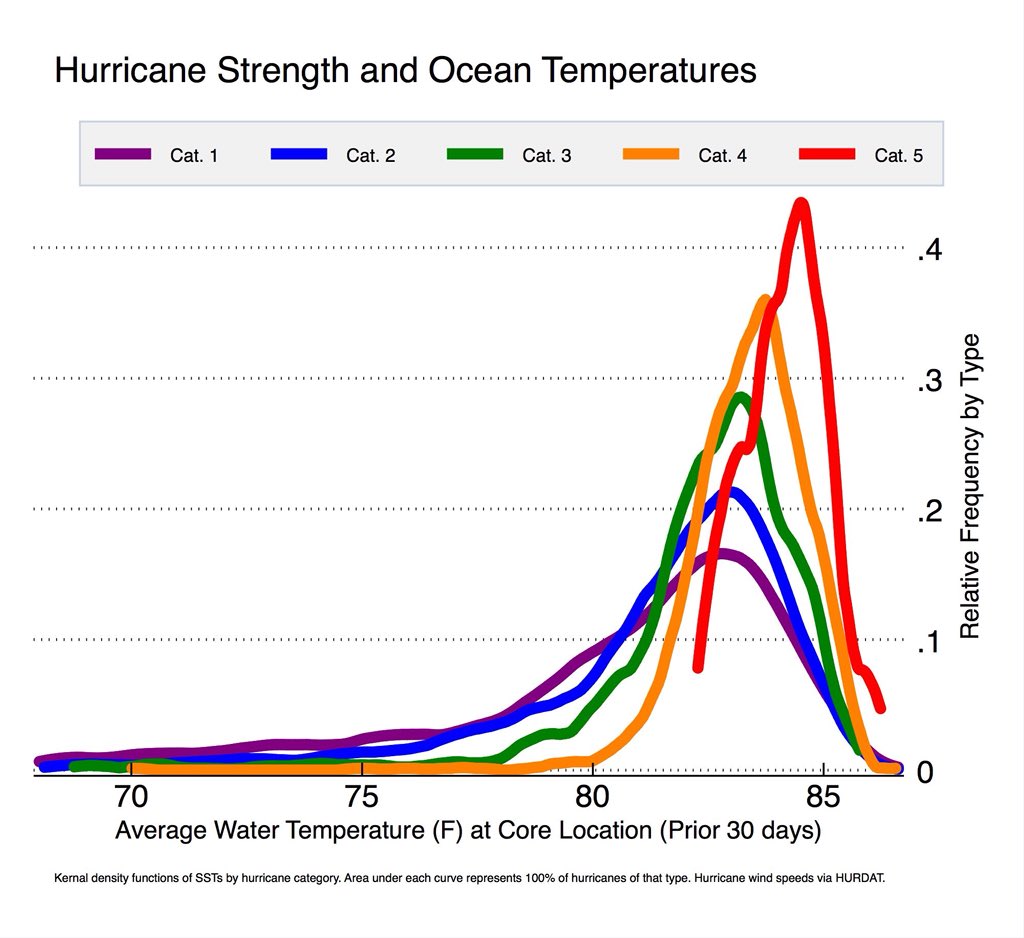 This is the new experimental version GFS model called FV3-GFS 10 day forecast 6 pm EST. High pressure building off Africa initial steers Florence to the WNW. A strong high pressure ridge coming off the N East coast dips down behind Florence from a low pressure trough in the👇👇 pic.twitter.com/vk8o5gOSD3

If anyone wants to read a more technical reason as to why there are differences between the EURO model and GFS please read through this Twitter thread:

1) Let’s reason out why the #GFS tracks #Florence NE of the #ECWMF even now 3 days till verification? Look at the upper-level cirrus canopy b/c cloud-radiative feedback is important.

With all of the mainstream media focused on Hurricane Florence, why won't meteorologists talk about the storm's link to climate change? More with climate scientist @MichaelEMann: https://t.co/9Cln6qZ1yn pic.twitter.com/JPNuC4c2w9

Latest 8 pm Advisory: The current forecast cone from the National Hurricane Center takes #Florence into the Carolina coastline as a major #hurricane overnight Thursday into Friday. 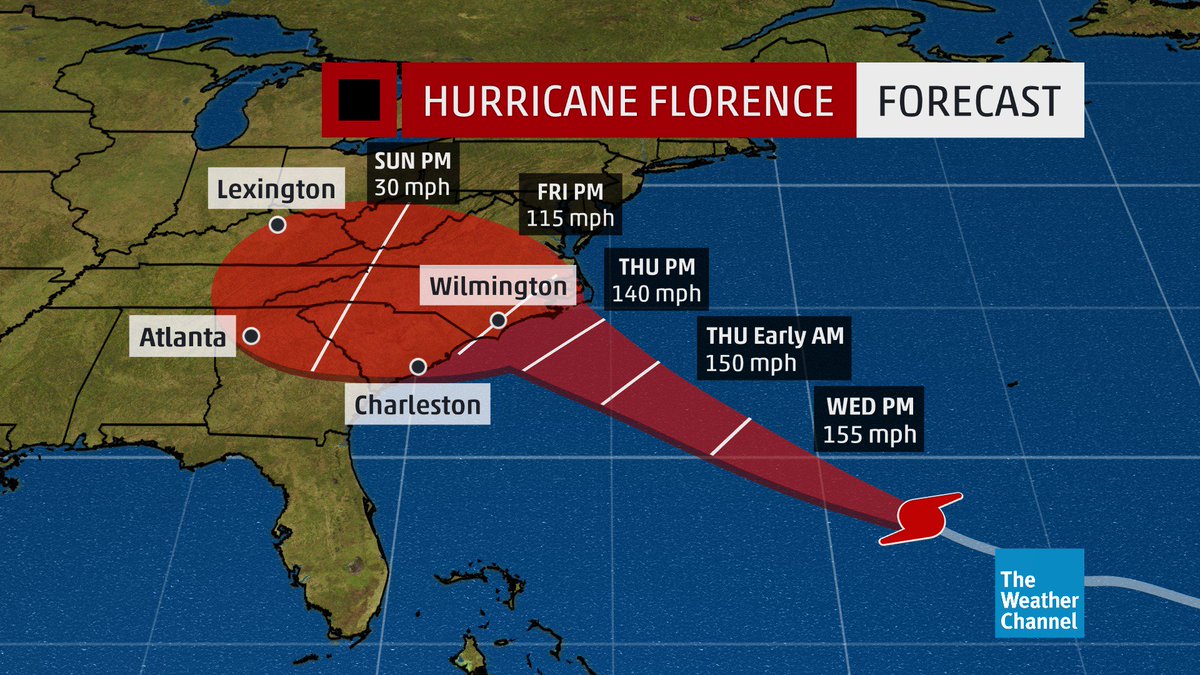 For those curious how NHC’s track forecasts have evolved for #Florence since it formed on August 31, here you go. This shows every 5-day forecast that has been made. The forecast tracks are colored by time; the black line/diamonds is the observed track so far.

Hurricane Florence GFS model 10 day forecast 6 pm EST. A strong high pressure ridge coming off the N East coast dips down behind Florence from a low pressure trough in the E Central Atlantic and steers Florence NW and then NNW, with a landfall of a CAT 4 hurricane at the Far 👇👇 pic.twitter.com/tO0SPldIjW

The 18Z operational GFS has a lot of new wrinkles forecasting an initial brush with land near Wilmington Friday afternoon then a long stall near shore, finally totally moving inland by late Sunday…a horrific solution for the Carolinas due to #HurricaneFlorence.

Information coming in after the 12Z Tuesday models from 9/11/2018 were processed: 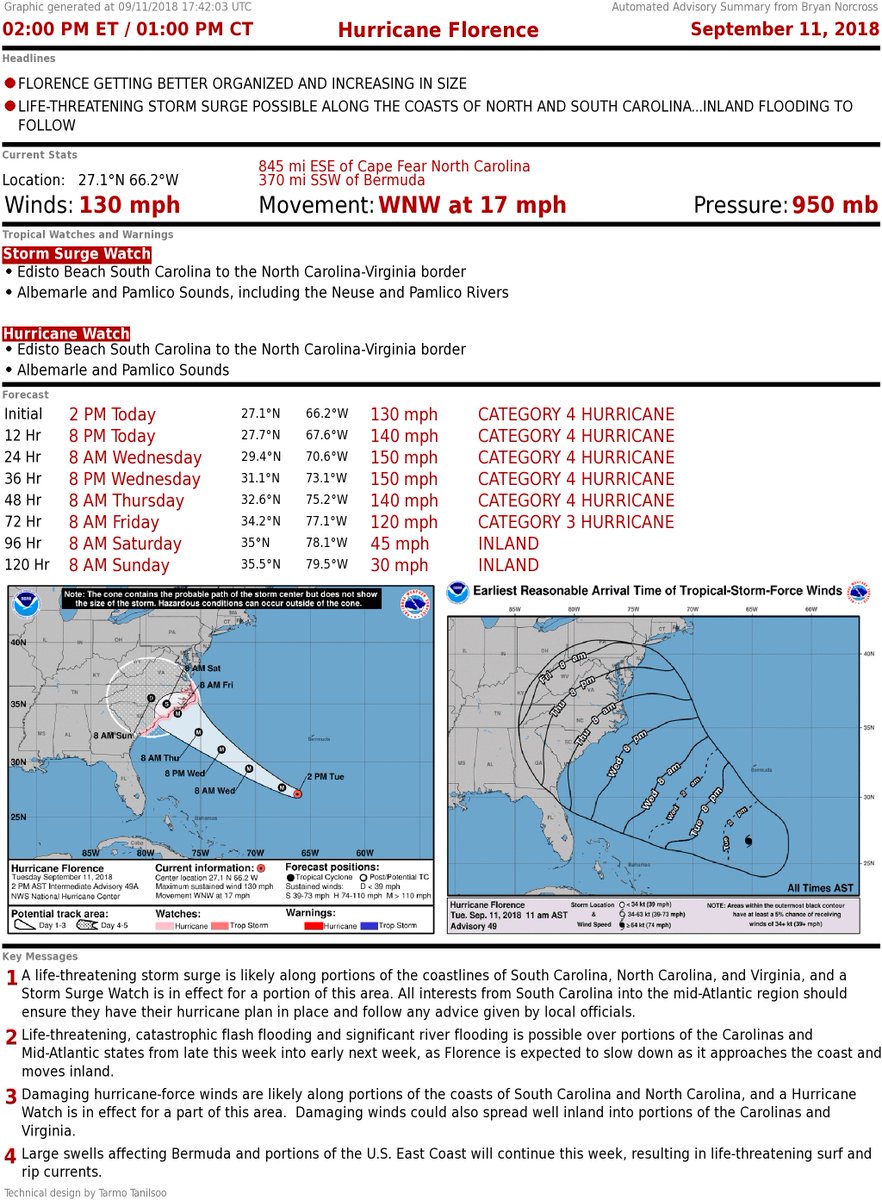 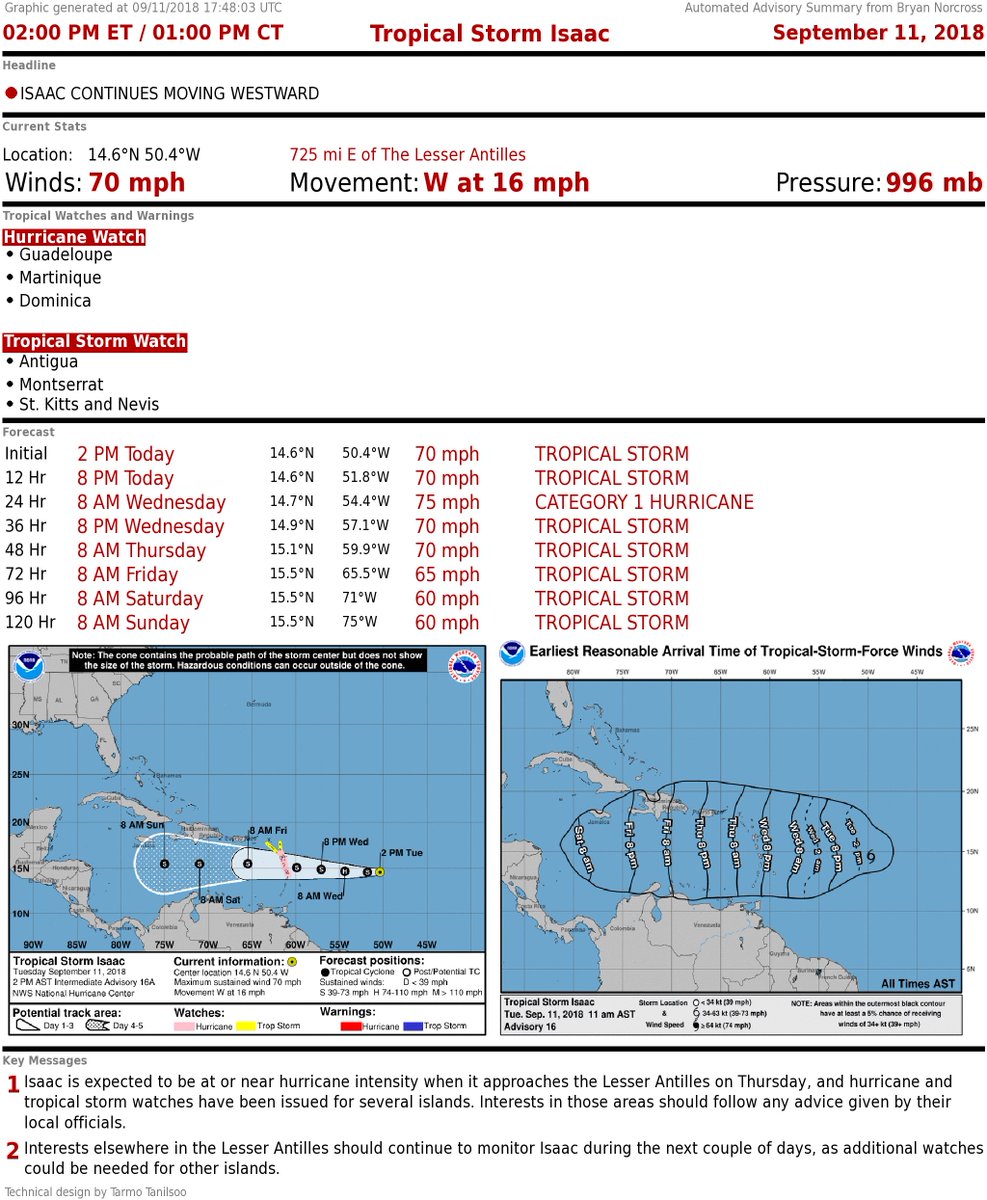 Insane Atlantic outlook graphic today. I’m afraid it is only going to get worse before it gets better!

A number of cities in the East have had one of their wettest years-to-date through Sep. 10, including Wilmington, NC, where it’s their wettest year-to-date in records dating to the 1870s. Almost 21 inches above average-to-date. And that’s before #Florence. (Map, data: @SERCC) 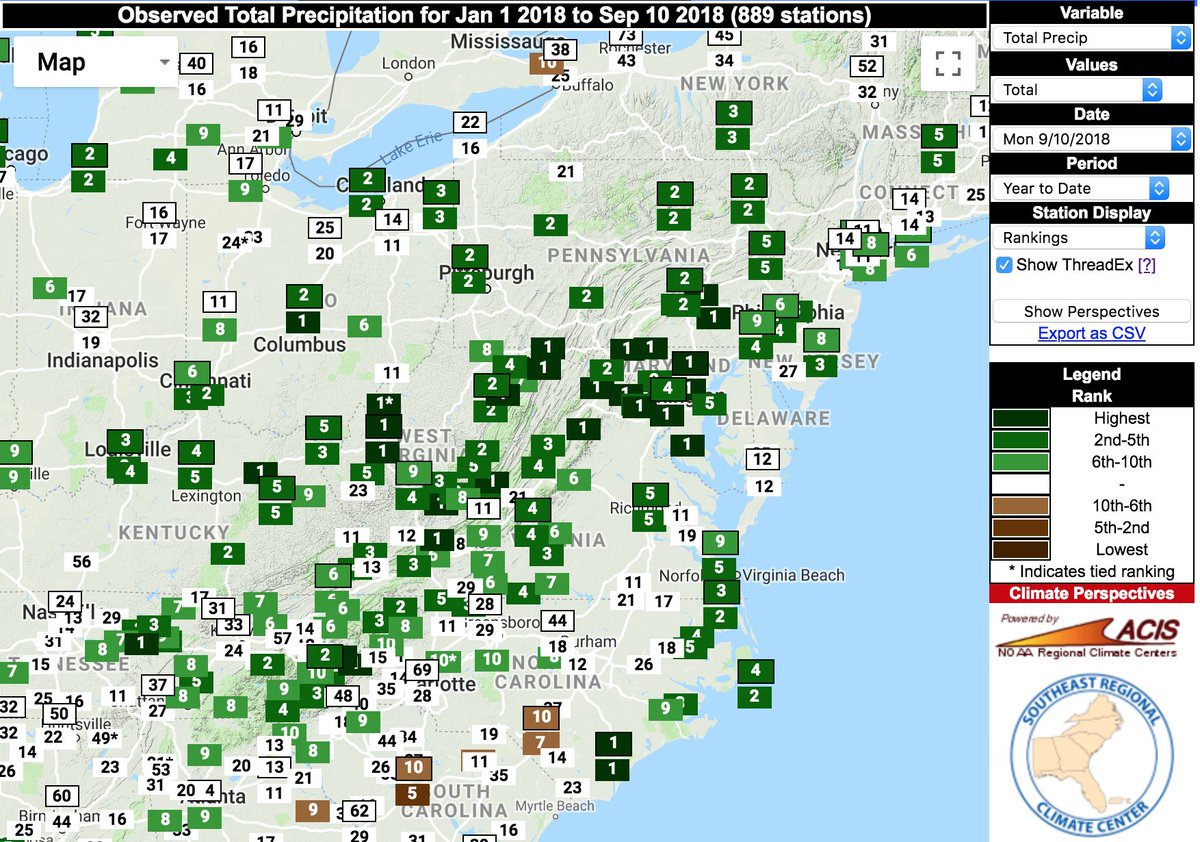 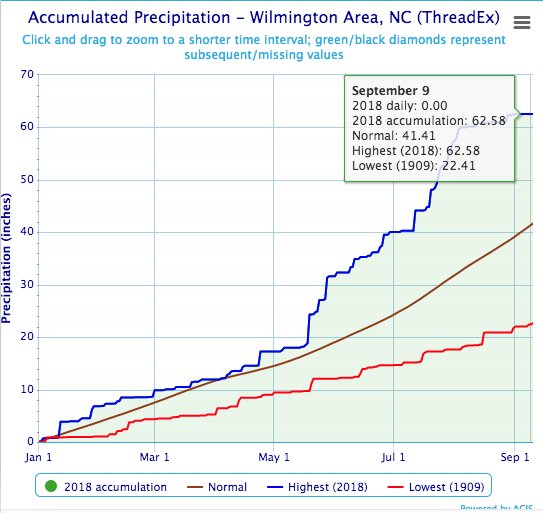 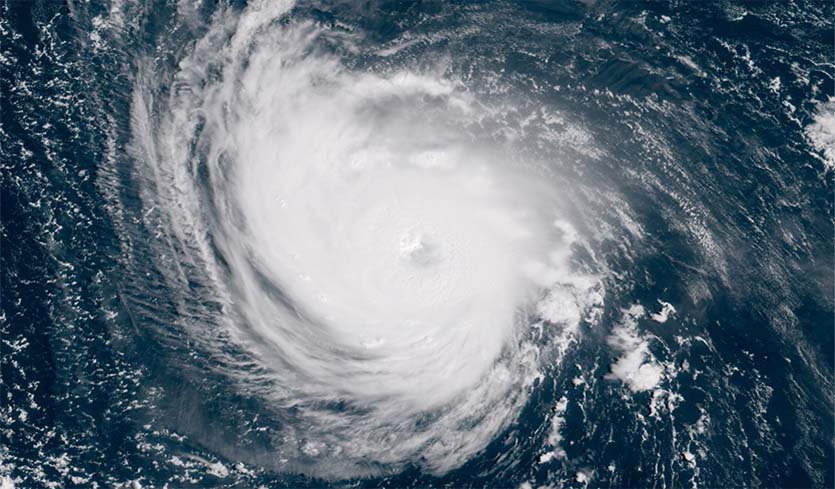 A Hurricane Watch is in effect for Edisto Beach SC to the North Carolina-Virginia border including Albemarle and Pamlico Sounds. Hurricane conditions are possible within the watch area by late Thursday or Thursday night, with tropical storm conditions possible by Thursday morning 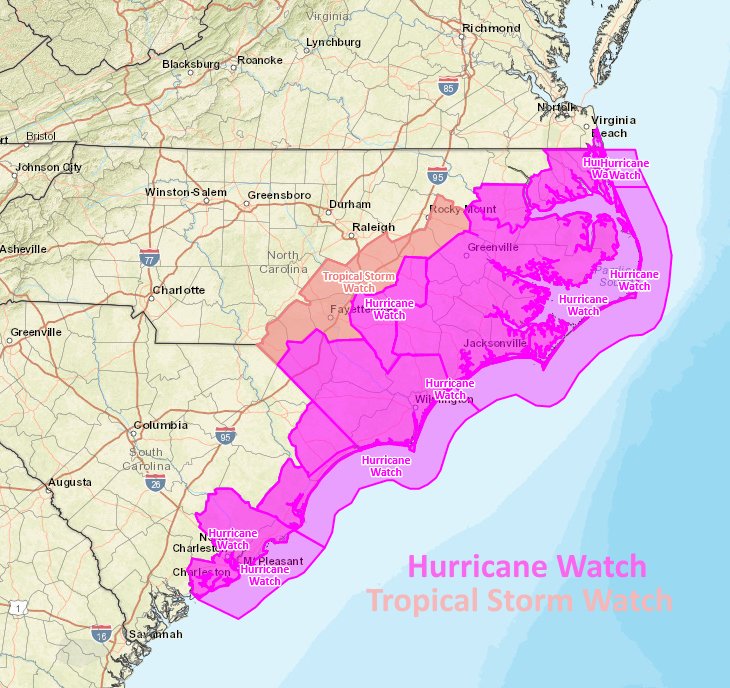 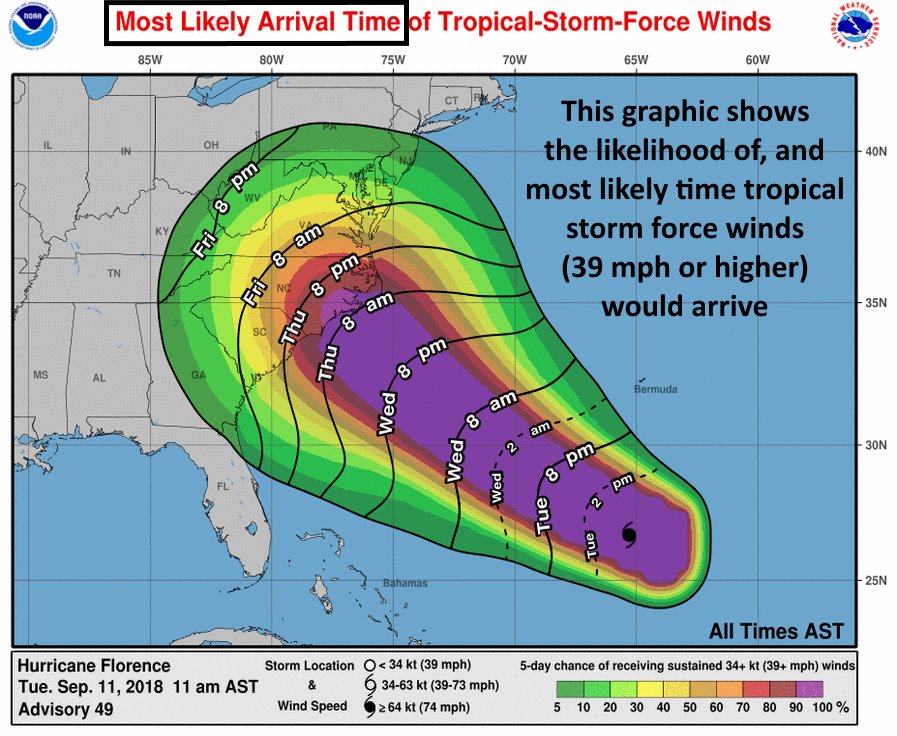 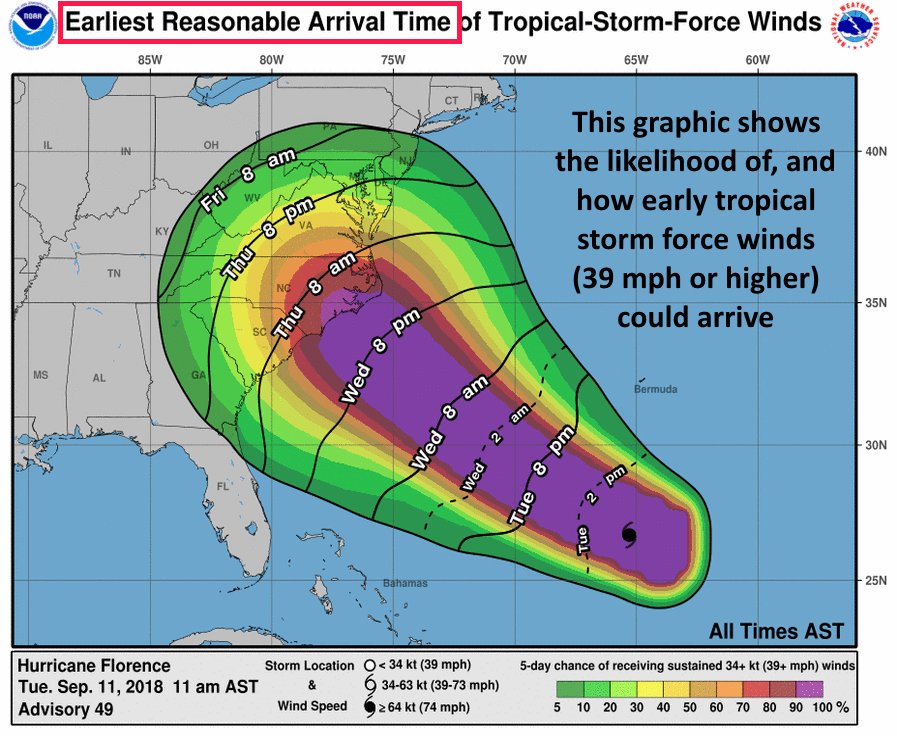 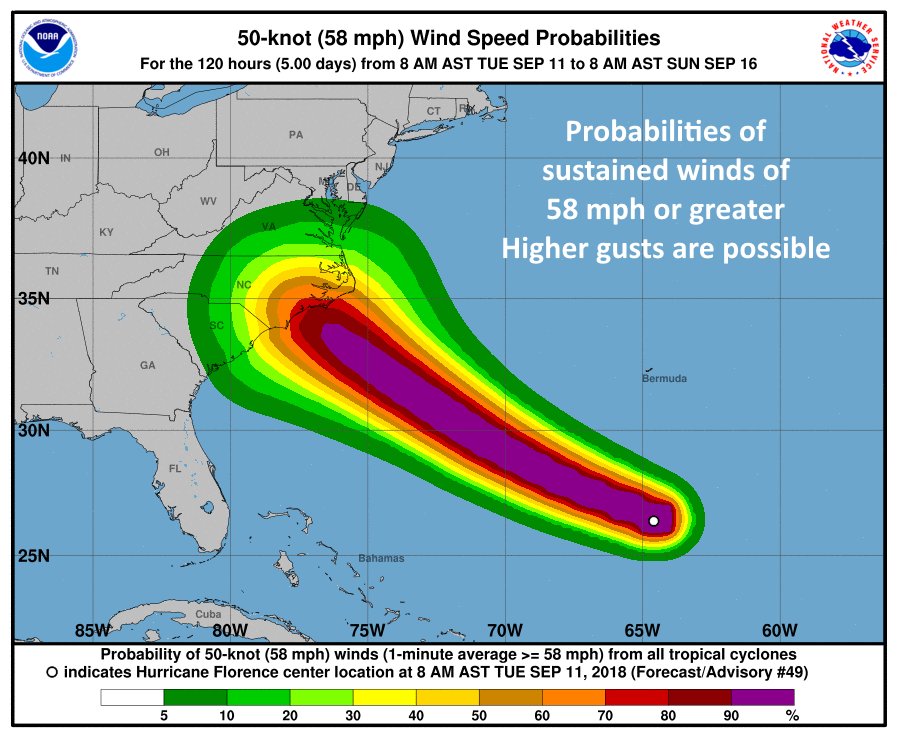 The operational 12Z TUE GFS, not surprisingly, has come in line with the EURO model with #HurricaneFlorence. A landfall late Thursday/early Friday near Wilmington is looking more likely as a CAT 3/4, then the system stalls in the Carolinas producing horrendous, historic flooding. 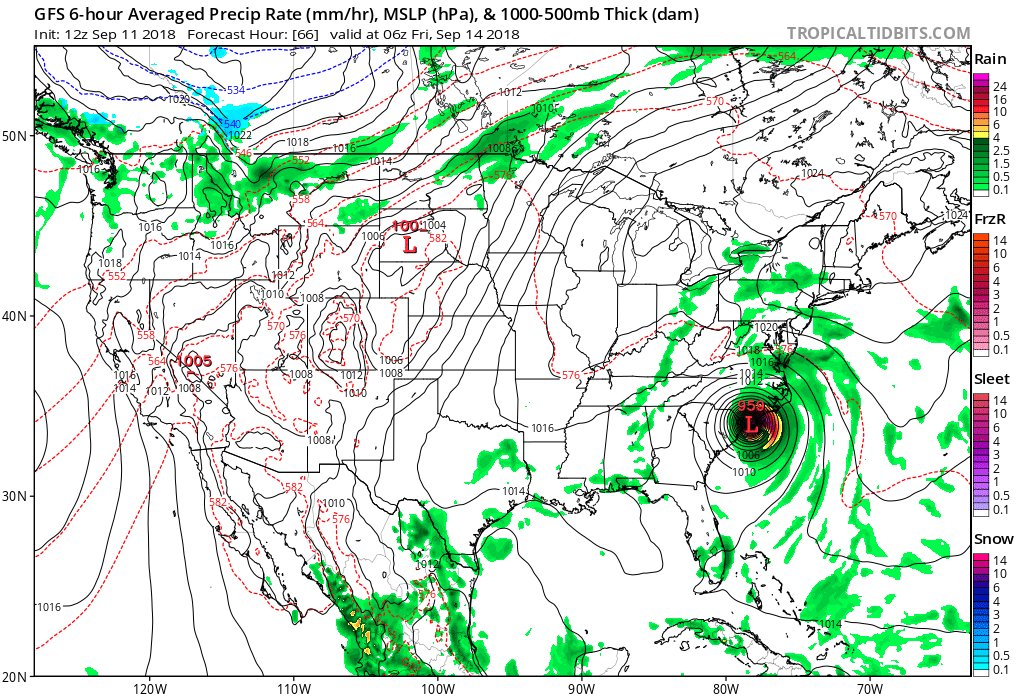 Information coming in after the 06Z Tuesday models from 9/11/2018 were processed:

#HurricaneFlorence has its sights set on the Carolinas, and if it hits as hard as predicted, the storm will be the most powerful to pound the area in three decades https://buff.ly/2x0DI8N  via @CNN 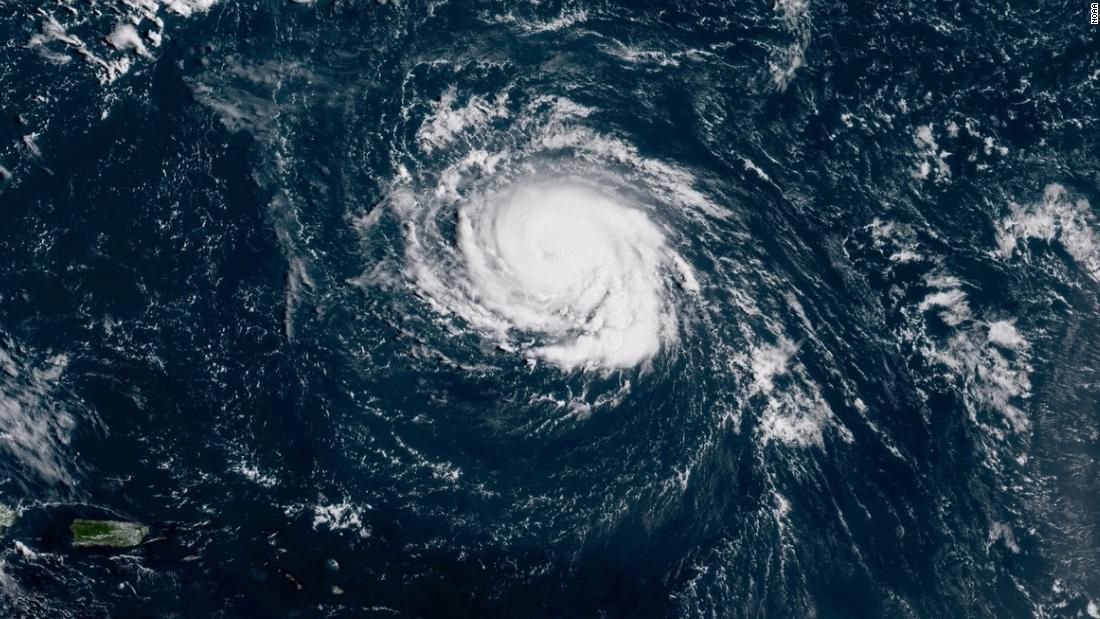 At 11 am Hurricane Florence is centered about 390 mi south of Bermuda or about 905 mi ESE of Cape Fear, NC. Florence has max winds of 130 mph and is moving to the WNW at 16 mph. Florence is forecast to slow down as it approaches the coast & stall inland over southern mid Atlantic 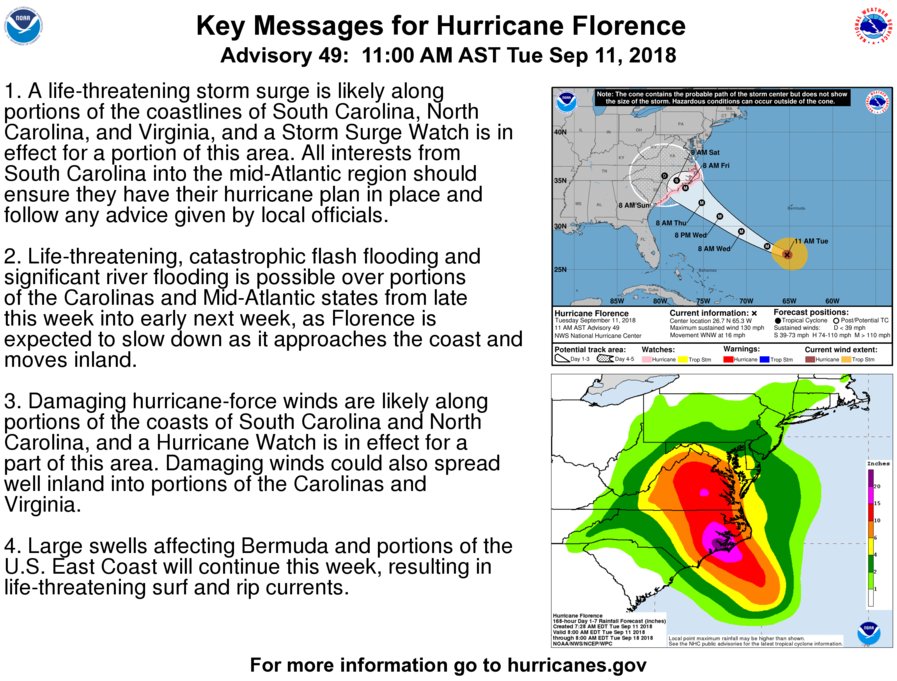 Time-lapse video of a #NOAA WP-3D Hurricane Hunter (#NOAA42) flight into Hurricane #Florence on Sept. 10, 2018. Get the latest on the storm at https://t.co/MlZk25kG0d. Credit: Nick Underwood/NOAA pic.twitter.com/FQ3RJMKVUU

Only four hurricanes on record have made landfalls as Cat 4s north of Florida. #Florence may become the fifth–and could be the strongest landfall on record so far north https://weather.com/safety/hurricane/news/2018-09-11-hurricane-florence-landfall-category-4 … 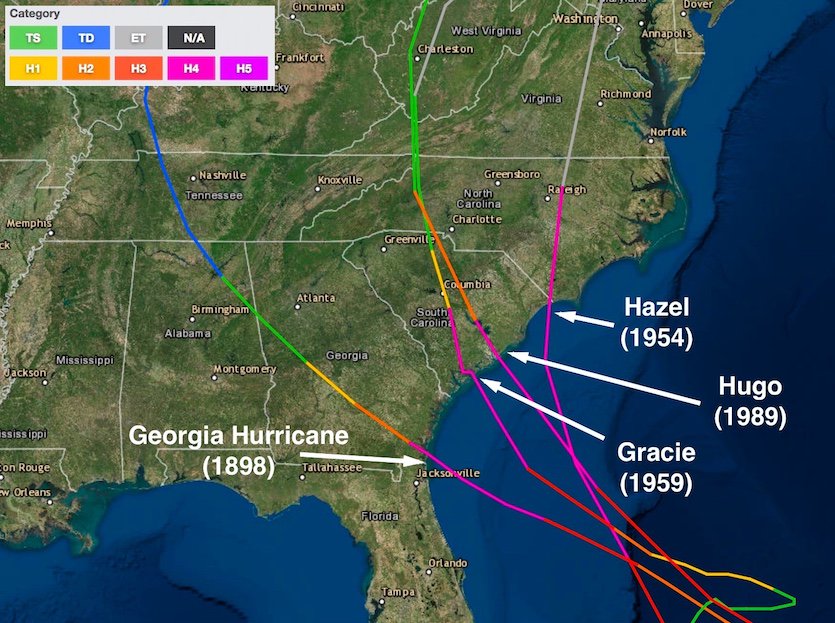 The operational 06Z TUE GFS is slower and stronger with #HurricaneFlorence than the 00Z TUE run. Most of the coast of North Carolina gets raked, then the system stalls in the Carolinas producing horrendous, historic rainfall if this model run is correct. 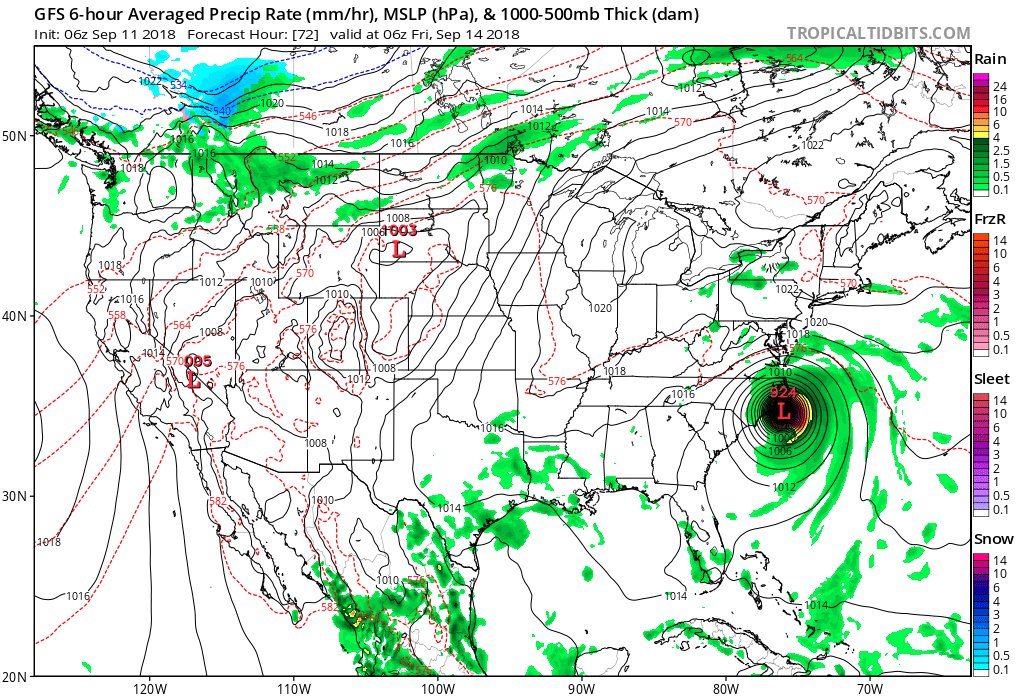