Going Back Down Under- More Southern Hemisphere Warnings

Australia’s eye opening summer continues into the new year. It’s gotten hot and I mean really hot across southern areas of the country the last couple of days:

Even in torrid Australia, 120°F is a scorcher. At the town of Tarcoola, it's the hottest ever observed in more than a century of recordkeeping. https://t.co/WxaYsXfH7t

My favorite French meteorologist has also noticed the latest round of heat to plague the country, reporting a couple of “ETs:”

The past 4 days are in Australia's top 10 warmest days on record—and the trend looks like continuing today. The nights have been warm too, which is what defines #heatwave conditions https://t.co/u6dbfmKPk6 Stay cool, check on loved ones & follow advice from health authorities pic.twitter.com/8Qisw9m4LM

Just how hot was it yesterday? 🌡️ On the left we can see SA's observed max temperatures for 15 Jan 2019, on the right we can see it was generally 10-14°C hotter than average. What a stinker! 😓 @SA_SES @CFSAlerts @SAHealth @SAPoliceNews #FeelingHot2019 https://t.co/vG1d8fQByz pic.twitter.com/v8CsLSsngw

From a world perspective today one of the warmest anomalies on the planet is from southeast Australia: 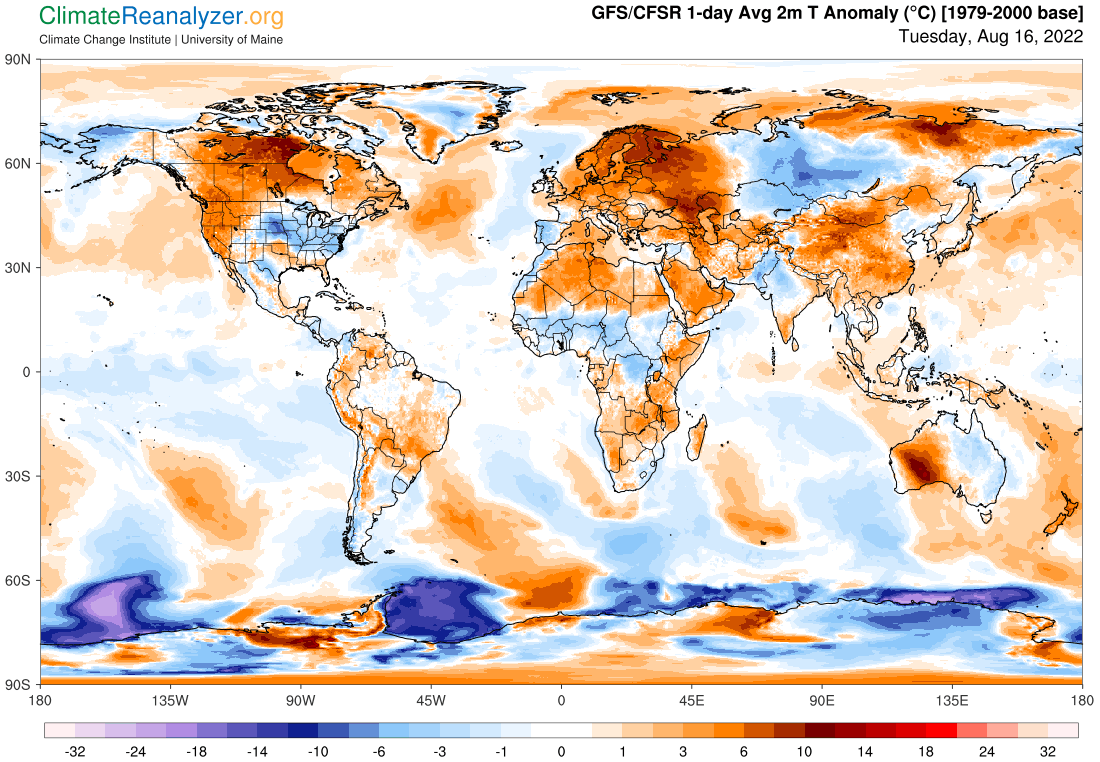 Here is what expert local forecasters are seeing this week for Australia. I highly recommend clicking on the video link:

Watch our latest Weather Update on YouTube at https://t.co/qd6ycekDHm re the heat intensifying over southern & central Australia this week. Video current at 1pm AEDT. Check warnings on our website; follow advice from emergency services. @ABCemergency pic.twitter.com/yISvcQ2lr7

"Depending on how old you are and how fast we keep warming up the planet you may see the vector of catastrophically rapid sea level rise, 4 meters per century scale." My contribution to @CBSNews https://t.co/sRb14itabR Thanks @ClimateCentral for sea level visual @johnenglander

In the “the longest-ever assessment” of Antarctica‘s ice mass, scientists are reporting a rapid increase in melting — a six-fold increase in yearly Antarctic ice mass loss between 1979 and 2017.

The study, published Monday in the Proceedings of the National Academy of Sciences, was a collaborative effort by glaciologists from the University of California, Irvine, NASA’s Jet Propulsion Laboratory and the Netherlands’ Utrecht University.

“We are on a path for rapid sea level rise in the coming one century or so” says lead author Eric Rignot.

The team was able to discern that between 1979 and 1990, Antarctica shed an average of 40 billion tons of ice mass annually. From 2009 to 2017, about 252 billion tons per year were lost. And the rate of ice melt has increased as well, by nearly three times.

Rignot warned, “Depending on how old you are and how fast we keep warming up the planet you may see the vector of catastrophically rapid sea level rise (4 meters per century scale).” A rise of 4 meters (about 12 feet) would be enough to put many coastal towns and cities underwater and submerge much of South Florida.

For now, the ice melt and corresponding sea-level rise remains at a manageable level. In the past 40 years, Antarctica’s contribution to global sea level rise has only been a half an inch. But that pace is increasing as the climate warms faster.

Traditionally the western side of Antarctica has been the biggest source of anxiety among scientists. But this study finds a vast quarter of eastern Antarctica is now becoming a bigger player and “is a great concern as well.”

“This region is probably more sensitive to climate change than has traditionally been assumed, and that’s important to know, because it holds even more ice than West Antarctica and the Antarctic Peninsula together,” said Rignot.

The more rapid melt is due to increased westerly winds forcing more warm, salty subsurface waters underneath the edges of the floating ice shelves due to a changing climate. The ice shelves act as an ocean-facing, protective barrier, keeping land-ice locked in place.

Seems like it was only a matter of time before someone paid attention to east Antarctica @AntarcticAnthro https://t.co/bMnXflG4qp

So, while most meteorologists are anticipating a change in the weather pattern leading to “true winter” across most of North America the next several days, it pays to remind all that this summer in the Southern Hemisphere is undergoing climate change signs, albeit at a slower pace than just one season across Antarctica. Despite shivering across Europe, the United States and Canada, heed these warnings.

Oh, and Dear Diary, here is some other big news concerning Antarctica from Wednesday:

Satellites have never seen as little sea ice surrounding Antarctica in early/mid January as we've had this year https://t.co/fccOmA09Zv pic.twitter.com/HB9qHTZJXp

Here is more climate and weather news from Tuesday:

(Very) wet week ahead across much of California. Extreme rain scenarios toned down a bit for SoCal, but widespread hvy rain still expected. And the "Warm West/Cool East" dipole rears its (ugly?) head in the long range: #CAwx #LArain #CAwater #CAfire https://t.co/bsU8RnGNJ3

Weekend East Coast Storm !!… A caveat about forecasting specific details or snow amounts well ahead of time…There are a number of smaller events this week that can have an effect on the weekend forecast. I address all of that ..https://t.co/ugMq6hHVLz pic.twitter.com/go5y08ZTtJ

Mt. Whitney, California's tallest mountain, is expected to get nearly 70" of snow in less than 72 hours #cawx pic.twitter.com/P5Ptz35WeA

"We fear the solutions more than we fear the impacts," @KHayhoe explains, but the impacts are real and Canadians are experiencing them more and more. ⚡️ We're working hard with Canadians to create cleaner solutions and build a better tomorrow. ☀️ pic.twitter.com/4aW298Ne2E

Cement is responsible for 8% of the world's CO2 emissions

If the cement industry were a country, it would be the third largest emitter in the world.

It contributes more CO2 than aviation fuel 2.5% and is not far behind the global agriculture business 12% https://t.co/M2LUp07fzS

Even as surface mining in the mountains of Appalachia has declined, what mining continues likely has an oversized impact on people and the environment, a 2018 study found. https://t.co/rdDt9DUUGg

“We are rapidly approaching the end of the age of #FossilFuels. All new energy infrastructure must be #Sustainable from now on if we are to avoid locking in commitments to emissions that would lead to the world exceeding the goals of the #ParisAgreement.”
https://t.co/PXgQUlEMGo

If you find the news about climate change distressing, imagine how climate scientists feel. Tonight on The Agenda, a conversation about the psychological toll of their research, with @MichaelEMann, @HoffmannMatt, @jasonthistle, Lise Van Susteren & @spaikin | Producer: @ebombicino pic.twitter.com/SX5Io04B4e