Dear Diary. Today is Halloween with an extra spooky full blue moon, no less. Unfortunately any little trick or treaters parents will need to take extra precaution against COVID-19. I’ll have more notes on that awful disease at the bottom of today’s post, as usual.

It’s become an annual thing at Climate Central to take a statistical look at temperature trends during different holidays. Today I’m posting their results concerning Halloween. These should scare all of us (pun intended) into action to limit the use of fossil fuels and transition rapidly to green renewables for our energy sources:

In the spirit of Halloween, Climate Central reports some spooky statistics on Halloween extremes, warming October nights, and how climate change is impacting our favorite fall pastimes like pumpkin picking and trick-or-treating. 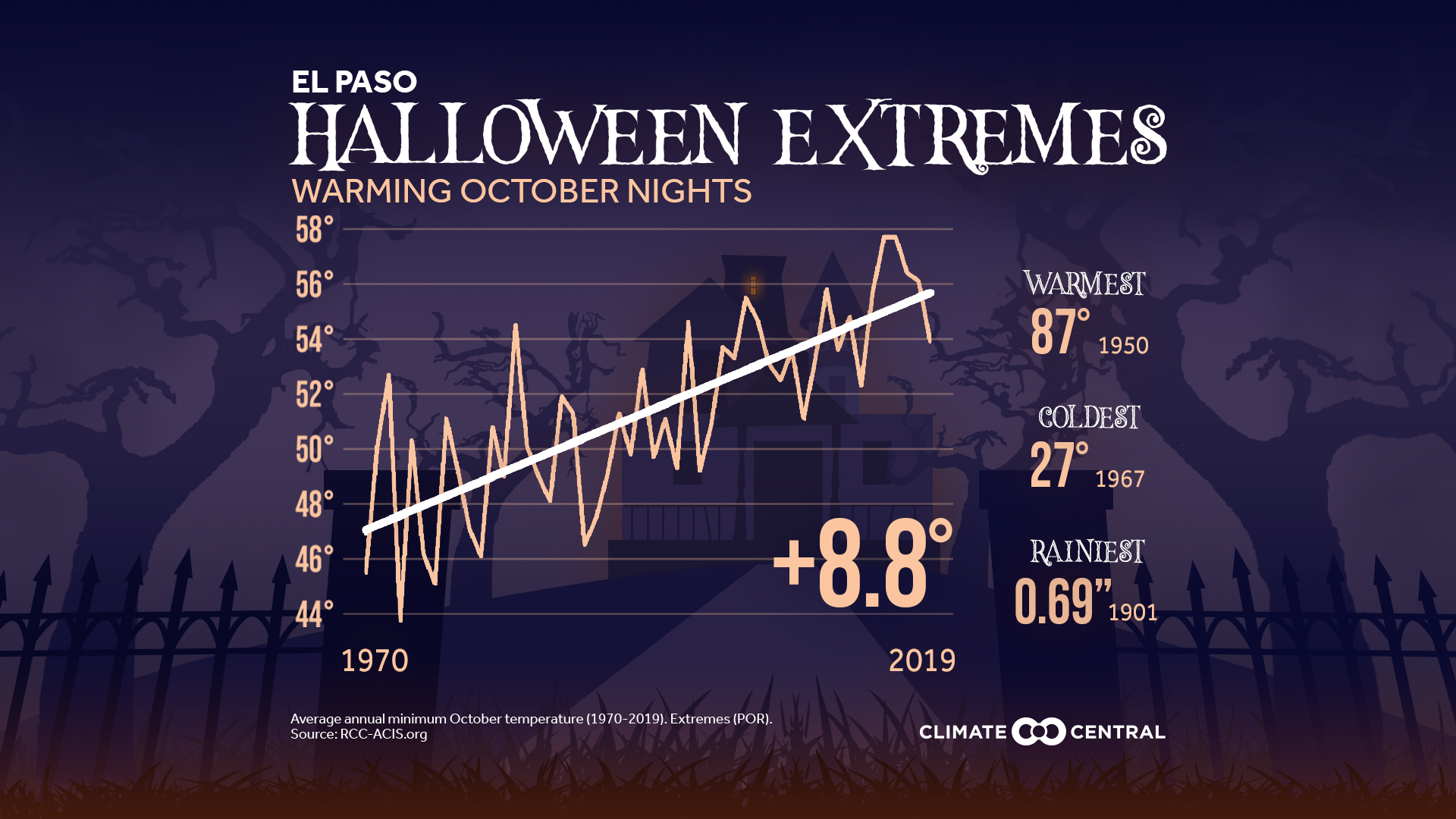 With an ongoing pandemic, 2020 has already been a frightful year for most. But as Halloween approaches, more than 148 million still plan to indulge in their spooky traditions amidst Covid-19. Nevertheless as many dress up as witches, vampires, and ghosts, we must remain vigilant of another monster lurking in the shadows—climate change.

In the spirit of Halloween, Climate Central examined Halloween extremes by reporting the coldest, warmest, rainiest, and snowiest October 31sts’ on record for 242 cities. In addition, we analyzed minimum temperature trends in the month of October from 1970 to 2019, which unearthed some spooky statistics. Of the 242 cities analyzed, 88% (212) experienced an increase in their average nightly October temperatures. The greatest increases reported were in Reno, Nev. (+11.6°F), El Paso, TX (+8.8°F), Las Vegas (+8.7°F), and Panama City, Fla. (+8.7°F).

The warming trend of October nights reflects the overall warming trend of the fall season. These trends, largely caused by human-induced climate change, have many implications, including an extended allergy season and a longer disease-carrying mosquito and tick season.

Climate change can also put a damper on Halloween and other festive fall activities. Pumpkins, traditionally picked and carved for Halloween, are at a potential risk. As global temperatures increase, some regions in the U.S. (e.g., Northeast and Midwest) will experience wetter conditions, on average, that produce lower quality pumpkins and make them more susceptible to diseases. A foreshadowing of this happened in Morton, Ill., where above-average precipitation in 2015 rotted their harvest, resulting in a nationwide pumpkin shortage.

And, unfortunately, the news does not get any sweeter for Halloween. Chocolate, a fan-favorite in trick-or-treat bags, is also threatened by climate change. Research indicates that El Niño-related droughts, which could become longer and more frequent under climate change, could significantly decrease cocoa bean production in Brazil. Also, areas of West Africa—that has about 70% of the world’s cacao trees—could lose up to 40% of their suitability for cacao trees by 2050. Some chocolate companies have already taken action, like pledging to source their chocolate sustainably. However, the strongest solution proposed is cutting company emissions because reducing greenhouse gases is our best bet at defeating the monster that is climate change.

How are fall harvests in your state affected by climate change?
Due to climate change-strengthened droughts, precipitation, and extreme weather, agricultural productivity is expected to decrease in some regions. Check out crop conditions and progression on the U.S. Department of Agriculture website, which reports weekly fall harvest progress for each state.

How are farmers in your area preparing for the negative impacts of climate change?
The USDA released a comprehensive report on climate change and agriculture in the U.S., highlighting the effects and adaptations. For more region-specific management plans and reports by farmers and farming communities, check out the USDA Climate Hubs webpage.

To get in touch with your local farmers on the impact of climate change and harvests, check out the directories provided by the USDA. The SciLine service, 500 Women Scientists or the press offices of local universities may be able to connect you with local scientists who have expertise on climate change and crop production in your area. In addition, the American Association of State Climatologists is a professional scientific organization composed of all state climatologists.

Climate extremes for October 31st and average minimum temperatures for the month of October were calculated using temperature and precipitation data from the Applied Climate Information System. Average minimum temperatures were analyzed from 1970 to 2019 while climate extremes were investigated over each station’s entire period of record. Climate Central’s local analyses include 244 stations. However, for data summaries based on linear trends, only 242 stations are included due to large data gaps in St. Johnsbury, Vt. and Wheeling, W. Va.