Main Topic: Storms Like Ida And Sandy Now Have The Northeast On Constant Edge

Dear Diary. Back in 2012 after Sandy made landfall I thought that people would proverbially be up in arms, demanding change away from fossil fuels due to climate change. In the years since sadly widespread demand for change did not occur in the United States, with only cries coming mainly from those directly affected by Sandy in the Northeast. Now, after horrific flooding from Ida and widespread western drought and fires, the climate crisis is part of just about every newscast.

Will coverage and interest diminish with time if there is a lull in between big climate crisis weather events? We will see. Already, though, there are signs of more trouble this week due to a new western heatwave. Meteorological models also indicate that we will see a weather pattern aloft that resembles what we typically see in August rather than mid-September in the East and South, so I’m afraid that there will be more tropical trouble going into fall.

For today’s main subject here is a CNN article written last week on the effects from Ida. As stated on this blog, am hoping that the awful climate crisis events from last week will be the impetus to push Joe Biden’s Build Back Better plan over the finish line:

(CNN) After Hurricane Ida battered the southern US states, its remnants lashed the northeast on Wednesday night, transforming New York City into a danger zone Thursday morning. Ida dumped heavy amounts of rain on Central Park and the subway was inundated with fast-moving floods, knocking nearly the whole system out of operation. The neighboring city of Newark, New Jersey, saw the heaviest single day of rain on record.

These are the kinds of scenes that scientists say the world will see more of because of human-caused climate change.

Officials in New York appeared totally caught off guard by the floods. Meteorologists — who knew storms and floods were on their way, even roughly how much rain would fall — were also surprised at the storm’s pace.

“It’s dangerous. We’re seeing a kind of rainfall — we almost never see this kind of speed with which the rain has come,” New York City Mayor Bill de Blasio said, urgently calling on everyone to stay at home.

New York Governor Kathy Hochul said she could not guarantee responders could rescue people that may be stuck in their cars “if it starts floating away like a boat on a river.”

Eight people have already died in New York and New Jersey, which are both under a state of emergency.

“What is so surprising is the time span of the rainfall and the area impacted,” said CNN Weather’s Michael Guy.

“It is such a large area across the northeast, and it only happened within a span of a few hours. That’s nothing that we have seen, especially in this region of the country.”

Like with several weather events over the summer across the Northern Hemisphere, Ida has smashed records in some areas by a huge margin.

Wednesday was the rainiest day on record for Newark, New Jersey, which saw 8.41 inches of rain recorded. That’s nearly 25% above the previous record, set in 1977.

In New York City, more rain fell in a single hour (3.15 inches) than at any point in the city’s weather records, which go back to the 1800s. New York’s Central Park recorded 7.13 inches of rain, nearly doubling the previous record set in 1927 for the same date, the National Weather Service New York reported.

The stadium for the Somerset Patriots, a minor-league baseball team in Bridgewater Township, New Jersey, is partially flooded by overflow from the Raritan River on Thursday, September 2.

A man wades through floodwaters in Manville, New Jersey, on September 2.

Commuters walk into a flooded subway station in New York City on September 2.

A building in Queens, New York, is damaged on September 2.

A person walks in floodwaters in Philadelphia on September 2.

A United Automatic Fire Sprinkler employee helps clean up on September 2 after the business flooded in Woodland Park, New Jersey.

A motorist drives on a flooded expressway in Brooklyn, New York, early on September 2, as the remnants of Hurricane Ida swept through the area.

People stand inside a subway station in New York City as water runs past their feet on Wednesday, September 1.

Members of the New York City Fire Department rescue a woman from her stalled car on September 1.

Members of the Weldon Fire Company walk through floodwaters in Dresher, Pennsylvania, on September 1.

Workers clear a road from flooding in Bridgeville, Pennsylvania, on September 1.

A downed tree blocks a road in Plymouth Meeting, Pennsylvania, on September 1.

A tennis fan covers herself from rain as she attends a match at the US Open in New York on September 1.

A second-round singles match between Kevin Anderson and Diego Schwartzman was halted early in the second set as water came through multiple openings of the roof on Louis Armstrong Stadium. The match was moved to the Arthur Ashe Stadium and completed just after 1 a.m. Thursday.

Members of the Oakdale Fire Department clear debris from their station after heavy rains in Oakdale, Pennsylvania, on September 1.

Raindrops are illuminated by a camera flash near the US Capitol as Ida’s remnants pass over Washington, DC, on September 1.

A worker surveys damage in Annapolis, Maryland, on September 1.

Debris litters a park in Oakdale, Pennsylvania, on September 1.

A man walks his dog in Camp Hill, Pennsylvania, on September 1.

A house sits above floodwaters in Glenshaw, Pennsylvania, on September 1.

Water is pumped from the basement of a business in Oakdale, Pennsylvania, during cleanup on September 1.

What’s the role of climate change?

Globally, extreme rainfall events — including those in Germany and China in recent months — are becoming more common because of human-caused global warming, scientists say.

A recent UN climate report said that “the frequency and intensity of heavy precipitation events have increased since the 1950s over most land area.”

Related Article: It’s not your imagination. Weather and climate disasters have been getting more frequent since the ’70s

Across continental US, specifically, the heaviest downpours have been observed to be increasing in all regions, with the northeast showing the largest increase, according to the US National Climate Assessment.”

Warmer air can contain more water vapor than cooler air. Global analyses show that the amount of water vapor in the atmosphere has in fact increased over both land and oceans,” the report says.

In terms of hurricanes, climate change is making them more dangerous. They are producing more rainfall, moving slower once they make landfall and generating larger storm surges along the coast. Hurricane Ida was a prime example of those changes, and scientists say storms like this will become more common as the planet warms.

Scientists are now able to analyze exactly how much of a role climate change is likely to have played in a particular weather event. It’s too early to make such an estimate for Ida, but trends in hurricanes of this force suggest a link. 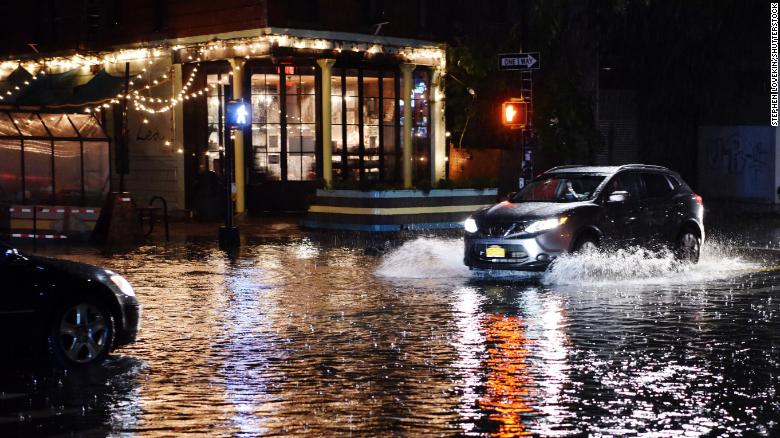 “What we can say, without doing a dedicated attribution study, is that major hurricane occurrences (categories 3-5) have increased in recent decades, which cannot be explained by natural variability alone,” Friederike Otto, who co-leads the World Weather Attribution initiative, told CNN in an email.

“Specifically, from event attribution, we do note that when hurricanes occur, the rainfall associated with them is more intense because of human-induced climate change, and Ida will not be an exception.

“While there is less certainty about the impacts of climate change on wind speed and some other factors, there is high confidence that the translation speed — how fast the whole system moves — of hurricanes has slowed, Otto said.

“This is important as it means the cyclones hang around for longer and thus can also cause more damage.”

What can we do?

Climatologist Kim Cobb, director of the Global Change Program at the Georgia Institute of Technology, warned that New York, like many cities, was clearly not prepared to deal with climate-related and weather disasters such as Storm Ida.

Related article: Earth is warming faster than previously thought, scientists say, and the window is closing to avoid catastrophic outcomes

“I don’t think that what we’re seeing today is emblematic of a climate-ready city in New York and, obviously, we have a story coming out from cities across the world — from communities out west grappling with wildfires that are linked to climate change,” Cobb told CNN.”

We’re just coming out of Ida’s devastation across the southeast US — Louisiana and Mississippi — infrastructure that is not ready for our climate of now, let alone the climate of tomorrow. These kinds of climate impacts are going to worsen with each additional increment of warming.

“On an individual level, the US government advises people to find safe shelter immediately in the event of a flood, and to refrain from walking, swimming or driving through flood waters. Authorities in the northeast are urging people to stay off the streets.

A landmark climate science report by the UN’s Intergovernmental Panel for Climate Change published in August, of which Cobb was a lead author, found that global warming was happening faster than scientists had previously thought. The report laid out a robust scientific argument for reaching net zero — where the world emits no more greenhouse gases than it removes — by 2050.

That would require deep cuts to greenhouse gas emissions and for the world to wean off unabated fossil fuels.

Reaching net zero by 2050 could contain average global temperature rise to 1.5 degrees Celsius above pre-industrial levels, which scientists say would stave off some of the more catastrophic climate change impacts than the world if currently experiencing. Warming is already at around 1.2 degrees C.

CNN’s Brandon Miller and Rachel Ramirez contributed to this report.

Here are some “ET’s” from Labor Day:

Here is some more August 2021 climatology:

Here is more climate and weather news from Monday: