Main Topic: A Reminder of What an American Historic CAT5 Heatwave Did

Dear Diary. No doubt, this summer has been a well above season, temperature wise, for most of the United States, in keeping with what we should expect because of climate change. August looks very hot going well into this month looking at meteorological models. Record temperatures have been broken from coast to coast, but using my criteria we only had one heatwave, so far, that barely nudged into my “historic” CAT4 territory. Yes, heatwaves have occurred across the United States since before settlers began to arrive in North America, and we have seen mega life ending heatwaves. Climate change is making these episodes more common and worse, but perhaps we will avoid another CAT5 this year. As a reminder, we had a CAT5 “Heatwave Beta” during June of 2021 across the Pacific Northwest that killed hundreds but was localized occurring only across Washington, Oregon and British Columbia. In Europe CAT5 “Smaug” has killed hundreds during 2022 and sent temperatures as high as 104°F in Britain.

So, what did a widespread historic CAT5 heatwave do across the United States, in particular before the age of air conditioning? Here is a Salon article that details one from the very hot Dustbowl decade of the 1930’s:

86 years ago, a heat wave battered the United States. This is what happened 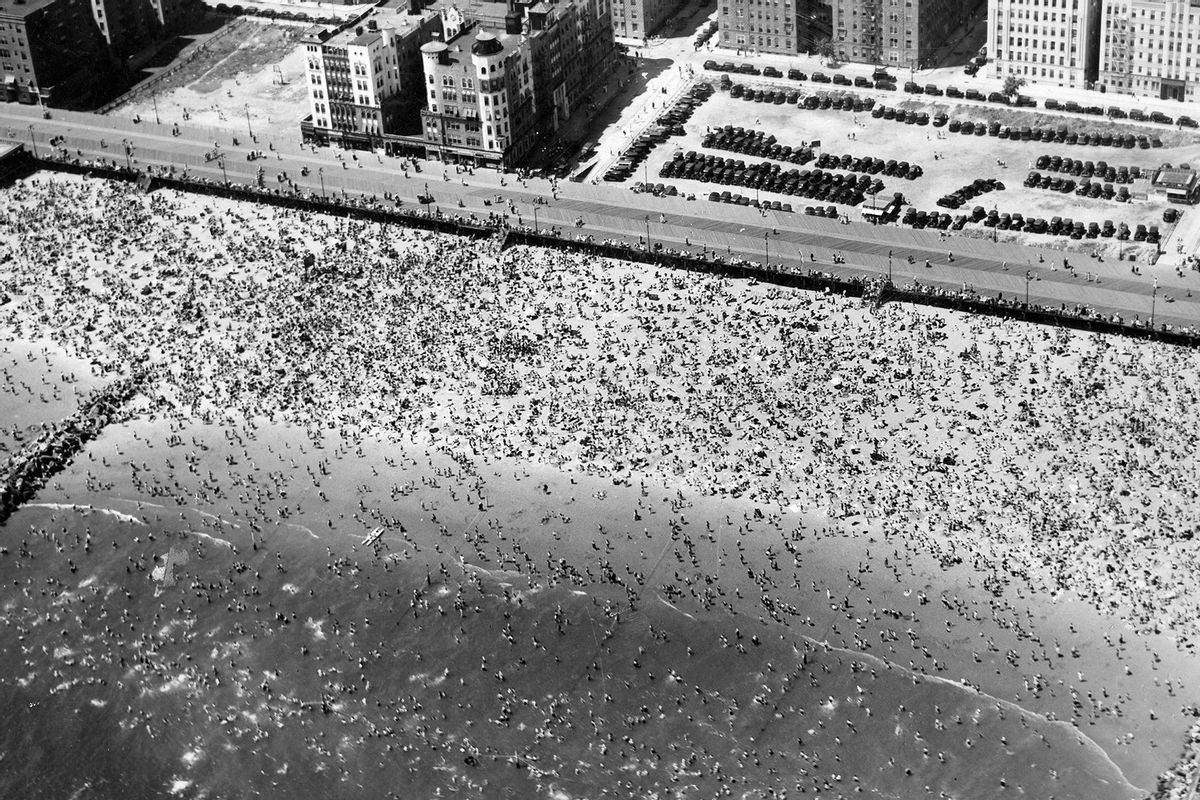 Coney Island: Crowd on the beach during the heat wave in July 1936 (ullstein bild/Getty Images)

As climate change continues to worsen, experts agree that heat waves and wildfires will become much more common. Eventually vast regions of the planet will become uninhabitable, at least during heat waves, because the wet bulb temperature (a measurement of when the weather becomes deadly) will reach 95 °F (35 °C), which kills healthy humans within a few hours. Even recently Europeans have been fighting historic wildfires while Americans grapple with a massive heat wave, including unprecedented temperatures in the Northwest.

This raises an obvious question: What kind of future lies in store for ordinary people as the heat waves get worse and worse? For an answer, it is instructive to look to one of the worst heat waves in modern history: the North American heat wave of 1936.

It was also bad luck, then as now, to be poor during a heat wave… Local newspapers urged them to buck up, stating that doctors’ main advice was that “[the] cardinal rule on combating the heat is to forget it, remain detached.”

Then things got worse in July. By the middle of that month, heat waves had covered virtually the entire contiguous 48 states. On July 6th, North Dakota and Minnesota achieved all-time highs of 121°F (in Steele) and 114°F (in Moorhead). By July 10th the heat wave had moved its focus on making historic numbers to the northeastern United States: New Jersey at 110°F (in Runyon), Maryland at 109°F (in both Cumberland and Frederick), Pennsylvania at 111°F (in Phoenixville) and West Virginia at 112°F (in Martinsburg). Before the end of the month historic highs had also been achieved in Wisconsin, Michigan, Indiana, Missouri, Nebraska, Iowa, Kansas and Oklahoma.

Beneath the jaw-dropping statistics, of course, there was tremendous human suffering. More than 5,000 Americans died as a direct result of the heat wave, and there was immeasurable damage to agriculture and infrastructure. Exacerbating matters, the heat wave coincided with both the Great Depression and the Dust Bowl, a natural disaster in which clouds of dust covered large sections of the American midwest. If there is any lesson to be learned from the 1936 heat wave, it is that much of it could have been avoided. While the series of droughts that precipitated the heat wave was no one’s fault, American farmers in the Plains regions used poor land management techniques that allowed wheat fields to become barren. As a result of the lack of vegetation and soil moisture, the Plains region wound up acting like a desert and producing more heat. From there, it was just a matter of bad luck with the weather to move the heat wave to the north.

It was also bad luck, then as now, to be poor during a heat wave. In Kansas City during the heat wave, authorities did not have adequate ice for people who couldn’t afford it, and low-income Americans would often wander the streets, hang out at movie theaters (which were air conditioned) and spend nights in various shaded parks. Local newspapers urged them to buck up, stating that doctors’ main advice was that “[the] cardinal rule on combating the heat is to forget it, remain detached.” Yet even former Mayor Ilus Davis later admitted this was easier said than done. He recalled 50 years later that he had used wet rags to cool off his car’s steering wheel, and sometimes would even need to apply them to his bed. It was “sort of unreal,” he explained, and people “just sat around and talked about the heat.”

As the planet continues to uncontrollably warm, it is more likely than not that people will be having many more conversations about the heat. To understand why, one need only look at a recent observation by Michael E. Mann, an American climatologist and geophysicist and currently director of the Earth System Science Center at Pennsylvania State University, about the recent round of European heat waves.

“Climate change has made the planet hotter and drier,” Mann told Salon by email. “A combination the leads to more widespread, destructive and deadly wildfires. Our own research suggests that human-caused warming has also altered by jet stream in a way that leads to more frequent persistent summer weather extremes like the ones we’re seeing play out in Europe at this very moment.”

Matthew Rozsa is a staff writer for Salon. He holds an MA in History from Rutgers University-Newark and is ABD in his PhD program in History at Lehigh University. His work has appeared in Mic, Quartz and MSNBC.