Each winter I have to laugh that global warming deniers point to this snowstorm or that arctic outbreak to disprove that climate change is not happening. Many are meteorologists who love cold weather phenomena and are quite biased, but do see long term trends. So far in the 21st century it has not warmed up enough to prevent very cold conditions from popping up somewhere across the planet during winter, and that’s a good thing. Today let’s delve into the synoptic pattern producing the “extremely” cold weather over the U.S.

Globally, as one might expect with climate change, the cold is currently confined to one area…and it happens to be North America:

If you don’t like how cold it is in the eastern U.S., may I suggest a vacation to nearly anywhere else on Earth? https://earther.com/why-the-eastern-us-will-be-bone-chillingly-cold-through-1821625054 … 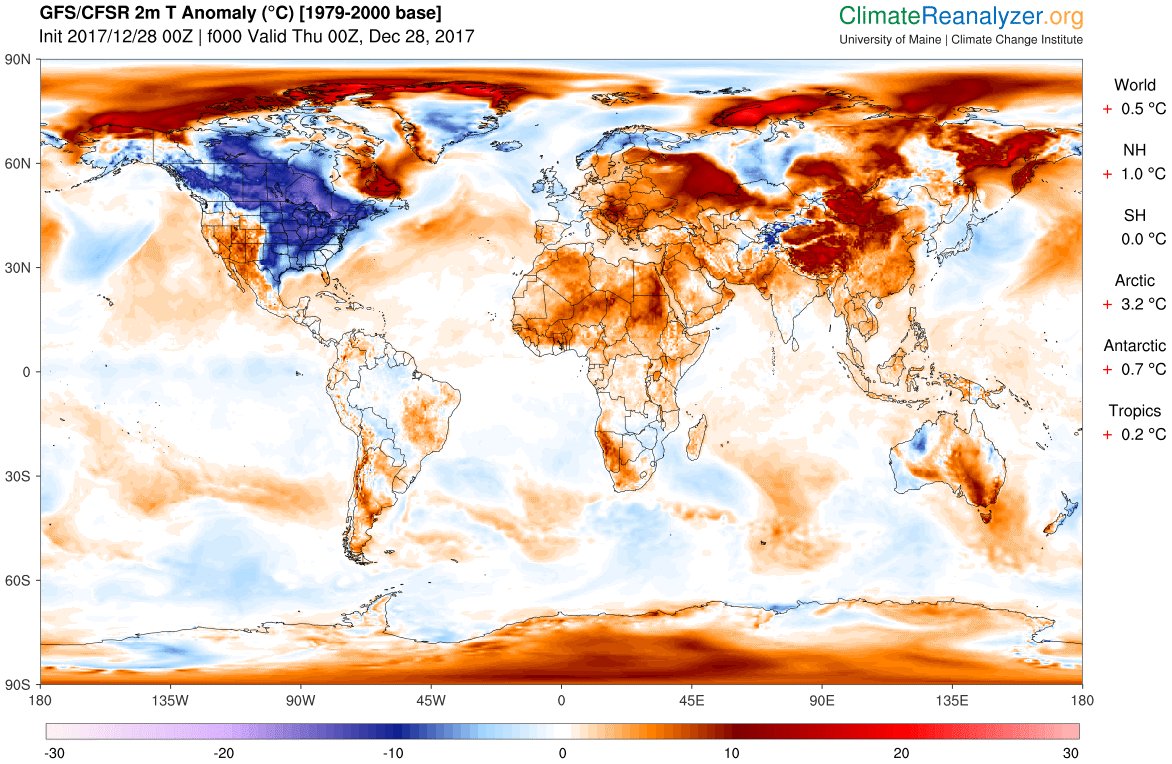 As far as big snowstorms go, yep, they fit into the broad, climate change scheme of things. This is worth a good read:

No, these massive #snowstorms don’t disprove global warming – they are one of its many expressions. https://thinkprogress.org/why-big-blizzards-in-winter-dont-disprove-global-warming-9fdd41e71f0b/ … (with real bits of @MichaelEMann)

Extreme hot temperatures will outpace low temperatures, but I’ll emphasize that there will be record cold: https://www.usatoday.com/story/weather/2016/11/21/us-record-high-temperatures-overwhelm-record-lows/94234824/

For climate change deniers getting very excited that it’s cold outside at the end of December, here’s the ratio of hot extremes to cold extremes in the U.S. over the past 365 days. It exceeds 3 to 1.

Speaking of  record cold, I’m now seeing many records being set from the Midwest into the Northeast. Let’s check that “record score card” again updated through 12/24:

Wow! The ratio of DHMX to DLMN for December 2017 remains above 10 to 1. Currently it’s as if the atmosphere is gong into “cold mode” to mathematically bring that ratio closer to about a 3 to 1 average for this decade. As an aside for seasonal forecasters, if you see over a month or two period  of that ratio getting well out of bounds, expect a correction.

Here are a few outstanding reports of record lows from this morning:

You know it’s cold when you’ve bottomed out our temperature dials -30° in Watertown, NY is the coldest December temperature there in 28 years! #ItsSoCold 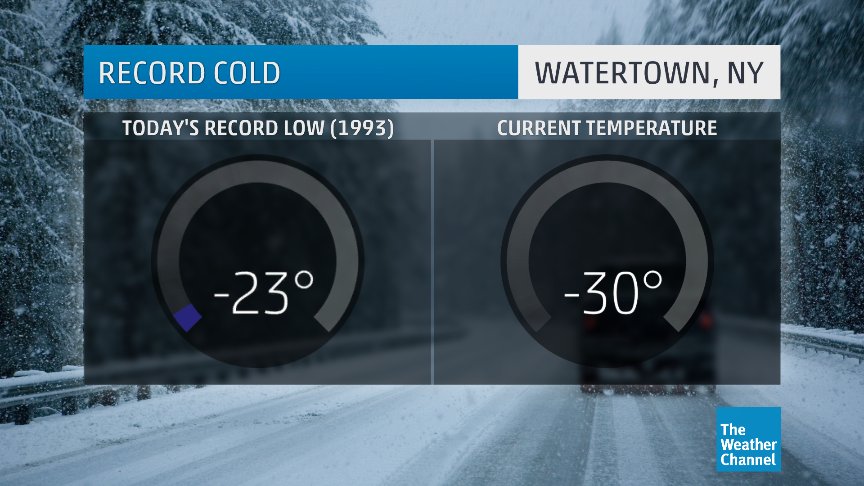 Flint, Michigan, has set an all-time Dec. record low for the 2nd straight day, dipping to -17 this AM. Records date back to 1921 there.

A growing and impressive list of record lows from the Upper Midwest to Northeast. And this cold period has another week to go, at least. Read more: http://wapo.st/2BOfPlf

This is a “hot” topic today among climate scientists and meteorologists since Erie PA picked up a record five feet of snow and counting over the last couple of days. What I’ll present now is just “common sense” basic meteorology knowing that a lot of factors are involved.

First, we know that to get a lot of lake effect snow in one place there has to be a long, focused fetch of cold air (usually around -10C at 850 mb) running from the Great Lakes over land rising in elevation away from open water. Obviously there won’t be much lake effect snow (LES) if there isn’t sufficient cold air as was much the case the last two years without significant troughs at 500 millibars in the East. LES amounts will probably go way down once the polar vortex has shrunk, but that might not occur for decades, if at all, should the planet can get its mitigation act together.

Second, its been bandied about this week in scientific circles that the greater the temperature difference between the relatively warm lake and air temperature the greater the snowfall. Knowing some about thermodynamics, I’d have to say yes…warmer air at a lake’s surface leads to more rising air and more precipitation once that air hits the condensation level.  Remember that warmer air can hold more moisture… a climate change signal.

A warm fall over the Great Lakes leads towards warmer water temperatures leading to a period of longer open water in winter provided that winter temperatures are not of the mega-cold variety. You can’t get much if any LES from a frozen lake. Indeed we have had in 2017 a warm fall through early December leading now to a cold winter in the Midwest. Incidentally, it probably will be cold enough this year for the first time since 2000 to see a frozen Lake Erie:

Dr. Katherine Hehoe of Texas Tech had some thoughts on how climate change was affecting LES yesterday:

What’s the connection between lake-effect snow and global warming? First, as the world warms, it’s harder for ice to form, and it isn’t lasting as long. For 15 of the last 20 years, Great Lakes ice cover has been below the long-term average.pic.twitter.com/RUDn5dXcoe

Second, this is increasing the risk of days when it’s still cold enough to snow, but the lakes aren’t ice-covered. So lake-effect snow is on the rise.

So what’s happening this year? Both natural and human factors are at work: the influence of natural cycles like La Nina and the NAO + exacerbated by a long-term warming trend driving increased risk of lake-effect snow = very low Great Lakes ice cover forecasts for this year.

Wow! Given the perfect fetch over Lakes Huron and Erie, water and air temperatures Erie PA really is getting a big dump of snow: 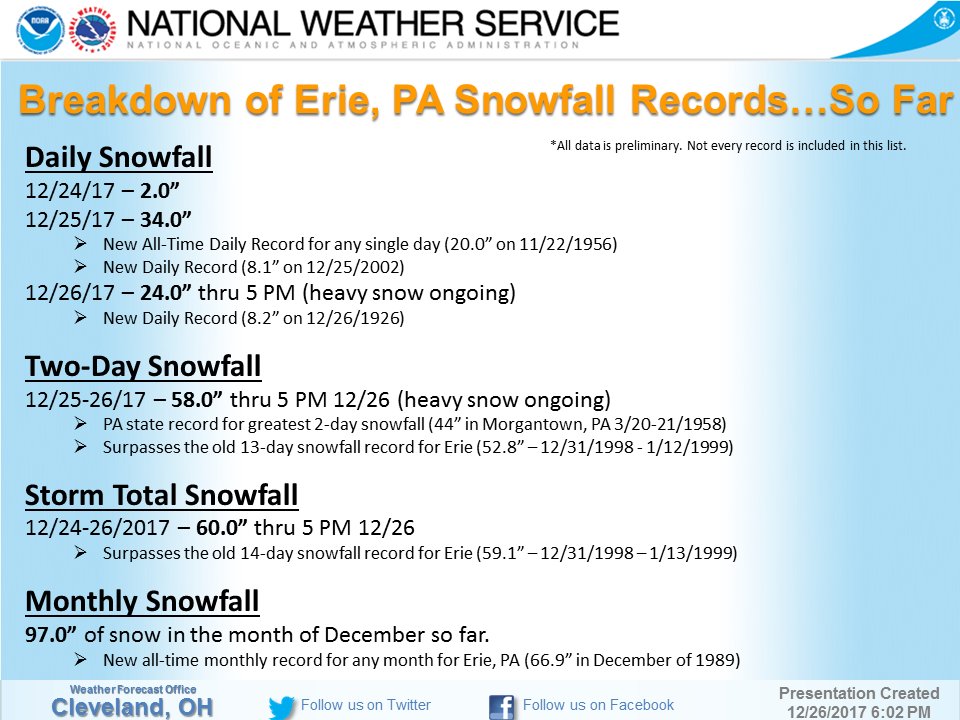 NWS announced that REDFIELD NY “unofficially” broke the Oswego County Record for two day snow total with our 62.2 ” in 48 hours! (Old Record was 57″ in Bennetts Bridge) (Unofficial until it is “certified”) I might be a little excited!!!!!!!! 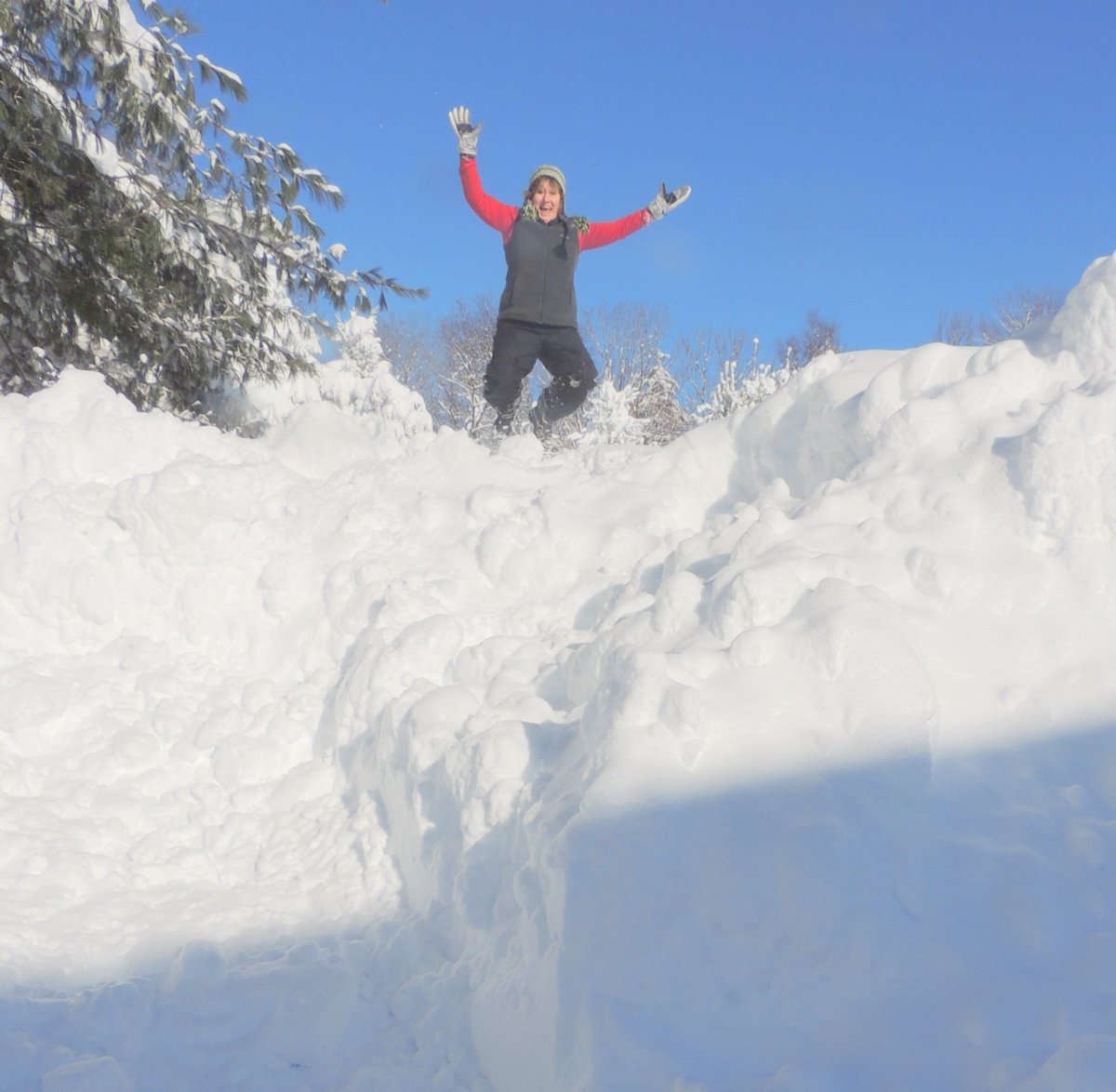 Could the winter of 2017/18 have off the wall LES totals due to that “Ridiculous Resilient Ridge” in the West keeping the cold air machine locked into the East? We will see.

We are finally getting significant reports of record lows today after a dearth of them this month, and from the nation’s “ice box” no less:

UPDATE…International Falls trimmed another degree off their low temperature from this morning. Between 6 AM and noon the temperature dipped to -37° F! Brrr. #MNwx #Cold

I would anticipate more than 100 reports of record lows from this morning alone in the Midwest looking at this chart:

Huge chunk of CONUS with below 0 morning lows! 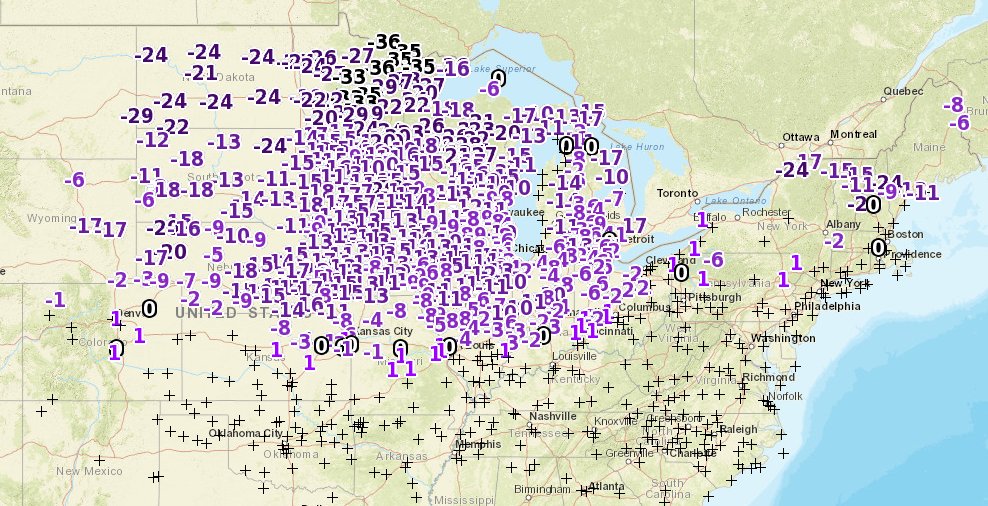 And no, I never wrote that there would not be any record cold this winter.😊

For those of you who doubted the validity of cold, said no records would be broken, mentioned a lack of snow cover, and poked fun at meteorologists calling for cold earlier in the month. I would like to politely and professionally say: You were wrong. #natgas 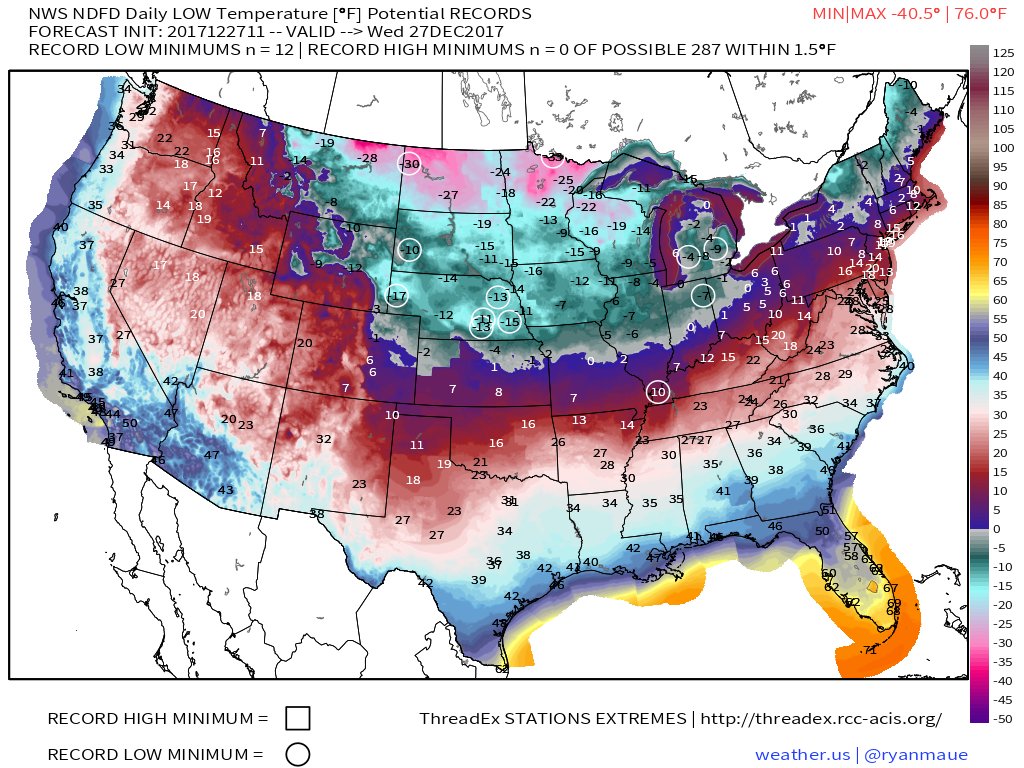 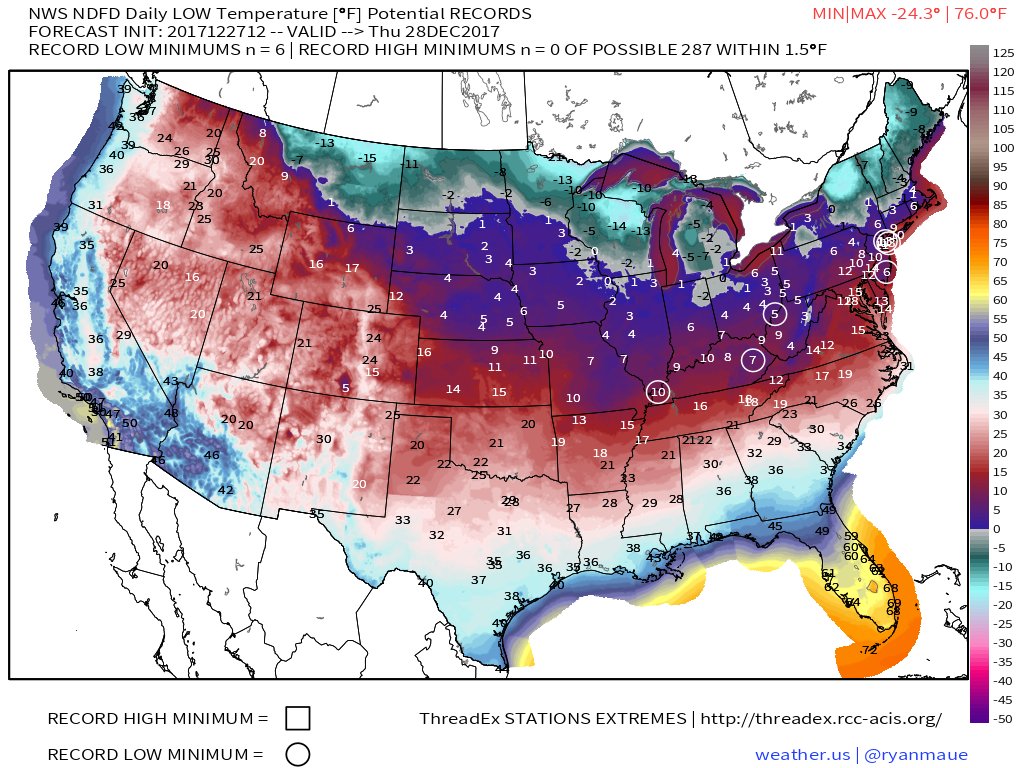 The rest of the planet outside of North America looks very toasty, though:

The coldest weather (relative to average) will be positioned right over North America through at least the next 7-days…
[Maps: http://www.karstenhaustein.com/climate ] 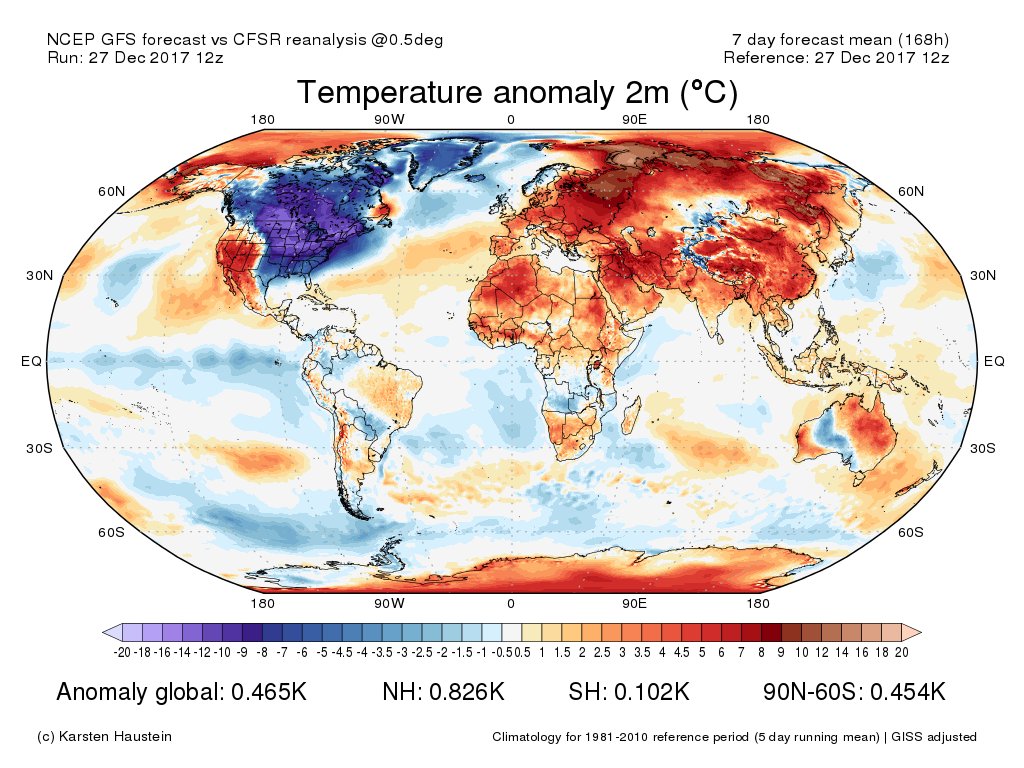 I’ll add more relevant information if it crosses my radar later this evening.