If you are living in the Midwest or anywhere east of the Mississippi River this weekend you are wondering where is global warming? We’re seeing record cold. What happened? My answer to these questions is that while the overall trend is for average temperatures of the planet to go up, the atmosphere can still at this point in time produce mighty cold weather regimes. Remember that climate is the overall trend or averages of weather over months and years.

Well that underperforming due to carbon pollution “cold team”  has certainly been racking up the points the last week. It’s the start of 2018 in January and surprise! We finally see some blue on the NCEI “record score board” (all set or tied record individual counts reported  from https://www.ncdc.noaa.gov/cdo-web/datatools/records):

Ever since the start of the amazing “streak” of 37 consecutive months of more daily record highs than lows set across the U.S. in December 2014 I’ve not seen the atmosphere stacked to produce a colder than average month until now. There will be another substantial number of daily record lows (or ETs) set in the Northeast on Sunday the 7th added to the scoreboard, so there will need to be a significant January thaw to prevent the “cold team” from finally winning at least for the period of one month.

Let’s break down some record numbers set so far during this historic cold wave, which started in the northern Plains on 12/26/18 when a strong arctic high began to infiltrate the United States:

The numbers are colored in blue (representing cold on all my stat charts) since there are far more record cold reports than warm.

If it wasn’t for the toasty Southwest there would have been very few reports of daily record high maxes or minimums since 12/26. Meteorologically the dipole establishing a deep penetration of an extension of the old polar vortex into the eastern U.S. is to blame for the cold. Due to a strong El Nino combined with global warming from 2015-2017 we didn’t see the dipole develop, and there were very few intrusions by the polar vortex into the U.S. those years leading to a lot of warmth. The polar vortex was strong from 2013-2014 after the U.S. had a record warm 2012.

We’ll see if 2018 will be similar to 2013-2014 weather wise. It certainly has started out that way with a drought rearing its ugly head again in California and a historic cold wave in the East. Carbon pollution may tip the scales toward warmth by this summer, though, which would be a bad thing for agriculture and people not prepared for record heat.

There are strong signs that our historic cold wave will be over by Tuesday the 9th with Pacific air taking over most of the lower 48 states:

Daniel Swain’s researched dipole of a strong ridge along the West Coast with the Hudson Bay low digging into the U.S., persisting longer due to climate change, will finally break down allowing a strong system, as shown in the above chart, to move into California where much needed precipitation will fall. Sometimes every good cloud does not have a silver lining however:

This is why there is so much concern re: upcoming storm near #ThomasFire burn scar. Vast regions w/steep slopes have been completely denuded of vegetation, w/ an accumulation of ash that can be mobilized in wet cement-like debris flows. #CAwx #CAfire #Ojai #Ventura #SantaBarbara

Above Ojai along Highway 33, the #ThomasFire left dark canyons. Rains expected next week could mean slides (and probably closure of 33 in mountains). Yellow spot at lower left is jacket of Forest Service worker.
12:19 PM – 6 Jan 2018

Will there be significant record warmth after the 9th? We will see.

What does the Bomb Cyclone Have to do with Global Warming (Part 3)?

The last point to be made in association with yesterdays impressive Winter Storm Grayson is that partially due to sea level rise that has already occurred from global warming we saw record storm surge and coastal flooding in the Northeast. For example, check this out: 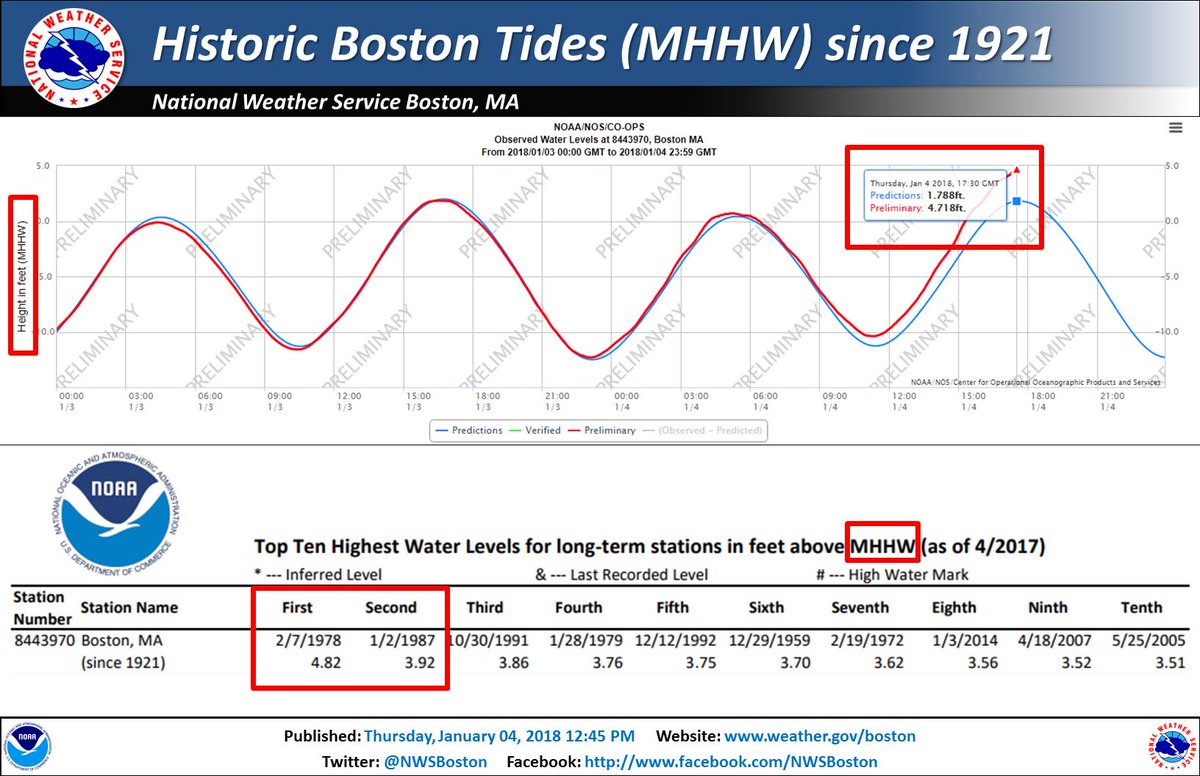 NWS BostonVerified account @NWSBoston
[BREAKING] #Boston tide observation on its way to being the HIGHEST EVER RECORDED since 1921; record 4.82′ MHHW (or 15.1′ MLLW) back w/ the #blizzard of ’78; presently at 4.718′ (or 14.99′) which is the second highest tide ever on record
8:16 AM – 5 Jan 2018
From Bob Henson’s Category 6 Blog: https://www.wunderground.com/cat6/january-thaw-sight-after-two-week-wintry-onslaught-and-bomb-cyclone
Here are the stations that had a top-ten highest storm tide on record during Grayson, measured in height above the high tide mark (the Mean Higher High Water, or MHHW). These Boston and Bar Harbor records would not have been broken without the help of long-term sea level rise, which is boosting water levels along the northeast U.S. coast by close to an inch per decade.

Point being is that as the planet sees stronger storms (or even storms at about the same strength as in the past) from climate change coastal flooding from sea level rise will get worse. Alarmingly, new research has found that Antarctic ice is more unstable than previously thought so Climate Central has come up with these projections:

The planet’s climate works like a big set of dominoes, except that one domino, such as a dominoe falling in Antarctic, can make another fall on the other side of the planet in New England.
And yes:

Before spending a few billion on a sea wall, might want to divest from the fossil fuel companies causing the trouble. An ounce of prevention…

Incredible capture from Marshfield, MA yesterday of the blizzard storm surge! Check out that wave in the background. Wow. 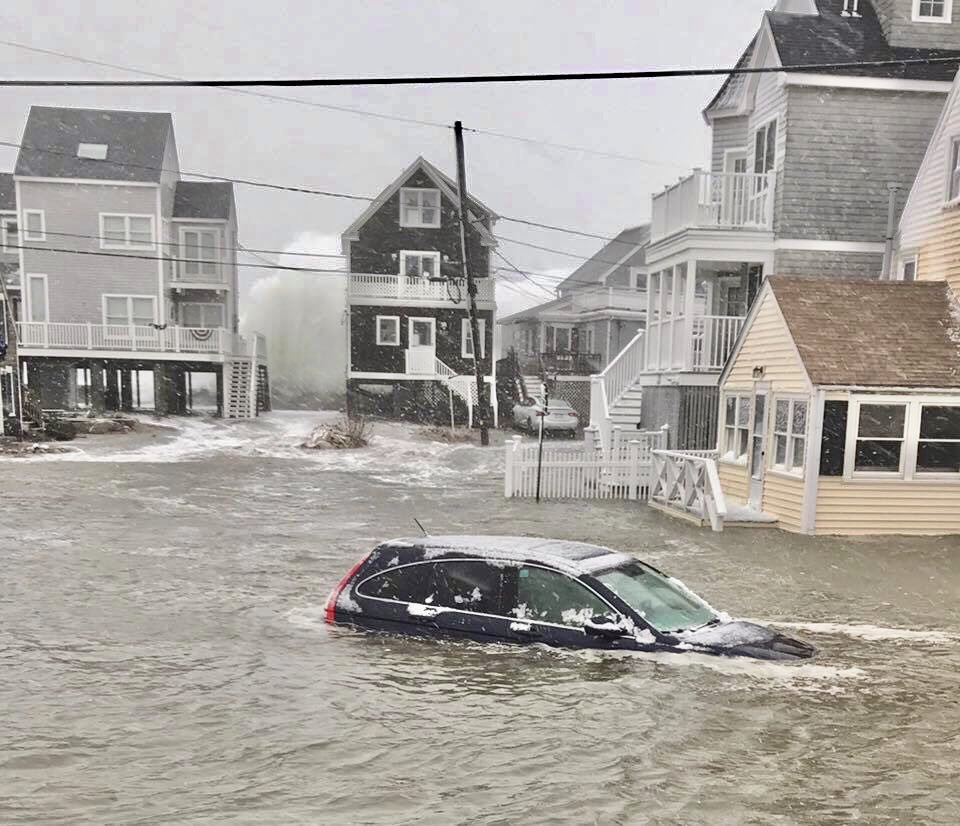 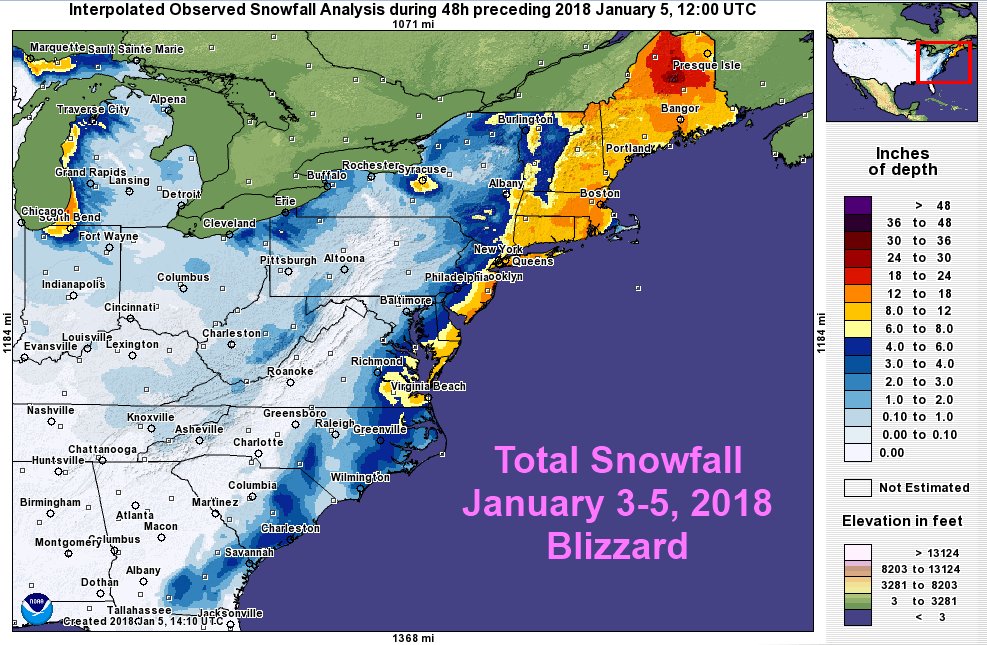 [4pm] Here are the latest snow totals from yesterday’s Nor’easter. 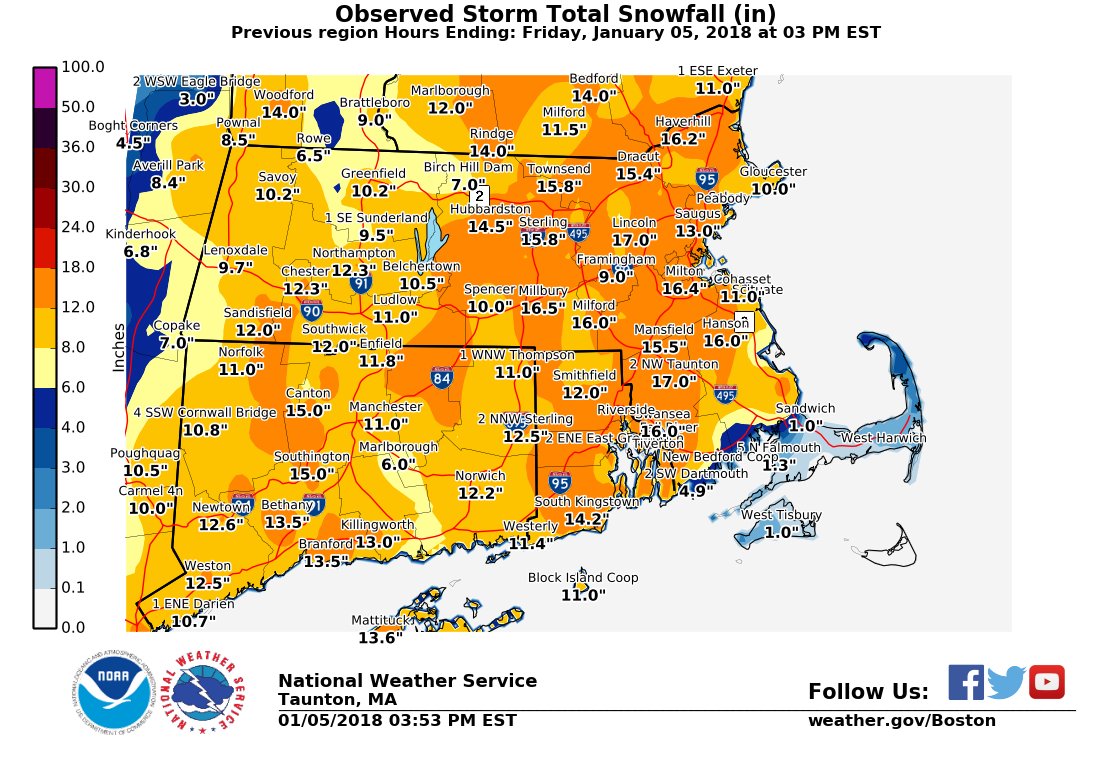 Here are some maximum wind gusts from Grayson: 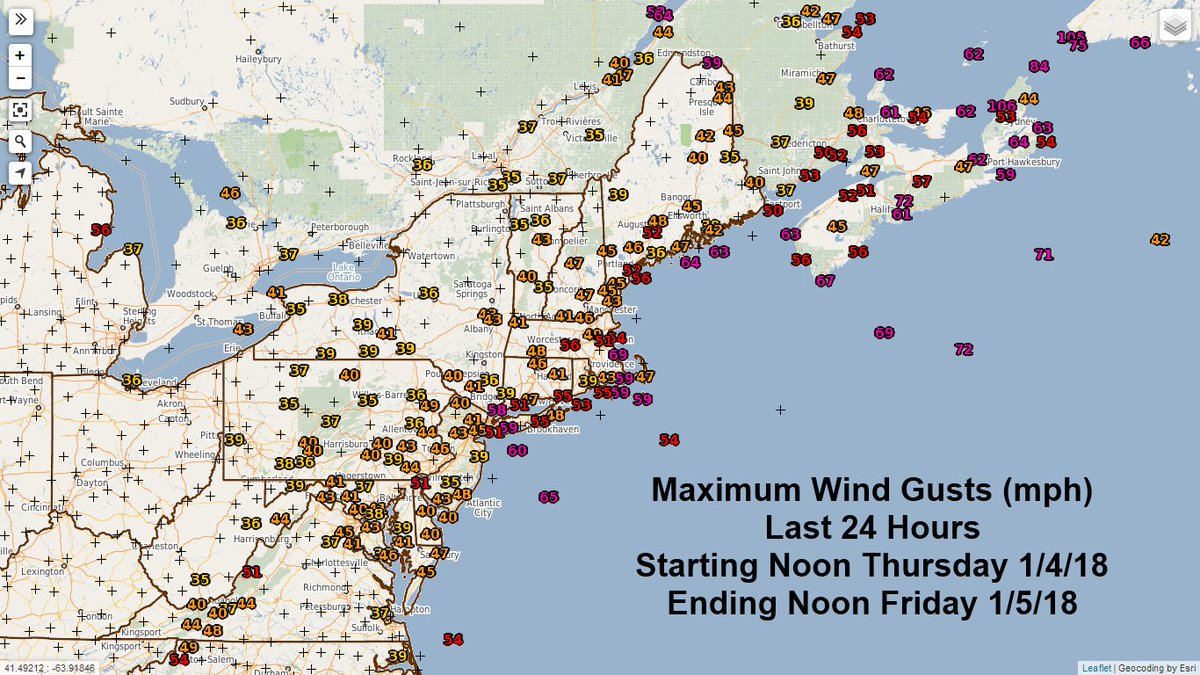 I’ll be posting more ET reports should they cross my radar later today. Here is what to expect for this weekend. Brrr!

Record COLD in Northeast & Mid Atlantic underway — a clean sweep of records –> daytime highs & nighttime lows on Saturday and Sunday.   And to add further insult, the WIND CHILL will be brutal