The National Center for Environmental Information has completed their report for 2017 this morning indicating that last month and last year was very warm indeed, which we can blame on carbon pollution. Here are some temperature rankings and notes from Climate Central’s Sean Sublette:

2017 average temperature rankings from @NOAAClimate. Most states had one of their 10 warmest years on record. Five had their warmest year on record (AZ, GA, NC, NM, SC). 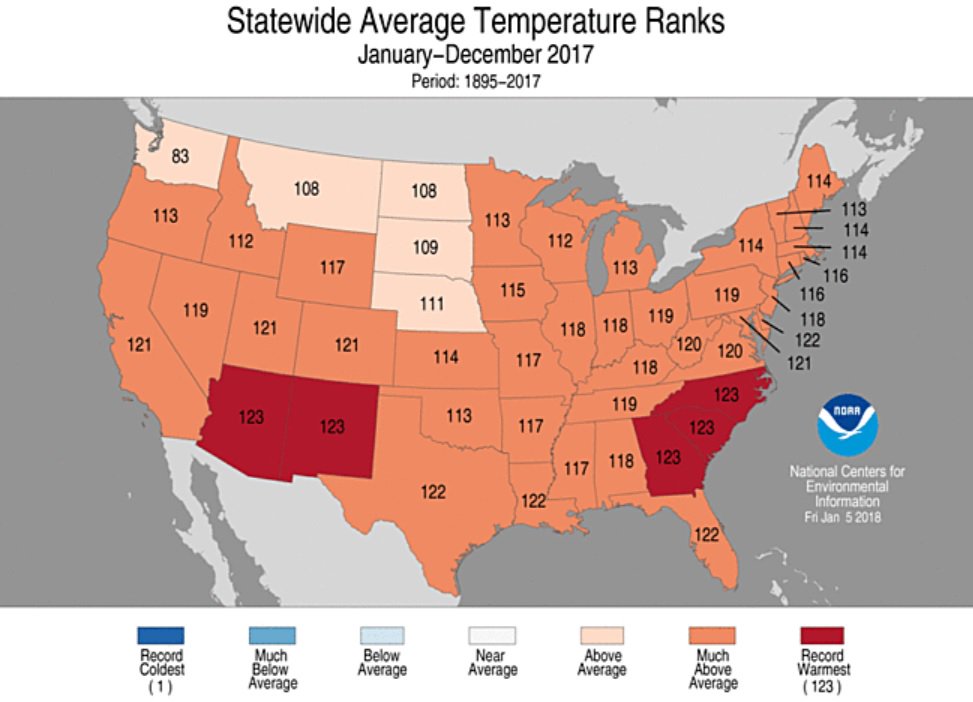 Wow! My home state of Georgia saw its warmest year on record. All this warmth is bad news and can be correlated with the high cost of weather related disasters. One example is that the peach crop in Georgia was directly affected by the warmth: http://www.walb.com/story/35592005/most-of-2017-georgia-peach-crop-lost-because-of-weather . Here is more from Sean: 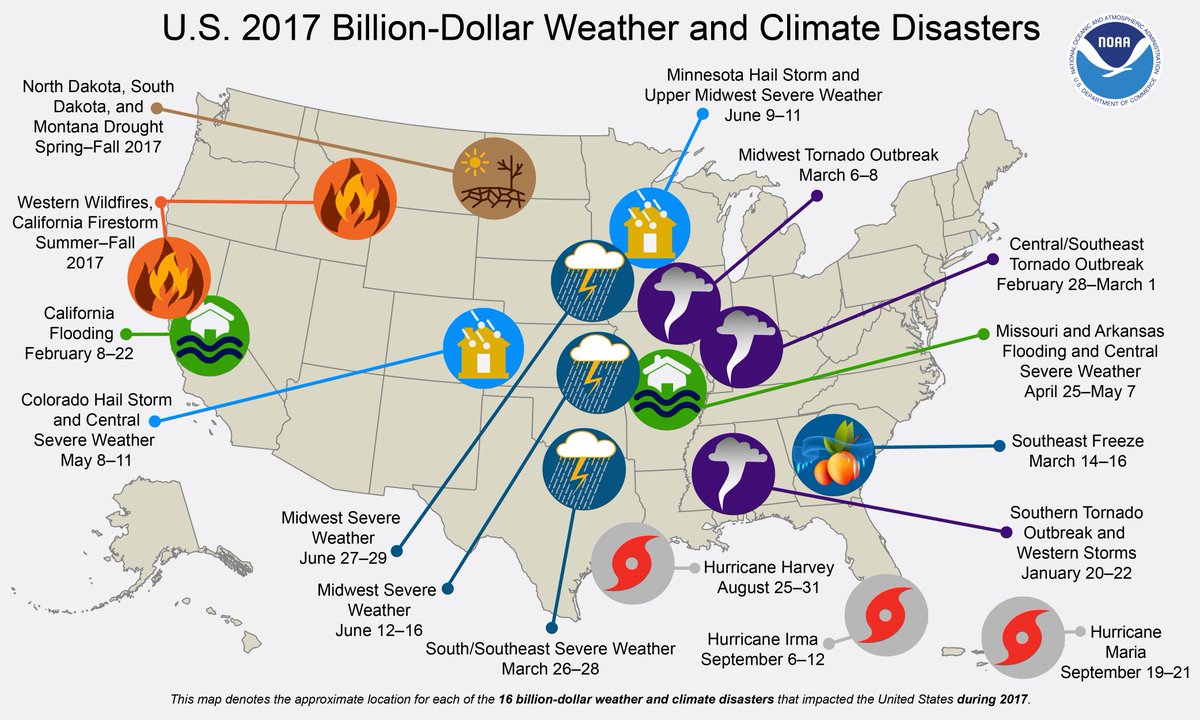 This is actually an incredible statistic: devastating Western wildfires in 2017 collectively caused *three times* more damage to human homes and infrastructure than any previous year on record. 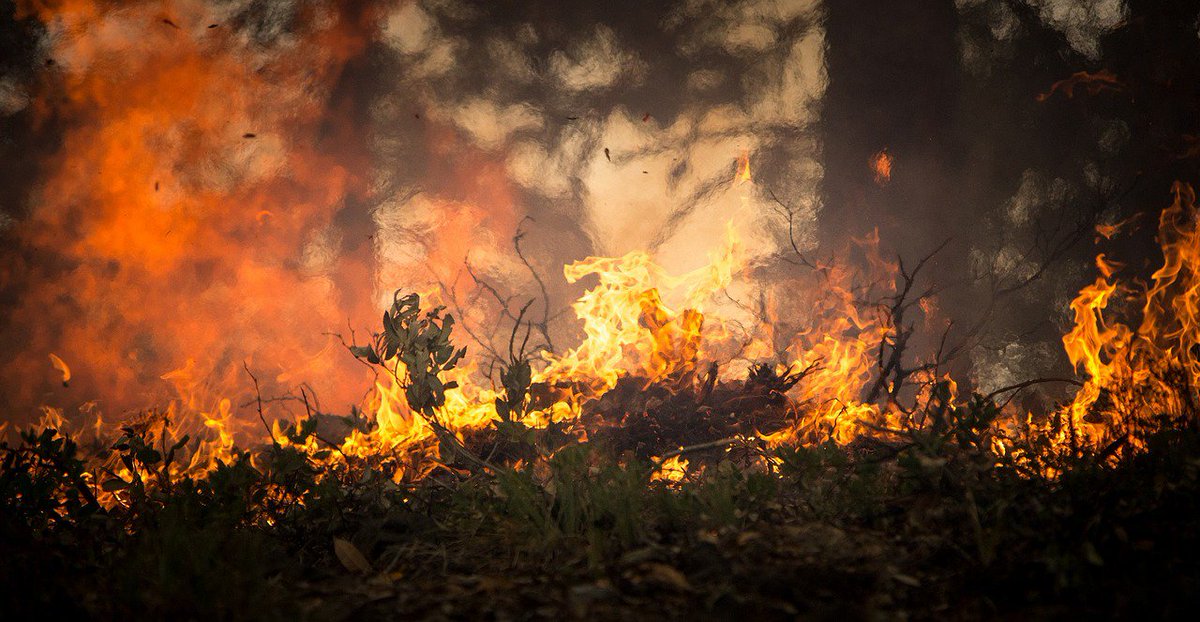 Despite the late-month cold spell in the East, only the Great Lakes states and New England were substantially colder than normal for the month of December… and nowhere near the coldest on record. 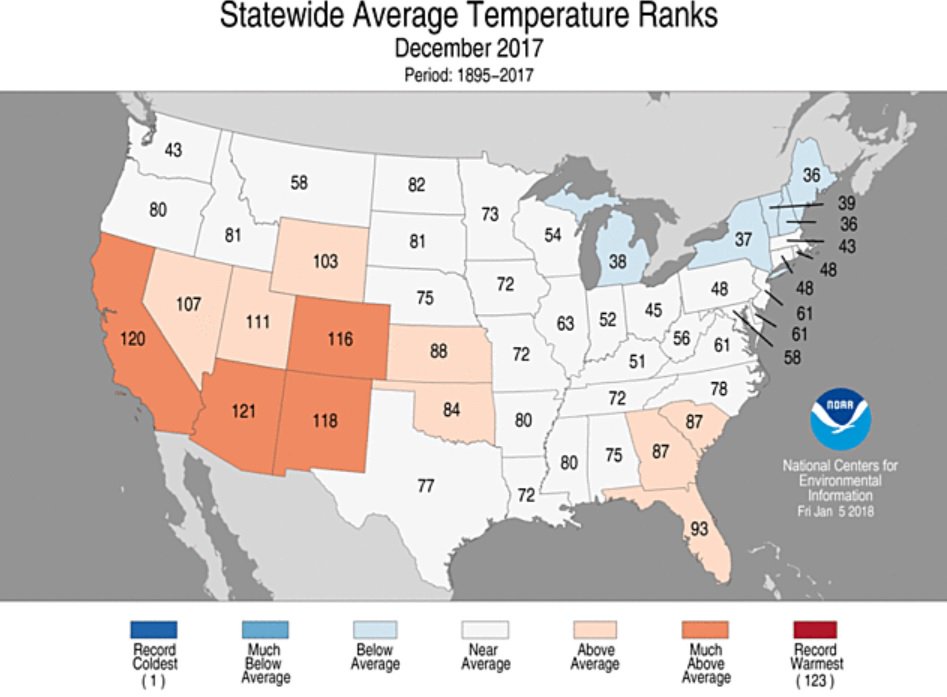 Let’s not forget about Alaska, which had an eye popping warmest December on record:

Alaska just had its mildest December on record by far: average -7.0°C, that’s +8.7°C above normal! 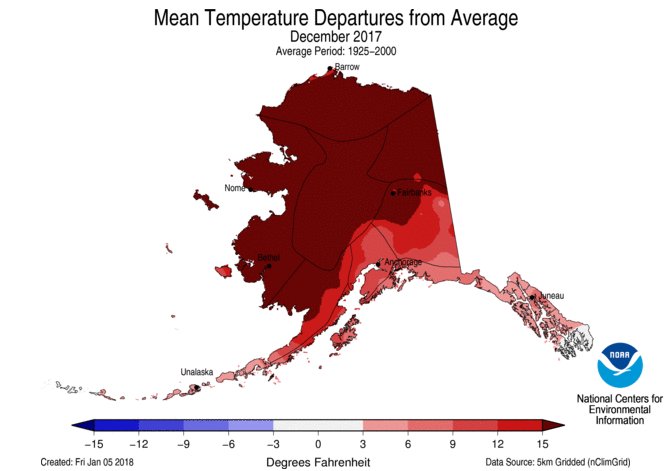 NOAA NCEI ClimateVerified account @NOAANCEIclimate
December 2017 was the warmest December on record for Alaska with a statewide average temperature of 19.4°F, 15.7°F above average: http://bit.ly/USClimate201712  #StateOfClimate
11:23 AM – 8 Jan 2018

How warm have the last 4 consecutive calendar years been in the U.S.? Warmer than any previous 4-year period… including the Dustbowl era of the 1930s. 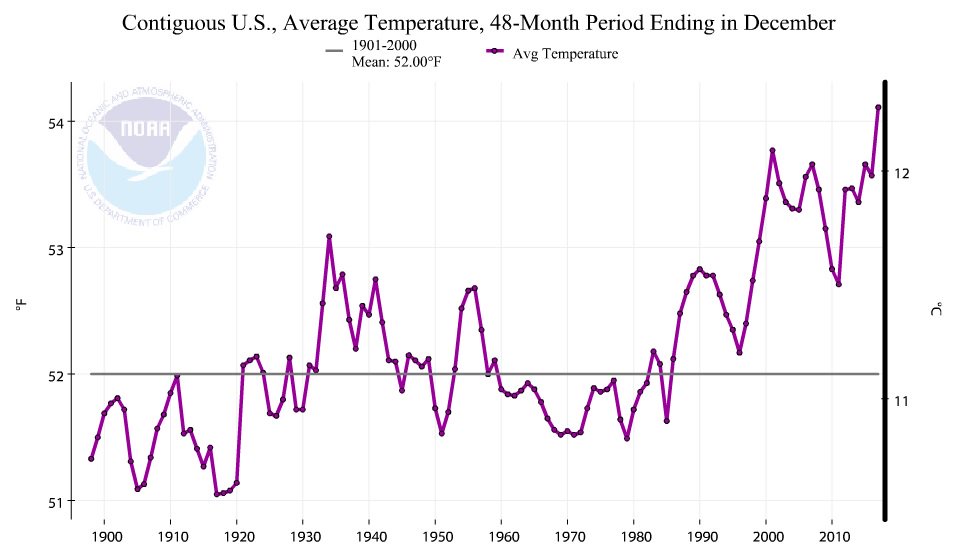 1:14 PM – 8 Jan 2018
As far as record temperature ratios go as would be expected a ranking of third warmest for the lower 48 states correlates well with my finding of the fourth highest ratio of DHMX to DLMN for the U.S. since 1920 (when there was sufficient data for statistical analysis) behind 2016, 2012 and 1999 in that order:

As I keep writing the higher those record ratios get the greater the chances for dangerous heat during the summer and drought.
Anyway, it can still get extremely cold still!

Congratulations! If you live east of the Mississippi, you likely just experienced the coldest first week of January on record. An amazing blast of arctic air. 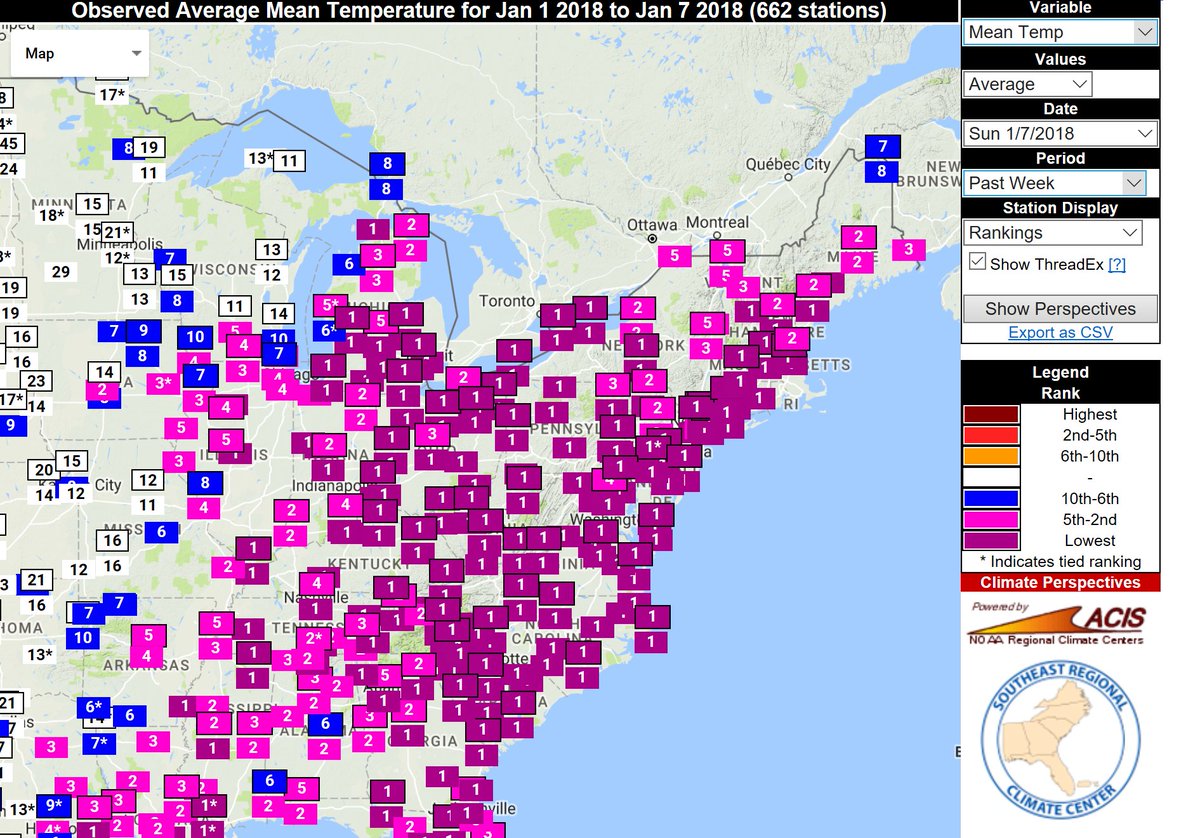 Here is a list of all-time low min records set during the historic cod wave that have come into the NCEI system so far for 2018:

One of the many facets of climate change I have not touched on much is the steady increase of acid in the Earth’s oceans due to the uptake of carbon leading to ever more deadly changes to habitats. Should food chains be disrupted enough those dependent in large part on the sea for their diets will have to make adjustments. Starvation for large populations is a real possibility if mankind can’t conquer the carbon pollution problem.

By definition from Wikipedia : “Ocean acidification is the ongoing decrease in the pH of the Earth‘s oceans, caused by the uptake of carbon dioxide (CO2) from the atmosphere. Seawater is slightly basic (meaning pH > 7), and ocean acidification involves a shift towards pH-neutral conditions rather than a transition to acidic conditions (pH < 7). Ocean alkalinity is not changed by the process, or may increase over long time periods due to carbonate dissolution.[4] An estimated 30–40% of the carbon dioxide from human activity released into the atmosphere dissolves into oceans, rivers and lakes.  To achieve chemical equilibrium, some of it reacts with the water to form carbonic acid.”

Most of us have read and heard about the horror stories in association with coral bleaching from ocean acidification. Some states, such as Washington, where seafood is a big industry, are implementing studies and plans for protection:

In the future we will see how much the changing chemistry of the oceans affects the heath and well being of individuals highly dependent on seafood. I hope to report some good news on this front in the next few years.

Let’s not forget that the warming of the oceans themselves causes corral beaching, and a new study suggests that this process is happening faster:

As of this writing our historic cold wave is waning. The typical “January Thaw” will occur over a large section of the nation this week:

Finally a different weather pattern to look at … and it’s not dreadfully cold at all … instead a January thaw by mid week.  Coldest air bottled up in NW Canada for a while hopefully.

Tomorrow morning a warming trend will be well underway in the Midwest with some dangerously cold, but more typical temperatures persisting in the Northeast:

Obviously it’s summer in the southern hemisphere where Australia is seeing another blistering summer, even by their standards:

Here is an eye popping ET record report from down under:

Here is a report of record cold from our nation’s Capital:

NWS DC/Baltimore‏Verified account @NWS_BaltWash
Dulles http://ht.ly/hpvA30hCSM2 ,  and BWI http://ht.ly/LqmC30hCSNa , both broke their low temperature record for the day. DCA did not, but had their first single digit morning since Feb 20 2015.
I’ll add more record (ET) reports to this post should they cross my radar later today.