Dear Diary. Instead of presenting climate change findings today this short essay will address the spiritual health of a society that in general knows how to progress, as in the case with green energy, but lacks the spiritual and even moral wherewithal to do so. Today is Martin Luther King Day in the United States. Were MLK alive today what would he say about where the U.S. is on global warming? Not many people know that I am also a Baptist minister’s son following lock and step spiritually with climate scientist Dr. Katherine Hayhoe. Before my dad passed at the turn of the century he came to know how passionate I was on the climate change issue. What I failed to recognize before my dad’s passing is that people won’t change just by presenting facts alone, particularly if the road ahead is hard, and there are easier, more enticing paths to follow.

In the past couple of years, particularly after the Popes Encyclical on climate change, I’ve come to understand that a society or country won’t do the right thing unless it is morally grounded. Science can open eyes showing all how creation works and reacts to different physical stimuli, but morally grounded leadership is necessary to implement good plans. Spiritual leaders and scientists can work in tandem to guide Earth towards a bright, green future.

One of the failings of leadership is not recognizing that analytical knowledge can’t be separated from morality involving empathy and compassion. What would MLK think about Puerto Rico in early 2018? After moral authority is given by a leader like Pope Francis on the climate issue, we as a society need to move forward.  Science sometimes opens Pandora’s boxes like the splitting of the atom or the internal combustion engine. Spiritual leaders like Dr. King can guide planners to use new discoveries to benefit all, particularly the least among us, while molding individuals to do right by their fellow man, guiding us to stay away from Pandora traps.

One of many great quotes that still resonate today….In fact seem more relevant today than ever sadly…. 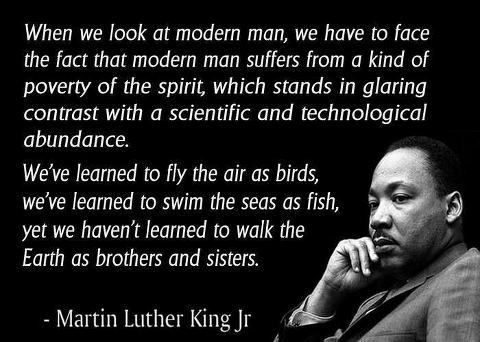 What is happening now is cathartic in the U.S. opening wounds that need to be drained, exposing greed, corruption, and yes the evil of racism. In that respect, thank you Donald Trump. Globally, it has been shown that climate change will affect the poor first whether they be in low lying areas of Bangladesh or in coastal areas of southeast Texas recently affected by Harvey. Eventually the climate problem will affect all our progeny, no matter how rich or poor as exposed by science. Dr. King would access that the U.S. is suffering from a poverty of the spirit on many issues and levels but also on climate. We now know how to technologically fix the climate problem, yet we don’t have the moral fortitude to do so. In a sense, we are suffering from a poverty of the spirit not embracing truth as revealed by the best among us.

It’s oh so easy to side with the lie that all is well, and we can defile the planet with carbon pollution to our heart’s content. In 2016 we elected leaders who greedily want to take the short sighted, most profitable, easy way out regarding energy use. By doing so, as Dr. King stated, we aren’t walking on the Earth with our brother and sister nations, as guided by the Pope, towards a green, vibrant city on a hill.

Morally we have lost our way on the climate issue, but that is changing I feel on this MLK Day. I’m optimistic that after the elections of 2018 and 2020 every generation in the U.S. will do the right thing, joining the rest of the world, battling the evil behind climate change after the combination of much soul searching and more good science.

O.K. It’s now time to get off my preachy soap box and present some ET data for today.

It looks like record warmth in Alaska is continuing:

Translated from French by Bing 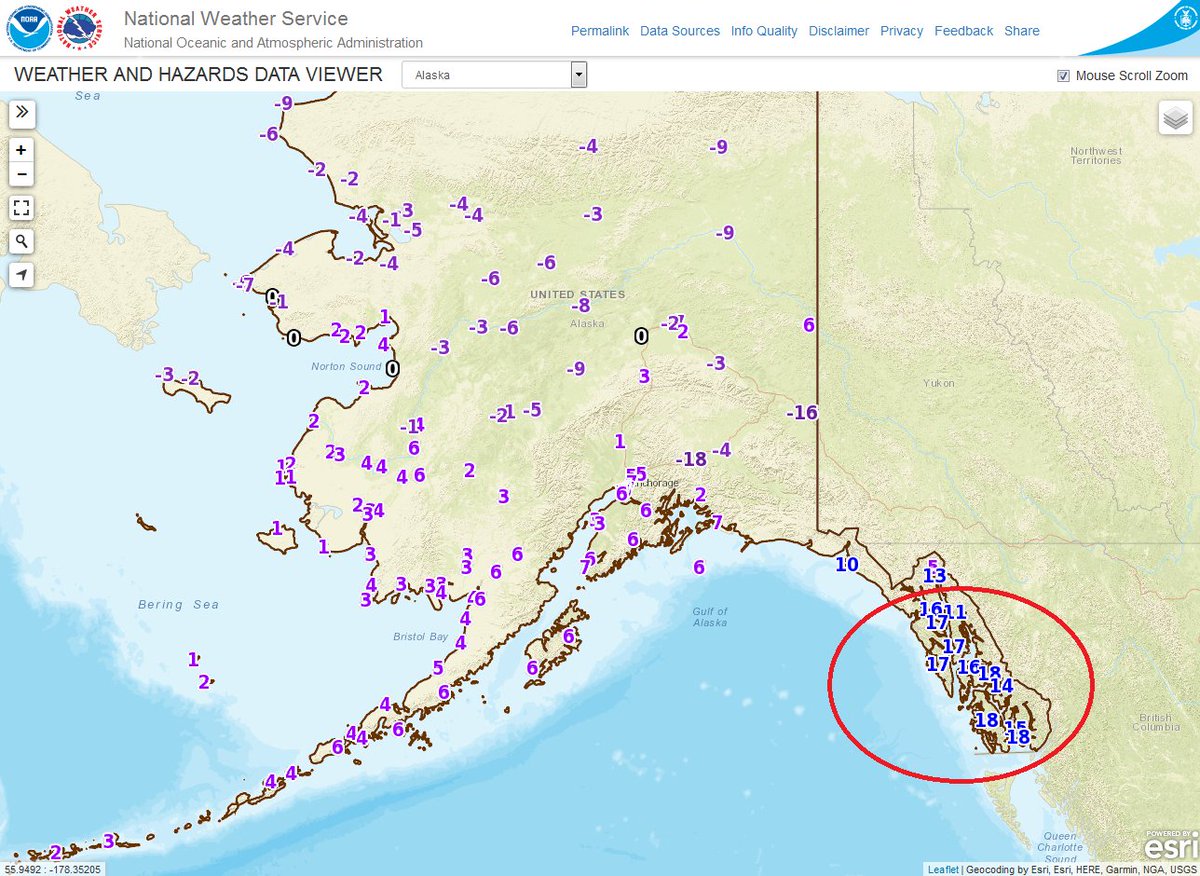 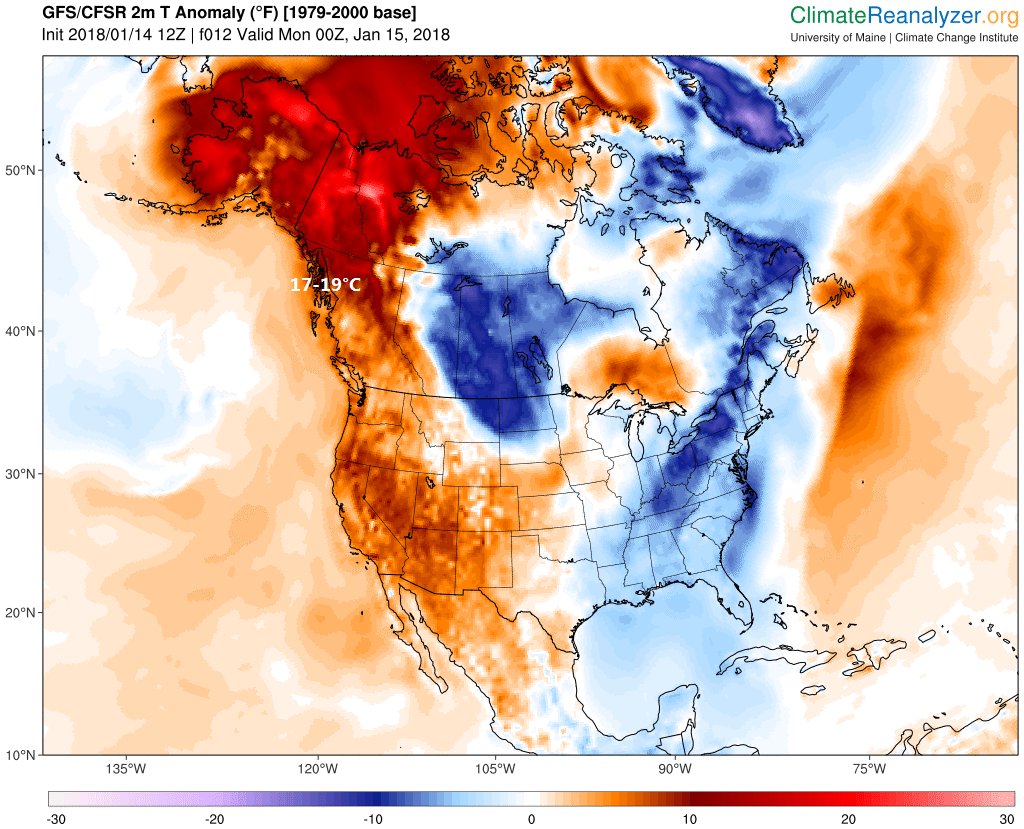 Highest temps ever recorded in Alaska during January! Old state record high for the month was 62°F, set in 2014 and previous years. 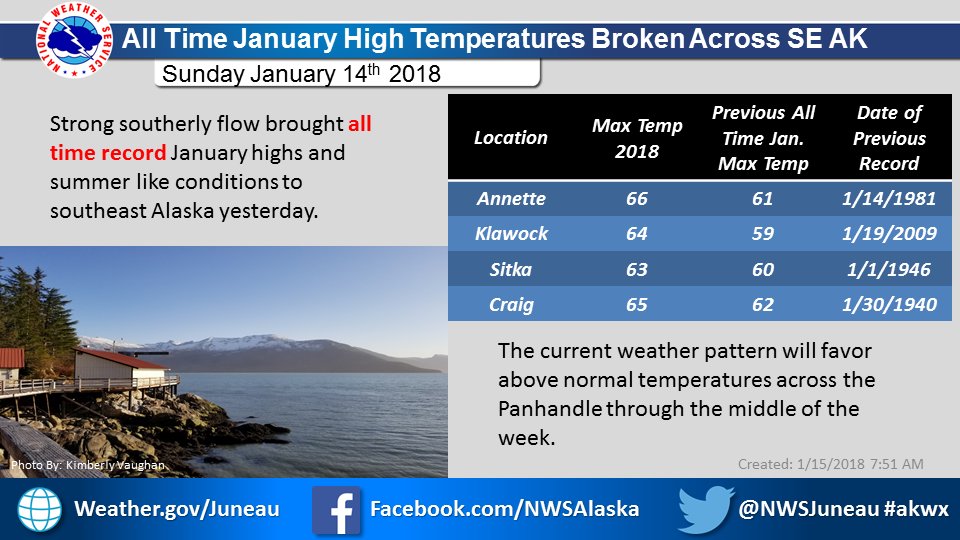 NWS Juneau‏Verified account @NWSJuneau
Too cold for you in the lower 48? Come up to SE #Alaska for a break from the winter weather! #akwx 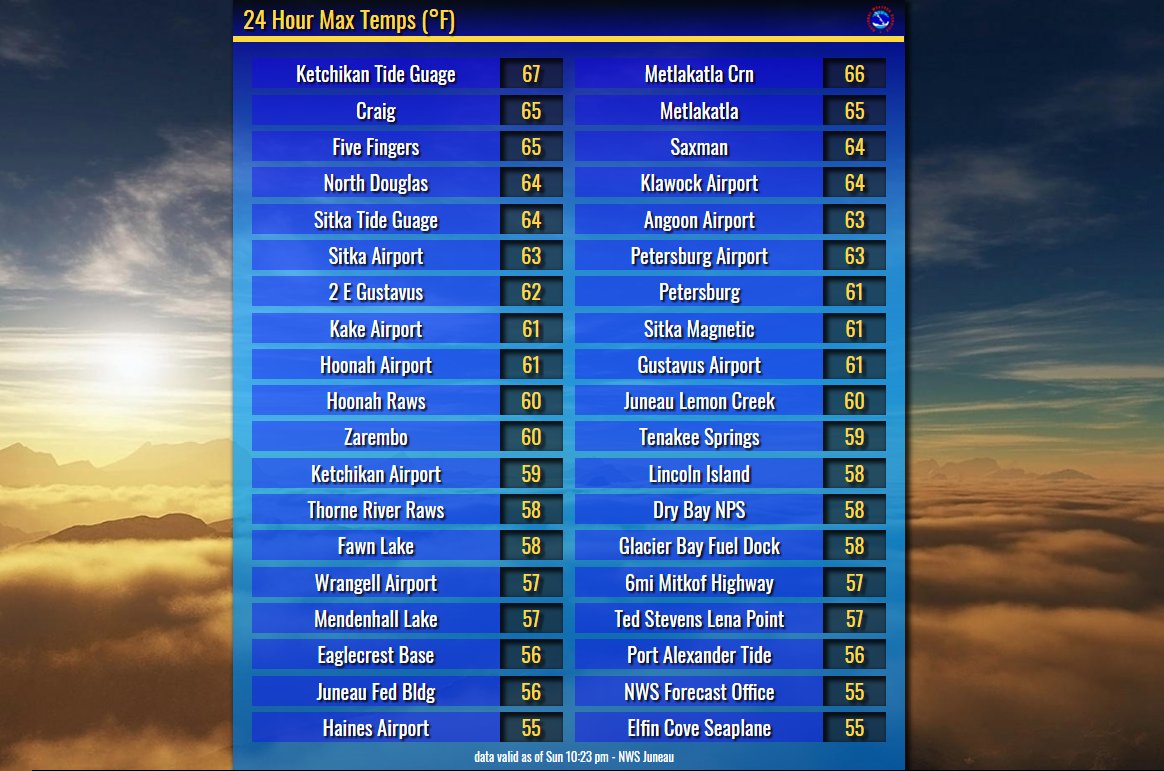 So far this winter, mainly due to the Dipole, we have this temperature pattern across the CONUS:

Tale of two-winters so far with the Rocky Mountains in between … very warm vs. very cold halves of the Lower 48.  Dec 1 – Jan 14 temperature anomalies for 2017-18 Winter (PRISM data)

After another cold shot bringing more snow to the South there will be a rapid warmup in the Plains and Midwest Friday the 19th:

I’ll add more data and reword my MLK essay per any suggestions as the day progresses.