Not many people know that besides bleaching coral, global warming decreases oxygen levels in the planet’s oceans enlarging dead zones. New research into how global warming plays a role with dead or “sick” zones was published in a new paper via Science. I’m going to quote and make some references from the following press release:

I do want to emphasize this, as well: “In areas traditionally called “dead zones,” like those in Chesapeake Bay and the Gulf of Mexico, oxygen plummets to levels so low many animals suffocate and die. As fish avoid these zones, their habitats shrink and they become more vulnerable to predators or fishing. But the problem goes far beyond “dead zones,” the authors point out. Even smaller oxygen declines can stunt growth in animals, hinder reproduction and lead to disease or even death. Low oxygen also can trigger the release of dangerous chemicals such as nitrous oxide, a greenhouse gas up to 300 times more powerful than carbon dioxide, and toxic hydrogen sulfide.”

From the article: “Climate change is the key culprit in the open ocean. Warming surface waters make it harder for oxygen to reach the ocean interior. Furthermore, as the ocean as a whole gets warmer, it holds less oxygen. In coastal waters, excess nutrient pollution from land creates algal blooms, which drain oxygen as they die and decompose. In an unfortunate twist, animals also need more oxygen in warmer waters, even as it is disappearing.”

Low-oxygen zones are spreading around the globe. Red dots mark places on the coast where oxygen has plummeted to 2 milligrams per liter or less, and blue areas mark zones with the same low-oxygen levels in the open ocean. (Credit: GO2NE working group. Data from World Ocean Atlas 2013 and provided by R. J. Diaz)

So how do we stop this three headed monster? Here is the article’s three step solution:

Now all reading have more reasons to go to green energy, getting away from carbon based systems ASAP.

Dear Diary. Uh Oh! We have an ET alert today from Daniel Swain. Some sneaky record warmth has made an appearance along the West Coast:

Another day of record-breaking warmth along North American West Coast. In fact, some stations in coastal Alaska are breaking all-time monthly January records at the moment. #CAwwx #ORwx #WAwx #AKwx 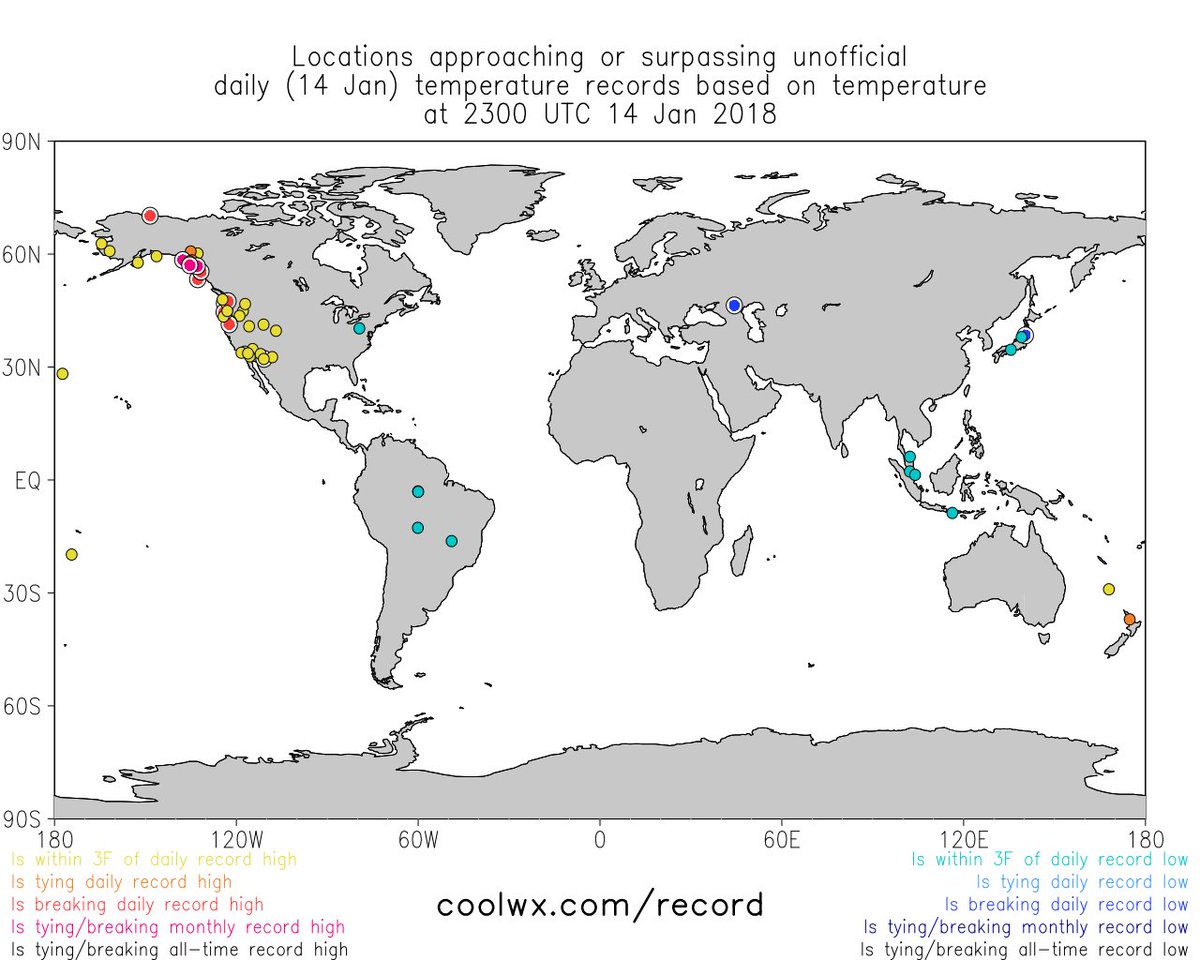