Saturday February 3rd… Dear Diary. The main purpose of this ongoing post will be to track United States extreme or record temperatures related to climate change. Any reports I see of ETs will be listed below the main topic of the day. I’ll refer to extreme temperatures as ETs (not extraterrestrials)😊. Here is today’s climate change related topic:

The Streak Is Over

I was wondering when this thing would end, if ever, in my lifetime.  After 37 months since December 2014 the streak of more record daily record highs than lows per month is finally over as reported in the NCEI database. The stars aligned, or rather, a strong dipole pattern over North America developed to produce a colder than average month east of the Rockies in January 2018. Here is my current “Record Scoreboard:”

Notice that you have to go back to November 2014 to see another blue or cold month. The second longest streak in the NCEI database was 19 months from March 2011 to September 2012. For more on long, monthly record streaks and temperature averages see: https://guyonclimate.com/2017/04/09/streaking-past-a-tipping-point/

Interestingly, 2013 and 2014 were years in which the dipole pattern dominated over North America producing a couple of relatively cool years for the U.S. and continuing the drought in California. Will we see a return to the conditions of 2013/14 across the U.S. in 2018 or is January 2018 an anomalous break?

Certainly the U.S. was warmed from a near record El Nino starting in 2015. I’m going to contend that the “tipping point” in which we don’t see any more cold months like January 2018 will be when global averages exceed +1.3C above preindustrial levels for good (or at least the next few centuries):

The 2017 global averages cooled very slightly to just under +1.2C above those of the preindustrial level.

As far as those ET reports go today: 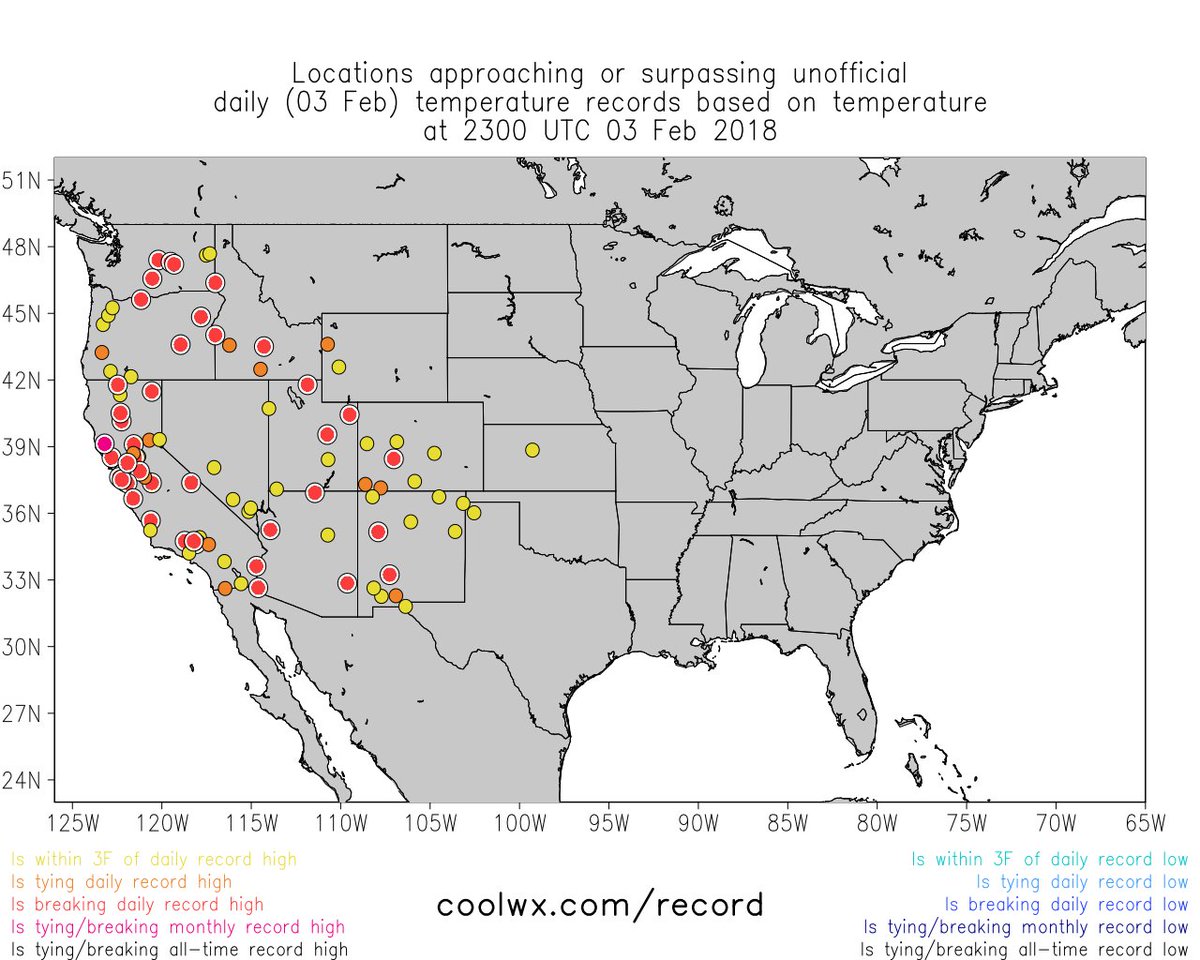 A RECORD HIGH TEMPERATURE OF 81 DEGREES WAS SET AT PASO ROBLES AIRPORT CA TODAY.
THIS BREAKS THE OLD RECORD OF 78 SET IN 1995.

Ten record highs set or tied today from the #BayArea south to Monterey County. Highs today were as much as 15-20 degrees warmer than normal and closer to what we’d expect in late Spring. #CAwx #BayAreaWx 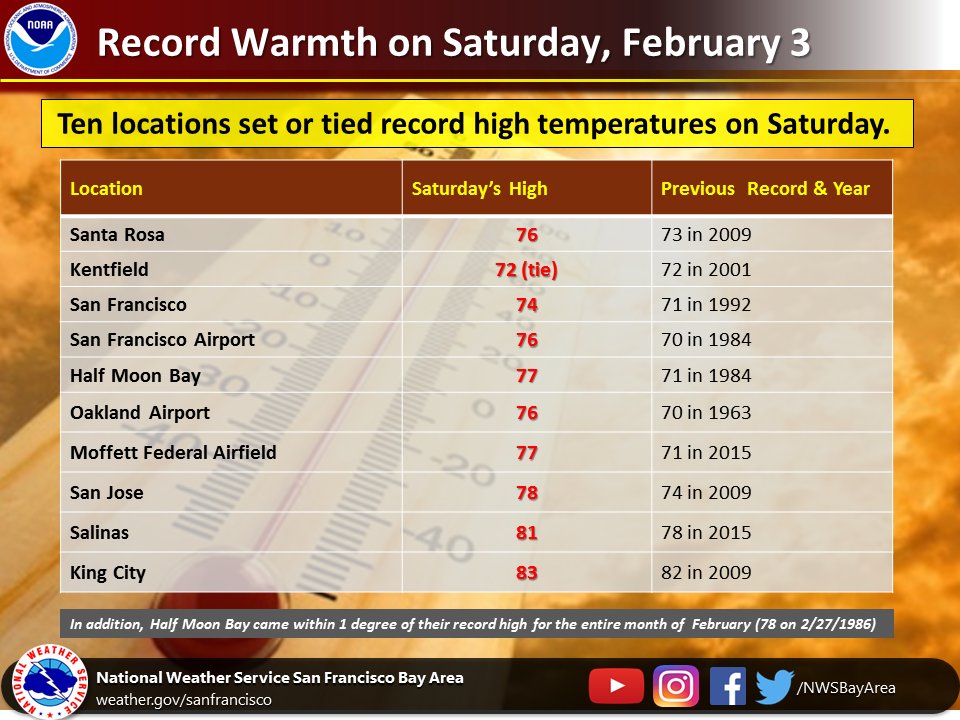 A high was 91 degrees in Palm Springs today breaking the old daily #record of 90 in 1963. This is also tied for the #hottest #February day in #PalmSprings since 1996.

We set new daily records today at all of our climate sites. Highs ran 15-25 degrees above normal. #CAwx 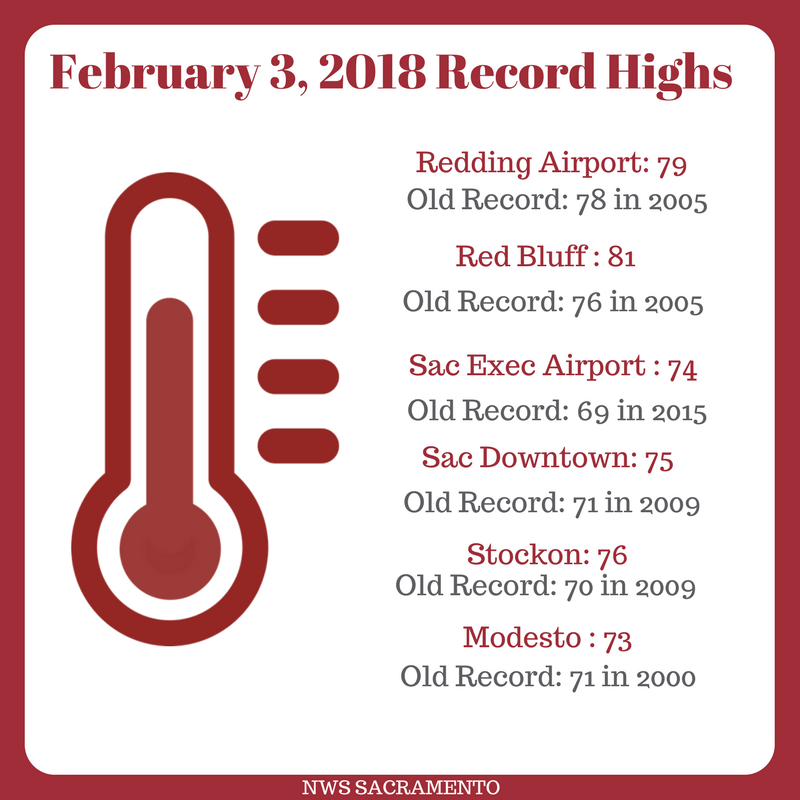 I’ll add more to this post later this evening as relevant items cross my radar.

One thought on “Extreme Temperature Diary-February 3, 2018/ Topic: The Streak Is Over”