Wednesday February 7th… Dear Diary. The main purpose of this ongoing post will be to track United States extreme or record temperatures related to climate change. Any reports I see of ETs will be listed below the main topic of the day. I’ll refer to extreme temperatures as ETs (not extraterrestrials)😊. Here is today’s climate change related topic:

Today I will raise more infrastructure questions continuing where we left off yesterday.  I will make references to this article: https://www.eenews.net/stories/1060072725

Question 3. How much should be done and spent on shoring up our shores?

This depends on how fast and how much sea level will rise this century and beyond. We should look to the Netherlands to mirror what they have done against the sea, but realize that great swaths of land will eventually go underwater no matter what we do. This is particularly true in south Florida and southern Louisiana. So, for long term plans money should not be wasted to save beach front property for just a couple of decades. Plans should be made to relocate population centers away from the coast.

Inland along rivers levees controlling flooding should be built using the latest technology. Quoting from the article:

“Some of our [water] infrastructure, frankly, is an international joke,” said Ed Thomas, president of the National Hazard Mitigation Association.

“Our levees, such as they are, meet no known standard of engineering excellence in the civilized world,” he said.

There are about 30,000 miles of levees in the United States, and only about 12,000 are in good shape. Often, farmers would throw up dirt mounds to protect their fields — and as the years passed, those farms became subdivisions without any fortifications to the levees.

One tactic that has worked in southern Louisiana is to elevate roads so they can serve as levees, too — essentially knocking out two infrastructure projects at a reduced cost, said Michael Hecht, president of the regional economic development organization Greater New Orleans Inc.

Question 4. Do dollars get spent on energy infrastructure?

I frowned when I read this from the article:

Energy companies see the potential for an infrastructure push to make it easier for pipelines to earn permits — especially in the Northeast, where local opposition has played a role in halting development.

The American Petroleum Institute has pitched pipelines as infrastructure projects that need zero public investment. And lawmakers from energy-rich states have been eager to open more markets for their states’ commodities.

After the State of the Union, Sen. John Barrasso (R-Wyo.) mentioned that energy infrastructure could have a role in the president’s plan.

Any money spent should not support fossil fuel infrastructure period. That includes pipelines, refineries and ports. What we need to build are high capacity electrical storage facilities to hold all the juice from solar and wind farms. Also, we need to build efficient power lines extending from any green facilities to homes and businesses taking coal powered plants offline in the process.

Question 5. What about airports?

Money should be sent to mirror what has happened at Boston Logan airport. From the article:

Boston Logan proved to be one of the leaders in green initiatives with the first LEED certified airport terminal in the U.S. In addition, the airport has wind turbines and solar panels. More recently, the gates at BOS were outfitted with aircraft plug-in power options at each gate so that airplanes don’t have to run the auxiliary power units as much while located at the gate.

Also, Boston has paved runways with an environmentally-friendly asphalt mix, which according to the article, has cut CO2 emissions dramatically.

If you, the reader, can think of more infrastructure questions just drop me a note.

I’ll add record ET reports if they cross my radar later today. Here is what I see so far:

Eric Fisher‏Verified account @ericfisher
The streak of warmth in California is ridiculous. San Francisco in the 70s every day so far this month with record highs on the 2nd, 3rd, 4th, 5th, 6th. 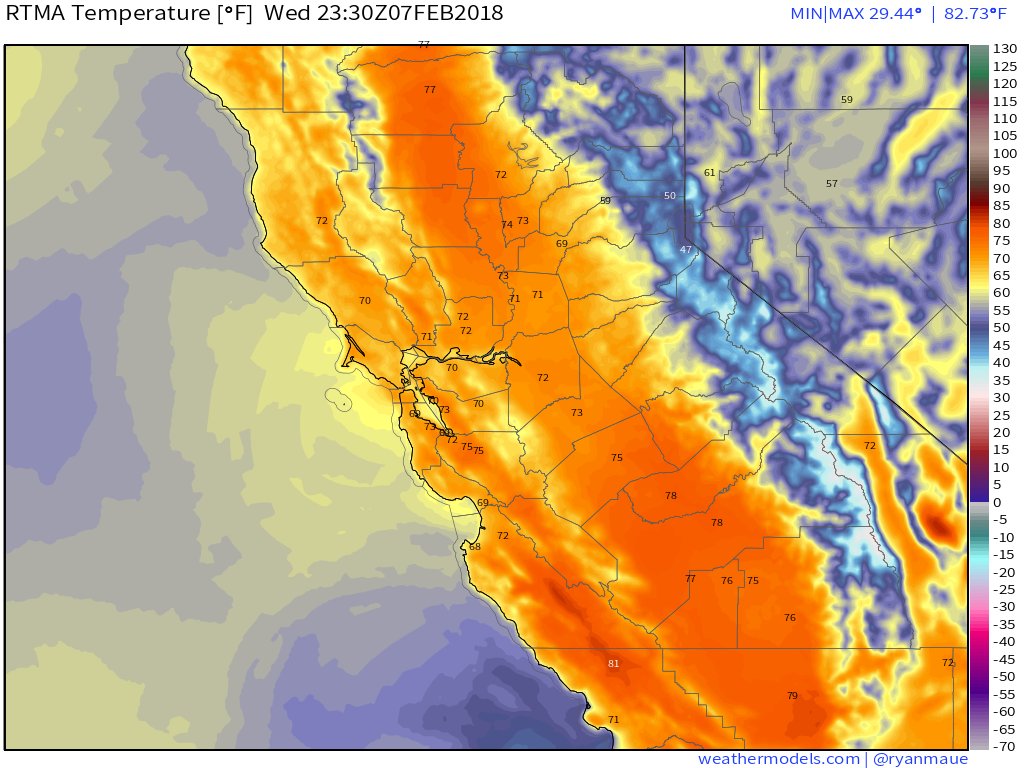