Thursday February 15th… Dear Diary. The main purpose of this ongoing post will be to track United States extreme or record temperatures related to climate change. Any reports I see of ETs will be listed below the main topic of the day. I’ll refer to extreme temperatures as ETs (not extraterrestrials)😊. Here is today’s climate change related topic:  (If you like these posts and my work please contribute via the PayPal widget, which has recently been added to this site. Thanks in advance for any support.)

Usually on these posts I don’t want to be a mere copy cat just regurgitating what others have already written on a climate related subject, but today I feel I must. The top climate news of this week is a new climate study on sea level rise that has narrowed down how much water will be lapping at receding shores by the year 2100. In prior posts I’ve indicated that researchers will be refining forecasts of global temperature averages and sea level rise, and sure enough what I’m seeing this week confirms my expectations. Dr. Jeff Masters has written an excellent post on the new study that I would like all to read, which I will be referring to here:

First let’s see an overview of the study from NASA:

(Global sea level rise is accelerating incrementally over time rather than increasing at a steady rate, as previously thought, according to a new study based on 25 years of NASA and European satellite data.)

Based on observations the rate of sea level rise has been increasing as noted here:

“The variation in the rate of sea level rise from 1993 – 2017 (thick red line, with error bars shown in thinner lines), as computed from data from the University of Colorado Sea Level Research Group by statistician Grant Foster in his Open Mind blog. He finds that the average rate is 3.1 mm/y, but the present rate is closer to 4.8 mm/y. His estimates are based on the raw data, and do not remove the estimated influence of the natural El Niño/La Niña and Pacific Decadal Oscillation (PDO) cycles, or effect of the Mt. Pinatubo volcanic eruption in 1991. The leveling off of the curve at the end is due to the 2015/2016 El Niño event; if that influence were to be removed, sea level rise would be seen to still be accelerating.”

Here are the bottom line findings from the new study as quoted by the Weather Underground article: If this acceleration were to continue through the end of the century, global sea level rise between 2005 and 2100 would be about 26 inches (65 centimeters), which is more than double the rise of 11 inches (28 centimeters) that would occur if sea level rise stayed constant at 3 mm/yr. (That’s about two feet folks.)

Acceleration in sea level rise is something climate models have long predicted, but it is a Scooby-Doo “Ruh-Roh” moment to see it present itself so early this century. Sea level rise is going to cause massive upheavals to civilization in coming decades, forcing millions of people to abandon the coast as rising seas invade cities, knock out transportation systems and sewage treatment plants, swallow prime agricultural land and barrier islands, and infiltrate aquifers with salt water.

But the impacts of sea level rise are not limited to future decades—they’re happening right in front of us, right now. Hurricane Sandy’s storm surge in New York City in 2012 caused an extra $2 billion in damage, due to the higher water levels the city experienced due to sea level rise over the 20th century. “Nuisance” flooding has become a growing problem in places like Miami Beach, Norfolk and San Francisco. For example, in Maryland, both Annapolis and Baltimore now get more than nine times the number of flood days they experienced in the 1960s. I review many more examples in my December review of Jeff Goodell’s new must-read book on sea level rise,The Water Will Come: Rising Seas, Sinking Cities, and the Remaking of the Civilized World. In response to the news that a long-predicted acceleration of sea level is already underway, we should heed the words of Duke University sea level rise expert Dr. Orrin Pilkey and co-authors in their excellent 2016 book, Retreat From a Rising Sea; Hard Choices in an Age of Climate Change:

“Like it or not, we will retreat from most of the world’s non-urban shorelines in the not very distant future. Our retreat options can be characterized as either difficult or catastrophic. We can plan now and retreat in a strategic and calculated fashion, or we can worry about it later and retreat in tactical disarray in response to devastating storms. In other words, we can walk away methodically, or we can flee in panic.”

I’ll add that global temperature averages are strongly linked to the rate and magnitude of sea level rise due to the meting of Arctic and Antarctic ice. Also today in the news we have found very little change with the “planet’s fever:”

January 2018 clocked in as the fifth-warmest January on record for the world, including temperatures more than 8°F above normal in the Arctic 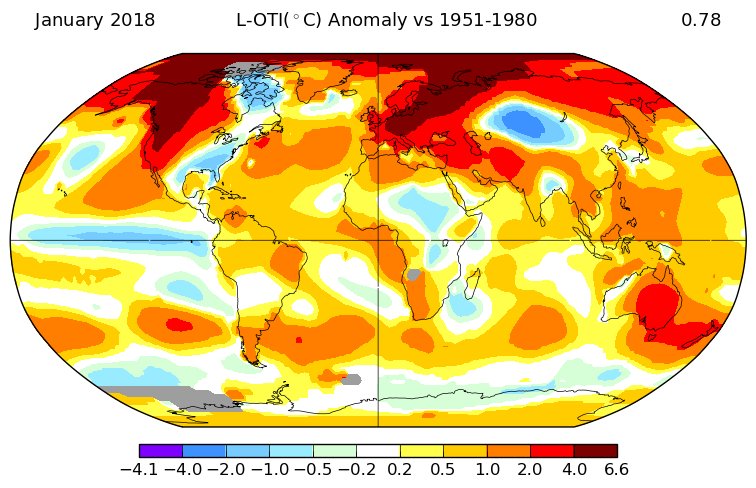 I’ll add ET reports should I see them later today.

We should see a warm pattern in the East the next week where some records should fall:

Multiple waves of unseasonably warm air means highs in the 60s and 70s across most of the East from now until early March. That's about 15-20°+ warmer than normal for this time of year.

Another early spring on the way. pic.twitter.com/a4tSpTLOXR