Tuesday February 20th… Dear Diary. The main purpose of this ongoing post will be to track United States extreme or record temperatures related to climate change. Any reports I see of ETs will be listed below the main topic of the day. I’ll refer to extreme temperatures as ETs (not extraterrestrials)😊. Here is today’s climate change related topic:

February Flood of 2018 Day One

Why would a weather event, such as a flood in February, be a climate change related topic? Can the old Climate Guy prove attribution? In this case absolutely! A synoptic pattern in which there may be significantly flooding has already developed over the eastern and central states inducive for flooding, but I’ve not heard of a catastrophe yet. What set’s this U.S. potential historic flood apart from any others that might occur in late February?

To start peeling back the onion of complicated weather events  most meteorologists will turn to 500 milibar geopotential heights and patterns. Right off the bat I see a red flag off the Southeast-Atlantic Coast…a record highest height anomaly near 596 decameters:

Here is Peter Mullinax’s  confirmation from this morning:

Morehead City, NC observed 500mb on this morning’s sounding at 5,930 meters. That is the highest on record for February & the next highest going into spring that was observed there occurred in late May. #ncwx 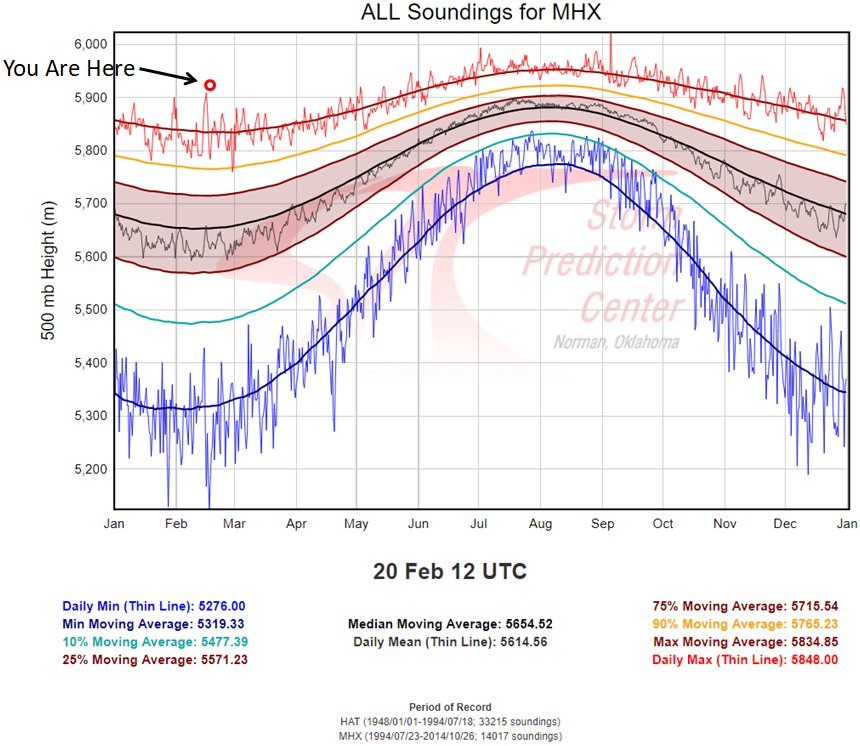 Ridges that exceed 590 decameters in summer are impressive.  The current ridge analyzed at exceeding 590 dm in the Southeastern US in February is totally nuts! 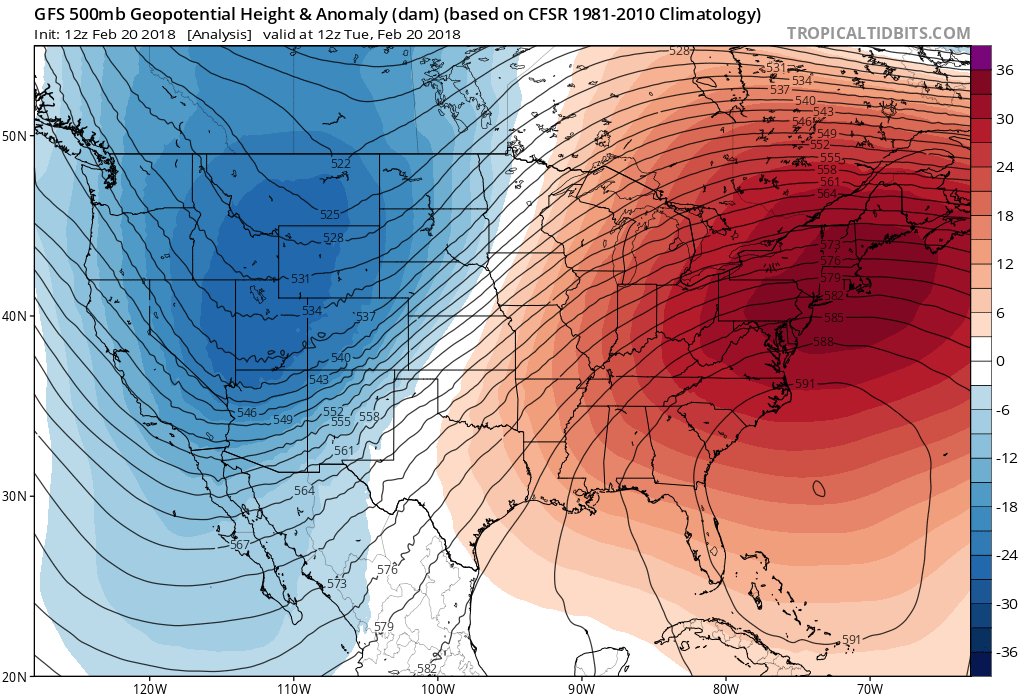 During the winter blocking ridges of high pressure are usually relatively weak allowing  fronts to zip across the nation. Flooding across the nation’s heartland is mostly associated with stationary fronts during the cold months, but these usually start to move after a day or two. Still, during a one to two day period even in winter flooding can occur along a stalled or slow moving front. The one in the Midwest this time around won’t move for days. Think of high, blocking heights as the skin of a balloon, and cold, polar air masses what’s contained inside of that balloon. Climate change, via more warming aloft is making the skin of these balloons thicker, slowing down cold air masses trying to escape, which is slowing down fronts.

Secondly, at the surface ahead of this particular front that has become stationary there will be plenty of record heat up and down the East Coast, and likewise high moisture content in the atmosphere to be wrung out along the boundary:

High temperatures compared to normal on Tuesday range from 40°F below / to 40°F above normal on either side of the Arctic front.  Definition of an “amplified” pattern across the Lower 48.

I typically post records (or ETs) at the end of each daily topic, but I’m making an exception today to emphasize how warm this air mass is for this time of the year here is what we saw today:

An exceptionally warm day across the Eastern US today, with numerous record high temperatures for February 20th broken or tied. A number of locations set or tied new record highs for any day in February. 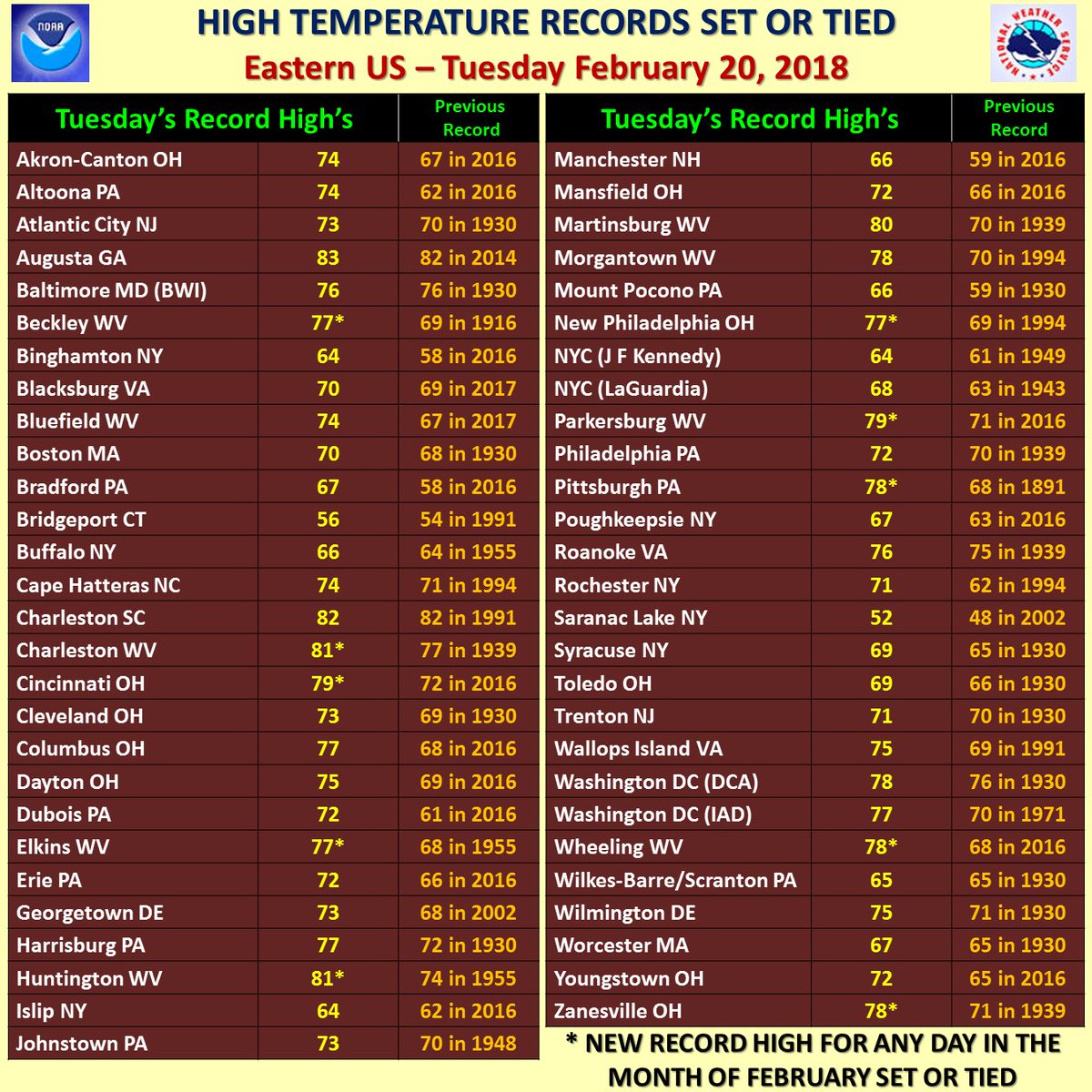 2:59 PM – 20 Feb 2018
We will be seeing record warmth and very high precipitable water values in the East through this weekend. All in all after many rounds of precipitation some places along the frontal zone may pick up close to a foot of rain:

This is an atypical flood event. Great Lakes and Ohio Valley are predicting worse river flooding than areas getting 2x the rain in East Texas and #Arkansas. The reason? Frozen soil dramatically increases runoff & recent snow-melt adding to heights too. #flooding 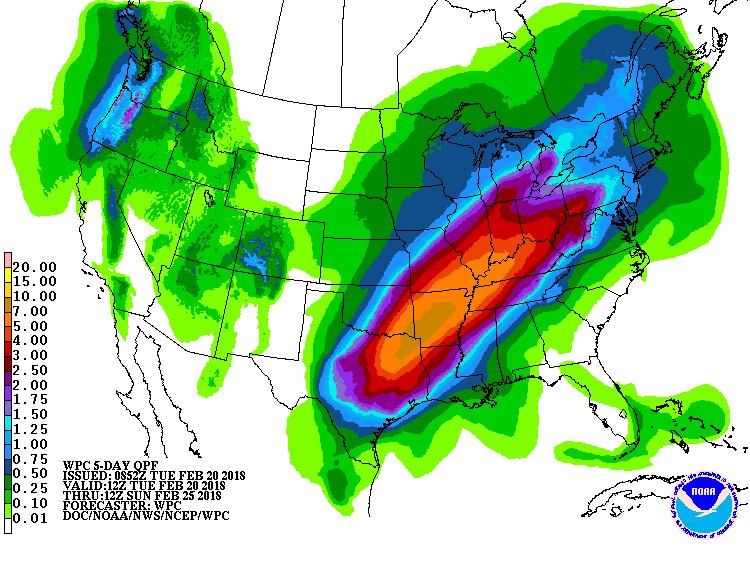 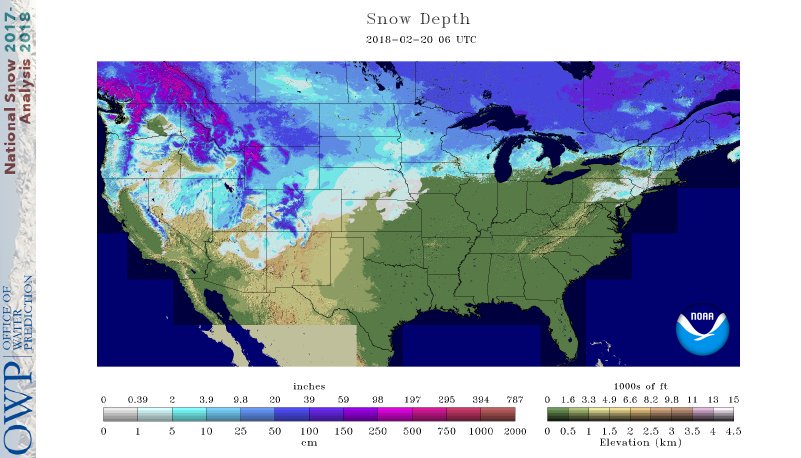 5:51 AM – 20 Feb 2018
If anything I suspect models are underdone with rainfall amounts in some locations. Already we see quite the large area of flash flood watches (in green) near the front:

Also denoted in blue there are winter storm warnings from the Plains into the Midwest for any icy mess. I would not be surprised to learn of several inches of ice covering some location. I’m not going to definitively write that we will see another 100+ year flood, but all the ingredients are coming together for a major precipitation event.
………………………………………………………………………………………………………
I’ll be posting cold ET reports for 2/20/18 from the West here as I see them later this evening. Here is what we have so far:

After multiple days of record highs at the start the month, today we transitioned to record cold temperatures. #CAwx #bayareawx #brrr 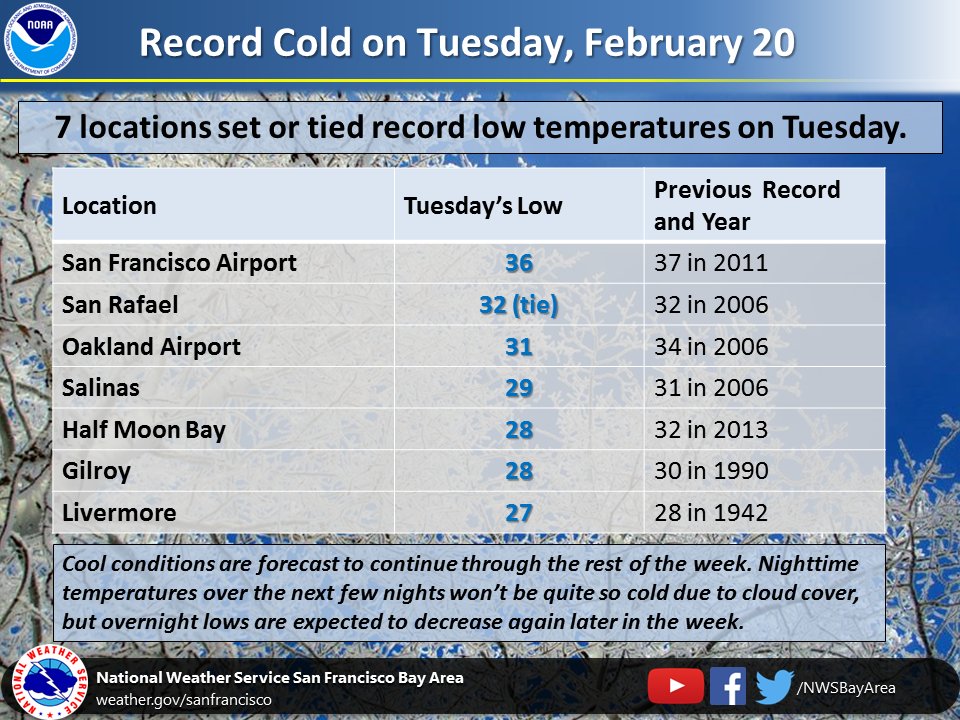 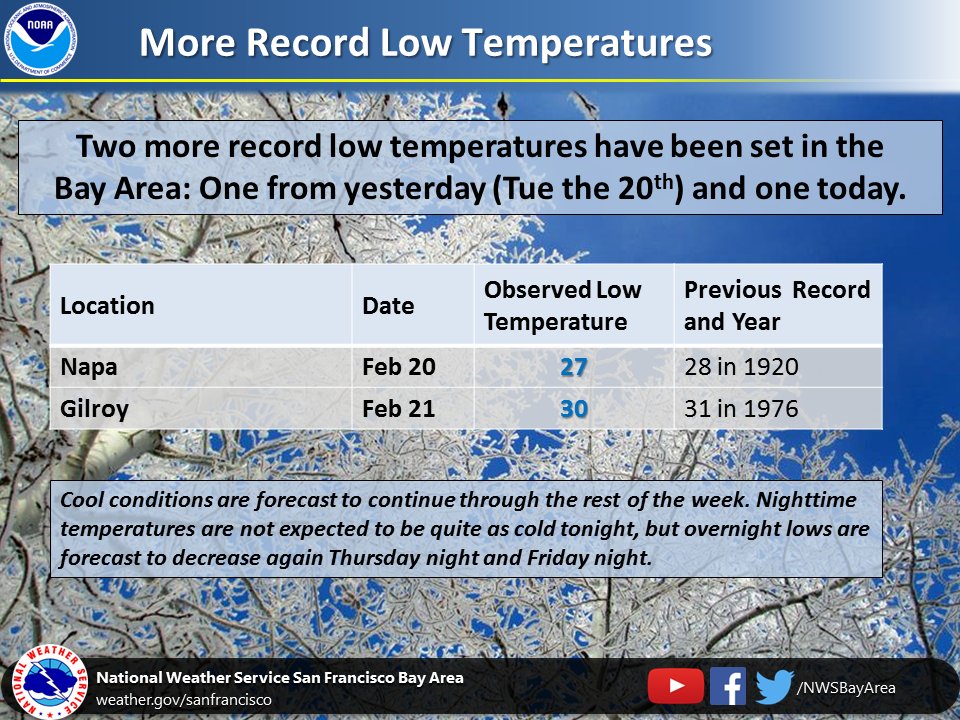 In a nice (I guess?) change of pace from most of our records so far this winter we actually had some cold temperature records today. Our Alta observer reported a high of only 5 degrees today! #utwx 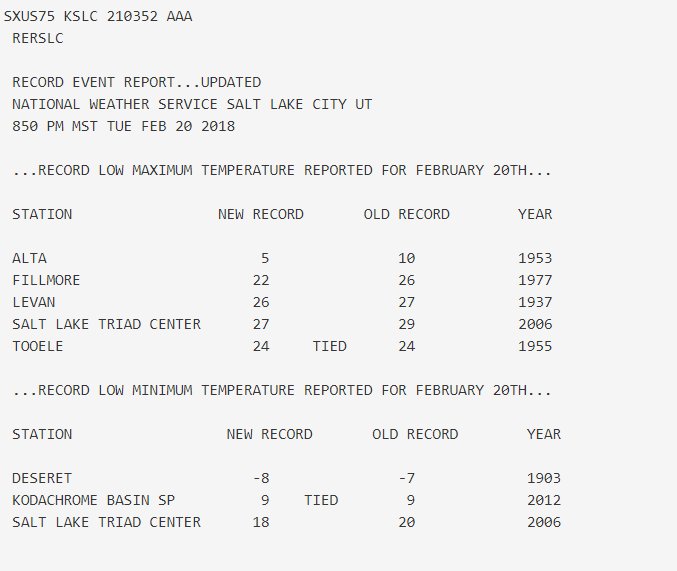