Sunday February 25th… Dear Diary. The main purpose of this ongoing post will be to track United States extreme or record temperatures related to climate change. Any reports I see of ETs will be listed below the main topic of the day. I’ll refer to extreme temperatures as ETs (not extraterrestrials)😊. Here is today’s main climate change related topic:  The Sick Vortex

Sometimes I don’t see much strange weather that can be tied to climate change for a few weeks. This has not been one of those times during February 2018. We’ve recently seen a mega ridge build across the East and South in the United States with many warm and wet ramifications east of the Rockies, which I’ve been blogging on the last five days. Now on social media climate scientists have let all know about exceptional warmth building towards the North Pole is causing the jet stream to kink in “weird” ways not fitting with historic climatology. What we are beginning to see this decade during the winter is what I’ll term the “Sick Vortex.”

Back in the winter of 2013 the words “polar vortex” began to be bandied about in reference to colder than average intrusions of air. The winter of 2013 was a cold one for the United States. Social media keyed on what really were extensions, or lobes of the circumpolar vortex digging the jet into the continental United States ushering in arctic air. The polar vortex, which has been around in the meteorological lexicon for decades, is an area of low pressure generally located above each of the planet’s polar regions containing a mass of extremely cold air. The colder the air mass from the surface up to the 500 millibar level, or about half way up through the atmosphere, the stronger the vortex and its extensions ushering cold air southward towards lower latitudes. Now we are seeing more frequent intrusions of warm air northward to the Arctic, which I contend is due to climate change.  Here is a NASA article thoroughly showing how warming intrusions in the Arctic are becoming more frequent:

This week  the vortex is looking very strange to me as noted on this Penn State model ensemble chart:

On the chart valid for Friday 3/2/18 we see a big spike of red, or above average warmth, nosing from the Aleutians in Alaska northward towards the pole. The strongest warm anomaly, as noted be a purple blotch over Greenland, is a whopper and happens to be the strongest forecast negative North Atlantic Oscillation on record…..very eye opening from a climatological perspective going into early March:

Insight into the early March pattern via a record-setting -NAO, return of an active Great Lakes storm track, and cooler temperatures in the eastern US. #USwx #Energy #AGwx 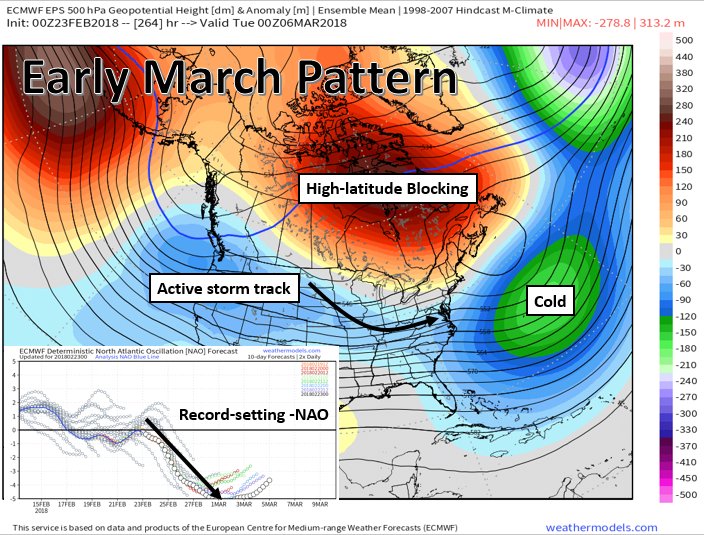 During late February many have noted extreme warmth heading poleward. Zack Labe is an Arctic researcher: 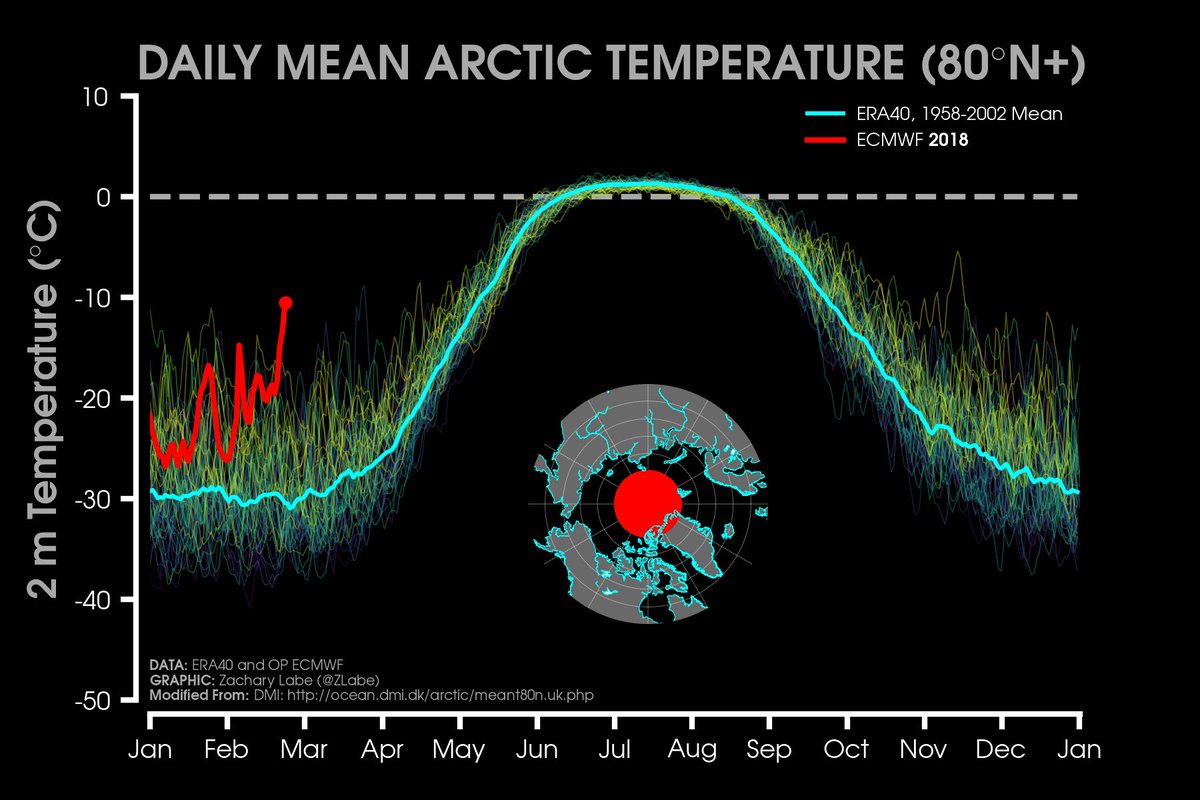 At this moment, the Arctic is at its warmest wintertime temperature ever measured. (between early November and late March)
A shocking sign of our Earth’s accelerating planetary fever. 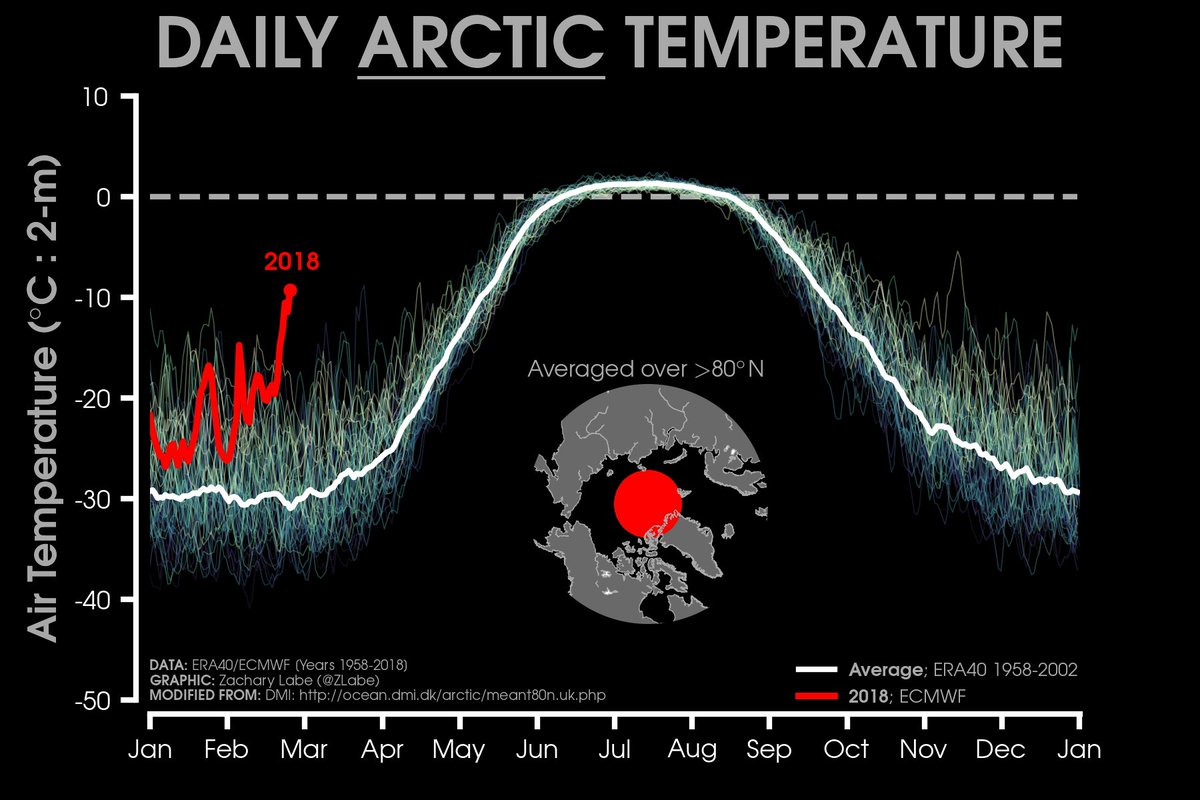 2018 is well exceeding previous years (thin lines) for the month of February. 2018 is the red line. Average temperature is in white…

Aarne Granlund is a climate researcher who lives in Finland. We exchanged this note:

AGW means Anthropogenic Global Warming, or human-caused climate change, or climate disruption, or weather weirding, or climate crisis. You know what the deal is. Everything is pretty strange at the moment so #ClimateAction must ensue.

Guy Walton @climateguyw
Replying to @AarneClimate @edgarrmcgregor and 2 others
All of these “strange” weather events across the northern hemisphere are interrelated with the amazing warmth going on near the pole. It’s almost as if the polar vortex is going through death throws struggling to remain in tact after being “infected” by AGW.  @MichaelEMann
9:52 AM – 24 Feb 2018 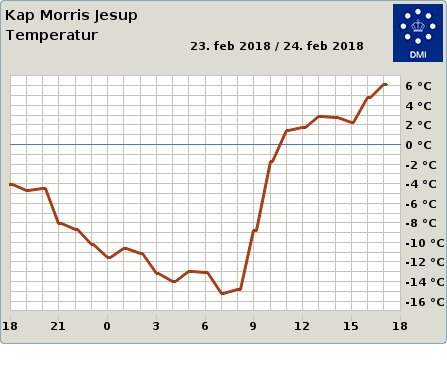 On Sunday morning the North Pole (Red dot) will be warmer than parts of Mexico. (Circled)   React how you wish. 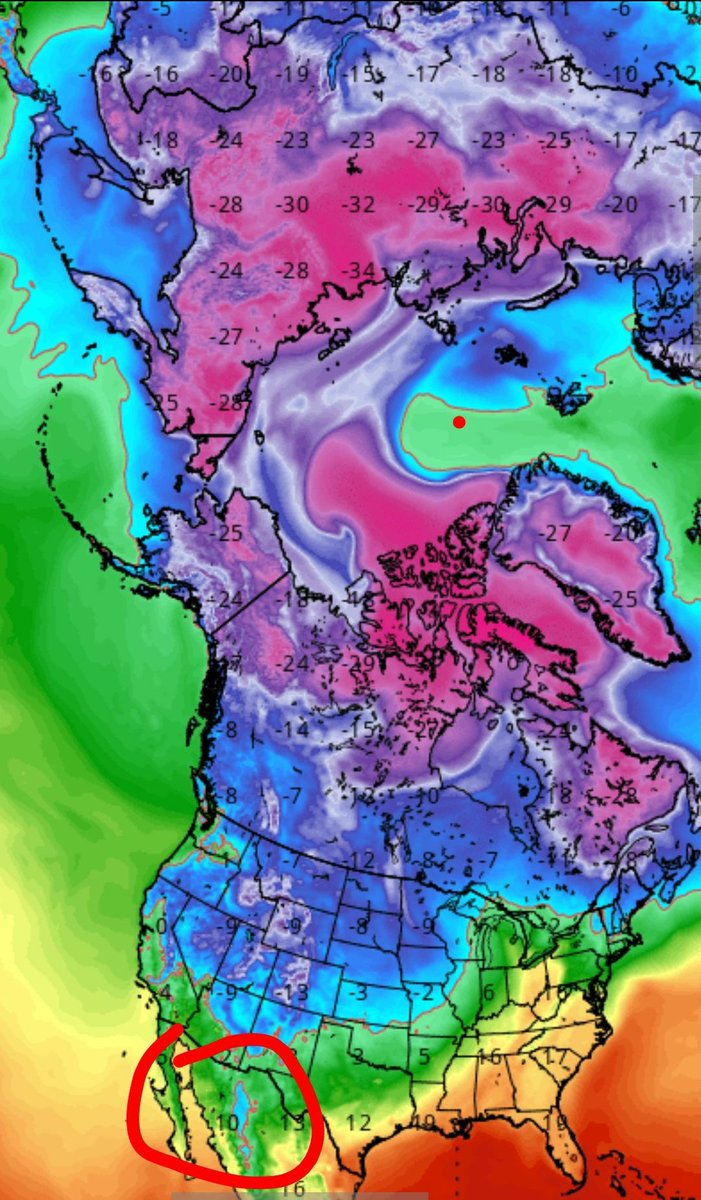 4:07 PM – 23 Feb 2018
What the warmth surging towards the pole is doing is pinching off remaining cold air and forcing the jet south resulting in frigid synoptic situations at some longitudes, such as in the most current case in Europe….The Beast from the East:

Remarkable forecast (from GFS model) shows most of Europe w/ subfreezing temps next Wed afternoon during most severe cold snap in years.  London in the 30s most of next week w/ snow poss Monday night & Tues. More info: http://wapo.st/2BNTXt9  (Mapped temps in Celsius) 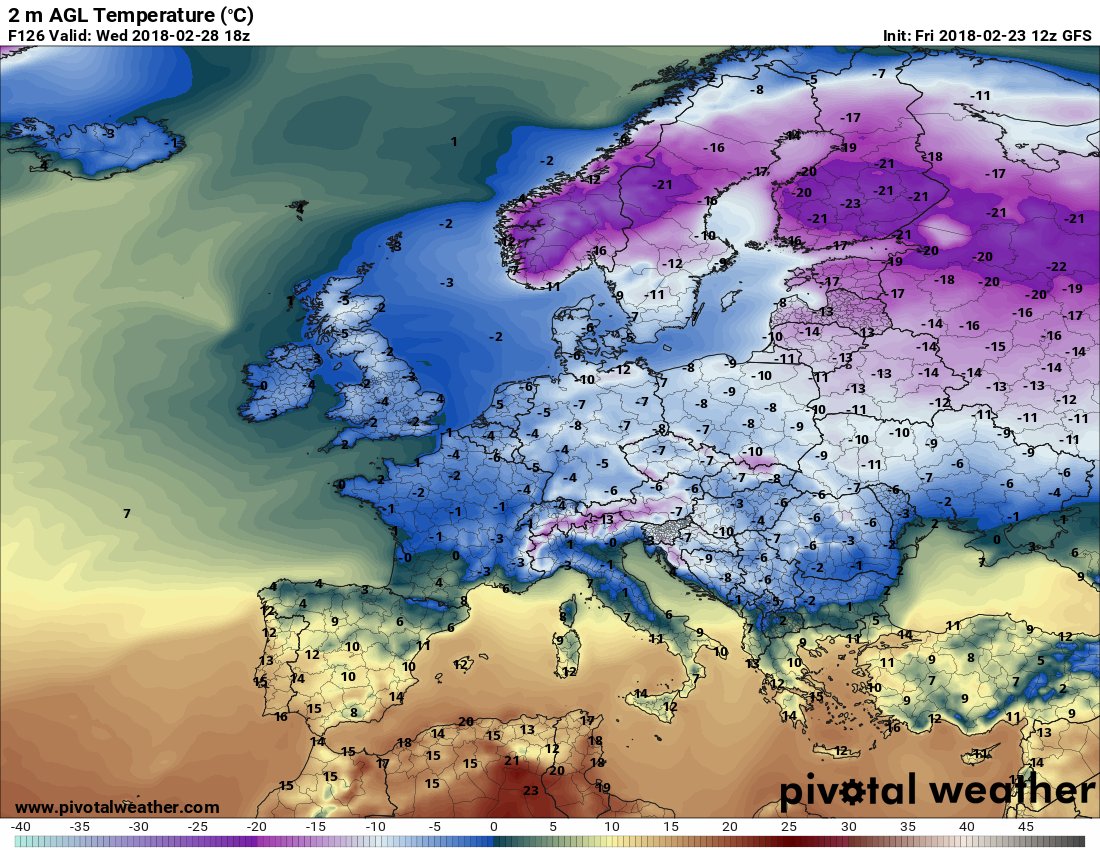 12:23 PM – 23 Feb 2018
The coming synoptic pattern is called “The Beast from the East” by social media in 2018 due to surface arctic high pressure building over Russia funneling cold air westward into Europe. Given the current state of the polar vortex sometimes a configuration of associated lobes can produce a cold pattern fooling some climate change deniers. Here is that Penn State chart again forecasting blue, cold anomalies pinched off in Europe south of the Arctic warmth:

Randall Gates is a climate communicator:

Winter turned upside down! As we watch Arctic temperatures spike to crazy levels, we can follow the southerly winds that are pumping heat into the Arctic. Note: the downside of this circulation is what will bring freezing temps to Europe. pic.twitter.com/7xdgAQASSN

The cold anomaly will be centered near Finland for a couple of days:

There is open water north of #Greenland where the thickest sea ice of the #Arctic used to be. It is not refreezing quickly because air temperatures are above zero confirmed by @dmidk‘s weather station #KapMorrisJesup. Wacky weather continues with scary strength and persistence.
12:36 AM – 25 Feb 2018
So, a lot of the weird weather that has been happening across the Northern Hemisphere in February going into March can be chalked up to carbon pollution. Granted, it’s not killing very many people now, but all of this warmth is symptomatic of a sick polar vortex with a fever. The fever will lead to more ice melt and sea level rise, eventually killing many due to stress on infrastructure and society at least potentially. Heed the warm warnings of early 2018.
The Climate Guy