Wednesday April 4th… Dear Diary. The main purpose of this ongoing post will be to track United States extreme or record temperatures related to climate change. Any reports I see of ETs will be listed below the main topic of the day. I’ll refer to extreme or record temperatures as ETs (not extraterrestrials)😊. Here is today’s main climate change related topic:

It’s long been debated how much cloudiness and what type of clouds affect global warming. A new article written by Dr. Marshall Shepherd from the University of Georgia let me know that NASA has been proactively busy investigating the cloud facet of climate change: https://www.forbes.com/sites/marshallshepherd/2018/03/28/how-you-and-the-kids-can-use-a-cellphone-to-help-nasa-study-clouds/#5886a197594d

Since this is important and Dr. Shepherd has done such a masterful job with this subject, I’m going to reprint most of his article:

Who doesn’t like to gaze at the clouds? I remember as a kid peering into the sky to name the types of clouds. Most elementary age students can rattle off cumulus, cirrus, nimbus, or stratus clouds pretty easily, but the reality is that there are far more cloud types. Clouds play very important roles in Earth’s weather-climate system. I will explain why in a moment. The National Aeronautics and Space Administration (NASA) needs your help making sure its advanced satellite interests are correctly measuring clouds. If you have a smartphone, you can become a “NASA scientific research assistant” for the months of March and April.

NASA partners with the the GLOBE Program each spring (March 15 to April 15) to engage a massive cohort of citizen scientists to conduct up to 10 cloud observations per day using the GLOBE Observer app. There are methods for other data entry options but you must be a trained GLOBE members. The GLOBE program is described on its website:

The Global Learning and Observations to Benefit the Environment (GLOBE) Program is an international science and education program that provides students and the public worldwide with the opportunity to participate in data collection and the scientific process, and contribute meaningfully to our understanding of the Earth system and global environment.  Announced by the U.S. Government on Earth Day in 1994, GLOBE launched its worldwide implementation in 1995.

Why does NASA care about clouds? To properly answer this question, it take more space than I have allotted. However, let’s see if I can capture the main reasons succinctly. Clouds play an important role in the energy balance of the planet. You may have noticed this, but if a day is particularly cloudy, temperatures are often cooler during the day. Oddly, cloud cover at night can often keep temperatures a bit warmer than if there were clear conditions. During the day, certain clouds can reflect shortwave energy because they have a high albedo (how reflective something is). However, at night, certain clouds can absorb and re-emit longwave energy back to the surface (as a part of a larger greenhouse effect along with greenhouse gases). We know the “greenhouse effect” is real because as Dr. Scott Denning of Colorado State University often says, “we survive night every night.” His point is that Earth would get too cold for us with out the “radiative blanket clouds and gases allow.” One of the uncertainties in climate science is what type of clouds will become more common as the atmosphere warms.  For example, NASA’s Earth Observatory website (a great resource by the way) point out,

In contrast to the warming effect of the higher clouds (like cirrus), low stratocumulus clouds (for example) act to cool the Earth system. Because lower clouds are much thicker than high cirrus clouds, they are not as transparent: they do not let as much solar energy reach the Earth’s surface. Instead, they reflect much of the solar energy back to space (their cloud albedo forcing is large).
Here is the diagram from Dr. Shepherd’s Forbes piece:

For decades, NASA has been placing the Clouds and the Earth’s Radiant Energy System (CERES) instrument experiment on satellites to measure clouds and their different types of heat properties. Before joining the faculty at the University of Georgia in 2006, I spent 12 years as a scientist at NASA Goddard Space Flight Center. One of the satellite missions that I worked on, the Tropical Rainfall Measuring Mission (TRMM), carried the first CERES and the most recent one was launched in 2017 on the NOAA JPSS-1. Long-term, uninterrupted observations are the only way to document and understand trends or changes on Earth.

Now back to how you can help NASA. According to Marilé Colón Robles, lead for the GLOBE Clouds team at NASA’s Langley Research Center in Hampton, Virginia,  “The GLOBE Program is offering this challenge to show people how important it is to NASA to have citizen scientist observations; observations from the ground up. Your observations are essentially helping NASA validate or confirm what the CERES experiment is measuring from space. This is important because from space, a cloud might be hard to distinguish from a snow-covered background, for example. The cloud observer in the Challenge with the most observations will actually receive a special recognition from NASA.

You do not need to be a cloud gazing professional to participate, but you do need the GLOBE Observer App, which can be downloaded at this link or on the various App stores for your phone. Get the App and as Colón Robles says,  “Just go outside.”

Essentially NASA is trying to determine through CERES and Earth bound observations how three parameters in association with clouds interact with the global radiation budget: 1) Level in atmosphere 2) thickness and 3) areal coverage. Measurements will be crucial determining how stable Earth’s climate is. Remember also as I keep harping any debate has shifted to how much and how soon, which clouds play a part. Here is the cloud chart included in the Forbes piece:

As a young up and coming met in Atlanta I noticed that we never had a day in which a record maximum was set with much if any cloudiness. I saw it get to 105F in 1980 under cobalt blue skies. Conversely record minimums were also set when the sky was clear at night, so clouds play a big role with those extreme temperature.

As an aside while reading this hmm… I wonder if the NASA app could be improved such that cloud types could be identified just by the user of a cell phone holding the thing up to the sky facing the cloud in question. It shouldn’t be too difficult for a cell phone camera to scan the sky then match what is up there with catalogued cloud types such as in the above chart. Such an app would really have a lot of meteorologists of all ages geeking out.

The cold team will be racking up a few hundred ET points through this weekend east of the Rockies mainly from the Midwest into the Northeast. Here is one example:

Winter in April continues across the north-central U.S., and it’s not leaving anytime soon.

NWS AberdeenVerified account @NWSAberdeen
Aberdeen’s temperature at the National Weather Service office has officially fallen to -6 this morning. Not only is this a new record low for April 4th, it is also a new record low for the month of April. #sdwx
7:07 AM – 4 Apr 2018 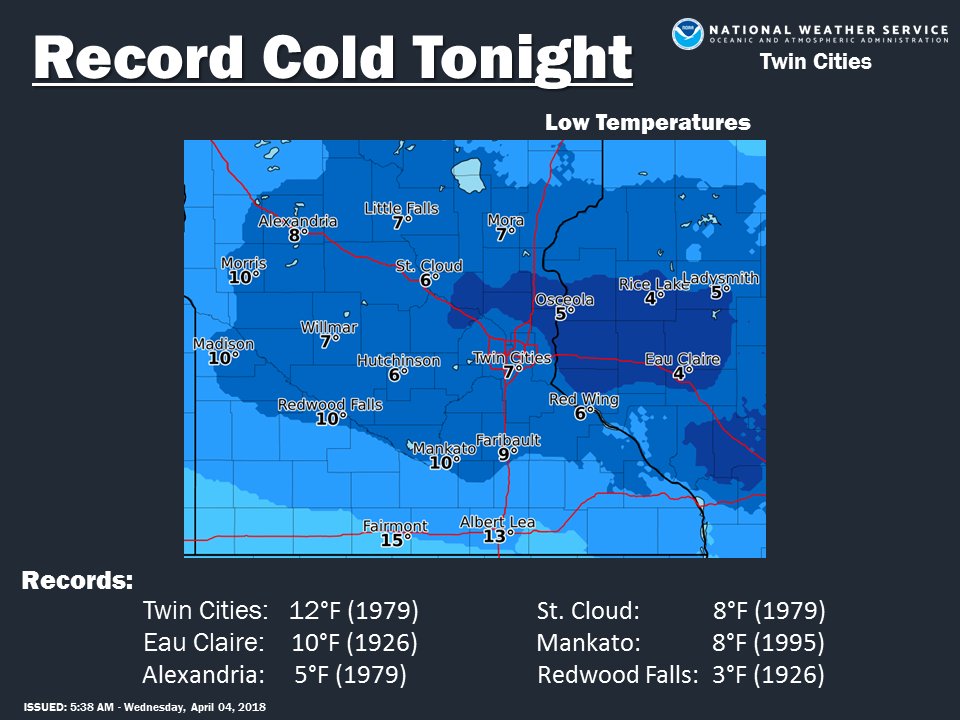