Tuesday April 3rd… Dear Diary. The main purpose of this ongoing post will be to track United States extreme or record temperatures related to climate change. Any reports I see of ETs will be listed below the main topic of the day. I’ll refer to extreme or record temperatures as ETs (not extraterrestrials)😊. Here is today’s main climate change related topic:

So far this year on this blog we’ve looked at extraordinary warmth over the Arctic with a lot of ramifications around the Northern Hemisphere. There are new concerns coming from the other side of the planet. A new article from Inside Climate News suggests that a worst case scenario for sea level rise is looking more plausible due to unstable Antarctic ice. As we all know any substantial sea level rise will come from the melting of Greenland and Antarctic old ice. This AAA won’t be an aid to jump civilization back onto the roadway of progress. Quite the opposite. Here is the main article I will be referring to:

Apparently Antarctic continental ice is in peril for more rapid melt than has been forecast on prior IPCC reports. When I was young watching ice melt off large rocks, some half submerged by water, it appeared that some melting was occurring where stone or concrete met the ice. Sometimes icy slabs would fall off stone. So, it makes sense to me that Antarctic ice, which sits on a stony continent, would become unstable, melting on buried rock as well as that closer to the surface of glaciers. Here are some quoted findings:

A new analysis of satellite data has found “extreme” changes underway at eight of Antarctica’s major glaciers, as unusually warm ocean water slips in under their ice shelves.

The warmer water is eating away at the glaciers’ icy grasp on the seafloor. As a result, the grounding line—where the ice last touches bedrock—has been receding by as much as 600 feet per year, a new study shows. Behind the grounding line, the land-based ice then speeds up, increasing the rate of sea level rise.

Here is the Inside Climate News animation showing some of the physical dynamic processes involved in the melting process:

For more details please read the artice in its entirety. Now it’s time for me to beat my poor, tired dead horse. The only debate left going forward through the 21st century will be how bad and how fast prior stable climate conditions will deteriorate. A worst case scenario for sea level rise if all potential polar ice melted would be: https://science.howstuffworks.com/environmental/earth/geophysics/question473.htm

The main ice covered landmass is Antarctica at the South Pole, with about 90 percent of the world’s ice (and 70 percent of its fresh water). Antarctica is covered with ice an average of 2,133 meters (7,000 feet) thick. If all of the Antarctic ice melted, sea levels around the world would rise about 61 meters (200 feet). But the average temperature in Antarctica is -37°C, so the ice there is in no danger of melting. In fact in most parts of the continent it never gets above freezing.

At the other end of the world, the North Pole, the ice is not nearly as thick as at the South Pole. The ice floats on the Arctic Ocean. If it melted sea levels would not be affecte­d.

There is a significant amount of ice covering Greenland, which would add another 7 meters (20 feet) to the oceans if it melted. Because Greenland is closer to the equator than Antarctica, the temperatures there are higher, so the ice is more likely to melt.

So, we get a grand total of 220 feet, which definitely would put humanity in a brave, new water world. Good news here, even in the gloomiest scenarios total ice melt would not occur for several hundred years if at all, so there is time to adapt. Remember that about 40% of the world’s populations live along the coasts, though, so a lot of adaption is in order. What would happen, though, if we saw 10 feet of sea level rise by 2100 with continued rise into the 22nd century? Obviously shores would be worse off than these Climate Central projections from 2-7 feet of rise: http://sealevel.climatecentral.org/ Most of Florida would be underwater.

We can already see discernable sea level rise across the globe. San Francisco is just one example: 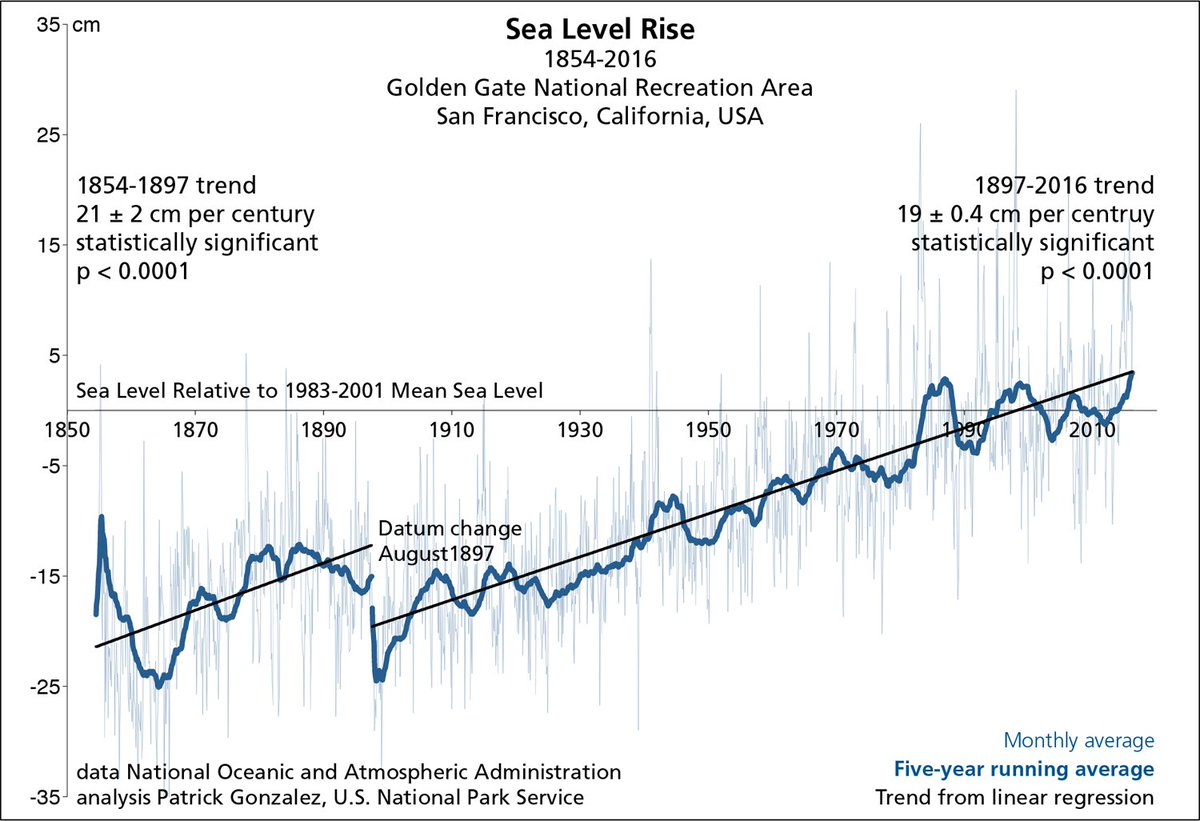 9:01 AM – 2 Apr 2018
So far we have seen very modest, steady sea level rise, but there are plenty of hints in Earth’s past when there has been more abrupt change when tremendous calving of old  glacial ice occurred. Here is what climate scientists will be looking for before sounding alarm bells:

A number of potential previously unidentified mechanisms that can account for large melt pulses.

Bob Kopp‏ @bobkopp
Most of what we’ve learned in the last half decade heightens a concern first raised in the 1970s about the potential for Antarctica to become unstable. At this point, the Antarctic drives considerable fat tail risk in sea level rise, particularly in high emissions future.
7:44 PM – 3 Apr 2018
Here are the bottom lines from today’s post: Failure to reign in fossil fuel use will doom coastal cities maybe sooner than predicted. Have we already failed? This author now thinks we have only a skinny 10% chance of righting the Titanic II before it strikes the “anti-ice” burg.
………………………………………………………………………………………………………………………………….
I have an ET alert today, but this one is from the cold team. Much below average air masses have been sliding from the Midwest into the Northeast recently. Another impressive shot of cold air in the wake of yet another late season winter storm will be moving into the Midwest by this weekend:

These temperatures are not April like. I would expect some records to fall anywhere from Montana to New York on Saturday.
(If you like these posts and my work please contribute via the PayPal widget, which has recently been added to this site. Thanks in advance for any support.)