Sunday April 8th… Dear Diary. The main purpose of this ongoing post will be to track United States extreme or record temperatures related to climate change. Any reports I see of ETs will be listed below the main topic of the day. I’ll refer to extreme or record temperatures as ETs (not extraterrestrials)😊. Here is today’s main climate change related topic:

I’ve been remiss not stating that global warming is not only a threat to humanity but for the entire biosphere as well. We know this from mass extinctions that occurred in Earth’s distant past when natural phenomena like volcanoes significantly raised the level of carbon in the atmosphere and thus temperature. Today I’ll be reporting about a new article linking levels of CO2 to eradication of many species:

The warning signs of mass extinction are also visible today.

The factors that led to a mass extinction at the end of the Permian Period remind us very much of today, says Prof. Wolfgang Kießling. “There is much evidence of severe global warming, ocean acidification, and a lack of oxygen. What separates us from the events of the past is the extent of these phenomena. For example, today’s increase in temperature is significantly lower than 250 million years ago.”

However, the warning signs that Wolfgang Kießling’s team found towards the end of the Permian Period can already be seen today. “The increased rate of extinction in all habitats we are currently observing is attributable to the direct influence of humans, such as destruction of habitat, over-fishing, and pollution. However, the dwarfing of animal species in the oceans in particular can be quite clearly attributed to climate change. We should take these signs very seriously.”

The devastating end-Permian mass extinction is widely considered to have been caused by large-scale and rapid greenhouse gas release by Siberian magmatism. Although the proximate extinction mechanisms are disputed, there is widespread agreement that a major extinction pulse occurred immediately below the biostratigraphically defined Permian–Triassic boundary. Our statistical analyses of stratigraphic confidence intervals do not comply with a single end-Permian extinction pulse of ammonoids in Iran. High turnover rates and extinction pulses are observed over the last 700 k.y. of the Permian period in two widely separated sections representative of a larger area. Analyses of body sizes and morphological complexity support a gradual decline over the same interval. Similar pre–mass extinction declines and disturbances of the carbon cycle have sometimes been reported from other regions, suggesting a widespread, but often overlooked, environmental deterioration at a global scale, well before the traditional main extinction pulse.
What we’ve essentially learned from the study is that A) the Earths temperatures were a lot higher than at the end of the Permian Epoch 250 million years ago and B) the transition from the Permian to Triassic period took longer than previously thought, perhaps as long as 700,000 years. In other words species held out longer before conditions overwhelmed them and at higher temperatures than in todays climate. The estimated CO2 release was 100,000 Gigatons, and temperature increase 5-6C from Siberian mega volcanic eruptions. As the planet naturally slowly cooled down and oxygen levels recovered the Triassic Epoch began, the age of dinosaurs.
We have a strong warning here, though. We are changing the state of the atmosphere much faster than what occurred 250 million years ago from massive volcanic eruptions. Yes, if the planet got hot enough only some single cell organisms, a few plants, mollusks and perhaps some fish might survive, but we have a chance to prevent such a catastrophe. From what I’ve read CO2 levels would need to climb above 1000 parts per million for a Permian/Triassic type extinction to take place. Surly we can prevent that.

Here is an example of today’s animal species not adapting well to climate change:

A new international study out of the University of Edinburgh, with key input from Canadian researchers, has shown that seabirds are not adapting to warming sea surface temperatures caused by climate change.

The study, which was published in the scientific journal Nature Climate Change, looks at more than 60 species of seabirds from 145 populations around the world with data going back to the 1950s.

Although rising temperatures show that food sources like plankton, insects and vegetation have been appearing earlier each year, seabird populations are not matching up their breeding and nesting patterns to adapt with this change.

Heed the warnings, demand changes to your energy diet.

Wow! It was extremely cold in the Midwest during the first week of April: 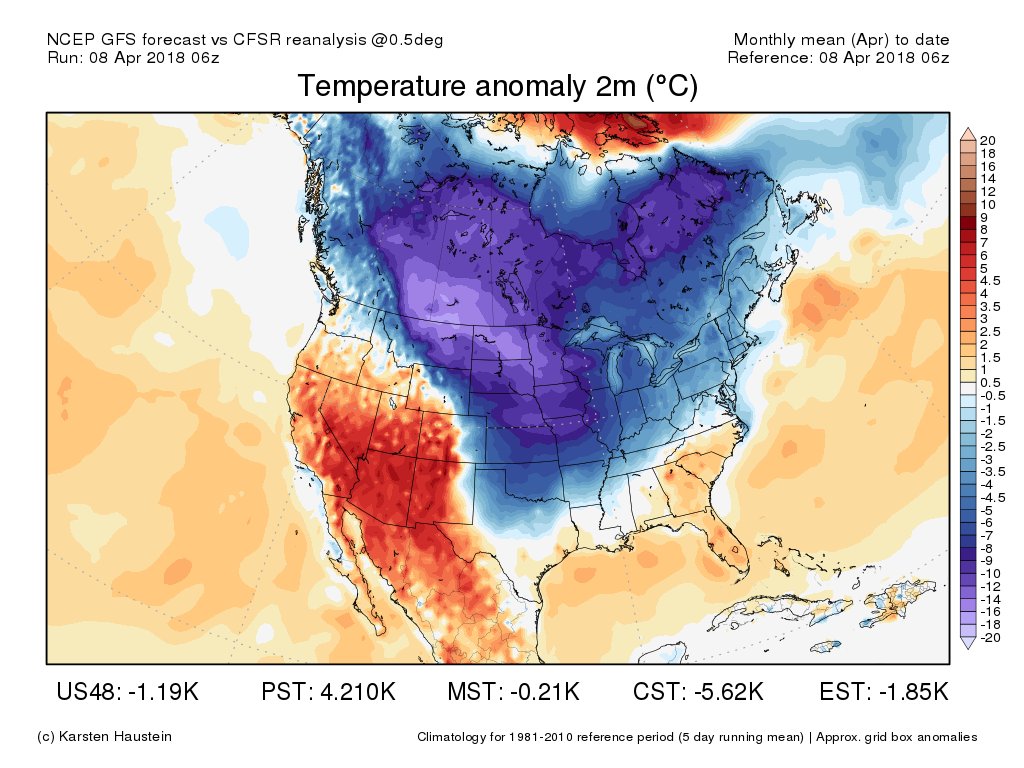 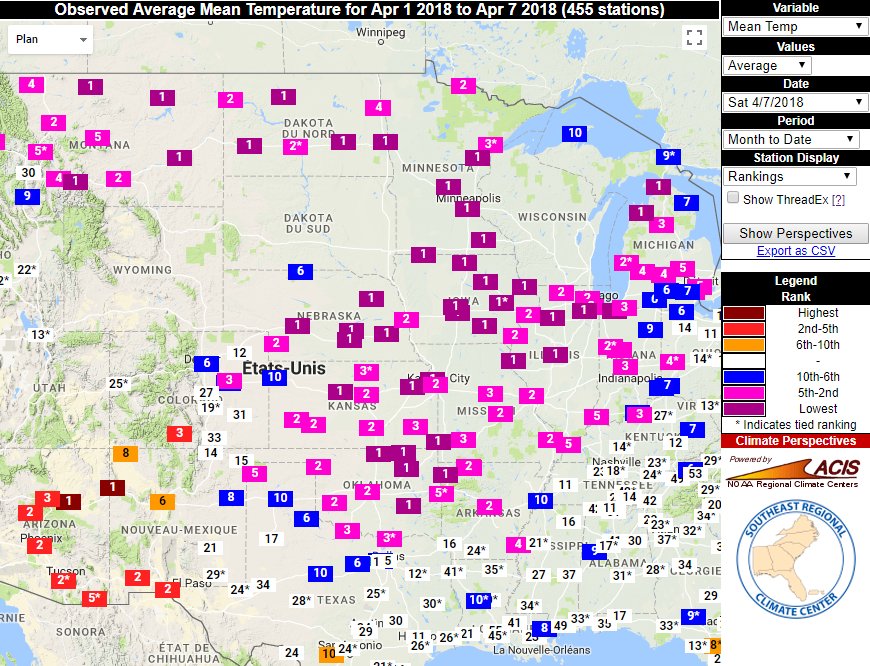