Monday April 9th… Dear Diary. The main purpose of this ongoing post will be to track United States extreme or record temperatures related to climate change. Any reports I see of ETs will be listed below the main topic of the day. I’ll refer to extreme or record temperatures as ETs (not extraterrestrials)😊. Here is today’s main climate change related topic:

Hydrogen as a Fuel?

The article that I’ve referred to doesn’t mention climate change, just the fact that fossil fuels are a finite source of energy. They do bring up a good point which I will quote: If you eliminate infrastructure issues from consideration for a moment, utilizing the most abundant element in the universe, hydrogen, as an energy source makes a lot of sense. Hydrogen as a vehicular fuel, according to Hyundai, is also a question of when. Unlike energy-storage devices such as batteries or capacitors, once H2 is captured and pressurized, the losses are minimal. Storing 100 kilowatt-hours in a battery for a year is impossible because the state of charge drops over time. Fuel cells do lose some efficiency in cold climates, but not nearly as dramatically as one will encounter with batteries. Yes, pressurized hydrogen can be dangerous. However, there are other ways to store hydrogen for long durations—in ammonia, for example—that involve less risk.

Hydrogen might also be an alternative to generate power plant electricity:

The above linked U-Tube video shows the largest hydrogen electric generating plant in the world in South Korea. I would invite all to look at other videos from the same link to see the pros and cons of hydrogen. My biggest problem with hydrogen is its volatility. Remember the Hindenburg from 1937? Well, you get the picture. Others see economic problems for hydrogen:

Due to higher costs and lack of available infrastructure (the U.S. has just 700 miles of pipes rated for hydrogen), the hydrogen economy continues to see delays. Meanwhile, wind, solar and EVs are surging due to increasingly superior economics.
2:06 PM – 9 Apr 2018

As an example in the broader discussion, consider Nikola which has been trying to produce a hydrogen electric hybrid long haul truck for years to no avail and Tesla whose electric long haul truck is in alpha testing and will hit roads in 2019.
4:34 PM – 9 Apr 2018
After today’s research, I see hydrogen, like nuclear as a peripheral option…something that can help the climate issue, but probably won’t be in wide use going through the 21st century.

The more I look at the current cold wave hitting much of the U.S. the more I am impressed. This cold is going to put a real dent in those warm record stats not ending anytime soon: 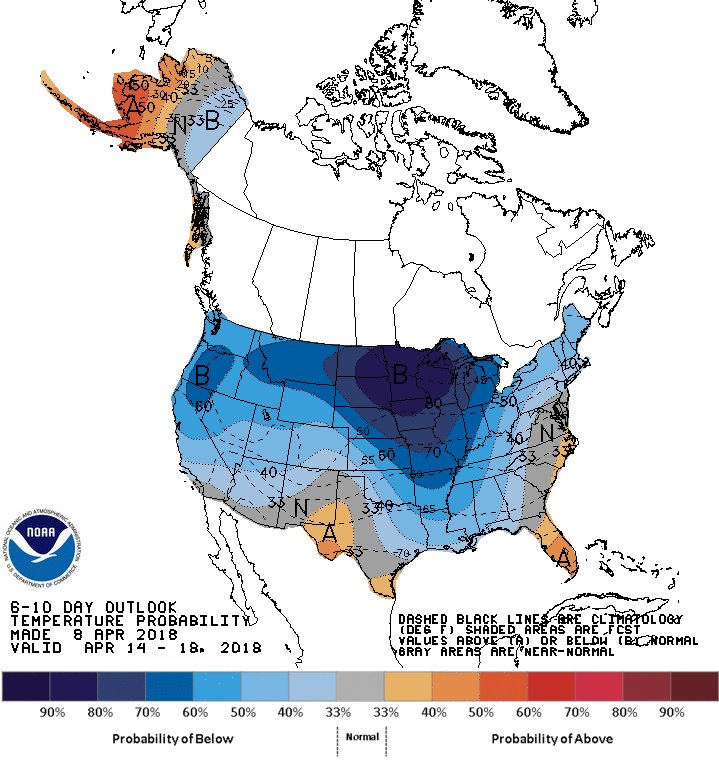 This is still in track. It’s extremely hard to link a blizzard to global warming, but as noted a few days ago Arctic warmth and the breakdown of the polar vortex are interacting with storm systems: