Friday April 13th… Dear Diary. The main purpose of this ongoing post will be to track United States extreme or record temperatures related to climate change. Any reports I see of ETs will be listed below the main topic of the day. I’ll refer to extreme or record temperatures as ETs (not extraterrestrials)😊. Here is today’s main climate change related topic:

Happy Friday the 13th everyone. I hope all are avoiding bad luck today. Speaking of one area that has had bad luck weather-wise this year, the western High Plains into the Desert Southwest has been atypically hot and dry. This area is warm and arid anyway, so what is the big deal? With climate change arid areas like western Plains grasslands are susceptible to slipping into a desert climate. In a hotter world deserts expand so what could be happening now from the Texas Panhandle northward into western Kansas is a sign of the Desert Southwest expanding…another canary dying in the coal mine signifying change. A recent Yale publication posited that a huge, climatologically dry area is encroaching upon U.S. farmland:

In the late 1800s, geologist and explorer John Wesley Powell first described a clear boundary running longitudinally through North America along the 100th meridian west that visibly separated the humid eastern part of the continent from the more arid western plains. Now, 140 years later, scientists have confirmed that such a sharp climatic boundary exists and that it is slowly shifting east due to climate change — a change that scientists say could have significant implications on farming in the region.

The new research, published in a pair of studies in the journal Earth Interactions late last month, found the divide is created by three factors: the Rocky Mountains stopping moisture from the Pacific Ocean reaching farther inland, Atlantic winter storms bringing moisture to the eastern half of the U.S., and moisture from the Gulf of Mexico moving north and curving eastward during the summer months. The only other clear, straight divide between humid and arid areas on the globe is the one separating the Sahara Desert from the rest of Africa, climate scientist Richard Seager of Columbia University, lead author of the new papers, said in a statement. 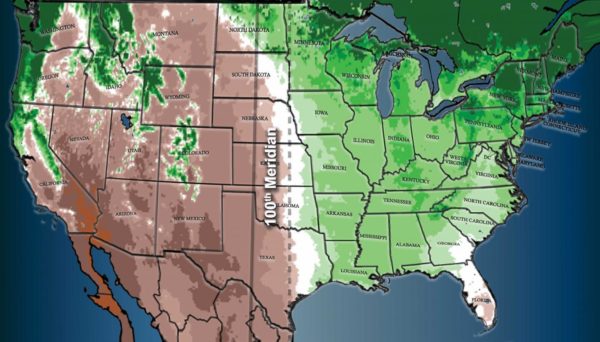 The last 24-48 hours have truly been hellish in the western High Plains where the combination of near record high temperatures approaching 100F, drought, and high winds have set of several large fires:

Latest drought monitor from @DroughtCenter has expansive Extreme/Exceptional drought across Four Corners and southern Plains; no coincidence that these places are dealing with extreme fire danger today and tomorrow 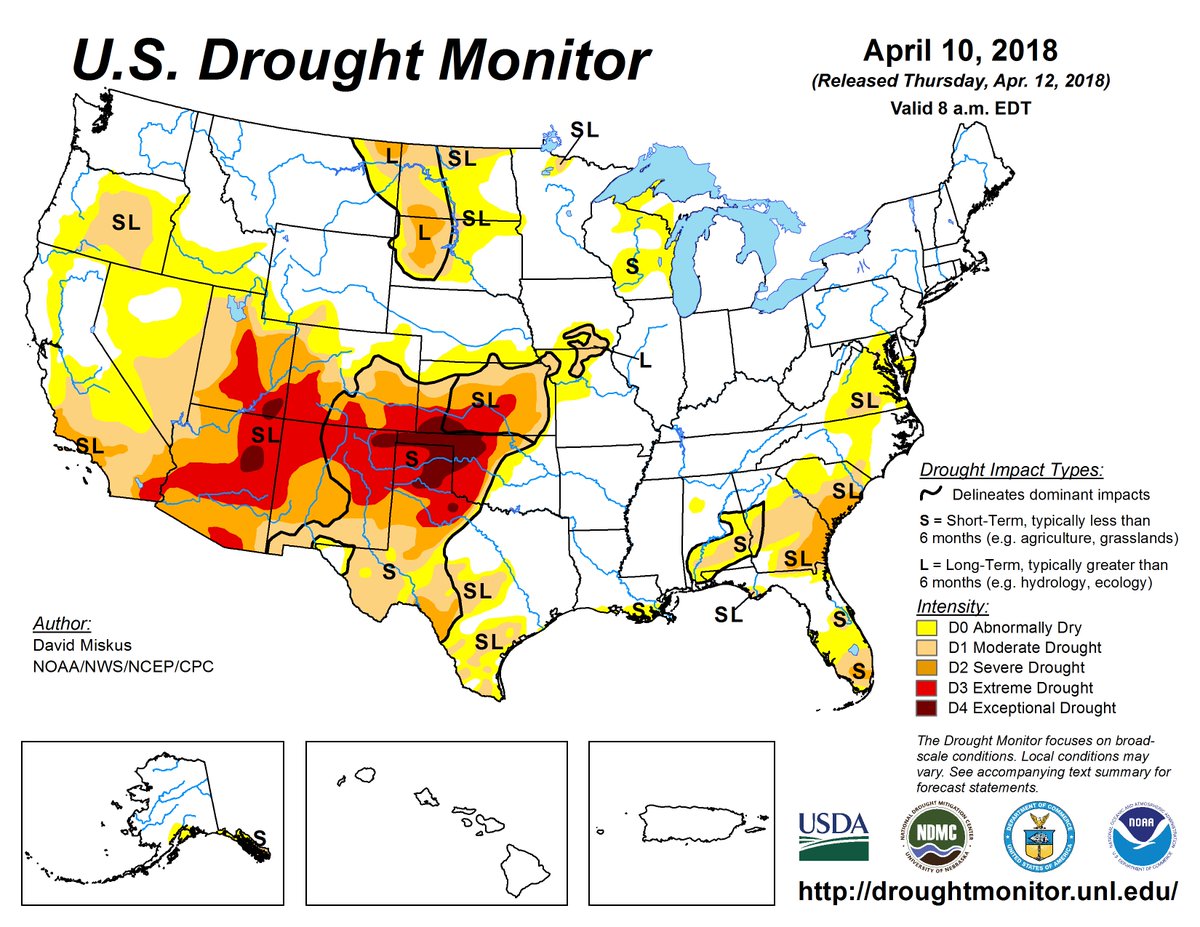 First 100s of the year in Oklahoma this afternoon. (With dew points in the teens) #okwx 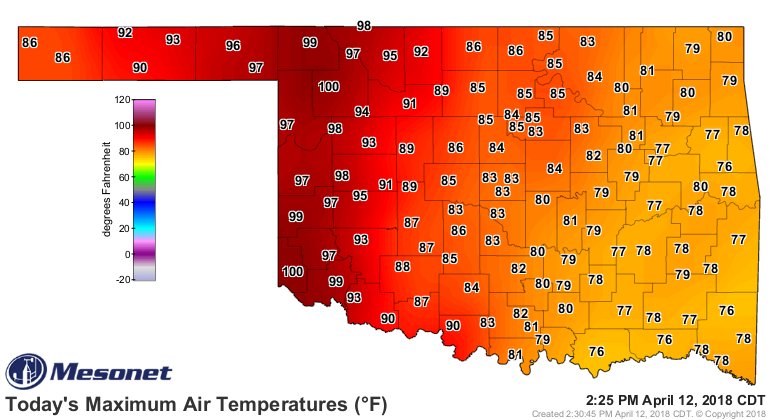 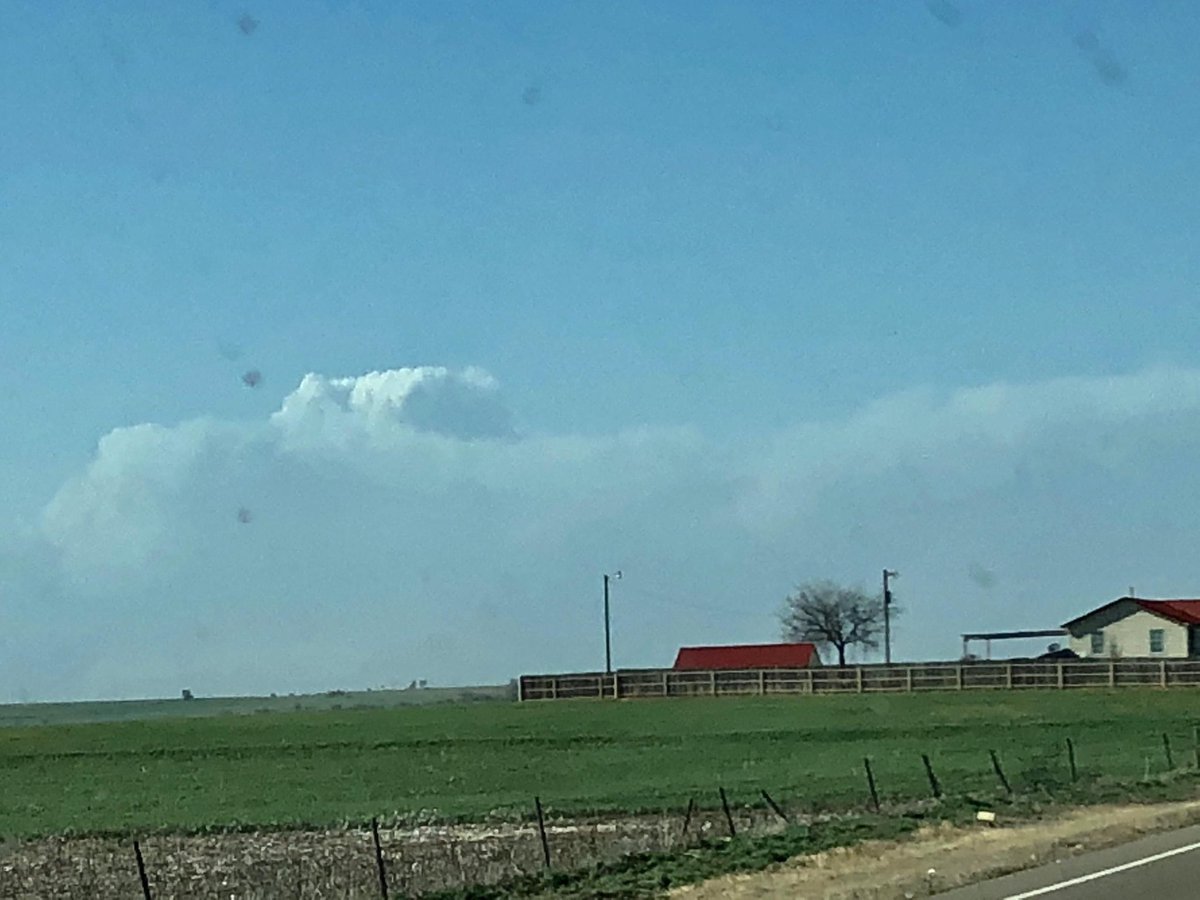 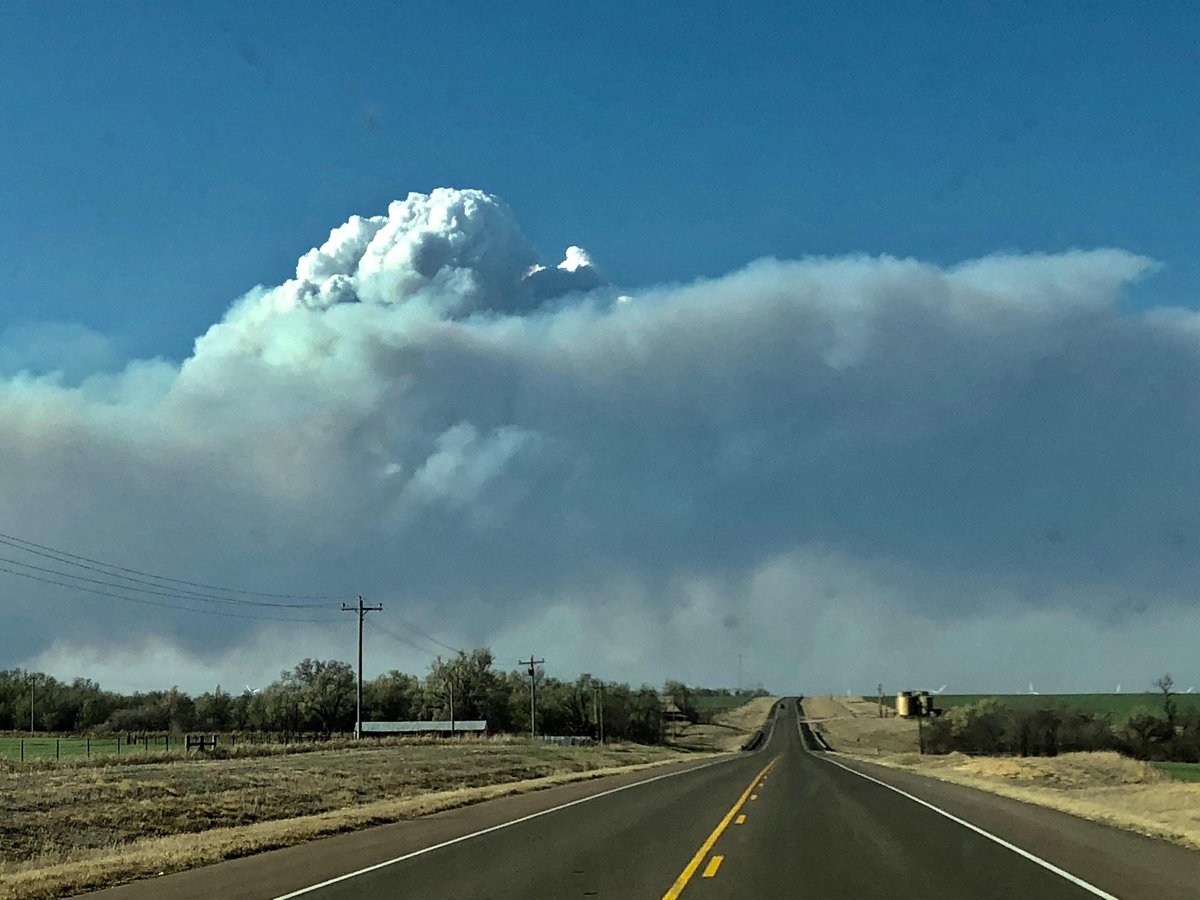 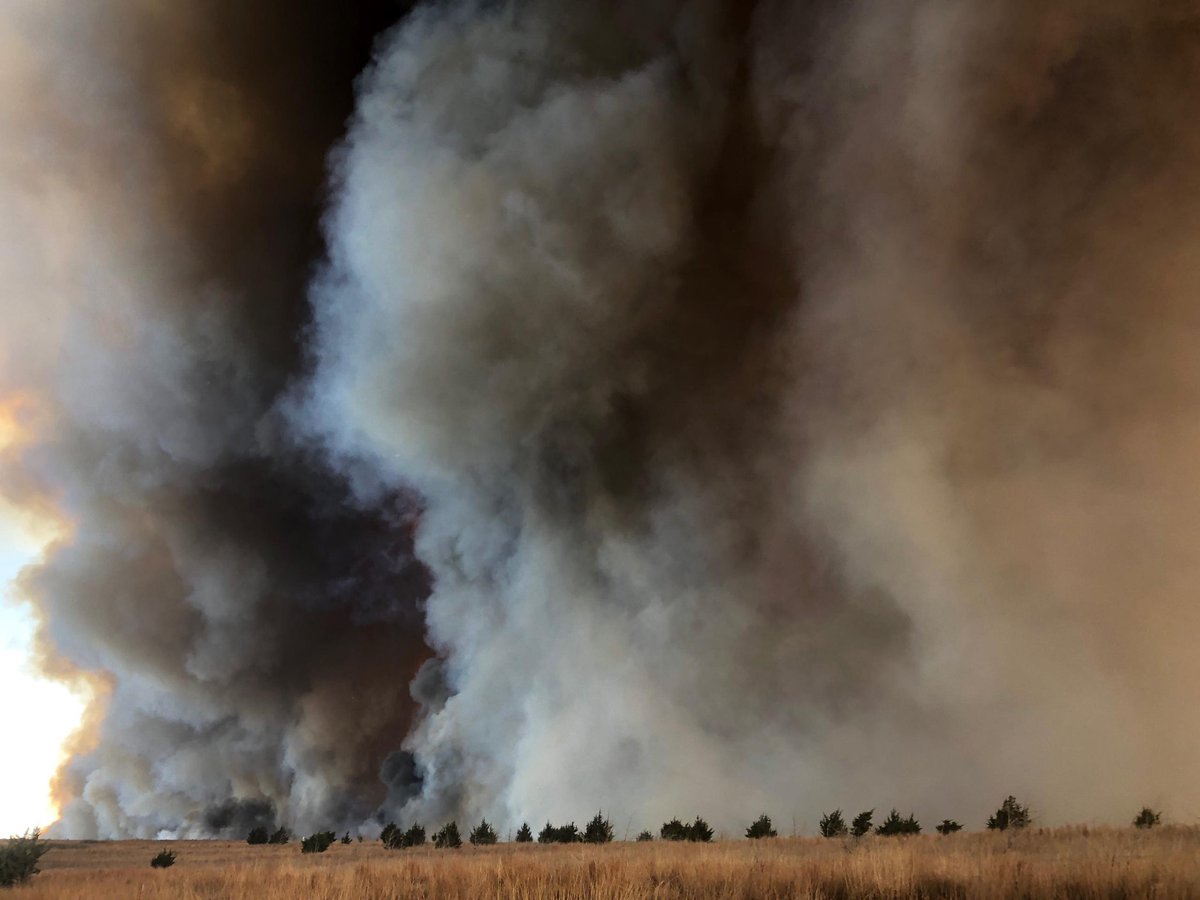 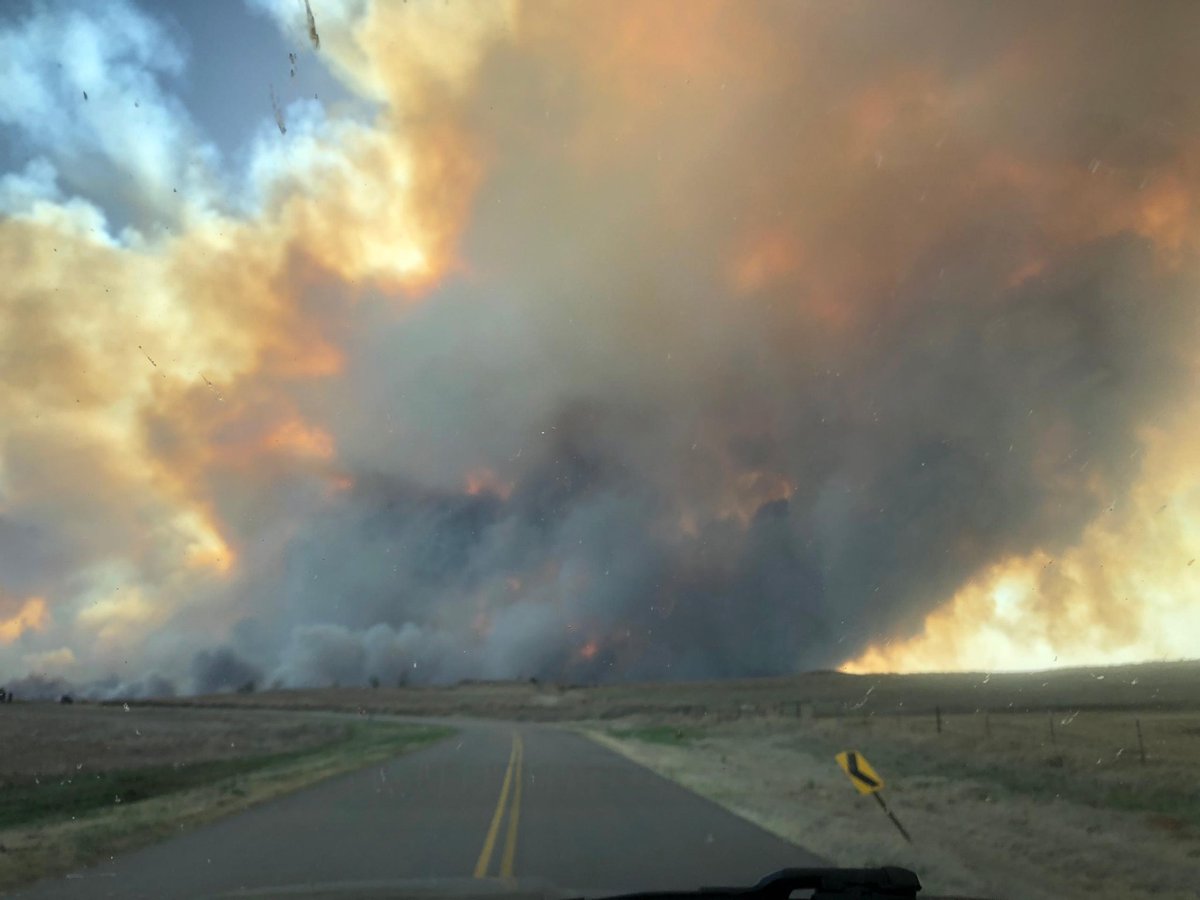 Chance Coldiron @ChanceTColdiron
Leedy, OK fire from @JeffStormjockey ! Fire is huge and out of control! @ReedTimmerAccu @JEROMYCARTER1 @JC_TwistingFury @Stormwatcher771
6:07 PM – 12 Apr 2018
So, what weather-wise do we need to prevent in the long run the western High Plains from becoming just an extension of the Southwest Desert? The short four letter answer is  abundant rain, of course, produced by systems either moving from California through the Southwest or forming closed lows near the Four Corners states area turning on easterly upslope flow spigots east of the southern Rockies. The drought in Southern California is linked to the drought from the Southwest to the western Plains since most systems have not been strong and cold enough to dig as far south as Southern California this winter and spring.
This being written desertification has been a fairly slow process in the West the last few decades, or over one lifetime. ENSO can on occasion stack up to produce breaks in droughts, such as what happened across California in 2017, curtailing desert encroachment or true climate change. I fear though, that as the planet heats up going into the 2020s a new Dust Bowl will develop in the western Plains. Time will tell.
…………………………………………………………………………………………………………………………………….
In the space below I will add any reports of ETs and associated reports.
One point, the cold pocket over North America in April has been remarkable but isolated: 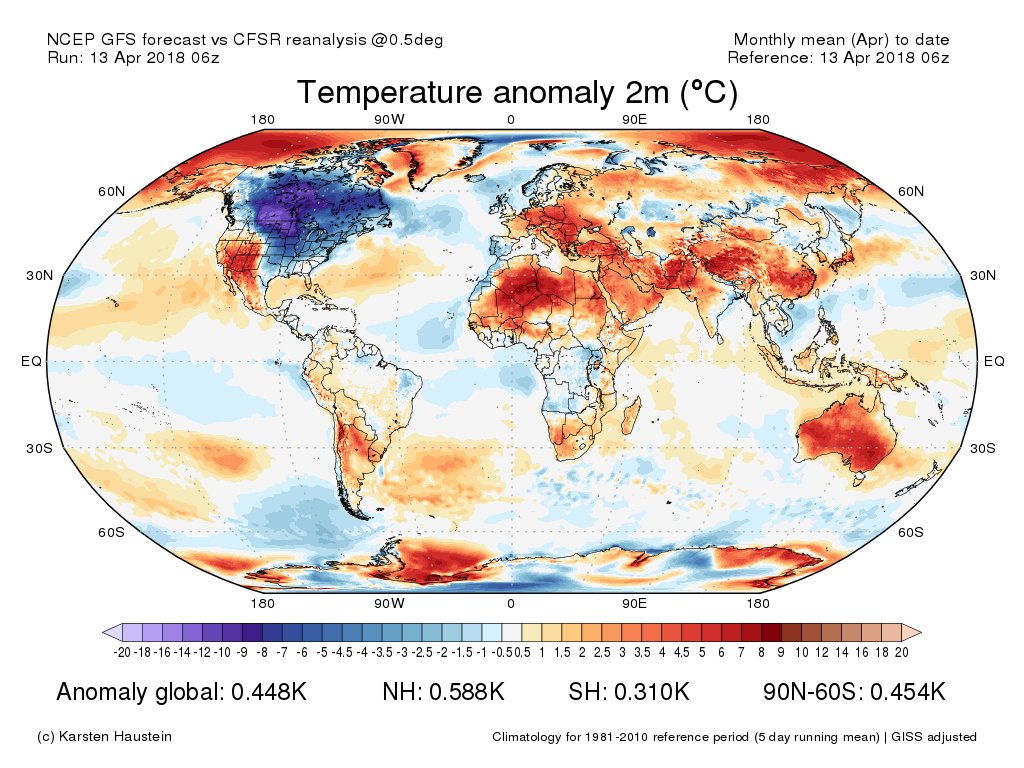