Saturday April 21st… Dear Diary. The main purpose of this ongoing post will be to track United States extreme or record temperatures related to climate change. Any reports I see of ETs will be listed below the main topic of the day. I’ll refer to extreme or record temperatures as ETs (not extraterrestrials)😊. Here is today’s main climate change related topic:

This weekend we celebrate Earth Day working for, writing about, and longing for a better sustained environment for future generations to enjoy. On this Earth Day we can take heart in the fact that green energy is getting cheaper and that fossil fuels appear to most of the world as part of the past rather than the future. I can think of no other horrific symbol for past, dangerous methods to extract energy than the exploding Deepwater Horizon Gulf oil platform:

It’s been 8 years since the #DeepwaterHorizon exploded, killing 11 and spilling nearly 5 million barrels of oil into the Gulf of Mexico. Trump wants to gut legislation and make it easier for disaster to strike again:  https://buff.ly/2HOnbIZ 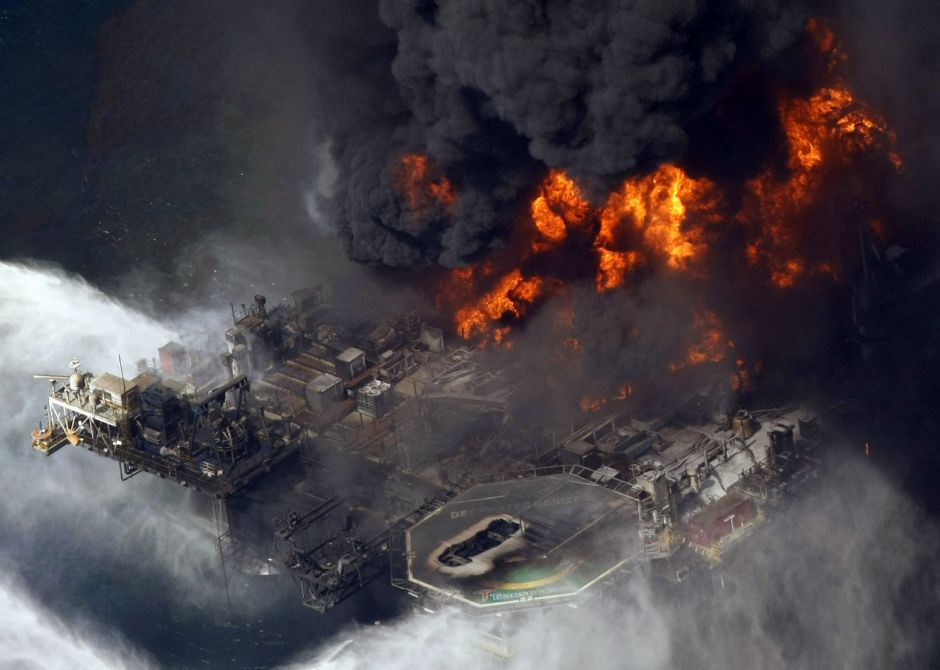 12:44 PM – 20 Apr 2018
Back in 2010 while I was forecasting at The Weather Channel the spring that Deepwater Horizon blew I can remember the groans from my group because we had to do extra work to peg both wind speeds and wave heights for weeks after the initial explosion. We did the extra forecasts to aid crews trying to clean up the giant oil spill. I thought to myself surely this is it, the incident that spurs the United States away from offshore drilling towards electric cars powered by green energy. Uh, Climate Guy…not yet, not even much of a glimmer of light at the end of a very long tunnel. We seem to be no closer to my thoughts and goals in 2018 than in 2010, although technology has improved.
As a reminder, can anyone reading this post point to solar or wind farms in which workers have been killed or severely injured? What about wildlife getting killed as a result of chemicals being spilled? What about the drop in tourism because of brown, slimy beaches? What about cancer, asthma and other health issues due to widespread spilt petroleum? Can an oil rig, even a supposed safe system, compare with solar and wind farms as far as being dangerous to life and limb? For that matter, I’ve never even read about a major catastrophic incident harnessing green energy, but since Deepwater Horizon many explosive issues remain in association with refineries, pipelines and oil transport.
Rigs like Deepwater Horizon are operating to this day because of economic reasons. The demand for petroleum has never been stronger going into this summer as gas prices spike back towards $4 a gallon. Gasoline powered vehicles made by such companies as Tesla remain too expensive for most consumers. The Tesla Model 3 is priced at around $35,000 about $10,000 more expensive than a typical gasoline powered sedan. Moreover, the infrastructure to refuel electrics beyond plugging them in at home just isn’t here as of 2018. I contend that there needs to be a higher power besides free market capitalism that needs to change the dynamics of our energy system.
Now Trump, Scott Pruitt, and others want to make it easier for companies to drill offshore, doubling down on brown energy. This nation does need environmental rules and regulations even though most people hate red tape. Let the image of Deepwater Horizon burn in your memory as you go to the voting booth this fall in honor of fallen heroes and countless people trying to shape a better world.
…………………………………………………………………………………..
I may add ET reports should they cross my radar later today.
(If you like these posts and my work please contribute via the PayPal widget, which has recently been added to this site. Thanks in advance for any support.)