Tuesday May 15th… Dear Diary. The main purpose of this ongoing post will be to track United States extreme or record temperatures related to climate change. Any reports I see of ETs will be listed below the main topic of the day. I’ll refer to extreme or record temperatures as ETs (not extraterrestrials)😊. Here is today’s main climate change related topic:

In the universe as far as anyone can detect every consequence of an action is the result of cause and effect. If I drive on the wrong side of the road I am likely to have an accident that could harm others. If I don’t pay my taxes I’m going to be charged with a big fine, get jail time, or both. There is the scientific principle that for every action there is an equal and opposite reaction until equilibrium is established. What mankind has set in motion by increasing carbon in the atmosphere from 280 parts per million in the 19th century to 410  parts per million this year will produce far worse effects in the future than what we have witnessed so far even if pollution were to instantly stop world wide today. The very fact that climate wheels are set in motion towards more warmth will produce even more warmth via an increasing number of feedback loops. Today I will touch on some of these. If you, the reader, think of more drop me a note and I’ll add items to this post.

First, due to increasing heat the planet’s population will want to seek comfort through more air conditioning. Cooling a building takes energy, so more carbon will be put in the air producing that energy unless the edifice utilizes green power. That’s not likely as of 2018. What we see here is a feedback loop of heat leading to more AC leading to more heat. The New York Times had an article on air conditioning today: https://www.nytimes.com/2018/05/15/climate/air-conditioning.html

Because air-conditioners work in part by venting hot air outside, they also make the surrounding neighborhood warmer. By some estimates air-conditioning can raise overnight temperatures by about two degrees Fahrenheit (one degree Celsius) in some cities, the report said. Practically speaking, if enough of your neighbors buy an air-conditioner it may increase the temperature in your home enough to drive you to do the same.

And then, of course, there’s climate change. India is already one degree Fahrenheit warmer on average than it was a century ago. This has led to more “cooling degree days,” or days when average temperatures are warm enough to necessitate air-conditioning.

“If you look at cooling degree days for Chennai or Mumbai, these are places that have twice as many cooling degree days as the hottest city in the U.S., Miami,” said Lucas Davis, director of the Energy Institute at the Haas School of Business of the University of California, Berkeley. “It’s unbelievably hot — there’s nothing in the U.S. that compares in terms of heat to these cities in India.”

Second, researches have noticed that with increased heat in inland bodies of water comes an increase in algae, which emits carbon and methane, thereby increasing in a relatively small way atmospheric global warming. This feedback loop was touched on by Inside Climate News today: https://insideclimatenews.org/news/15052018/algae-blooms-climate-change-methane-emissions-data-agriculture-nutrient-runoff-fertilizer-sewage-pollution-lake-erie

Blooms of harmful algae in the nation’s waters appear to be occurring much more frequently than in the past, increasing suspicions that the warming climate may be exacerbating the problem.

The study comes as scientists have predicted proliferation of these blooms as the climate changes, and amid increasing attention by the news media and local politicians to the worst cases.

In a study released in March, researchers affiliated with the University of Minnesota, Minnesota Sea Grant and the U.S. Environmental Protection Agency found that, globally, lakes and manmade “impoundments” like reservoirs emit about one-fifth the amount of greenhouse gases emitted by the burning of fossil fuels. The majority of that atmospheric effect comes from methane, an especially potent short-lived climate pollutant.

I’ve already posted numerous articles about a third and most important item, the release of methane hydrates from the thawing Arctic tundra. As the planet warms more methane will get in the atmosphere from the Arctic region thereby increasing  heat in a vicious circle until and somehow the cycle stops. This will happen when there is no more methane that can readily be released due to added heat. It might stop if planetary temperatures stabilized at the current level, but we all know that’s not going to happen. I have yet to come across an article stating an estimated potential amount of methane that is trapped beneath the Arctic, so I and other climatologists just don’t know how bad this feedback loop will get. One clue, however, is that we see in the planet’s past sharp spikes in temperature due to suspected release of large quantities of CH4. Thankfully in this universe methane, though a much more powerful greenhouse gas than CO2, is relatively short lived in the air.

“The greenhouse gas, methane, is produced by both natural processes and human activities. While there has been much attention paid to curbing anthropogenic emissions, a changing climate will likely increase the production of natural methane.”

A fourth ironic feedback loop might be in the future substantial drilling for oil in the Arctic due to easier access since the polar ice sheet is decreasing due to global warming. Greenpeace and other organizations are fighting hard to keep Arctic oil in the ground or below the sea. Perhaps the global warming issue in the not so distant future will be looked on as such a bad problem that most discovered oil will be left in the ground in the Arctic region. Certainly more easily accessed oil will lead to the delay of “peak oil” when due to shortages the planet will be forced to use other more green fuels.

Oh, and let’s bring up a fifth. Less sea ice produces a higher albedo over the polar regions, as we know, leading to warmer temps, less ice, then more global warming.

What will happen when the sum all of these positive feedback loops affect the climate? I shudder to think. We will see as the “how soon and how bad” debated continues.

Here is another startling list of “ET’s” for mid May:

Impressive coverage of heat yesterday from the South to parts of the Midwest. Here’s a sampling of some of the record highs set yesterday, including New Orleans which tied an all-time May record at 96°! 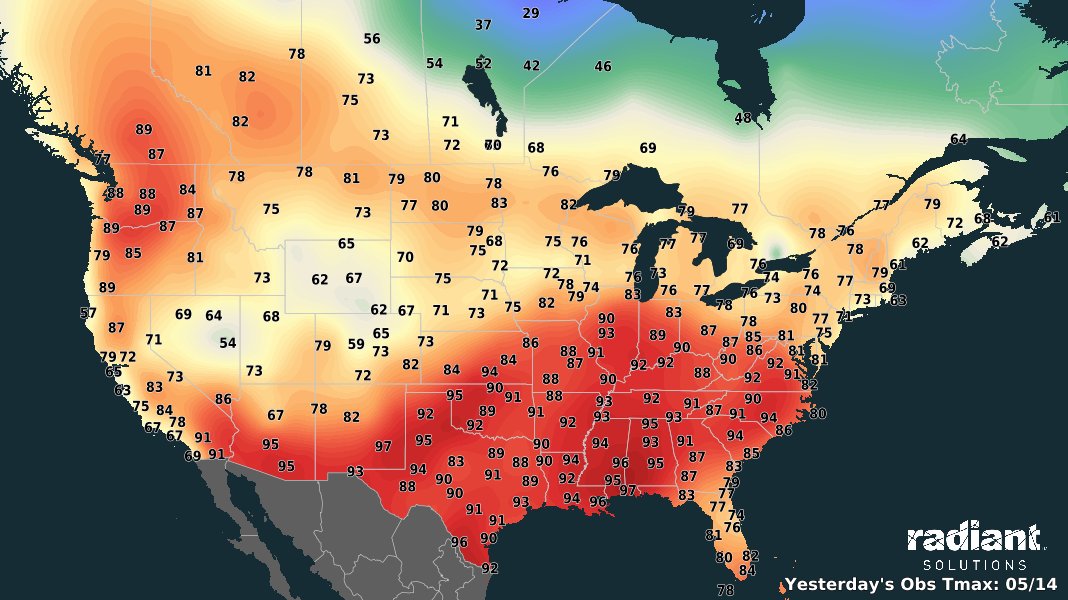 A preliminary high temperature record of 94 degrees has been set at Houston Intercontinental Airport this afternoon. The old record was 92 degrees set in 2003. #txwx #houwx #bcswx #glswx