Thursday May 17th… Dear Diary. The main purpose of this ongoing post will be to track United States extreme or record temperatures related to climate change. Any reports I see of ETs will be listed below the main topic of the day. I’ll refer to extreme or record temperatures as ETs (not extraterrestrials)😊. Here is today’s main climate change related topic:

Taking a Stand on Cryptocurrency:

Back in February I first became aware of high energy use in association with trading cryptocurrency, a relatively new capitalistic phenomena literally coming on line in the last decade. I was a bit uncertain as to how environmentally unfriendly the process of trading currency like Bitcoin is, but I have no doubt now. Cryptocurrency transactions, despite computer improvements, soak up too much energy. Please avoid their usage. I saw a note from Eric Holthaus today indicating  such:

Bitcoin’s energy consumption is growing at 20% *per month* and is effectively erasing decades of progress on renewable energy.

By late next year, bitcoin could be consuming more electricity than all the world’s solar panels currently produce — about 1.8 percent of global electricity, according to a simple extrapolation of the study’s predictions. That would effectively erase decades of progress on renewable energy.

Although the author of the study, Alex de Vries, an economist and data consultant based in the Netherlands, has shared these calculations publicly before, this is the first time that an analysis of bitcoin’s energy appetite has appeared in a peer-reviewed journal.

You can take a peak at what I wrote in “my diary” concerning Bitcoin here: https://guyonclimate.com/2018/02/19/extreme-temperature-diary-february-19-2018-bitcoin-trouble/

Here is a fitting excerpt:

After doing some reading it appears that many people profited greatly when Bitcoin was introduced from 2008 until now. The thing may have peaked as described  in the article, so there could be a “Bitcoin bust” occurring now or in the near future, dashing  people’s hopes and dreams much like the stock bust of the 1920s, the dotcom bust of the 1990s, and the housing bust of the 2000s,  I digress. Greed is partly responsible for keeping the carbon pollution industry going, and greed will keep the high energy using cryptocurrencies in circulation. In the long run there probably will be more losers than winners with crypto Ponzi schemes, but the biggest loser could be the environment. What’s scary to me is that the cryptocurrency revolution may be in its infancy now much like Facebook was only a decade ago. Greed may help doom civilization in yet another way unheard of before the turn of this century.

As Eric describes in his article it is a shame that so much electricity is  going towards trading of cryptocurrency using high powered computers. Even if trading was “green” with computers being run off solar power, that  energy could be used for homes and other businesses. Very soon, and to libertarians chagrin, the usage of energy may have to be regulated, especially as worse ramifications due to climate change raise more eyebrows, forcing policy makers to take stands.

This is one of the first topics I have revisited on my diary. As promised, as more information comes to light, I’ll revisit more.

In other news NCEI has assessed that Earth had its 3rd warmest April since records have been kept in 1880:

With April in the books, it’s now officially been 400 months in a row of global temperatures above the 20th century norm according to @NOAANCEIclimate 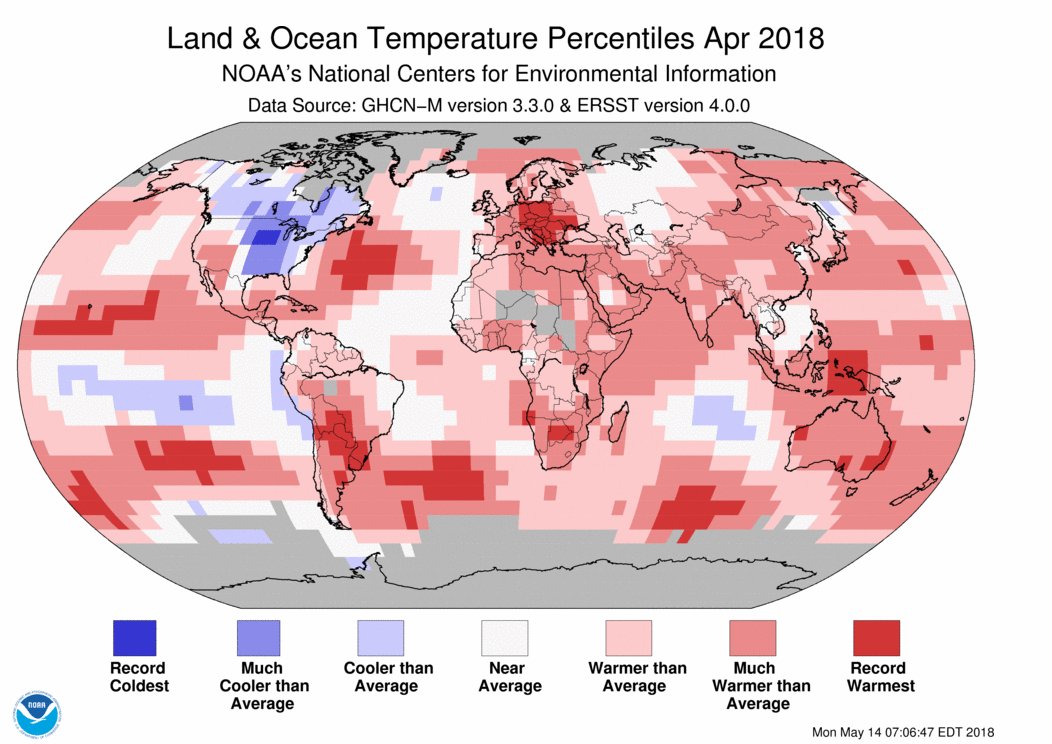