Thursday May 31st… Dear Diary. The main purpose of this ongoing post will be to track United States extreme or record temperatures related to climate change. Any reports I see of ETs will be listed below the main topic of the day. I’ll refer to extreme or record temperatures as ETs (not extraterrestrials)😊. Here is today’s main climate change related topic:

The title for today’s post is scientifically quite obvious. Even without carbon pollution some station (or stations) will set record temperatures in June due to the nature of weather pattern variations. No month, no matter how cold, has not seen at least a few daily record high maximums somewhere in the U.S. in the National Center for Environmental Information’s data base since counts began to get viable in 1920. Lately though, record warm to hot reports have far exceeded the number of cold records indicating a climatological imbalance. One big marker for climate change that should wake people up to action is record heat moving forward through the 21st century. As record heat outpaces cold weather any contrarian arguments will fall out of favor with the public the next few years. It looks like we will see plenty more points for that “warm team,” unfortunately across the U.S. in the coming month.

Certainly the National Weather Service thinks that June will see above average temperatures:

Well…..looks likely we’ll see a scorcher of a June ahead. 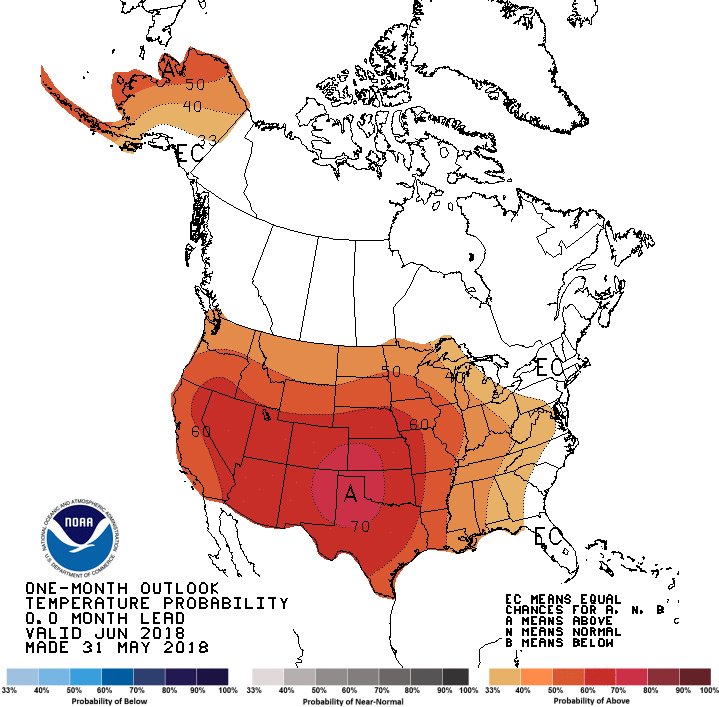 Oklahoma Mesonet @okmesonet
WHO’S READY FOR WINTER? The 70% odds of above normal temperatures for  June are some of the highest we’ve ever seen on the CPC Monthly Outlooks  for Oklahoma. And this is right off the heels of the warmest Oklahoma May on record, dating back to…
4:08 PM – 31 May 2018
Note that the western High Plains has the greatest chance for above average temps, and thus any record heat with good reason. The heart of the heat dome, or upper ridge, began to establish itself in May over that area. Medium range models and ensembles forecast the ridge to wax and wane, but essentially building in about the same geographical area as occurred in May going into the second week of June. Case in point when the thing builds to a zenith next Friday according to the European model with the heart of the ridge setting up again in west Texas and New Mexico:

500 Millibar heights of the magnitude depicted on the chart would be impressive on summer’s hottest day, so you know records will be set into mid June across a wide swath of the country except for perhaps the Southeast, New England, and  California. As an aside, speaking of California:

While just about everyone else in the US roasts, May is set to end a very impressive 54-month streak of warmer than normal months in San Diego

NWS San DiegoVerified account @NWSSanDiego
Looks like #SanDiego will see the first cooler than average month since October 2013. With 1 day to go, the mean temperature for May  is 63.5, half a degree cooler than the average for May (64.0). #cawx #SoCal
7:41 AM – 31 May 2018
Let’s look at some ensembles to see if extremely high 500 millibar heights on that one European Model look plausible:

Indeed, the ridge is setting up where we have already seen records as high as 106F at Lubbock, Texas already.
Let’s take a peak at model two meter temperatures for next Friday:

After some experience with this product last year you can add a few degrees onto these figures for maxes. We may see widespread high temperatures from 100-110F anywhere from Kansas southward through western and central Texas, and in the desert Southwest if the models verify. The heat will be waxing and waning  as fronts scoot through the central Plains.
What about tomorrow? Ahead of a front some below record level heat, but hot weather in the low 90s will occur across the Southeast. Watch for a few records to fall in parched west Texas and western Oklahoma:

Heat advisories have been posted in west Texas. Unfortunately people will need to be aware of conditions that can easily lead to wildfires throughout the southern Rockies:

The Climate Guy a