Two Big Hottest Areas On Record For May

Today I am getting indications that not one but two major areas on the planet will see their hottest Mays in recorded history. Those would be both the United States and now northern Europe (or perhaps all of Europe). Before writing any further let me state that we won’t know that these areas definitively had their hottest Mays until climatology gurus have completed their calculations later this month. For the United States this will be by Friday or next Monday. The National Center for Environmental Information will have completed it’s global assessment, including  that for Europe, by 6/15 or shortly thereafter. I think that once anticipated May 2018 climatology gets compiled we will see these items make news more so than usual because of reported record warmth, which will put more nails in the coffins of climate change skeptic’s arguments. Again, we will just have to wait and see what any ranking figures look like.

Here is my prior post in which I wrote that I strongly suspected that the U.S. had its warmest May on record:

Incidentally, not included on that post, the U.S. did see it’s highest ratio of daily high max to dairy low min records for the Month of May 2018 since January 1920 when counts began to get viable in the NCEI database, about 26 to 1.

Here is the piece of information I saw today leading me to believe that most of Europe also was just as toasty as the U.S.:

Warmest May on record in Europe, 2.5°C above 1981-2010 May average! Largest increase in #temperature in NEurope; global temp 0.4°C above average; only few regions inc Greenland & NCanada experienced much below avg temp. Read more from #Copernicus #C3S

Quoting from their linked piece:

May 2018 was warmer than the 1981-2010 average over most of Europe. It was particularly warm in the north of the continent, especially in Norway and Sweden. The 16.1 °C monthly average of temperatures measured in Oslo was the highest ever recorded for a Norwegian weather station in May, and 5.3°C higher than the 1961-1990 average for the station. The maximum temperature of 31.1°C recorded in Gothenburg on 30 May is the highest May value in the station record, which dates back to 1859. It is also the warmest May temperature recorded in Sweden in more than 100 years. Neighbouring countries also experienced record warm temperatures. Only the Iberian Peninsula (with Corsica and Sardinia) and eastern European Russia had temperatures around or below normal.

As a meteorologist I have noted over decades that usually when the U.S. is hot Europe is cold, and vice a versa, due to what are termed typical teleconnection long wave patterns in association with the jet stream. At this juncture in history forecasters, it appears, can’t rely on prior climatological upper air patterns to assess monthly or seasonal temperature patterns for large areas of the planet.

Globally Copernicus ranks May 2013 as third warmest in their database:

The warmest and second-warmest instances of each month of the year occur between October 2015 and December 2017.

The largest anomalies in European-average temperatures occur in wintertime, when values can vary substantially from month to month. Following below-average European temperatures in February and March, April 2018 became by a clear margin the warmest April on record. May 2018 has likewise become by far the warmest May on record. The European-average anomaly is 2.5°C for May 2018; this compares with 1.6°C for May 2003, the second warmest May on record.

Twelve month averages for the globe are also running at third warmest:

Running twelve-month averages of global-mean and European-mean surface air temperature anomalies relative to 1981-2010, based on monthly values from January 1979 to May 2018. The darker coloured bars are the averages for each of the calendar years from 1979 to 2017. Source: ERA-Interim. (Credit: ECMWF, Copernicus Climate Change Service)

All climatologists will be waiting with baited breath to see U.S. assessments.

In other news it appears that the southern Plains and Texas will begin to see dangerous heat starting tomorrow, so I’ll arbitrarily state that heat episode #3 will be underway for the U.S. starting Wednesday. Granted though, this area if the U.S. along with the desert Southwest is most accustomed to excessive heat:

At this point it doesn’t appear that this new heat wave will be expanding much out of the central and southern Plains, but some guidance leaves me very uncertain. I’ll have more on this heat wave tomorrow.

Speaking of warmth this month:

Michael Ventrice‏Verified account @MJVentrice
Latest June forecast from ECMWF-S5 blow torching the Plains.  June 2018 looking like another hot month much across the lower 48… similar to May 2018, though west shifted with the extreme heat compared to May. 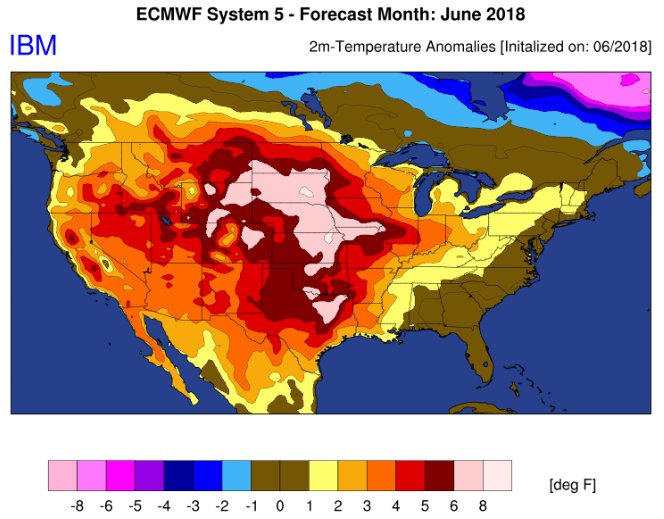 8:36 AM – 5 Jun 2018
Well today across the U.S. no weather news is good news. It’s not often that the NWS advisory graphic shows nearly a clean slate.☺ 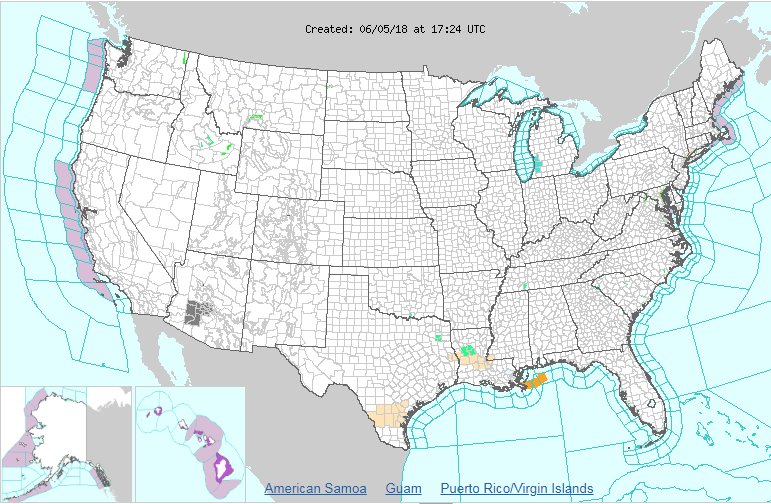