The National Center for Environmental Information has crunched necessary numbers and completed their assessment for spring 2018. As expected May 2018 was the warmest May on record for the contiguous U.S. since rankings started in 1895 indeed breaking a log standing record set in 1934. As we have seen for most of the last two decades due to carbon pollution almost all seasonal averages end up above long term averages. Spring 2018 was yet another such occurrence despite a relatively chilly April. What raised my eyebrows was the astounding warm turnaround from April going into May, a signal that we have entered a new climate regime since the last strong El Nino in 2015 such that any synoptically produced cold patterns will rapidly be replaced by warmth in the future unless their is a big uptick in planetary volcanic activity, the only natural factor remaining that can temporarily cool Earth. For today’s post I will refer to this excellent NCEI article published this morning: 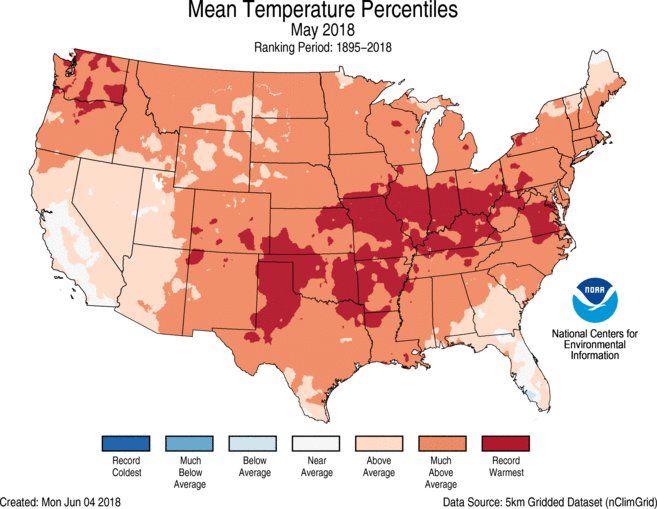 8:04 AM – 6 Jun 2018
As many of you are aware starting in 2010 I began a contest called the Climate Lottery to demonstrate that more often than not on a seasonal basis warmth was outpacing cold and also to entice any players to look at NOAA products to make forecast picks. Since climate change denialist arguments have become moot the only reason to continue the contest is for people to keep tabs on how fast and how soon temperatures are rising. To find out how to play please read this link:
https://guyonclimate.com/the-climate-lottery/
I’ll post the same rules for a summer 2018 contest along with state ranking charts for each spring month tonight. The Climate Lottery #s for spring 2018 were: 77 (March) 16 (April) 124 (May) and 103 the Power Ball # for spring.
May saw the highest possible ranking as of 2018 at 124. It would appear that NCEI has revamped their national temperature rankings site where you can get quick access to these numbers here: https://www.ncdc.noaa.gov/cag/national/rankings/110/tavg/201805
For this post let’s concentrate on temperature stats for May and spring 2018 as a whole. Quoting from the article:

I highlighted in red NCEI’s assessment of record counts, which I’ve been keeping tabs on since 1/1/2000. One could write that we were “way overdue” for a hot May looking at record temperature ratios and averages. May during the 2010s has had the lowest ratio than any other month. Here is my monthly bar chart before May 2018:

Let’s take a look at the individual state ranking chart for May:

I haven’t seen a chart like this since March 2012 when that month saw it’s warmest March on record. The other shoe to drop from a very important climate change perspective was how wet it was up and down the East Coast. Back in the day when I was young in the 1970s and 1980s wet weather was accompanied by cooler than average conditions. Not any more. As we keep stating a warmer atmosphere holds more moisture; thus, potentially releasing heavier rainfall. Here are state precipitation rankings for May 2018:

Quoting from the NCEI summary:

As far as spring 2018 in totality goes we see more of the same climate change signatures:

We will wait and see if Europe as well saw it’s warmest May on record when global temperatures are assessed by the middle of June. G

Dear Diary. This evening it would appear that a low grade heat wave will continue into day 3 across most of Texas Thursday.Where the mercury will get well above 100 in drought plagued West Texas advisories are posted:

Looking at Thursday’s maxes people will have to take usual precautions for heat across the southern half of the country, which is fairly typical for early June, just a few degrees above average except at least ten degrees in West Texas: