It wasn’t so very long ago that a near record strong El Nino was the main factor spiking global temperature averages to record warm levels in 2016. Since then a weak La Nina occurred in 2017 lowering global averages closer to +1.0C above longer term climatology. I keep repeating that El Ninos are the catalyst acting on what carbon pollution is already doing to the planet, spiking temperatures.

The El Nino of 2015/16 was so strong that it caused the winters in the U.S. of the same years to be record warm. Record Arctic warmth from 2015-2018 I would argue was partially caused by heat released into the atmosphere from the El Nino. Now it would appear that after a brief break another El Nino is in the works. If strong enough we may see yet another spike on this chart in 2019:

We were warned. In June ’88 James Hansen said global warming was here & would worsen. It did. Earth got 1 dF hotter since; US 1.6 dF  Fires doubled, ice lost. Details on how warming has hit hard locally & globally #30YearsofWarming Day 1 of series. http://bit.ly/2HWzAcz 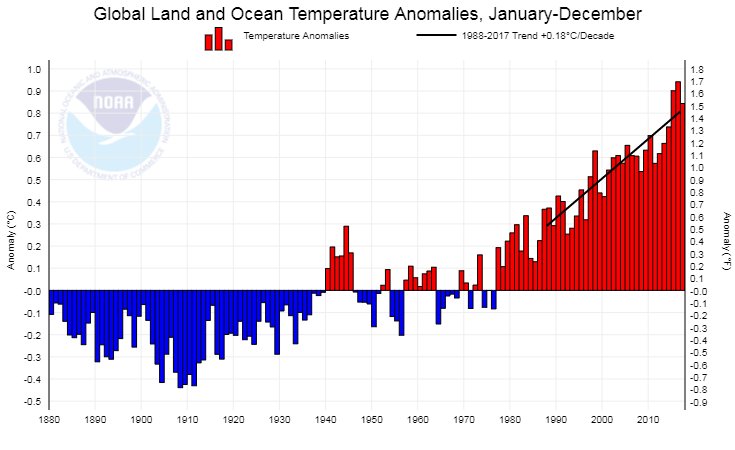 It’s fascinating to watch the evolution of sea surface temperature anomalies over the past 4 months… equatorial Pacific goes from cool anoms to warm anoms, and pool of cool anoms in deep tropical Atlantic expands and intensifies. #ENSO #NAO #climate @UMiamiRSMAS

Clearly the Pacific Enso zone is warming. As happens a lot with the advent of El Nino, conversely the tropical Atlantic waters have cooled. Will this El Nino become as powerful as that of 2016? Probably not, but since ENSO prediction, scientifically, is in its infancy I can’t make a good prediction:

The latest ECMWF model is showing a pretty strong signal for #ElNino later this year, but before taking it verbatim, remember last year’s forecast didn’t verify too well! 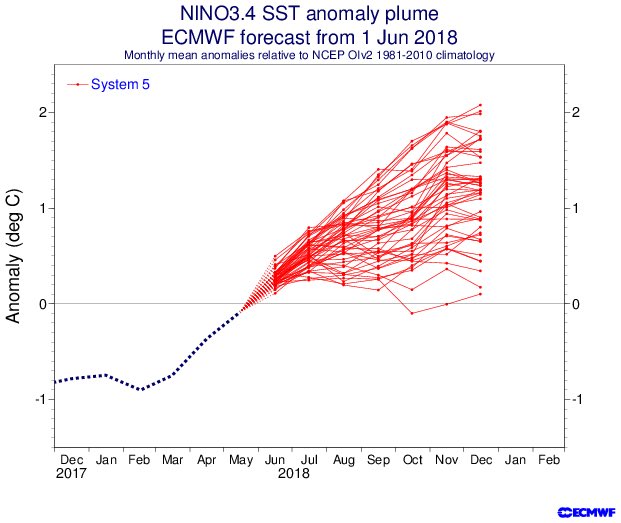 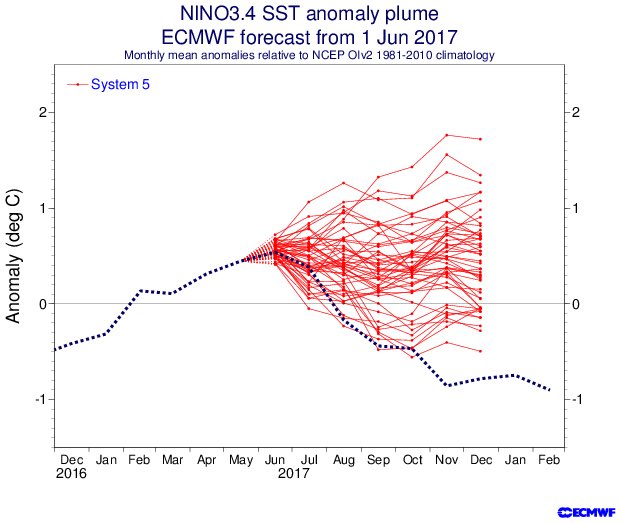 As one can see from Eric’s charts the European model did poorly in 2017, so there isn’t a 100% guarantee of an El Nino from late summer into fall, but all trends I am seeing point to that direction. We will see if the combo of at least a weak El Nino and cooler than average tropical Atlantic waters put a dent in the number of organized Atlantic tropical systems this season. Remember too that the stronger the El Nino the more influence there will be on ever warming global temperatures from man induced climate change.

Here is more information quoted directly from Dr. Jeff Masters post today. Also contained within the post is some very thorough global climatology for May 2018:

Odds for an El Niño event to form are predicted to increase as we head into the fall of 2018, with the June 14 CPC/IRI Probabilistic ENSO Forecast calling for a 51% chance of an El Niño event during the August-September-October peak of the Northern Hemisphere hurricane season. Those odds are up substantially from a 38% chance in the previous CPC/IRI outlook, which was issued in May. El Niño events typically reduce Atlantic hurricane activity, due to an increase in wind shear over the tropical Atlantic. The odds of El Niño are pegged at 64% for this coming winter (December-January-February), the time of year when El Niño events are typically at their strongest.

(Above) Sea surface temperatures (SSTs) in the benchmark Niño 3.4 region (in the equatorial Pacific) have been up to about 0.3°C above average over the past week, which qualifies as neutral conditons. Image credit: Levi Cowan, tropicaltidbits.com.

The current heat wave is peaking across the Midwest and Northeast today where advisories are extensive:

A hot and humid day in progress across much of the East this afternoon. If outdoors, please stay hydrated and wear light-weight clothing. Also, there is potential for severe thunderstorms (mainly damaging wind gusts) this afternoon evening across northern NY and New England. 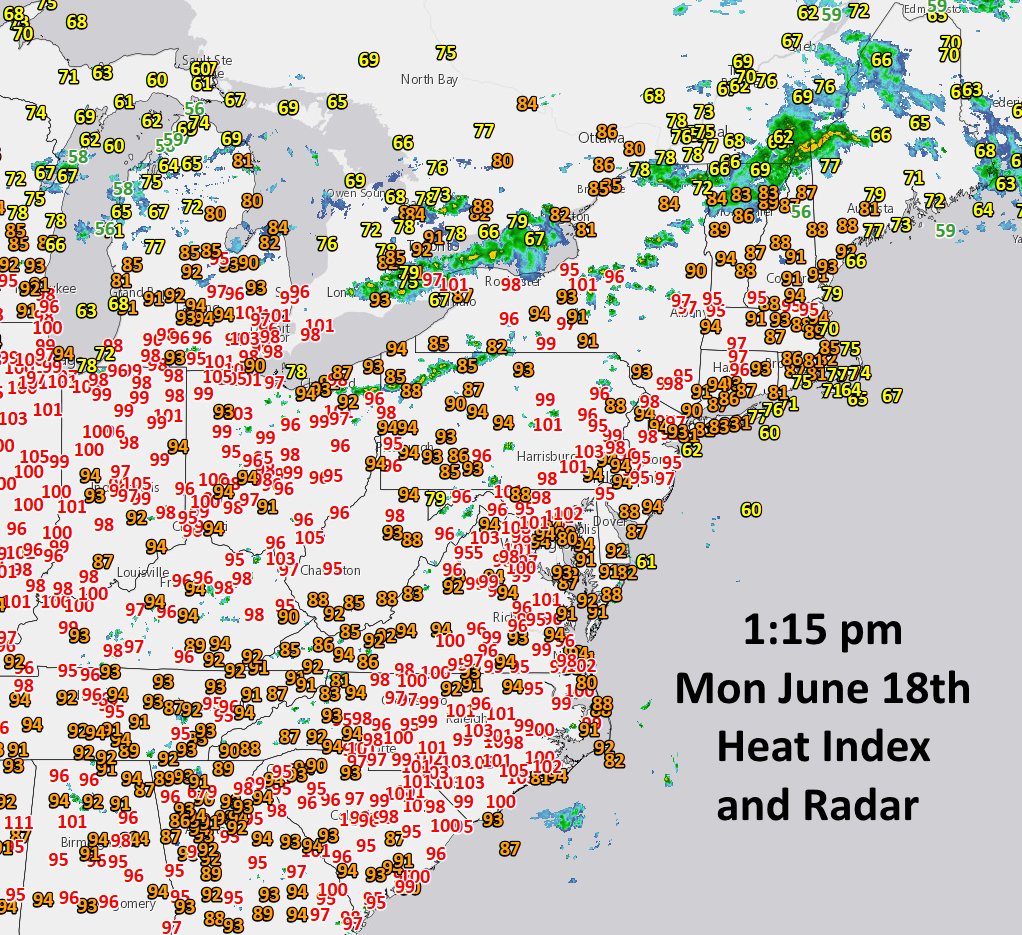 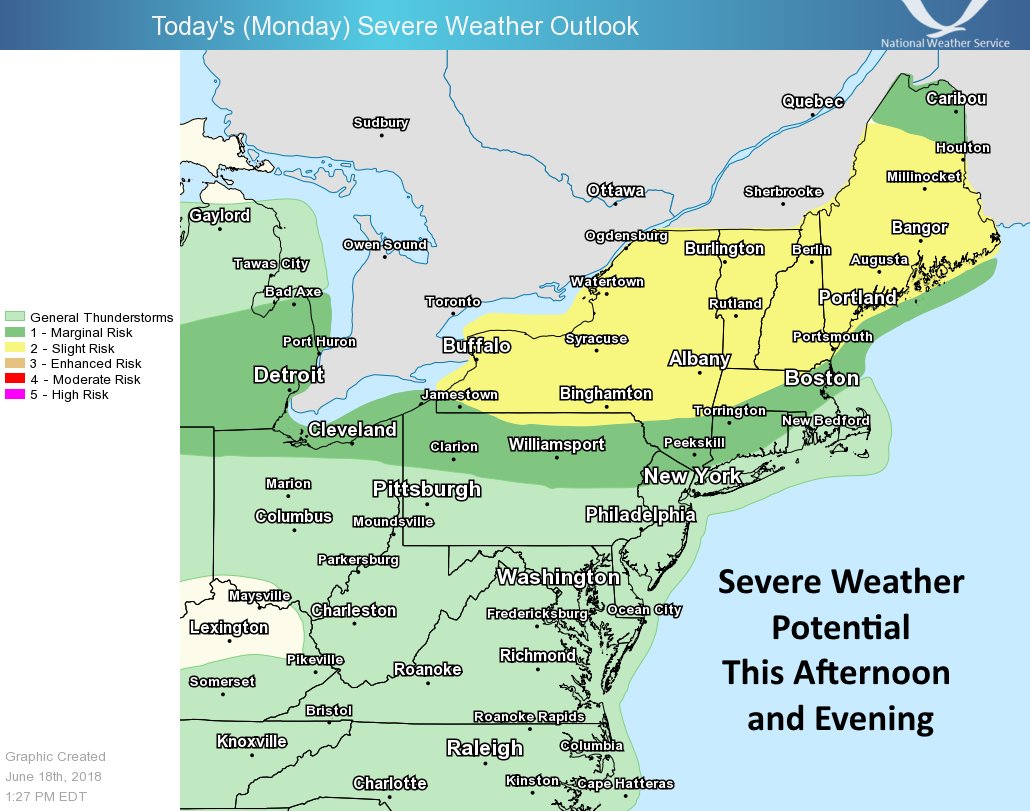 Tomorrow dangerous heat will break in the Midwest and Northeast but ratchet up a couple of degrees in the Southeast:

There were widespread maxes above 90F from the Southwest through the Plains and Midwest into the Northeast today. Here is a sampling of Monday’s records:

A sampling of some of the record highs that were tied, and in a couple of cases, broken, on this hot (and stormy) Monday across the Northeast.  #nywx #pawx #vawx 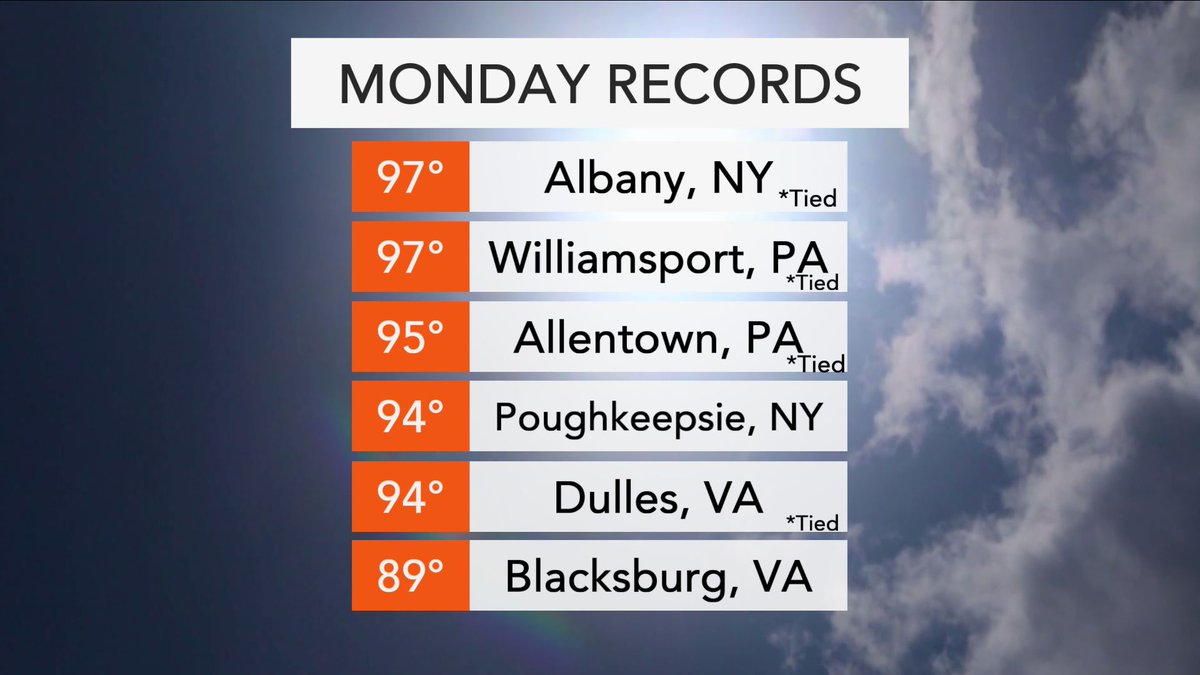