Way back in the stone age when I was studying history in high school I learned that as World War Two was beginning to go south for the Germans out of desperation they began to make gasoline out of potatoes. Thankfully, they couldn’t squeeze enough fuel out of spuds to win the war. I didn’t think about this history too much until just after the turn of the century when ethanol became all the  alternative fuel rage. What a great idea! Essentially plants were deemed as little biological batteries that could store energy for transportation using photosynthesis. We could grow corn (or spuds) to supplement expensive gasoline and help solve the climate crisis. Midwestern farmers loved the government subsidies for growing corn and the higher prices for that grain due to the demand for ethanol.

Gradually during the 2000s I learned that proposals and experiments were being conducted for fuels from switchgrass, sugarcane, algae, wheat; essentially anything that could be grown that could be turned into a fuel. Some experiments had taken place well before the second World War. There are three big problems with the overall idea of biofuels that scientists began to understand during this decade, the 2010s.

The first is what I will term robbing Peter to pay Paul. If you grow something it’s going to soak up or store carbon, which is a good thing. If you burn it for fuel most of that stored carbon is released back into the atmosphere, which is a bad thing, of course. Ethanol and other biofuels were touted as being “carbon neutral,” or those fuels that don’t produce a net increase of atmospheric carbon like fossil fuels. The premise was sound except when fossil fuels contained in fertilizer were used to grow crops such as corn and for tractors plowing fields and harvesting crops. Ethanol, though better than fossil fuels, adds carbon to the atmosphere. In Brazil the longstanding practice of using sugar cane for fuel is much better, being nearly a carbon neutral fuel.

The second big problem is using grains, such as corn, that have traditionally been used as food. It’s definately a bad idea to use rice, potatoes, barley, soy, and wheat for fuel, which a hungry planet needs. Too, as mentioned, when a grain is used for fuel demand increases such that prices also rise. We live in a world in which just the slightest increase in food prices leads to more hunger.

The third problem not many people think about. Burning any material containing carbon adds to air pollution. Some are worse than others, but solar and wind power don’t need exhaust pipes. As a kid suffering from asthma, take it from me, any substance polluting the air is not good.

To learn more about the extremely diverse world and complicated production of biofuels read this Wiki article:

So, it’s my opinion that solar, wind, hydro, and where possible, geothermal sources should be used to generate electricity, which can be stored in increasingly better batteries. Carbon should not be regurgitated, to use another word, for transportation. All electric vehicles are the real transportation key to sustaining civilization as we know it while protecting the climate.

Our U.S. heatwave will expand on Monday getting into the eastern Megalopolis area while remaining torrid in the Midwest and South:

Heat advisories have expanded into the eastern Great Lakes and Middle Atlantic areas:

NWS St. Louis‏Verified account @NWSStLouis
Excessive heat is the number one weather-related killer in the United States. Look Before You Lock. #mowx #ilwx 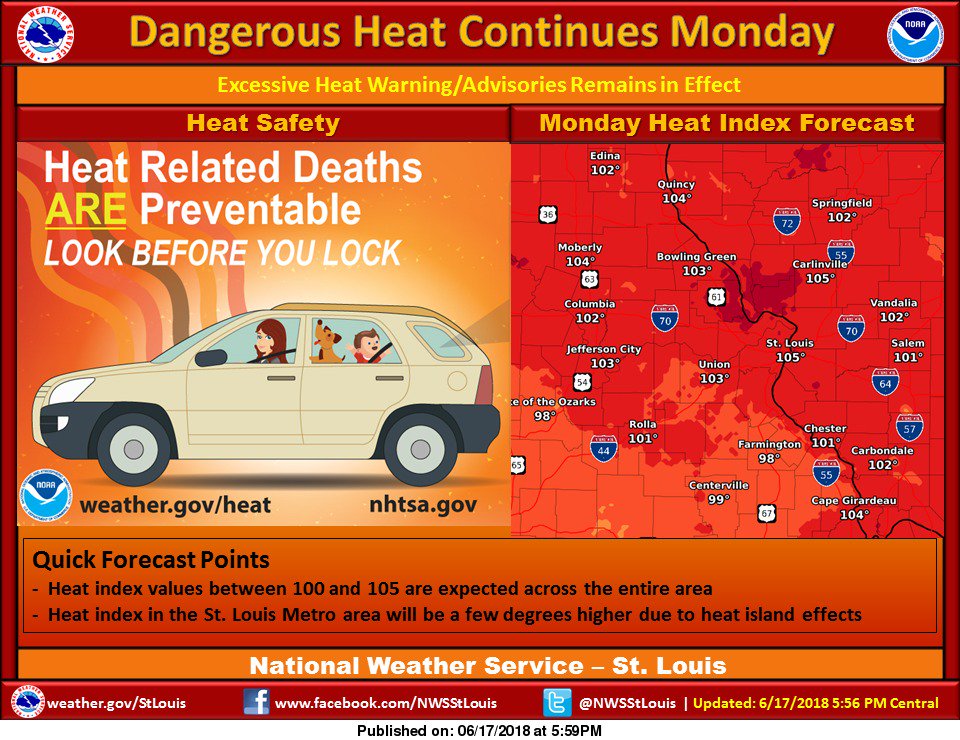 Another flash flood emergency declared tonight. This near Duluth where over five inches of rain has fallen and torrential rains remain over the area. It’s far from over and ten or more inches are a good bet. Late radar rain est. and Goes 16 showing intense mcs over Duluth. 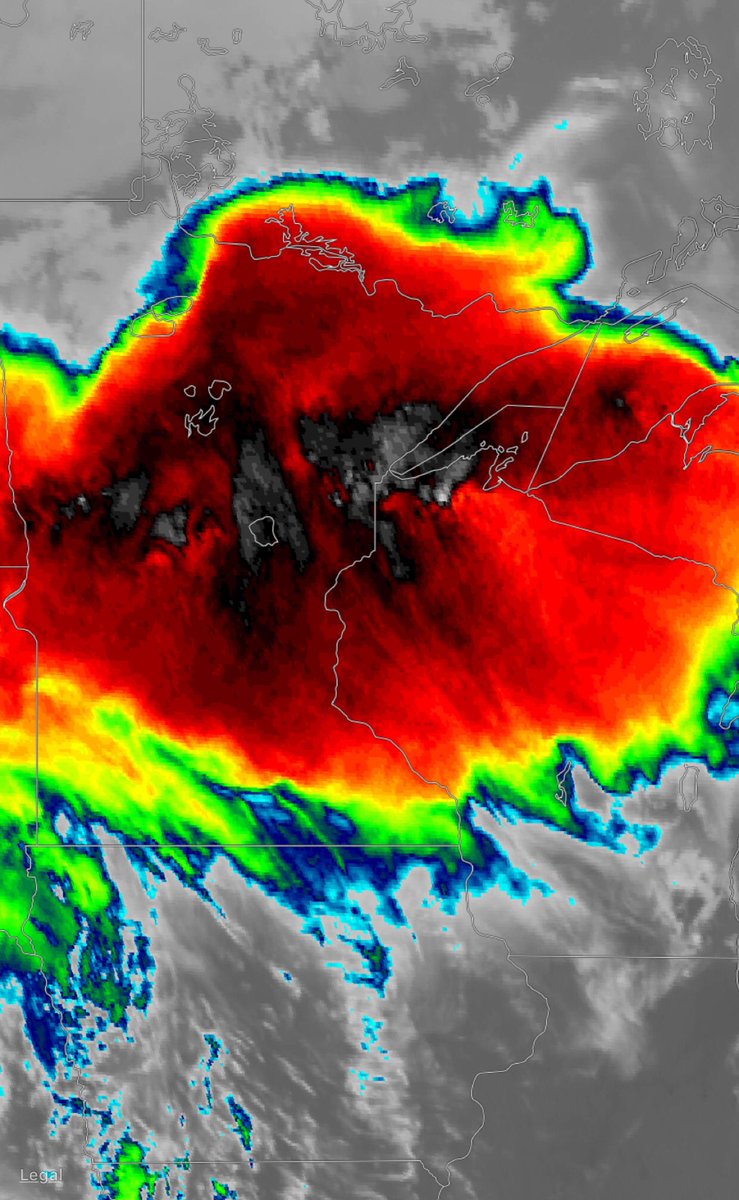 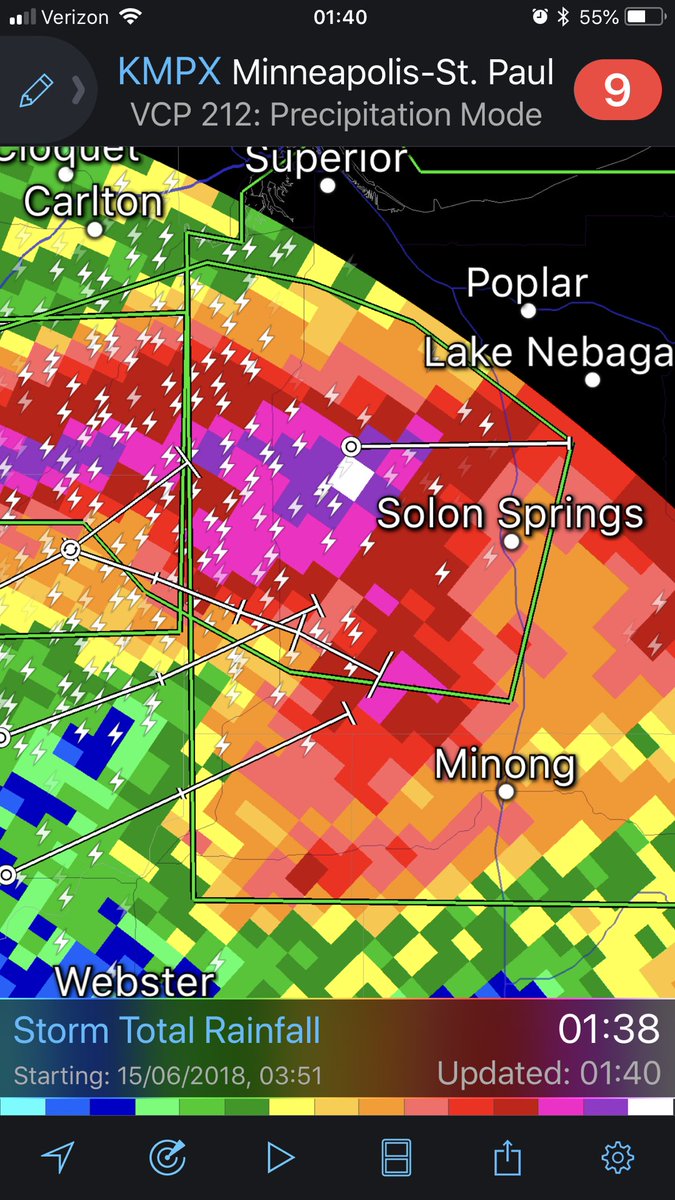