Most reading this post know that Doctor Hansen has gone to great lengths since the 1980s to convince the world that carbon pollution is a serious threat such that whole scale changes in energy policy and delivery are necessary world wide, even going as far as publicly protesting and being arrested. Since we are human most of us dealing with the climate crisis are only willing to go so far with self sacrifice as we influence others to change. Some write, some testify, some protest, some continue to churn out scientific studies, and some communicate and debate through social media. Many of us do all of the above while balancing life with our career as we roll along life’s path. Most are not willing to go so far as incarceration like Dr. Hansen, though. Perhaps if more activists were energy policy change might come faster. Perhaps not if there is a counterreaction. I’ll relate how I have dealt with my own demons at the end of today’s post.

This morning I saw this tweet from Doctor Mann:

Today the @WSJ published yet another wrongly-titled denialist op-ed. The title should have been “@SkepticScience Climate Change Denial Myth #113″ https://www.skepticalscience.com/Hansen-1988-prediction.htm …

7:24 AM – 22 Jun 2018
Due to the advent of Doctor Hansen’s 30th anniversary testimony week denialist are falling all over themselves writing false narrative pieces to try to prop up failing arguments as the world continues its relentless warming trend. In turn rebuttals debunk any false narratives and have been doing so for the past thirty years. Here is the graphic from the Skeptical Science article linked in Dr. Mann’s tweet:

In short, the main reason Hansen’s 1988 warming projections were too high is that he used a climate model with a high climate sensitivity. His results are actually evidence that the true climate sensitivity parameter is within the range accepted by the IPCC.

I wonder how many times Dr. Hansen has rolled his eyes or shook his head after reading more denialist tripe? My own journey since 1988 dealing with the climate issue has left me both disappointed in my fellow man yet hopeful for the future.

Back in 1988 I had already been employed at the Weather Channel for five years becoming comfortable in my role as a synoptic weather forecaster. Like most young men in their twenties I was enjoying my youth and not too concerned with the future, and thankfully at the time, secure in my profession. During 1988 a lot of us at TWC were amazed of the extent of  that summer’s heat wave and drought. On a shift some of my coworkers got into a discussion of the testimony before Congress of one Dr. James Hansen and his “new” concept of the greenhouse effect in association with carbon pollution. I listened intently but had not formed an opinion on the matter due to my ignorance.

I started to do some reading, which persuaded me that global warming due to CO2 pollution was occurring. Sometimes in our youth we believe what we want to believe. In my case since I was an odd ball weather forecaster interested in heat waves and droughts due to my experience with a nasty 1980 U.S. heat wave, anthropogenic global warming fit my meteorological world view at the time. To this day I think that some meteorologist can’t accept AGW because they are highly interested in cold weather phenomenon threatening  their chilly favored synoptic regime. A good scientist, though, will shrug off any personal world views once strong evidence to the contrary shakes preexisting thought.

As the 1990s progressed I got more argumentative with TWC staff  who discounted AGW. Arguments did get heated so thankfully during the time the company had a lax policy on work floor discussions. I did receive a lot of flack after the eruption of Mt. Pinatubo cooled the planet from 1992-1995. When the weather and planet warmed to record levels by 1997 the proverbial shoe was on the other foot. Still, many Mets who were experts denied AGW at TWC including Dr. John Hope, TWCs first renowned hurricane expert.

I remember getting into heated arguments with TWCs first severe storm expert in the late 1990s on climate change. In retrospect I never should have been the instigator of so many of these lively, loud discussions. At the time TWC was constantly airing daily set records, which more often than not were the warm to hot variety. I decided to catalogue these starting on 1/1/2000 to commemorate the start of the new millennium and to prove a few people wrong. By the mid 2000s TWC was using my counts in conjunction with aired climate summaries.

For a few years during the 2000s as a reward for being a good team TWC would host a holiday dinner for meteorologists in December. At the end of these dinners a guest speaker would do a presentation. Much to the chagrin of about half the staff, Dr. Jerry Meehl of UCAR was brought in to speak, about climate change in December 2005. After the dinner Ray Ban introduced me to Dr. Meehl, and I showed him my record count files, which he thought interesting since by that time a two to one ratio of warm to cold records was apparent. I emailed my weekly summaries to both him, Bob Henson, who at that time was also a part of UCAR, and Dr. Heidi Cullen who began airing her show on TWC, the Climate Code, in 2006. Once the Weather Service record count archive came on line in November 2008 I began replacing my counts with theirs, which still showed that 2-1 ratio for the 2000s. By 2008 into 2009 it became apparent that a scientific, peer reviewed study was possible using record counts, which Dr. Meehl took on as lead author:

The study essentially became my life’s work and my one big contribution to science. Certainly the work environment at TWC during the 2000s allowed me to do “extracurricular activities” besides my forecasting work, so I was able to help complete the study. The work environment changed during the 2010s as forecasting work loads increased. All the while it was interesting that most of my working group continued to deny AGW no matter what I did or said. By the end of my TWC career in 2014 I was keeping my big trap shut on climate change matters lest I upset too many wrong people.

I’m sure that Dr. Hansen ran into a number of people at NASA over the years that were denialists. As younger people both of us thought naively that evidence , once presented, would change enough minds to thwart any long term climate problems. Sigh. It is a hard, sad fact of this life to encounter people denying science, but those confrontations are crosses each climate scientist or those presenting climate science has to bear. My story isn’t so bad compared to others receiving threats like Dr. Mann or insults. Here is an example:

He just WILL NOT go away. Here is the follow up email to my personal Gmail account from my website related to my current climate bullying situation. As I reminder, I wrote a Forbes piece responding to this text in an email thread.

–“that article is all fluff, no substance. 100% propaganda. How can Marshall Sheperd claim to be a scientist, let alone a PhD meteorologist, a Fellow of the American Meteorological Society, and Past President of the AMS? He has apparently made a name for himself as “a black” supporting the prevailing paradigm, nothing more, nothing less. As we well know, those who play along are amply rewarded for their support. But it certainly cheapens the title of “Fellow””—

Tomorrow I’ll attempt to relate what climate scientists want to see happen in the future for part four, the last part of this segment.

I can’t stress enough that these days most heat related death comes in parked cars containing passengers while windows are up. Be careful out there!

An 18-month old boy died yesterday in the northern California town of Willits, after being inside a vehicle for as long as 10 hours. This is the 8th similar tragedy this month and the 17th in 2018. See http://noheatstroke.org/ 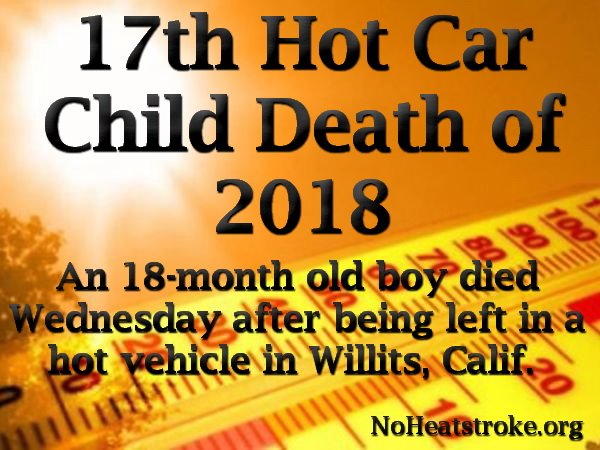 On Saturday temperatures across the nation won’t change much from today except we’ll tack in a few degrees in Texas: 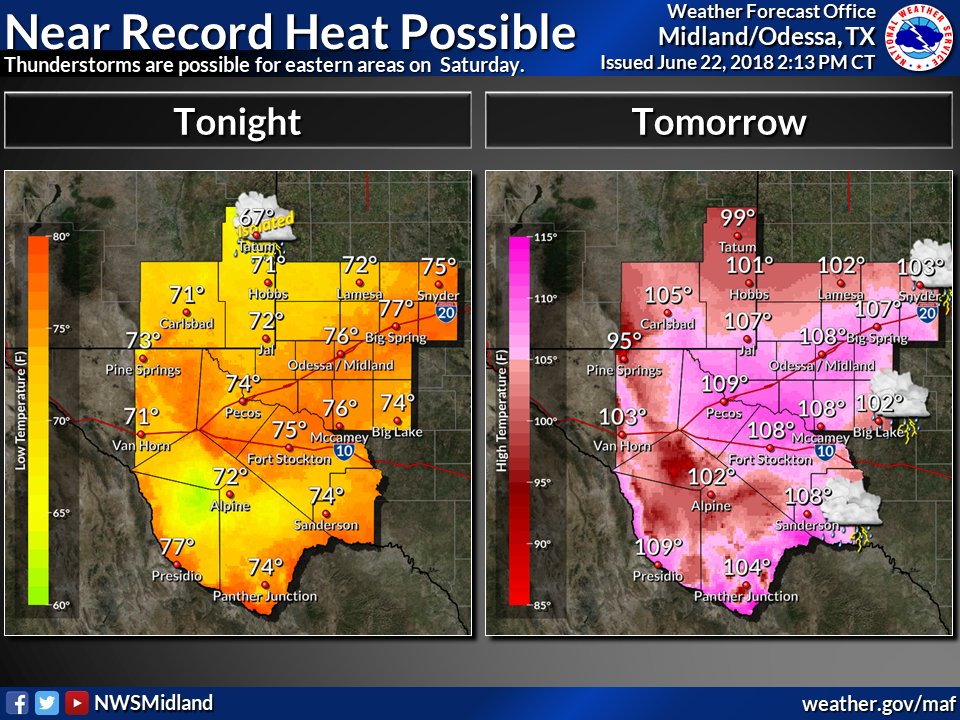 I will be adding more pertinent items to this post later today.