Saturday June 23rd… Dear Diary. The main purpose of this ongoing post will be to track United States extreme or record temperatures related to climate change. Any reports I see of ETs will be listed below the main topic of the day. I’ll refer to extreme or record temperatures as ETs (not extraterrestrials)😊. Here is today’s main climate change post related hot topic:

Today is the official date of James Hansen’s testimony before Congress in 1988.

Thirty years ago today, James Hansen took climate change out of the labs and into public. He was the Paul Revere we desperately needed. And he’s fought the good fight ever since

30 years ago today – June 23, 1988 – during a heat wave in DC, NASA climate scientist James Hansen spoke his truth to the Senate energy committee: Human-caused global warming was already detectable, and would grow far worse with time. https://www.axios.com/how-much-earth-has-warmed-since-hansen-testified-b6f8fdb4-484e-477f-b8b6-6ee320994dc0.html?utm_source=newsletter&utm_medium=email&utm_campaign=newsletter_axiosam&stream=top … via @axios 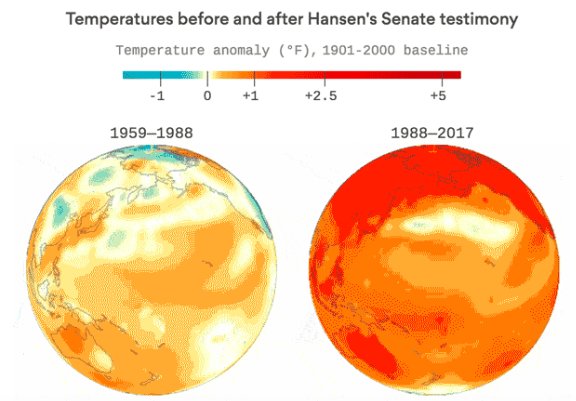 So, what to do moving forward the next thirty years? I’ve read Dr. Hansen’s book, Storms of My Grandchildren, which paints a bleak picture of the planet if nothing is done about carbon pollution. Dr. Hansen, now a man in his 70s like Bernie Sanders from his generation, continues to be socially active, behaving like a much younger person. The good doctor continues to advise us all on the best methods for dealing with the climate crisis. You can see some advice in his site here:

For example, posted on the site is a letter from Dr. Hansen in association with carbon capture:

Get Out of Jail Free Card: Carbon Capture

James Hansen I am minimizing Communications, so that I can (really!) finish Sophie’s Planet, while also providing expert testimony for several lawsuits aimed at using the judicial branch of government to force the other branches of government to do their job. However, there is enough popular misinterpretation of recent news about the cost of carbon capture that I should comment on that.
David Keith has done some of the most credible work on direct air capture of CO2, so his recent paper1 in Joule reporting on the cost of carbon capture deserves attention. Media reports emphasized that these reported costs were lower than costs estimated in a report by the American Physical Society (APS) in 2011. This caused some people to believe that we may be on the way to a “get out of jail free” card, the hope of many that technology will come to the rescue, so we do not need to be so concerned about the mess we are leaving for young people.

Unfortunately, the new news on carbon capture costs provides no support for the notion that we can solve the climate problem without fossil fuel phase-out. On the contrary, the Keith et al. study reinforces our concerns.

Many people failed to notice the matter of units. Keith reports a cost of $113-232 per ton of CO2 for plant designs in which the resulting CO2 is ready for sequestration The cost per ton of carbon (tC) is higher by the factor 44/12. So the reported cost is $414-850/tC.

Furthermore, none of the four cases include the cost of carbon storage! According to the 2015 National Academy of Sciences report on CO2 removal2 the costs of geological sequestration are $37-73/tC. So the total costs for capture plus storage would be $451-923/tC.

Note that we used the cost range $113-232/tCO2 from the Keith paper. They also give a cost range $94-232/tCO2, which is what the media picked up on. However, the $94 case has the CO2 being used to make a liquid fuel that, when burned, puts the CO2 back in the air! So there is no negative emission. In fact, that total process would have positive emissions, at least to some degree.

In Young People’s Burden we were aware that the cost estimates from the APS study were high. Based on many studies referenced in our paper, we chose $150-350/tC as an optimistic estimate of the potential future cost. The low end of the cost range $451-923/tC based on Keith et al. is about 30% higher than the upper end of our range!

In Young People’s Burden we show that even our very optimistic cost of carbon capture results in an unbearable debt for young people, if high emissions continue unabated. The new estimates only reaffirm that conclusion. There is no prospect for a Get-Out-of-Jail-Free card.

One of the legal cases3 now underway is an effort to block the Trump government from opening up a huge new area of coal mining in Montana. The total coal resources in the basin in question are twice the quantity produced in the entire U.S. since 1949! Burning even a fraction of these resources would leave an astronomical cost for young people, as I show in the linked declaration I submitted to support the case against expanding that mining. It makes no sense to exploit these resources, serving only to enrich a handful of people. Most of the coal would be shipped to the Far East, but, in the end, I do not believe that the United States can escape either the moral or legal

Obviously the good doctor like most climate scientists thinks that current methods for carbon capture aren’t worth the proverbial price of admission.

There is one big point moving forward I read in Storms of My Grandchildren and elsewhere that is quite controversial. Dr. Hansen believes that nuclear energy should be a big gun in our arsenal to save civilization from the onslaught of climate change. This isn’t the same  energy generated from current nuclear plants, rather from generation 3 and 4 facilities. Here is a Guardian piece from 2015 in which Dr, Hansen made his case for nuclear:

Quoting Dr. Hansen from the article:

Nuclear power, particularly next-generation nuclear power with a closed fuel cycle (where spent fuel is reprocessed), is uniquely scalable, and environmentally advantageous. Over the past 50 years, nuclear power stations – by offsetting fossil fuel combustion – have avoided the emission of an estimated 60bn tonnes of carbon dioxide. Nuclear energy can power whole civilisations, and produce waste streams that are trivial compared to the waste produced by fossil fuel combustion. There are technical means to dispose of this small amount of waste safely. However, nuclear does pose unique safety and proliferation concerns that must be addressed with strong and binding international standards and safeguards. Most importantly for climate, nuclear produces no CO2 during power generation.

Others disagree with Dr. Hansen thinking that wind and solar power alone are much better suited for any future energy needs:

This time includes 3.5-6 years to find a site, obtain a permit for the site, and obtain financing for the reactor, 2-3 years for the review and approval of the construction permit, 0.5-1 years between permit approval and issue, and 4-9 years for construction. (Jacobson, Energy and Environmental Science, 2, 148-173, 2009).

On the other hand, onshore wind and solar require an average of 2-5 years. A wind farm takes an average of 1-3 years for siting, purchasing or leasing land, monitoring winds, negotiating a power-purchase agreement and permitting. The construction period for a large wind farm is 1-2 years. A solar photovoltaic or concentrated solar power plant is also 2-5 years. Geothermal requires 3-6 years. (See citations in Jacobson, Energy and Environmental Science, 2, 148-173, 2009).

Nuclear is not carbon free and emits 6-24 times more carbon-dioxide equivalent emissions than wind per unit energy produced over the same 100-year period. Such emissions include those during (a) planning, permitting, constructing, operating, refurbishing and decommissioning a nuclear plant versus a wind turbine and (b) the emissions associated with reducing carbon sequestration in soil by covering the soil with impermeable material or by mining.

Personally after considering everything and I do mean everything I have read, I agree with Bill McKibben that there should be World War Three, only this time against climate pollution and any polluters, which does not include nuclear power:

“Turning out more solar panels and wind turbines may not sound like warfare, but it’s exactly what won World War II: not just massive invasions and pitched tank battles and ferocious aerial bombardments, but the wholesale industrial retooling that was needed to build weapons and supply troops on a previously unprecedented scale. Defeating the Nazis required more than brave soldiers. It required building big factories, and building them really, really fast.”

I wholeheartedly agree. Anyway, Happy Anniversary Dr. Hansen. I know that any celebration is only small consolation for being correct. A  much bigger present would be a clear way moving forward out of this climate mess. Tomorrow we will look at the prospects for another eye opening heat wave for the country going into July.

We’re off to a warm start today! Midland’s low temperature this morning was 78°F, which ties the record warm minimum temperature for today’s date, first set back in 1951. We’re still on track for near record highs this afternoon, so stay cool and keep hydrated!

On Sunday temperatures will come down a notch in the Southwest. It may be hot enough in west Texas to record a few “ET” reports there:

Don’t look for any relief in the south-central or Southeast states.