Wednesday July 18th… Dear Diary. The main purpose of this ongoing post will be to track United States extreme or record temperatures related to climate change. Any reports I see of ETs will be listed below the main topic of the day. I’ll refer to extreme or record temperatures as ETs (not extraterrestrials)😊. Here is today’s main climate change post related hot topic:

Tangling With Climate Trolls…Or Not

When the United States was fighting in the Pacific during WWII it was decided that one of the best ways to win the war was to island hop, or not to engage the enemy on every Japanese held island. Rather, U.S. generals decided to fight for control of strategically necessary pieces of geography to attain ultimate victory. It would have been a waste of precious men and resources to fight the Japanese on every atoll and small island, so these areas were bypassed. The strategy did work. So too now in the “climate war” for writers and scientists most find that it is not worth the trouble or energy to engage what I’ll term small “climate trolls.” No, we aren’t fighting with guns but with logic and information to sway enough people that climate change is occurring to prevent almost unimaginable future suffering of mankind.

On this site I have stated over and over that any debate on whether or not man is behind increasing climate change is passé. Now any meaningful scientific discussions here are about “how soon and how bad” any future change will be. Personally I just don’t engage denialists since leaving The Weather Channel. I learned my lessons about engaging denialists all to well in my 30+ career there. Others still wish to sensibly debate doubters thinking that by doing so positive results will happen. Perhaps for open minds, but not “climate trolls.” Propaganda from trolls does need to be addressed and engaged when it’s deemed strategically important to win the climate war, which I’m leaving to others for now. When one does decide to engage a climate troll, or the “willful ignorant” on Twitter or some other social media platform, what is the best course of action, engagement to show their ignorance or ignoring them altogether?

You can see here who the troll was that instigated a long Twitter thread yesterday:

Replying to @pepmorabito
What is there to say, when confronted with evidence of a warming trend you move the goal posts to reductions in co2 emissions. When confronted with rising co2 levels you then target bystanders. Got something of content to discuss or are you just an empty troll?
12:45 PM – 17 Jul 2018
Here is one of my friends thoughts in what to do with “green, environmental trolls:”

Ignoring the trolls is what got us into this Trump mess, isn’t it? Should people who lie in a public forum not be confronted with truth and facts?

12:25 PM – 17 Jul 2018
I found that another climate scientist, Robert Fanney, had more thoughts on the willfully ignorant who try to spread scientific untruths on social media here:

For example, the myth that the science is a ‘liberal fraud’ aimed at ‘world dominance’ through the ‘UN’ is comparable to similar myths spread about Jews and other targeted groups. Its aim is to demonize and spread false fear.

In this way, fear of climate science has been wrapped around the whole nasty ‘fear of other’ we see now. How do you stop it? How do you stop racism or any other form of bigotry? But it is a dark thing that the fossil fuel industry has turned scientists into a targeted class.

Just to add — I don’t want to be here. I’d rather be able to have unexploited open conversations about real facts. But that’s not our present reality. And in this one where there’s nasty targeting of scientists going on, I just can’t in good conscience stand by.

There are professional trolls who fool many people because people have confirmation bias. They need to be confronted. Whereas, the angry, silly trolls should be encouraged to speak as much as possible, and should be given the last word.

Yea, you need to block that dude and move on. He is not worth the time and will have no impact on anyone. If he is even real.

9:42 PM – 17 Jul 2018
P.S. The troll blocked the Climate Guy before I got a chance to block him.😉
Each climate expert and writer is human and must decide how to wage the climate war such that their own sanity will be in tact. How many proverbial slings and arrows can one take before getting wounded if one uses social media frequently? Should trolls be left to their own devices muddying the waters in a 2018 world in which there is more doubt than ever as to what is truth or fake news?
At least public opinion is starting to turn towards climate scientists favor just like WWII changed in favor of the Allies in 1943. A cornered animal can be very dangerous, though. I wonder what Kamikaze tactics climate change denialists will have up their proverbial sleeves the next few years. Unlike WWII Japanese warriors ignored on small islands it’s hard to isolate climate trolls in the climate war due to the internet, which can be a double edged sword. We’ll bring this subject up next year to see how the climate war for minds and yes hearts, as well, is going.
…………………………………………………………………………………………………………
And now to an update on our western heat wave. Tomorrow heat will get brutal even by Texas standards across the south-central states:

Firefighters will continue to have their hands full with spreading wildfires due to dangerous heat in the West. It’s interesting that the last time California dealt with record heat this season, torrid temps first made an appearance in west Texas. On the flip side we might see some cool ET reports from the Midwest the next couple of weeks given that cold systems for this time of the year will continually drop southward through the Great Lakes.

Dangerous multi-day heatwave expected by this weekend across portions of the Southern U.S. Record high temperatures exceeding 100 degrees are possible for many locations with heat indices between 110 and 120 degrees possible! More info: https://www.wpc.ncep.noaa.gov/#page=med 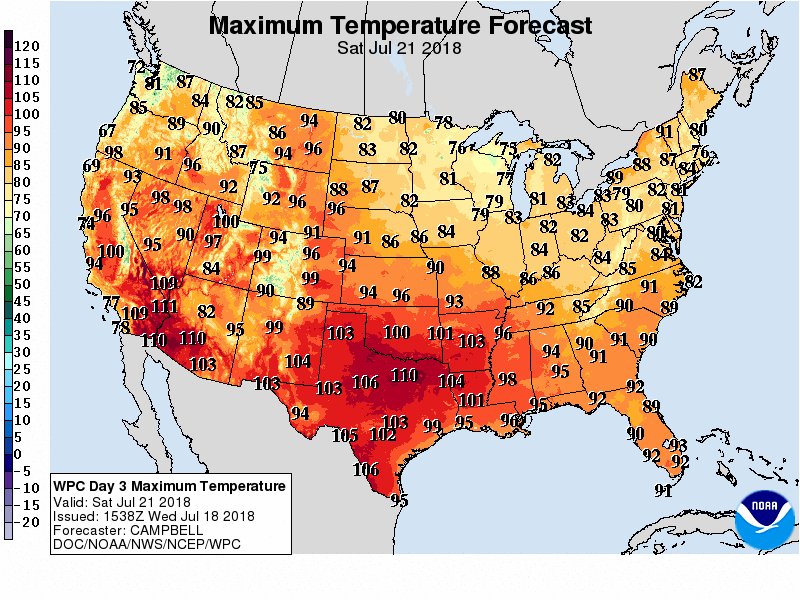 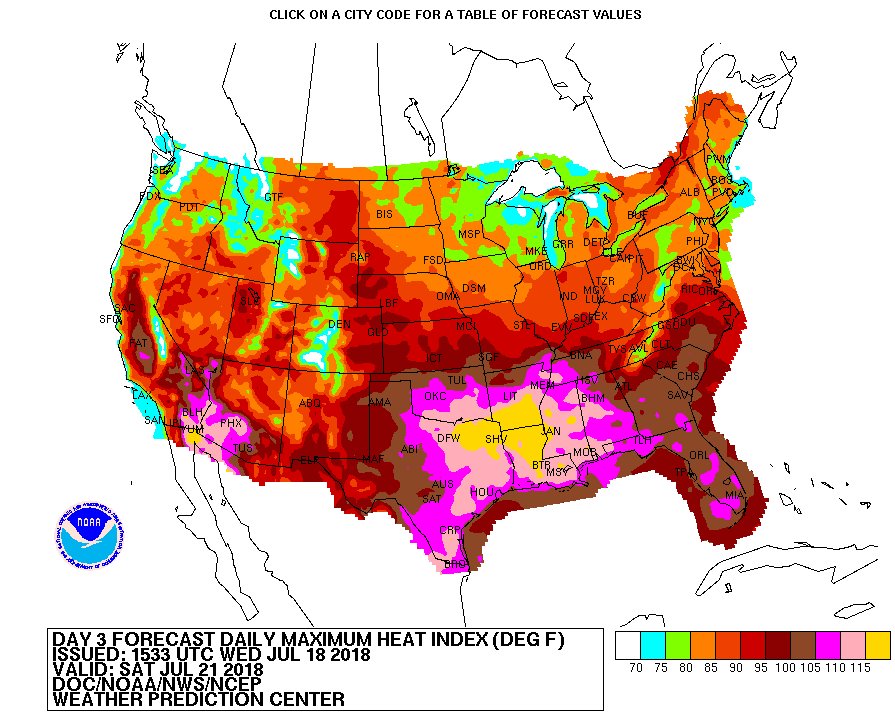 1:03 PM – 18 Jul 2018
Unfortunately it will only get hotter next week from California into the Pacific Northwest as a strong ridge retrogrades again from New Mexico to get centered over the West Coast by next Wednesday:

On the international front it has gotten extremely hot in Japan and Scandinavia: 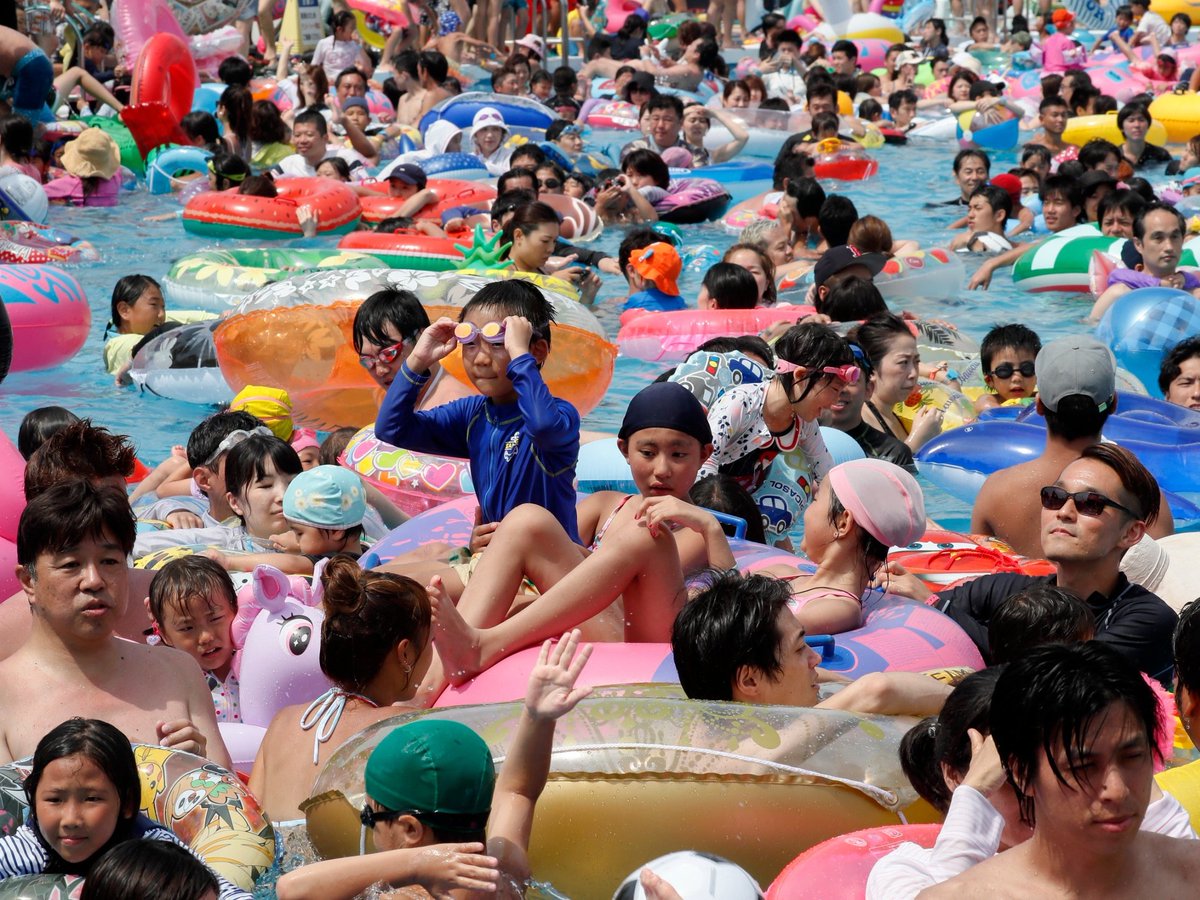 Powerful photo taken by CW McGowen who was visiting Yosemite over the weekend. A massive plume of smoke rises through the sky.

The #FergusonFire has burned 17,319 acres and the fire is 5-percent contained. 108 structures threatened and 70 of them are homes. 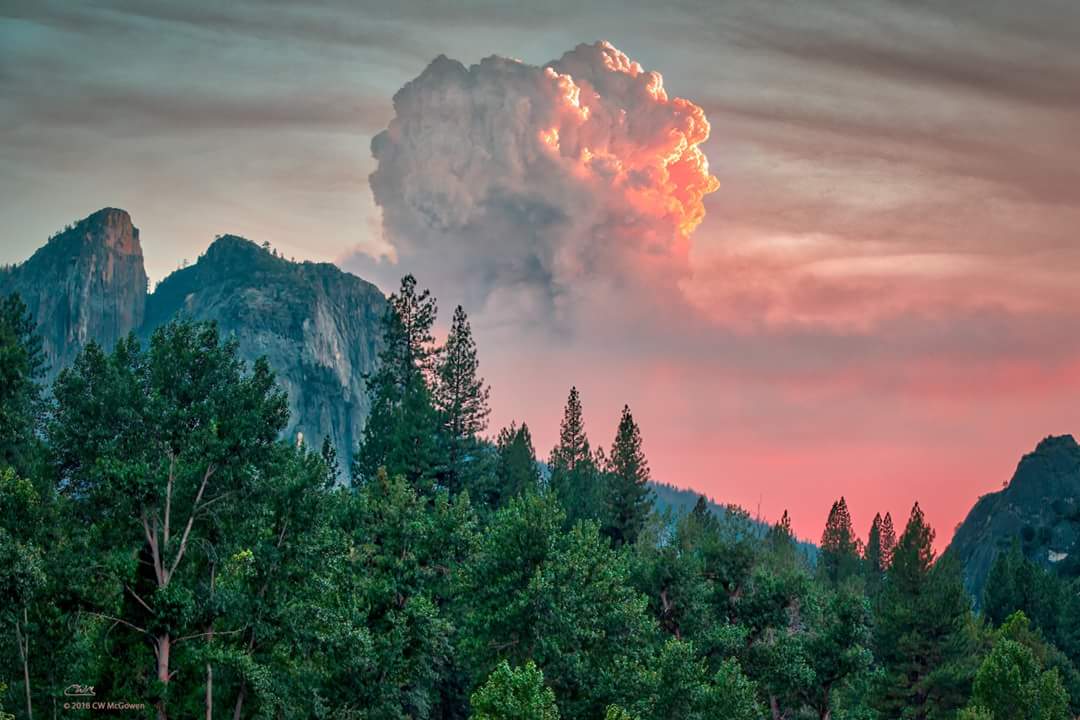 It’s no wonder that heat advisories have been greatly expanded in the central and southern Plains: