Dee  Friday August 3rd… Dear Diary. The main purpose of this ongoing post will be to track United States extreme or record temperatures related to climate change. Any reports I see of ETs will be listed below the main topic of the day. I’ll refer to extreme or record temperatures as ETs (not extraterrestrials)😊. Here is today’s main climate change post related hot topic:

Before getting started on today’s main topic I’d like all reading to be aware of this new organization: 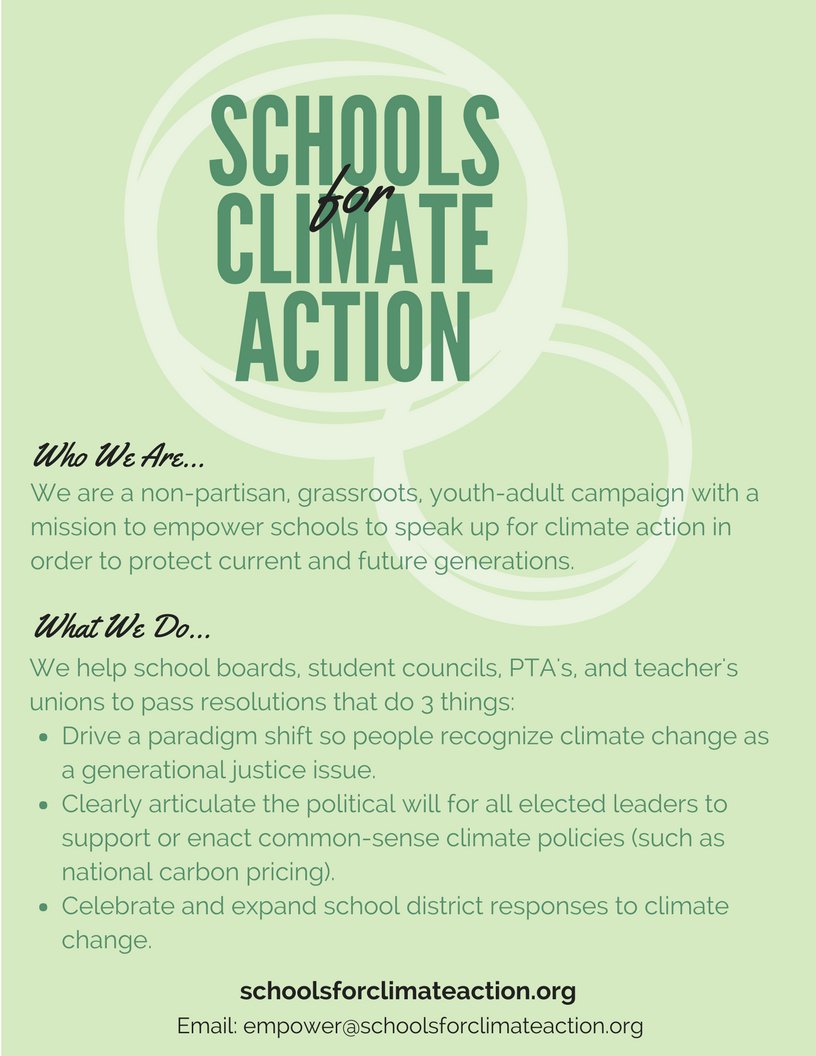 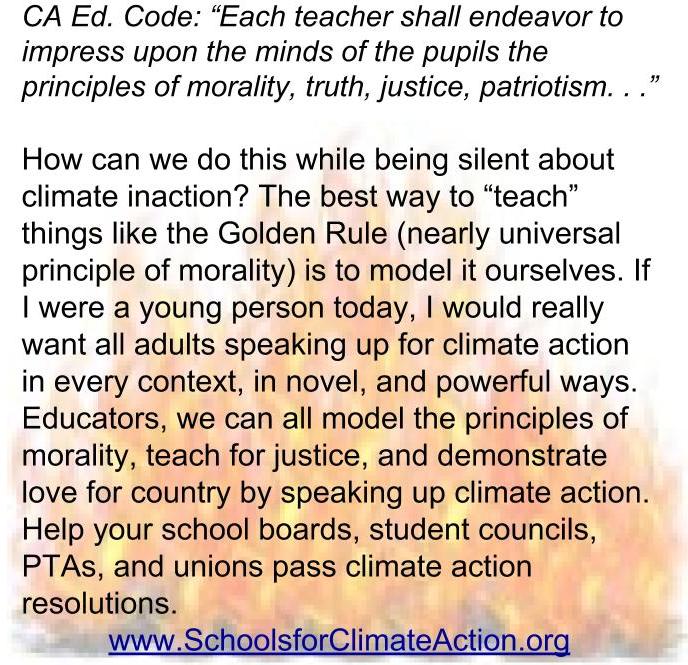 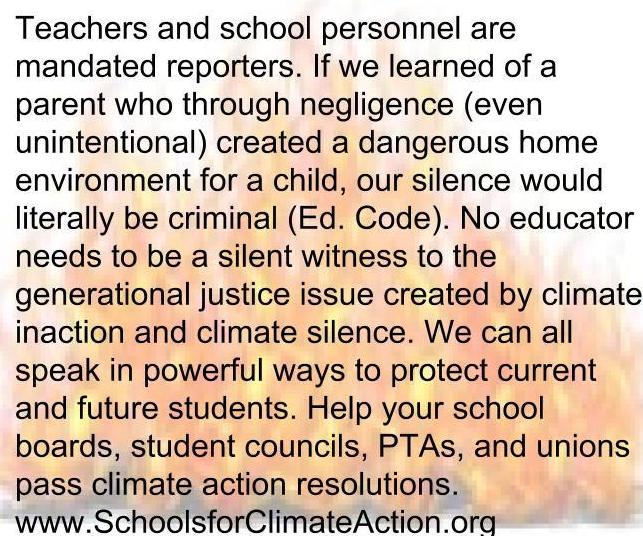 It’s been my opinion since about the year 2000 that education will be the biggest key to solve the climate crisis not only in this country but elsewhere around the planet. Millennials and post Millennials who are just now coming of age that were born around the turn of the century have the future in their hands. In turn they will be educating their kids on how to both politically mitigate and adapt to a rapidly changing and warming  climate as the years roll by this century. SchoolsforClimateAction.org is one educational group that must grow and flourish for civilization to survive.

Now let’s look at Europe. If you have been following my posts and climate/weather events this summer you know that today the Iberian Peninsula could be seeing all-time record maxes. It’s verification time folks, and this gentleman is sending out the latest information: 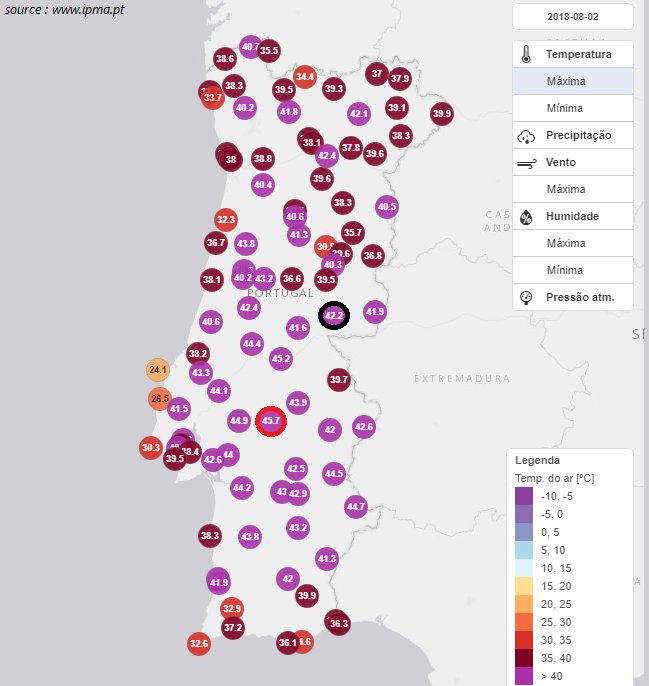 P.S. I’m beginning to learn some French looking at all of Etienne’s messages. Anyway, it looks like Portugal has gotten up to 46.4C so far.

As Etienne notes in this thread establishing old records for Europe can be complicated, unfortunately. Old measurements aren’t as reliable as those of younger American counterparts:

[1/*] while the 48 °c seems to be able to be exceeded in the next few days on the Iberian Peninsula, especially in Portugal, we logically hear about possible absolute record of European heat.
But what is the current European record? The answer is not so simple…

2:00 PM – 2 Aug 2018
I’ll post more verification material in this space later today. Here are some more new news pieces on European heat posted today:
This one is rather bizarre but noteworthy: https://www.nytimes.com/2018/08/02/world/europe/sweden-kebnekaise-heat-wave.html
Apparently Sweden lost its high point because of the record heat sweeping across the continent melting the glacier at the top of mount Kebnekaise.
Of more importance are the effects on everyday life around Europe as reported by this article:
https://www.reuters.com/article/us-europe-wheat-harvest/heatwave-ravages-european-fields-sending-wheat-prices-soaring-idUSKBN1KN0L9
Quoting from Reuters:
PARIS/MOSCOW/HAMBURG (Reuters) – Searing heat has devastated wheat fields across northern Europe while a combination of dry conditions and extreme rain in the Black Sea have hit output estimates, with prices soaring on fears of further crop damage.

Evidence of serious harm to crops is growing as harvesting heads north in Germany, the European Union’s second largest wheat producer, and in Scandinavia, prompting further cuts to estimates for the 28-member bloc.

The consultancy last week cut its forecast for this year’s soft wheat harvest in the EU, collectively the world’s largest wheat grower, below 130 million tonnes, a six-year low, and Defois said it could revise the estimate again.

Scandinavia and other Baltic states have also suffered, with Sweden’s wheat crop seen falling 40 percent while in Britain, where wheat crops are expected to fall to a five-year low, farmers are anxiously awaiting results as the harvest moves north.

“Wheat prices have surged more than 20 percent on European and U.S. markets in the past three weeks on mounting worries over global wheat supplies. Prices were also supported by a severe drought hitting crops in Australia.”
I highlighted this last part because we know in history that many conflicts like the French Revolution in the 18th century and most recently the Syrian Civil War were sparked by hungry bellies. The price of wheat and other grains such as rice are another of my “canaries in the coal mine” that will let all know how serious global warming is affecting the planet’s food supply. A 20 percent increase in wheat prices probably won’t starve many people, but will put a strain on those with low food budgets…something to watch this coming fall and winter.
On our little tour of Europe today here is your German lesson.😃

How extreme is this year? The median temperature at the secular station Potsdam from April-July for 1893-2018.2018 has surpassed the old record of 2007 by almost 2 °c! Compared to the medium of the first 30 years of the data series, the deviation is saturated 4.3 °c. #Hitzewelle 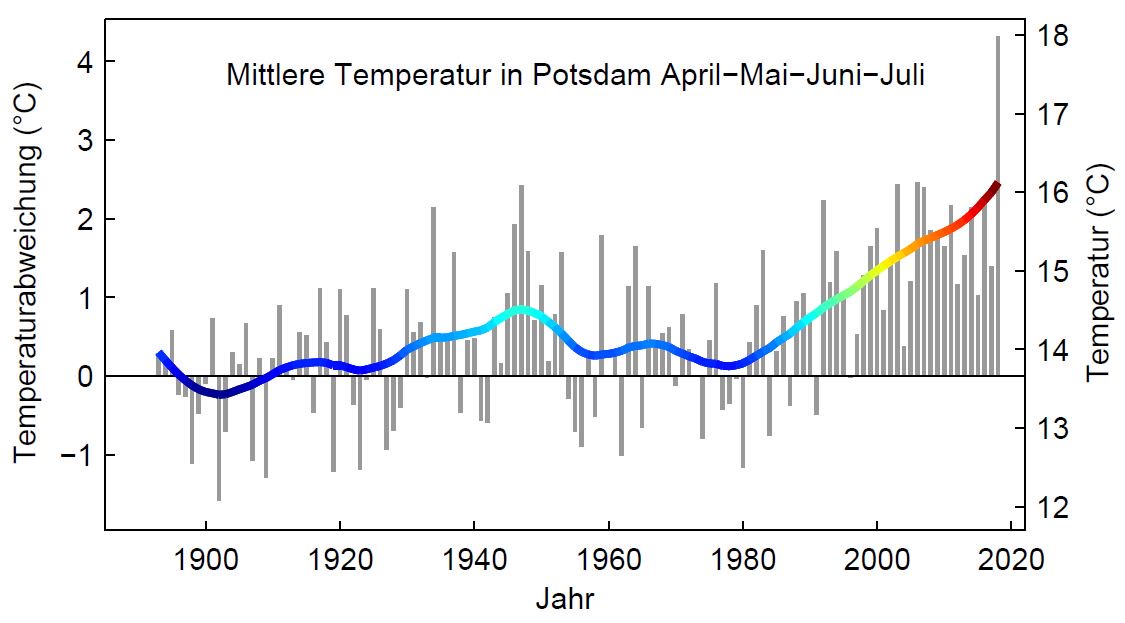 April to July have been very hot in Germany: The average temperature of that period in 2018 was much higher than in any other year since beginning of systematic observations (1881), as shown in the plot of @DWD_klima (timeseries 1881 to 2018). @WMO @CopernicusECMWF 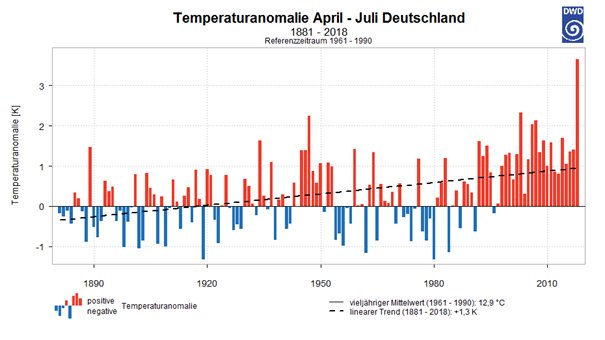 A rare “Particularly Dangerous Situation” Red Flag Warning has been issued for portions of eastern California and western Nevada, including the Lake Tahoe area, amid critical fire conditions. https://forecast.weather.gov/wwamap/wwatxtget.php?cwa=rev&wwa=red%20flag%20warning … 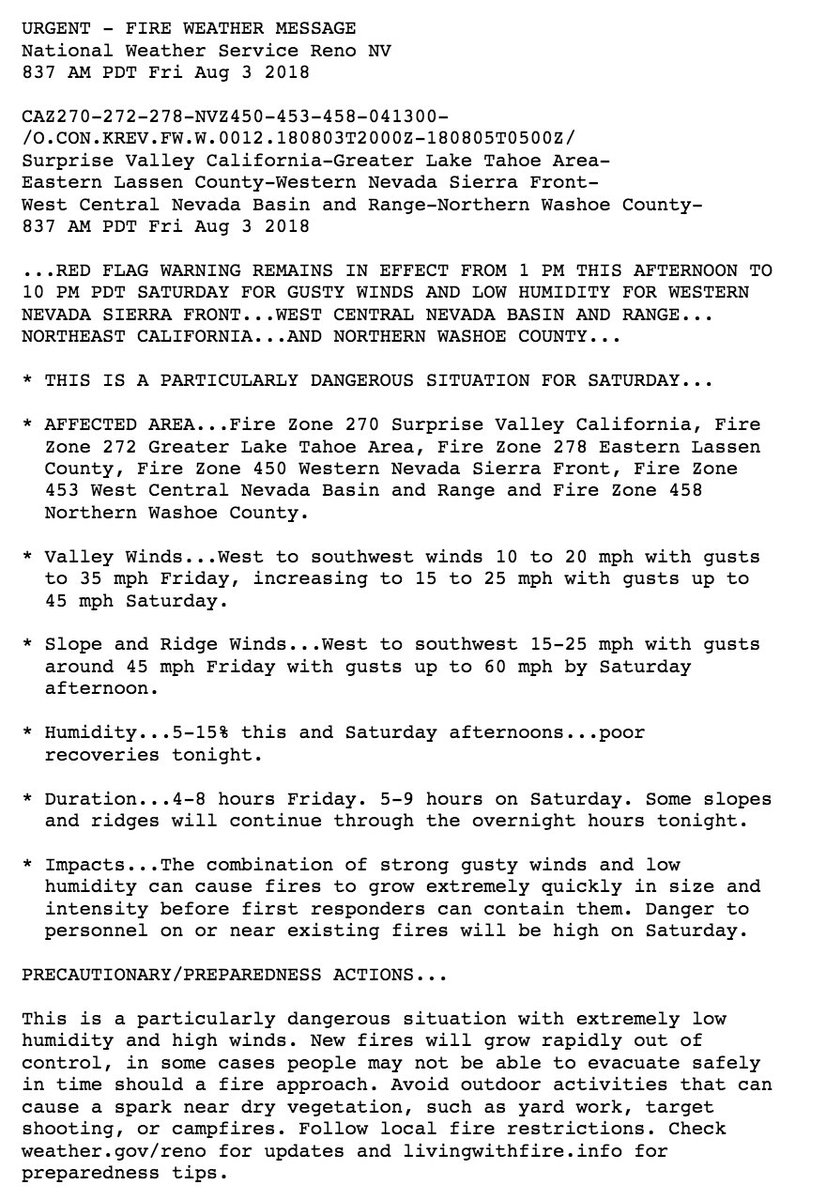 Saturday we finally will see some cooler conditions in Northern California, but windier conditions may offset any inroads firefighters may make:

Typical August heat below record limits will prevail over the rest of the nation on Saturday.
In other news today:

“2018 Would Still Be A Climate Hellscape If We Acted 30 Years Ago” by @AlexCKaufman for @HuffPost:

Depending on the final rating, the Redding “fire tornado” could end up being one of the, if not THE strongest tornado to hit anywhere in California. (Depends how it’s classified.)

We can add this one to California’s fast-growing “bizarre weather of 2018” file. 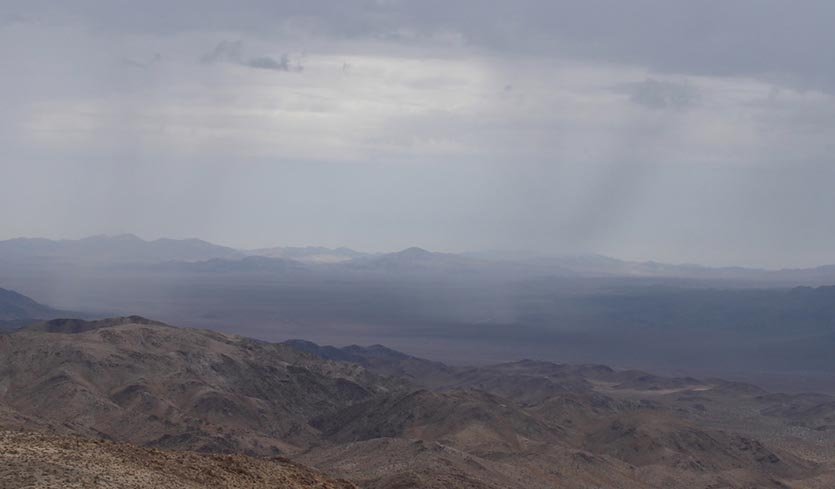 This is an amazing stat!! Rain at 119 degrees. Hottest temp on record to produce rain. It means that not only is Earth getting hotter but also more humid. And that is the link between a changing climate and health. https://www.wunderground.com/cat6/Hottest-Rain-Record-Rain-falls-119F-Imperial-California … #MetsUnite @1o5CleanEnergy @ClimateComms
8:20 AM – 3 Aug 2018

“Increased atmospheric CO2 concentrations go hand in hand with oxygen loss in the ocean, and this is the first demonstration that the CO2 release from human activity could be large enough to turn parts of the ocean into a toxic brew,”

Nuiqsut, with about 400 residents, sits some 250 miles north of the Arctic Circle.

Historians will look back at page 9 of today’s Times with great interest. 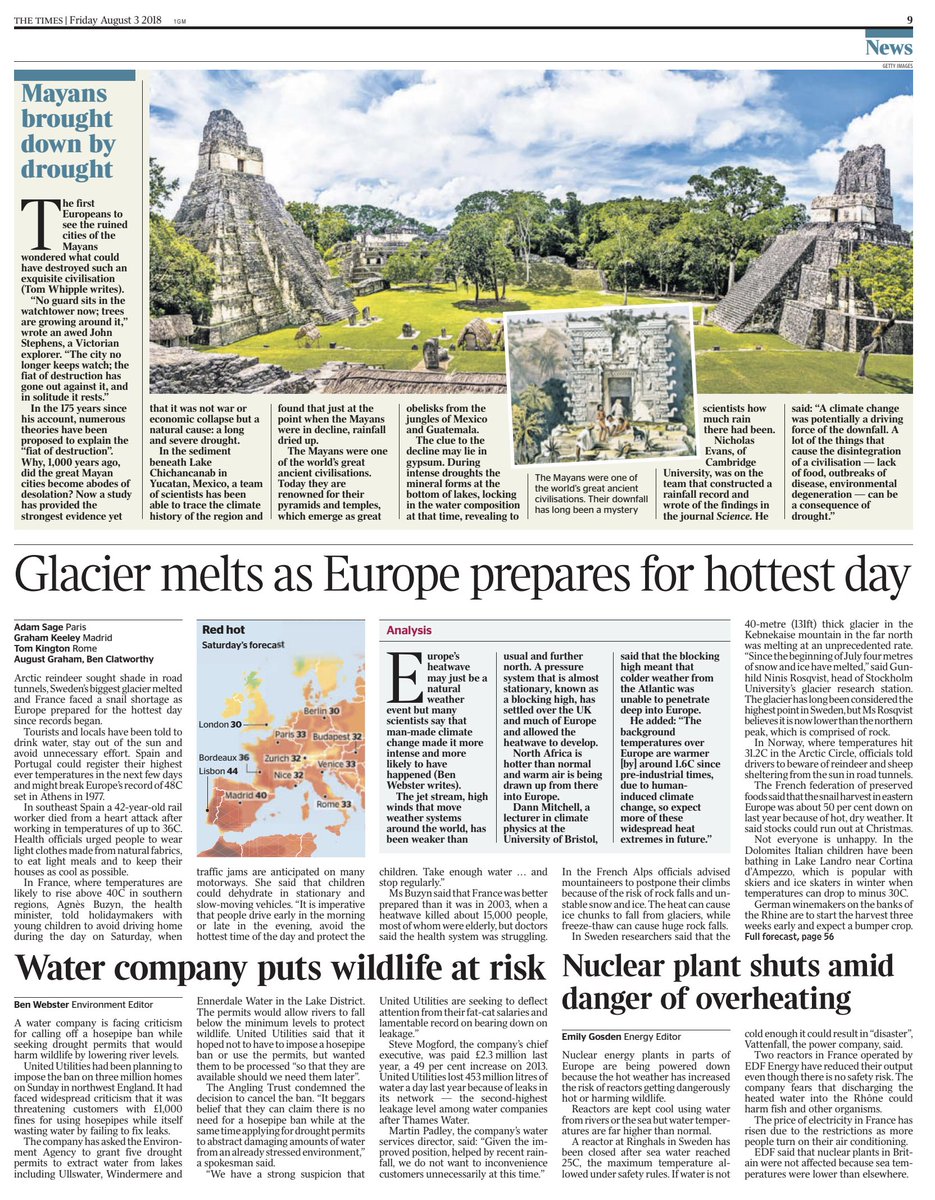 Did I fail to mention the climate change related flooding in the eastern U.S. due to odd kinks in the jet stream for this time of the year? Yes I did: