Tuesday August 21st… Dear Diary. The main purpose of this ongoing post will be to track United States extreme or record temperatures related to climate change. Any reports I see of ETs will be listed below the main topic of the day. I’ll refer to extreme or record temperatures as ETs (not extraterrestrials)😊. Here is today’s main climate change related topic:

Much has been written on how coral reefs of the oceans have been affected by warming seas due to carbon pollution. Also, every time we see a strong El Nino flair producing extra warm sea temperatures there is tremendous die off of the Great Barrier Reef corals off the northeast coast of Australia. Coral reefs also act as a global cooling agent harboring sea floura, which breaths in carbon and expels oxygen just like forests on land. At what point are the reefs hurt so much that they can’t come back no matter what happens to curbing carbon pollution efforts, tipping the planet towards accelerated warming?

Looking at Dr. Steffen’s chart we see that coral reefs are one of five factors that may already be in the process of tipping at just +1C above preindustrial conditions. I see that some already are writing off the planet’s coral reefs as doomed. Certainly any more warming going towards the Paris Accords limit of +2C will jeopardize more reefs.

Today let’s look at why coral reefs are partly responsible for cooling the planet, naturally regulating what has been a stable climate for the last several thousand years.

First let’s generally look at what coral reefs do: https://www.reefrelief.org/learn/coral-reef-ecosystem/

What is the coral reef ecosystem?

The health, abundance and diversity of the organisms that make up a coral reef is directly linked to the surrounding terrestrial and marine environments. Mangrove forests and seagrass beds are two of the most important facets of the greater coral reef ecosystem. Mangroves are salt-tolerant trees that grow along tropical and sub-tropical coasts. Their complex root systems help stabilize the shore line, while filtering pollutants and producing nutrients. Their submerged roots and detritus provide nursery, breeding, and feeding grounds for invertebrates, fish, birds, and other marine life. Many of the animals raised in mangroves migrate to coral reefs for food, spawning and habitat.

Seagrasses are flowering plants that often form meadows between mangrove habitats and coral reefs. They form the foundation of many food webs, providing nutrients for everything from sea urchins and snails to sea turtles and manatees. Seagrass also provides protection and shelter for commercially valuable species such as stone crabs, snappers and lobsters. Additionally, they filter the water column, prevent seabed erosion, and release oxygen essential for most marine life.

The ecosystem services of mangroves and seagrass are vital to the long term health of coral reefs.

Here is an intriguing aspect of the reef system that I’d never come across until now. Can the reefs produce cooling atmospheric clouds?

When the temperature soars, coral reefs might cool off by creating their own clouds.

Research from the Great Barrier Reef off the Australian coast shows that corals are packed full of the chemical dimethyl sulphide, or DMS. When released into the atmosphere, DMS helps clouds to form, which could have a large impact on the local climate.

In the air, DMS is transformed into an aerosol of tiny particles on which water vapour can condense to form clouds. This sulphur compound is also produced in large amounts by marine algae and gives the ocean its distinctive smell. Algae play a vital part in regulating Earth’s climate, but no one had looked at whether coral reefs might have a similar role.

Graham Jones of the Southern Cross University in Lismore, Australia, and colleagues measured DMS concentrations in corals in the Great Barrier Reef and its surrounding water. They found that the mucus exuded by the coral contained the highest concentrations of DMS so far recorded from any organism. A layer rich in DMS formed at the sea surface above the reef, where it was picked up by the wind.

“Although globally the emission of DMS from the Great Barrier Reef is not huge, on a regional basis it is very significant,” says Jones.

The research also raises another intriguing possibility: that coral can use a Gaia-like feedback mechanism to regulate the amount of sunlight they are exposed to. The “Gaia theory” is that life on Earth regulates its environment to keep itself healthy.

In lab experiments, Jones and his team showed that corals produce more DMS when the symbiotic algae inside their tissues become stressed by high temperatures or UV radiation. If this DMS seeds more clouds, the coral could have evolved a way to reduce the water temperature or UV exposure. “We’ve got a long way to go to conclusively demonstrate this, but we’ve got a lot of ammunition,” says Jones.

For 20 years, scientists have been hunting for evidence that free-floating marine algae can operate a DMS-dependent feedback mechanism to dampen global warming’s effects. Because reefs are a static source of DMS, it might be easier to show an effect, says Jones. “Coral reefs would be a great place to show Gaia in action,” he says. “This is the first time that processes going on in coral reefs are being connected to climatic processes.”

So, in this brief post we see that coral reefs are essential forests of the seas that literally millions of people are dependent on for their livelihoods. Perhaps due to atmospheric interactions corals are a climate cooling factor beyond just helping ocean fauna to thrive. It’s essential to help keep the coral reef system healthy.

On Wednesday more heat is slated for the West. The Midwest will continue to be the nation’s cool spot.

Chances of tropical storm conditions have increased for all Hawaiian Islands, about 50% at each location. Even without landfall of center of #Lane the S-shaped track could bring damaging winds, power outages, flooding rains, dangerous and damaging surf to portions of all islands. 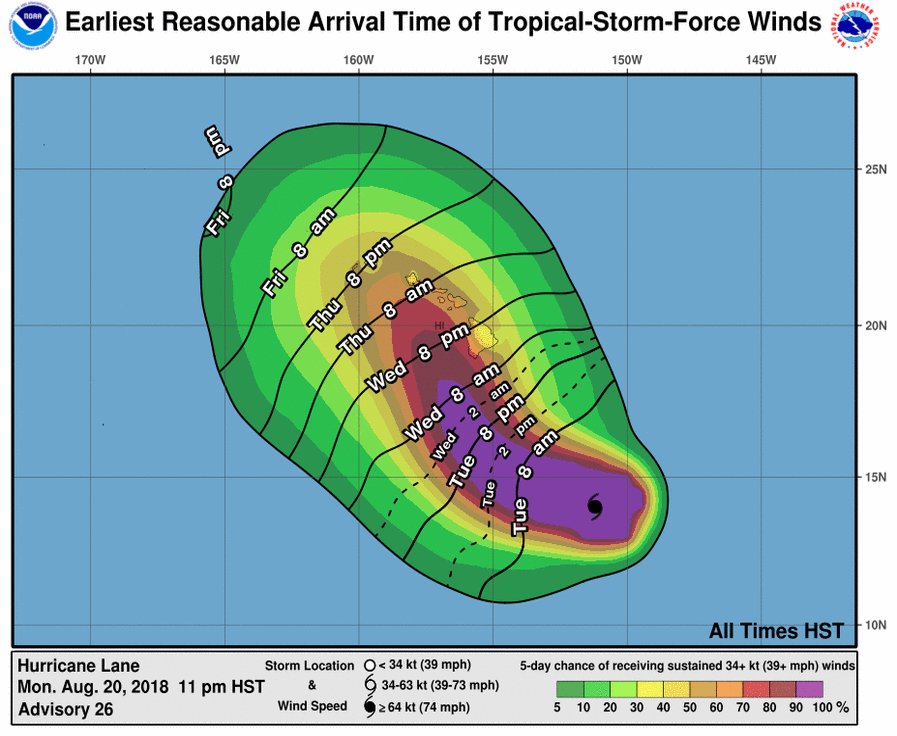 We Are Climbing Rapidly Out of Humankind’s Safe Zone

Vancouver, WA set their all-time record of 90°+F days in one year with #28 today. The old record was 27 days in 1906. #pdxtst #wawx #TheCouve
5:58 PM – 21 Aug 2018
(If you like these posts and my work please contribute via the PayPal widget, which has recently been added to this site. Thanks in advance for any support.)