Saturday August 25th… Dear Diary. The main purpose of this ongoing post will be to track United States extreme or record temperatures related to climate change. Any reports I see of ETs will be listed below the main topic of the day. I’ll refer to extreme or record temperatures as ETs (not extraterrestrials)😊. Here is today’s main climate change related topic:

As a thought experiment let’s suppose that after another few decades of fighting the good fight to stabilize the climate that scientists come to the realization that all is lost. Efforts to keep the carbon content of the atmosphere from doubling above preindustrial conditions, about 280 parts per million, have failed with the figure pushing 600 ppm due to greed and the failure of the Paris Accords among nations. Civilization is breaking down due to widespread crop failures, drought, fresh water scarcity, and storms interacting with an ever rising sea. Nation has become pitted against nation fighting over a dwindling supply of resources with nuclear war immanent. In light of such a dystopian world, what could possibly be done to preserve knowledge and the essence of the best of what the civilization post Renaissance has accomplished?

At some point scientists and any government policy makers with any residual clout may come to realize that any homo sapiens left from an ever increasingly torturous environment may devolve into ape-like forebears existing in small tribes, foraging for food using hunter-gatherer methods since even cultivation may become impossible. It may take a few million years before the climate stabilizes and cools back to where it was prior to the mid 21st century but with a totally different coast line. Keep in mind that human beings have been around for only two million years. Still, whatever beings that are left once the climate stabilizes due to natural processes will probably take a slow, arduous track to evolve back to where the Egyptians were 5000 years ago once cultivation becomes possible again. The art of communicating through reading and writing might be lost for millions of years, as well, but could come back once beings can put down new roots via agriculture. It would behoove those existing at the tail end of this civilization to send a warning to any coming thereafter not to make the same mistakes. I propose that just like Egyptians from the Ptolemaic Period a new Rosetta Stone be made just in case there is a “worst case scenario” as described by David Wallace-Wells from his New Yorker piece, the Uninhabitable Earth:  http://nymag.com/daily/intelligencer/2017/07/climate-change-earth-too-hot-for-humans.html

Speaking of “clifi or climate fiction” and science fiction in general I got this idea from the most recent incarnation of Battlestar Galactica. Sorry to give the plot away, but at the end of the last season it is revealed that the survivors of the humans fighting the Cylons do find Earth, but an Earth from about 70,000 years ago. In order for their survival the humans discard their technology so as to not be a threat to the Cylons and to be left alone. It is revealed that the survivors are the ancestors of Cro-Magnon Man who eventually rediscover how to build civilization, and yes build robots as servants that originally got the humans of the Battlestar Gallactica world in their mess in the first place. The very last scene of the series suggests that Earthlings will commit the same set of mistakes dooming the Twelve Colonies that built the Cylons creating their own sentient robots that will rebel. What if there was some way to leave a strong message to follow a different path?

First, any new Rosetta Stone would not be just a stone with different languages inscribed on its surface. Yes, it may have simple languages for those getting up to Napoleonic levels of learning for beings to decipher but also contain computer chips or engrams storing the breadth of this civilization’s knowledge and history, similar to what we put on the Voyager spacecraft in 1977 via a golden record disc. The stone would need to be constructed in such a manner to survive millions of years of pummeling using extremely resilient materials. To insure that its message be discovered numerous nearly identical stones could be placed across the planet. A stone could be put in a giant seed store already constructed in Norway keeping in mind, though, that this particular facility might be raided out of desperation then long forgotten: https://www.croptrust.org/our-work/svalbard-global-seed-vault/

It would be crucial  for a future civilization to discover what exactly is said on these stones in order for their people not to build any more Cylons…in this case coal driven locomotives, gasoline powered automobiles, and power plants and factories belching carbon. A future civilization would need to enter its industrial age on green power. Ironically the Rosetta Stone was discovered by Napoleon’s army just at the dawn of the Industrial Revolution leading the way towards deciphering Egyptian hieroglyphics. Those new stones need to be decipherable from a civilization with about as much knowledge as ours from about the year 1800.

So how would this letter to the future read? Here is my short but not so sweet take:

This is a dire warning.

Do not burn coal and oil to power any machines you invent to make your lives easier. On this tablet you will find described a very good reason why….the greenhouse effect. Smoke from the burning of coal and oil emits carbon, which changed weather such that our way of life could not survive, eventually nearly destroying us. Here are instructions on how to build windmills, solar cells, and batteries for all of your power needs so that you too won’t go down a road to doom.

The burning of fossil fuels was responsible for killing over 10 billion beings like yourself and countless species of animals and plants across Earth. We could not sustain our civilized way of life and culture. After creating great wealth and comfort for a few hundred years the burning of fossil fuels doomed mankind to lose any progress towards branching out into space and created much suffering and hardship.

Those Who Were Warned And Should Have Known Better

(Drop me a note if you think I should write this letter to the future differently.)

Please keep in mind that this post is just a thought experiment. Humans are a very resilient species that should be able to intelligently overcome the climate crisis. This post is not meant to make people throw up there hands thinking there is nothing that can be done, suggesting that we might as well not change and continue our polluting ways. I dearly hope that those in charge in say the year 2050 don’t feel the necessity to create these news Rosetta Stones because of our green actions today.

Sunday more marginally dangerous heat will build across the Plains and South:

#Lane‘s incredible rains: Though it never made landfall, the storm dumped more than 40″ on the eastern Big Island of Hawaii and gave Hilo its wettest three days on record. https://bit.ly/2ohh1IN 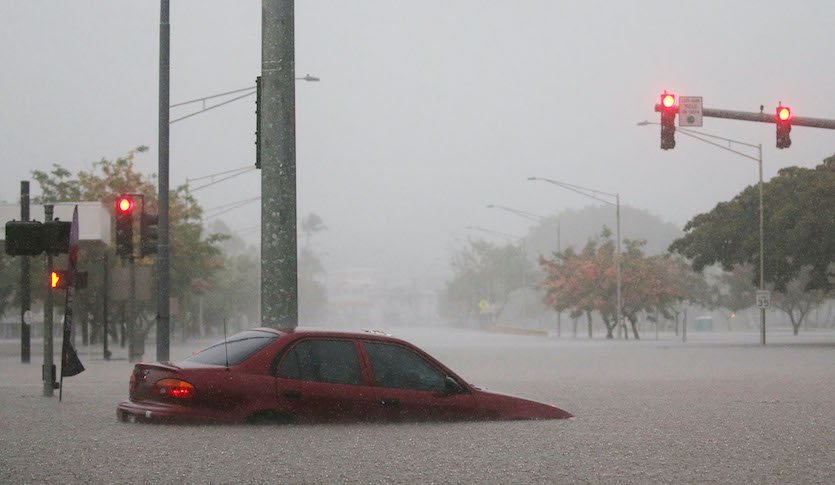 Here’s what Hilo looked like after #HurricaneLane dumped rain on the Big Island yesterday. Some parts got over 30 inches of rain! (Image courtesy: Tracey Niimi) 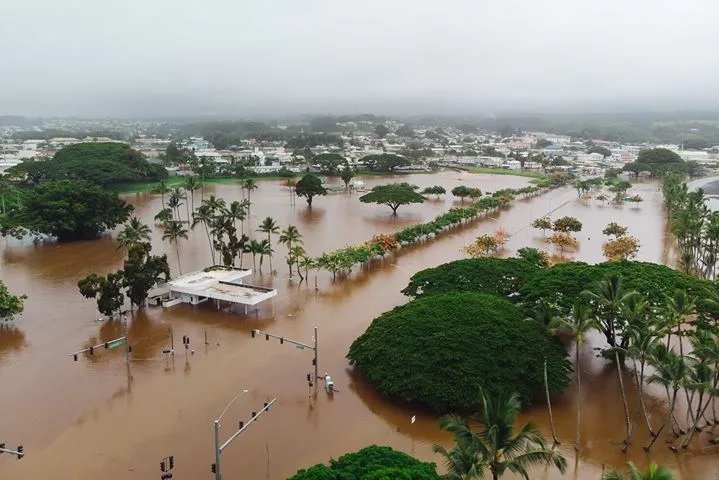 This chart documents how #wildfires in California caused a spike in the state’s carbon dioxide emissions.

@bberwyn reports how these greenhouse gases will warm the planet well into the future: http://bit.ly/2LnthQV 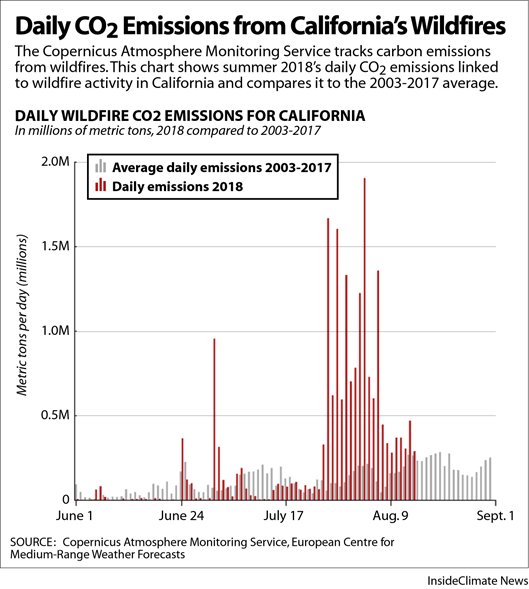 The human role in this summer’s heat. (Click on the picture to see the article.)

Bulls-eye on the SW – 18 yrs of drought & counting. Megadrought if it goes another 2 years, & it likely will. Why? Global warming is increasingly driving the drought. Of course, that means it’s aridification? Probably a bit of both, & any way you look at it, not good for the SW. 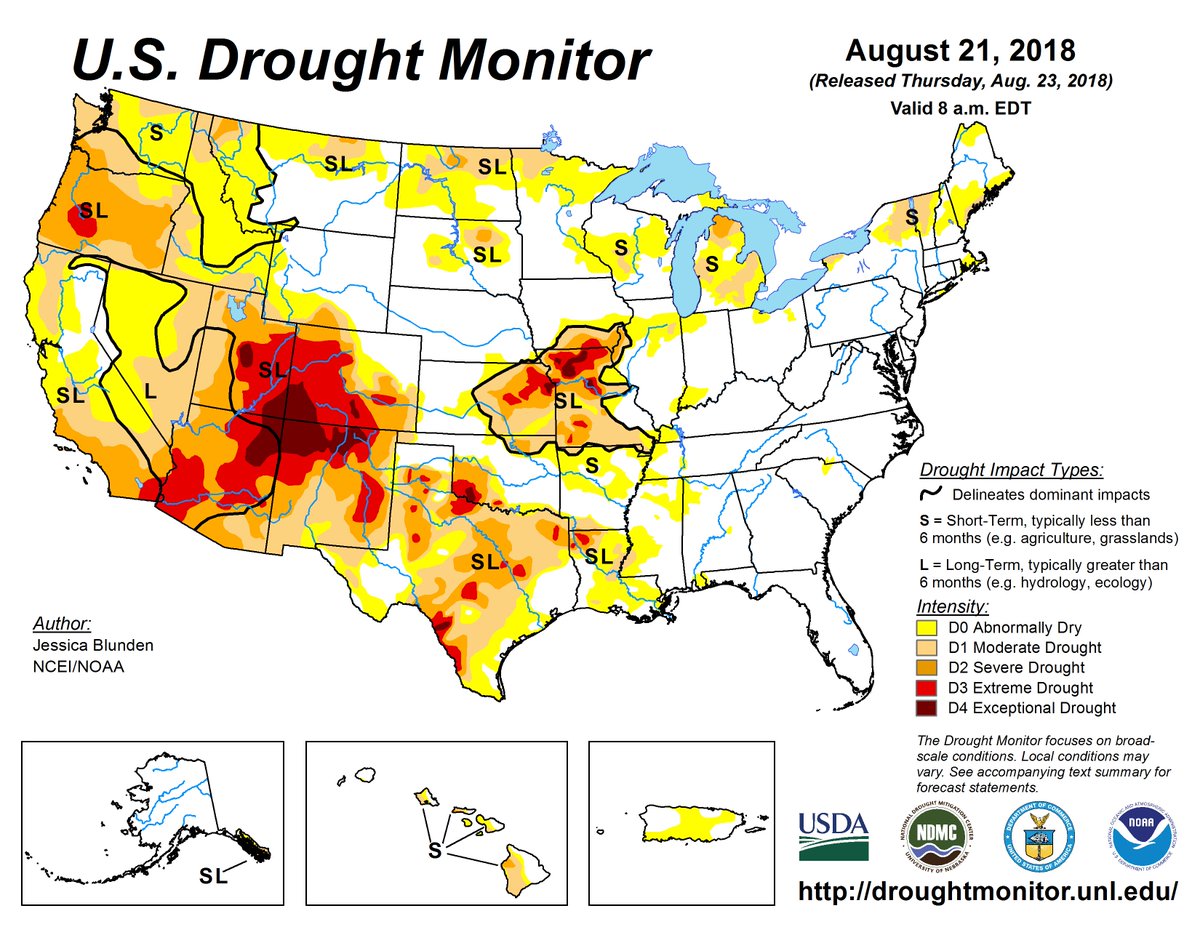 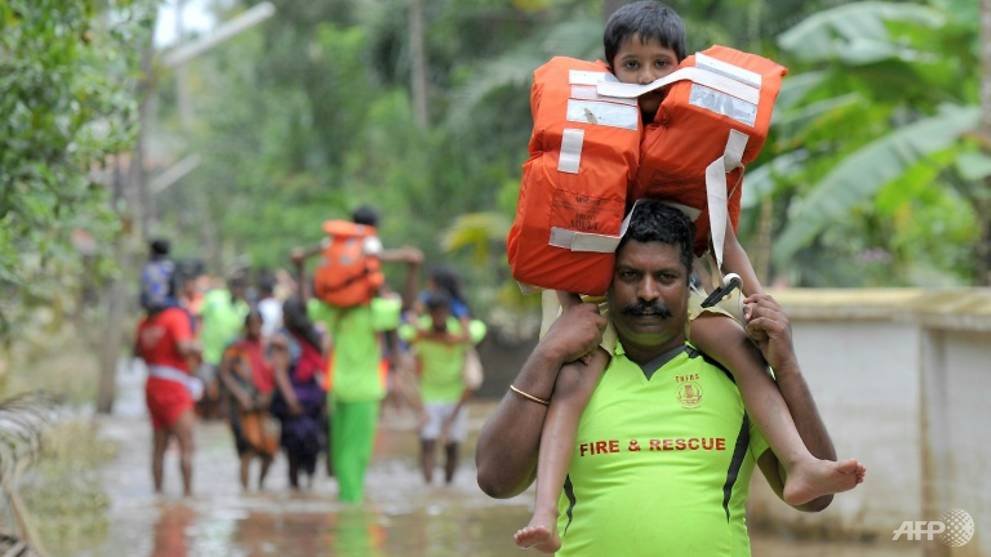 TERRIFYING: Some of the oldest ice in the Arctic is now breaking apart http://ow.ly/fzpC30lynWy  via @NPR 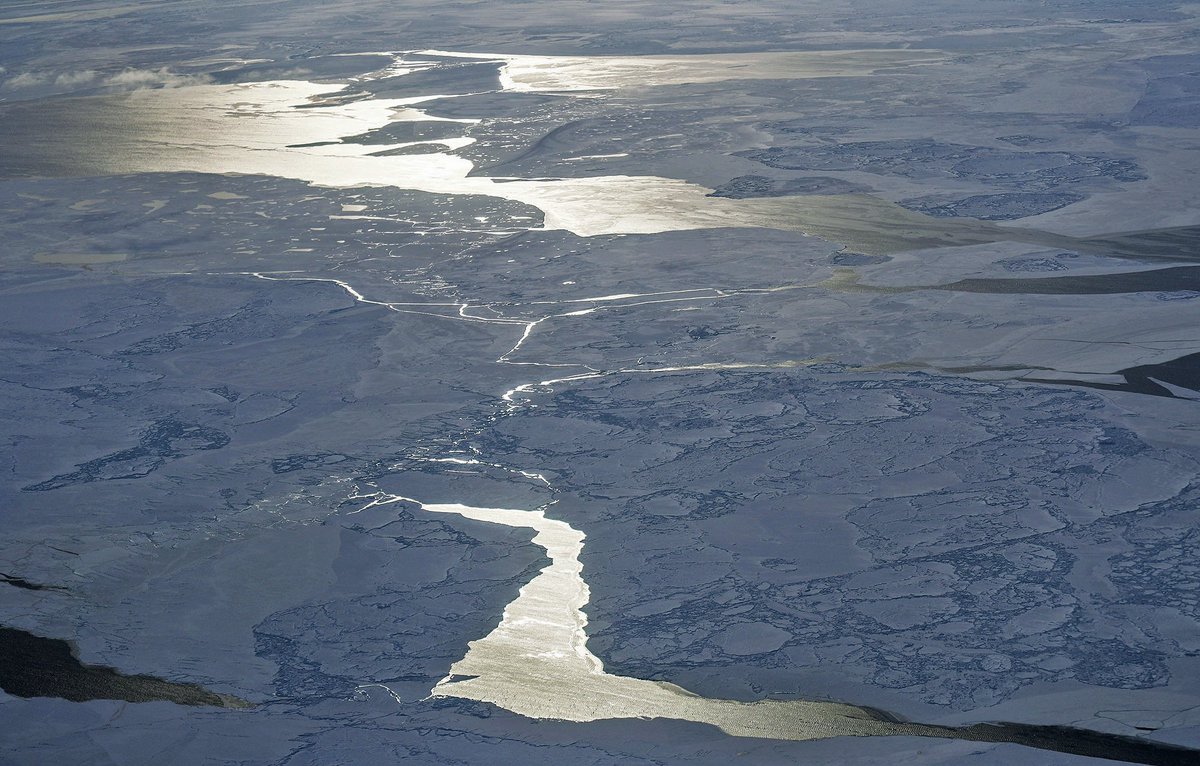 Scientists have developed a lab-made mineral that’ll suck CO2 from the atmosphere
http://on.forbes.com/6016DvO4s 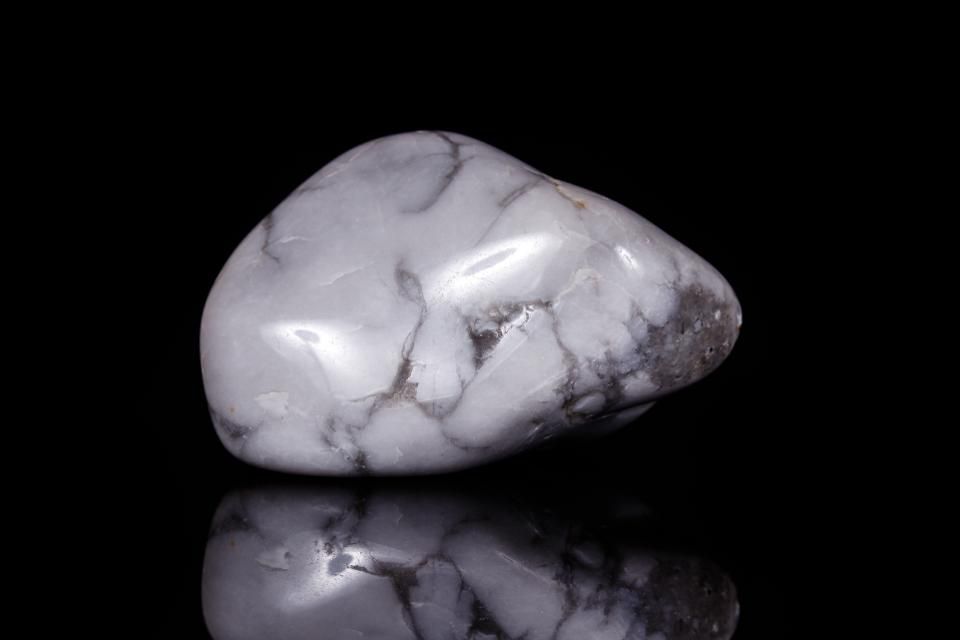